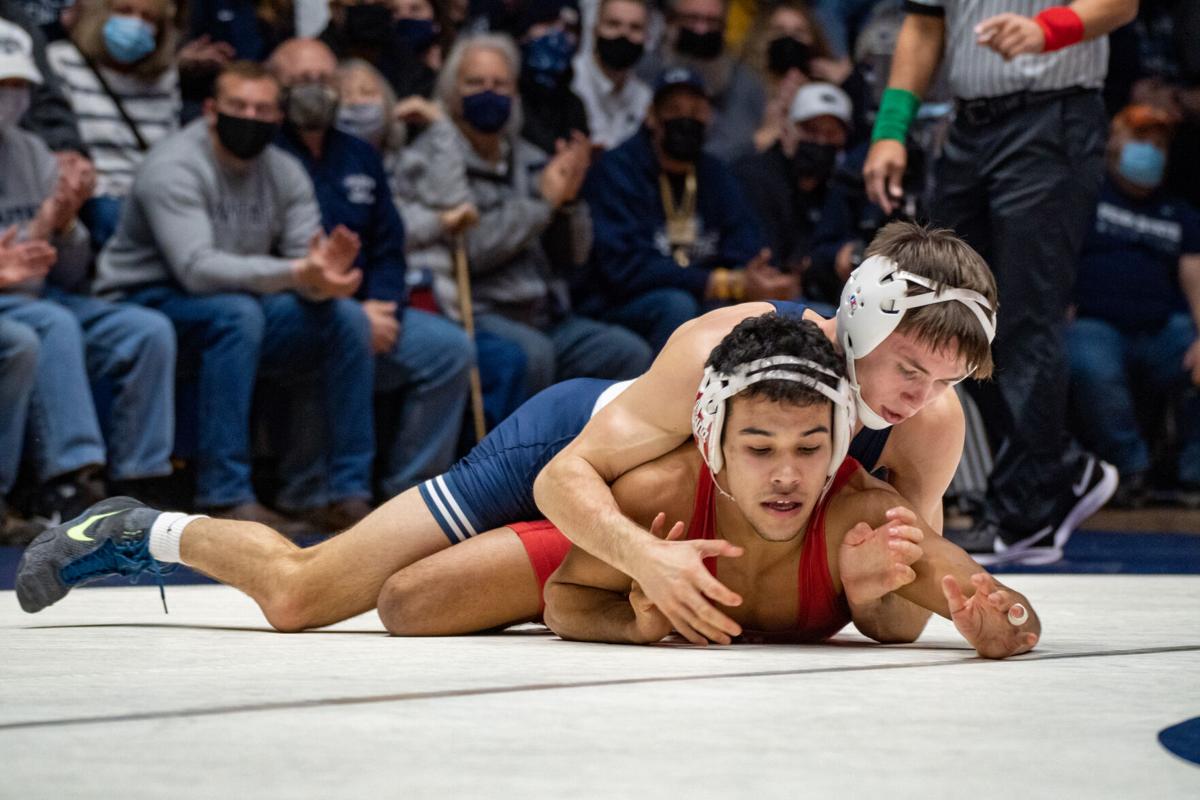 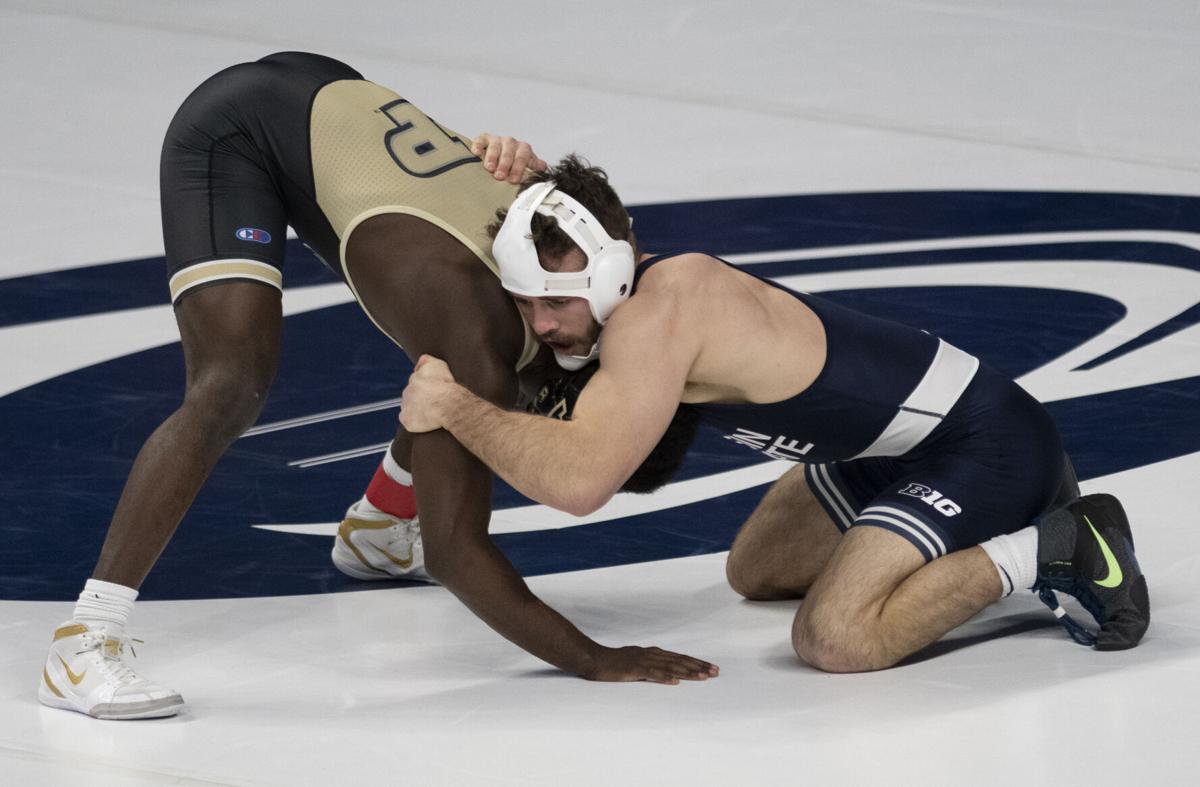 The 2021-22 wrestling season has already been one of the more eventful campaigns in recent memory — yet the best teams in the premier wrestling conference have not even wrestled each other.

Both injuries and transfer additions have set the college wrestling world on fire during the dawn of the season, setting up what could be one of the most exciting NCAA team-title races in the history of the sport.

The defending national champions, the Iowa Hawkeyes, began the season as favorites to repeat but have had a rough start healthwise.

Describing the loss of the defending Hodge Trophy winner as a big blow to the team would be a massive understatement.

During the Hawkeyes’ title run last season, Spencer Lee outscored his opponents 59-8 and picked up bonus points in all of his matches except the final.

However, Lee’s injury may not actually be the end of the world for Iowa thanks to the rise of freshman Drake Ayala.

The Fort Dodge, Iowa, native has picked up several statement wins after unexpectedly being slotted into the lineup, besting newly ranked No. 14 Devin Schroder of Purdue and No. 19 Noah Surtin of Missouri.

Iowa also received an injury scare stemming from ing All-American Michael Kemerer’s shoulder, but it appears that the Murrysville, Pennsylvania, native is at least healthy enough to compete at the moment and will likely continue to improve throughout the season.

Also within the Big Ten, Michigan has emerged as a legitimate title threat thanks to the additions of Patrick Brucki and Nick Suriano.

Suriano has gotten off to a great start to the season and has claimed the No. 1 ranking in the 125-pound weight class due to Lee’s injury, while Brucki has also started off hot with a win over 197-pound NCAA finalist Nino Bonaccorsi.

With a few timely upsets, Michigan now most definitely possesses a depth of talent capable of taking down the two top teams in the Big Ten and may even have a bit of a home-gym advantage at the NCAA Championships in Detroit this spring.

The true might of this Michigan team will be tested shortly as it hosts the No. 1-ranked team in the country on Jan. 21 — Penn State, who like the aforementioned teams also made a number of big moves recently.

Entering the season ranked second overall, Cael Sanderson’s team had a bit of work to do to catch up to top-ranked Iowa.

What ultimately led to the Nittany Lions vaulting into the top spot was the addition of Central Michigan transfer Drew Hildebrandt to the roster at 125, coupled with Lee’s injury at the same weight class.

Hildebrandt’s success has varied in his young Penn State career, pinning an unranked opponent in Maryland’s Zach Spence and earning just a decision over  No. 33-ranked Jacob Moran of Indiana.

At a weight class where the blue and white has struggled to score points at the NCAA’s in recent history, Hildebrandt could be the piece that pushes this Penn State team over the edge.

However, Lee’s injury doesn’t totally open the door for Hildebrandt even just inside the Big Ten, as he was bested by Minnesota’s Patrick McKee in the third-place match of last season’s NCAA Tournament after losing to Lee in the semifinals.

The Big Ten also hosts the No. 1 and No. 7-ranked 125-pound wrestlers in Suriano and Northwestern’s Michael DeAugustino, respectively.

Currently, Hildebrandt is the No. 9 wrestler at 125 pounds, but he will have a substantial opportunity to increase that ranking in the near future, as he’s set to square off with Suriano when Penn State travels to Michigan.

Perhaps the most unexpected move of the season so far came in the form of Brady Berge ing to wrestle for the Nittany Lions after medically retiring from the sport and taking a coaching job at South Dakota State.

Berge is expected to take the 157-pound spot in Penn State’s roster at some point during the season, but there is no official timetable for his return yet.

Three Nittany Lion Wrestling Club members, one of them a former Penn Stater, earned a chance…

Sanderson said it’s up to Berge to decide when he feels ready to go but also said he doesn’t expect fitness to be a problem for Berge, as assistant coaches often do more wrestling than the athletes themselves.

With Berge’s , the blue and white now has a potential All-American at every roster slot except 165 pounds, barring a spectacular second half of the season from junior Creighton Edsell, who has wrestled well at 165 and is currently ranked 24th.

Overall, it’s clear that Michigan, Iowa and Penn State each possess talent that’s at least in the same ballpark, placing each team well within striking distance for a Big Ten title or NCAA team title.

At this point, Penn State is a slight favorite according to many wrestling analysts; however, as fans saw last season when Penn State secured four individual NCAA titles — anything can happen.

A few surprise champions or an injury to a top wrestler could easily tip the balance in the favor of any one of these three teams.

That’s especially true in the current landscape of college wrestling, where the NCAA Tournament could be as competitive as ever with a surplus of talent present in the sport this year due in large part to the coronavirus and Olympic redshirts or Ivy League wrestlers ing after their 2020-21 season was canceled.

Many weight classes have dominant first- or second-ranked wrestlers, but these same weights also have a plethora of talent rounding out the top 10, making All-American spots that much harder to come by and creating a team-title race that’s sure to be as exciting as any in recent history.

For now, each of these teams will just have to focus on getting to March. Afterall, they each have to go through the gauntlet that is the Big Ten regular-season schedule — a task that has created battle-tested rosters year after year and produced the last 14 NCAA team champions.

Fans will just have to wait until March to see if any of these teams will make it 15.

One of Penn State’s NBA representatives has been heating up as of late.

It’s no secret that the 2021 season was one Penn State would like to put behind it.

No. 1-ranked Nick Lee out for Penn State wrestling against Rutgers

Penn State will be without Nick Lee for a second straight match on Sunday.

Penn State once again took care of business against a Big Ten opponent, this time taking down its best conference foe to date — Rutgers.