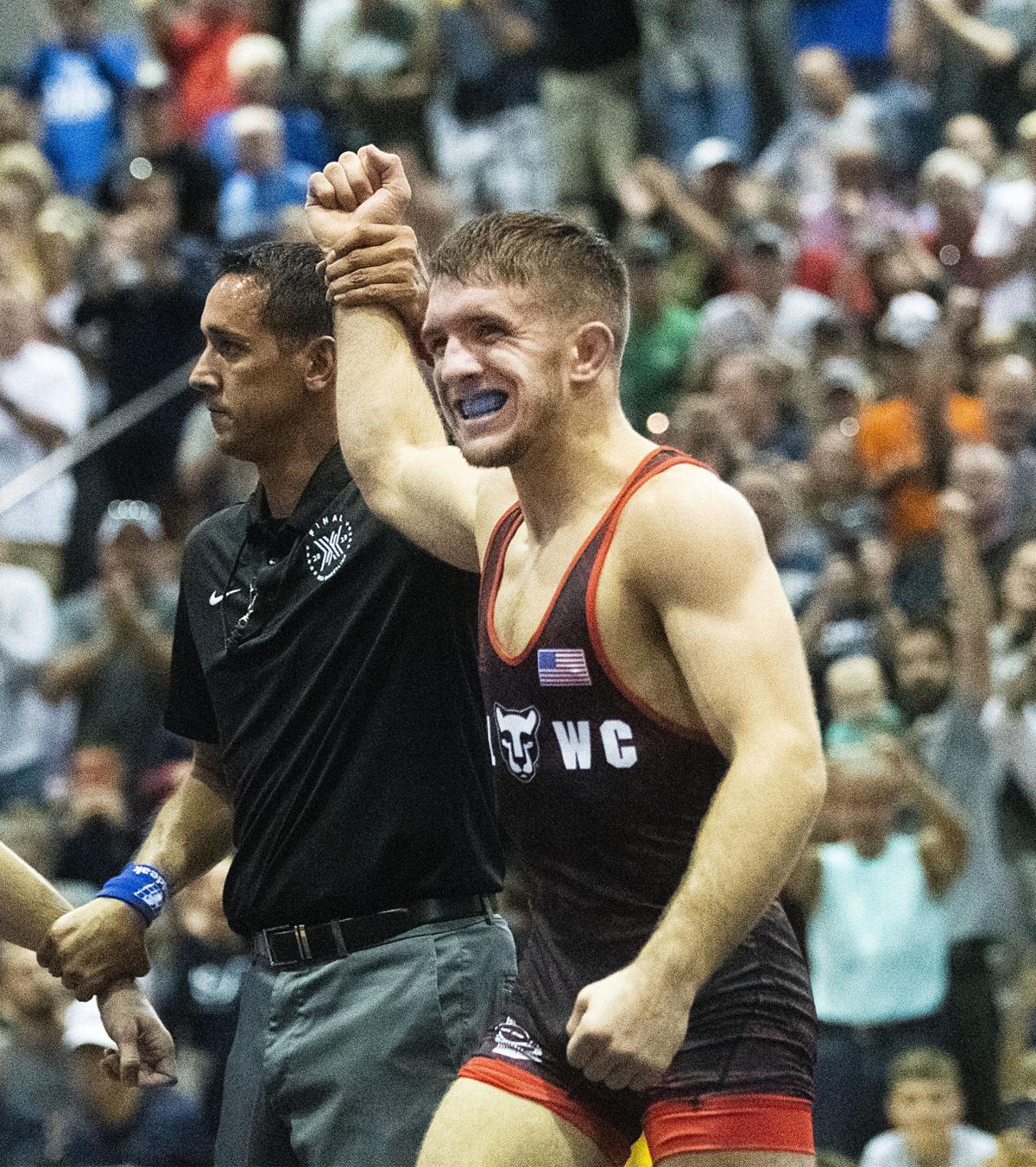 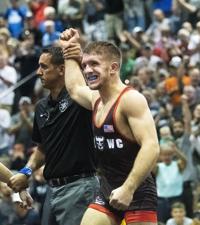 Zain Retherford is announced the winner of the 65 kg wrestle-off at Wilkes University on Monday, September 2, 2019. Retherford defeated Yianni Diakomihalis 2-1. 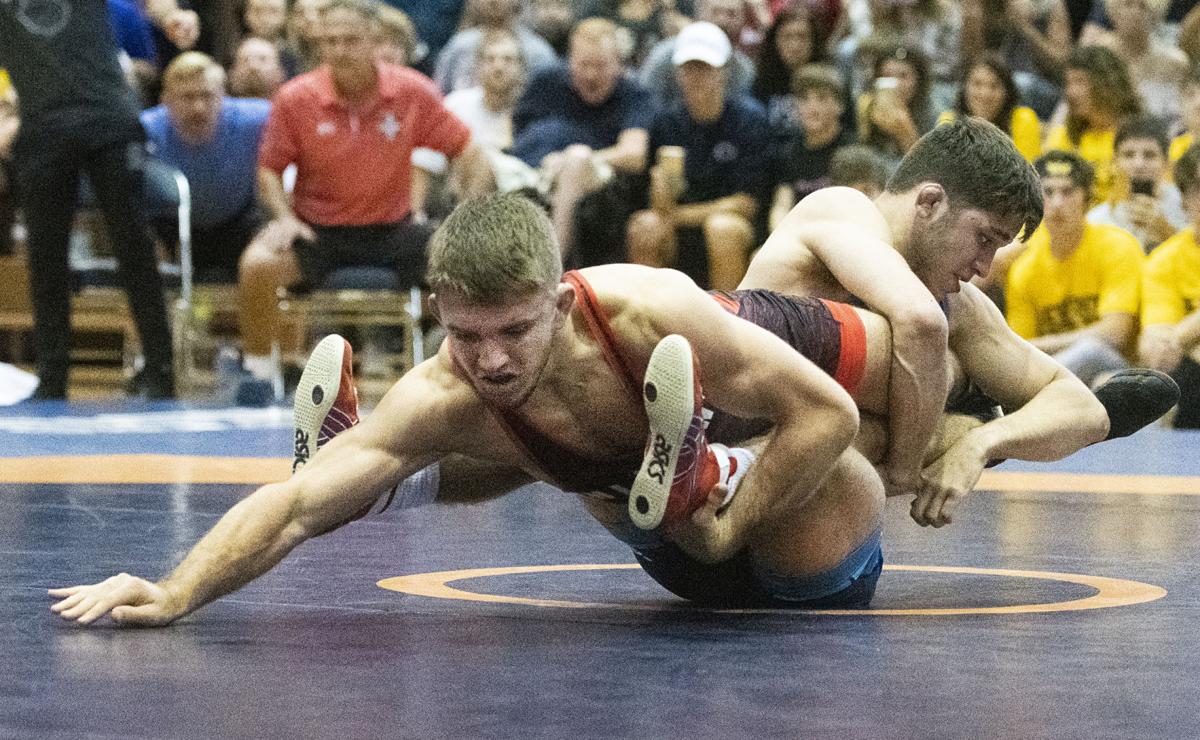 Zain Retherford tries to get out of Cornell’s Yianni Diakomihalise’s hold at the 65 kg wrestle-off at Wilkes University on Monday, September 2, 2019. Retherford defeated Diakomihalise 2-1.

And yet, the former four-time All-American and three-time NCAA champion for Penn State, who's wrestled in a wrestling cathedral like Rec Hall, couldn't help but get emotional after a nearly four-month long saga that ended with him retaining his spot on the United States World Team at Wilkes University on Monday.

That's because it's not the number of people that got to Retherford when he wrestled, but rather who was in attendance.

The two-time Hodge Trophy winner was always grateful and appreciative of the Penn State fans that constantly cheered him on during his time donning a blue and white singlet, but Monday's crowd meant a bit more.

You see, Monday's crowd consisted of the usual Penn State faithful, but it also included many people from Retherford's hometown of Benton, Pennsylvania which boasts a population of under 1,000 people.

Roughly 40 minutes away from the small farm town, wearing bright orange shirts, the Benton natives made their presence known and their pulling for him clearly affected the normally stoic and even-keeled Retherford.

"I almost started tearing up when we got out there," Retherford said. "Honestly, I don't usually get emotional, but I just know like half my town's here and just hearing them scream brought back a lot of memories and I'm just really grateful for it."

Before Retherford could have his town rally behind him though, he first had to get to this point.

Retherford originally beat Cornell's Yianni Diakomihalis two matches to none at Final X: Rutgers on June 8 to claim the 65 kg spot on the United States World Team, however, Diakomihalis and his camp protested a challenge call at the end of the second match.

The protest of the match led to a subsequent arbitration hearing where it was ruled Retherford and Diakomihalis would have to re-wrestle the second match, which Retherford would enter with a 1-0 series lead.

That's the gist of a saga which started four months ago and ultimately needed just six minutes on Monday to come to a conclusion.

But there Retherford was in June, poised to represent the United States on the world stage for the second time in his very decorated career, only to have factors outside of his control dictate his fate.

To outsiders, it might seem unjust that a non-wrestling body rendered a verdict with such ramifications or that the process dragged on for what many believed to be an inordinate amount of time.

Retherford however, viewed it as an affirmation of something his coach, Cael Sanderson, told him a long time ago about the momentary nature of success.

"Coach Cael once said to me that winning a national title is like having a bouquet of flowers. It's beautiful and everyone is surprised and says 'Oh these are beautiful flowers' for a week or so and then they wither up and die you've got to get a new set of flowers," Retherford said prior to his original Final X victory.

Perhaps it was the experience of having to defend three NCAA titles and four Big Ten titles over his college career which has allowed Retherford to think this way.

Maybe there actually was an inkling inside of Retherford where he thought his Final X win and World Team spot might be contested and that he'd end up in this situation.

But even if Retherford thought he'd somehow be wrestling again, he never envisioned it would be such a homecoming.

"Every match that I've had, I tried to visualize it and I've had a lot of time to think about this one. You know, me stepping out there was way more than anything I could visualize it to be," Retherford said.

Zain Retherford helped put Benton, Pennsylvania on the map as a wrestler.

Now, the town that gave so much to him and caused the "Zain Train" to come off the metaphorical tracks, stop rolling along and slow down to show some emotion, could largely be responsible for Retherford putting the United States and Nittany Lion Wrestling Club on the map at 65 kg.

"Like I said, a lot of my people could be here and, you know, with me graduating from Benton, which is 40 minutes down the road, I never would have thought something as big an event as this would happen pretty much in our backyard."