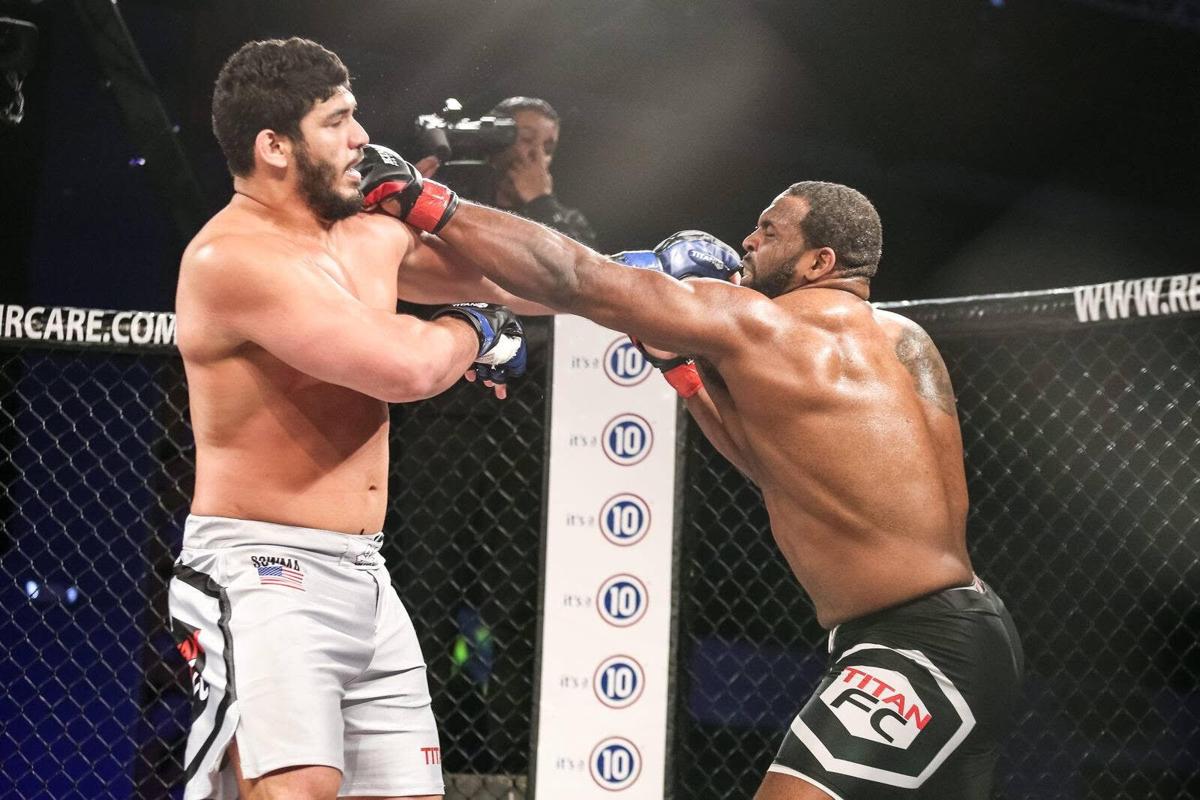 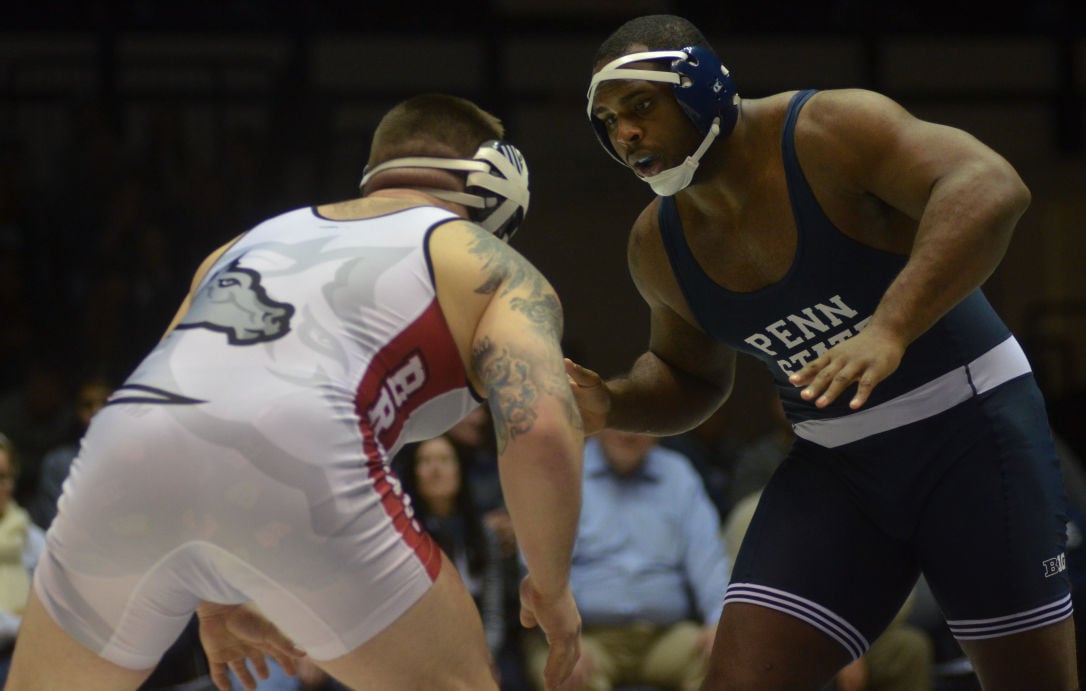 Jimmy Lawson prepares to grapple with Rider's Greg Velasco. Lawson won his bout 12-4, following a winning trend on the day for the Nittany Lions. 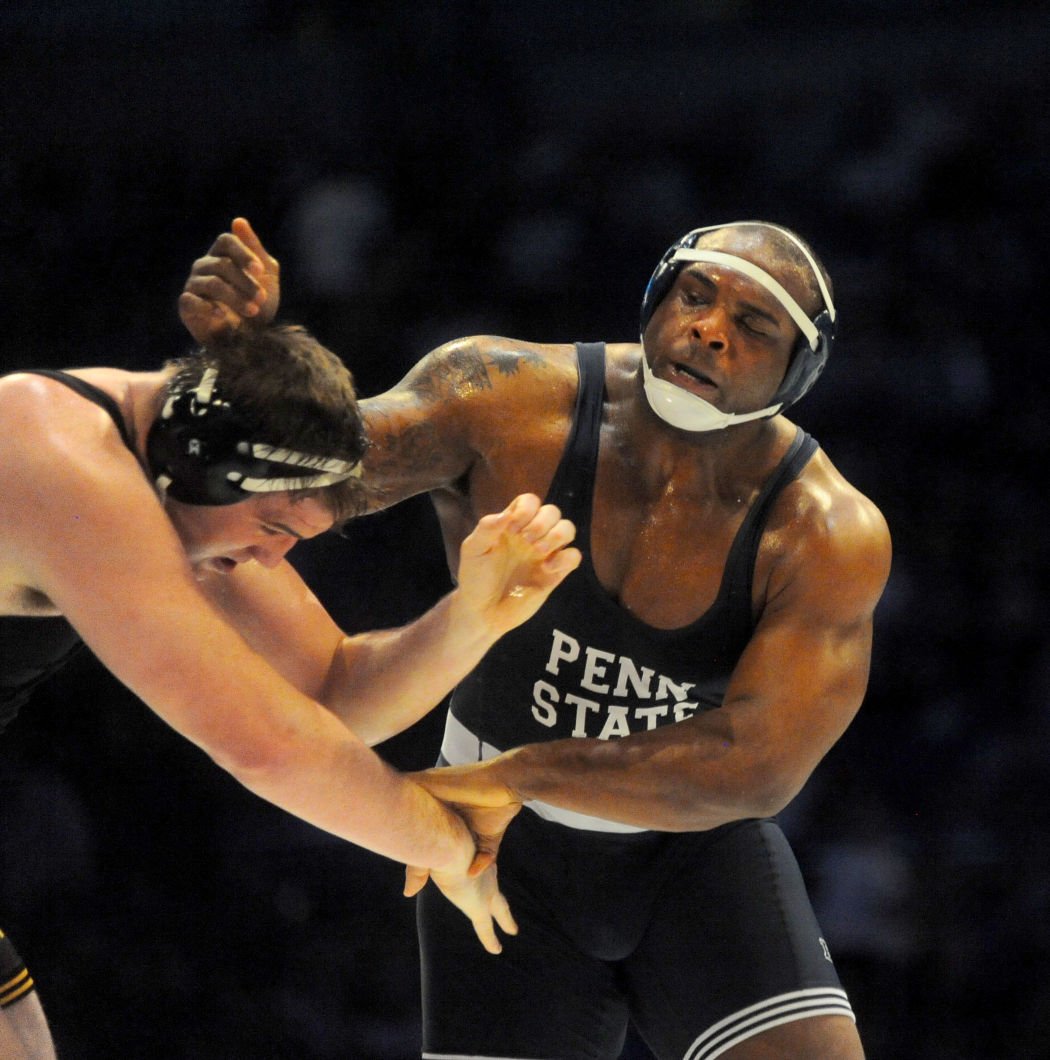 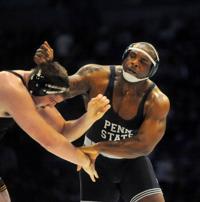 Penn State's Jimmy Lawson grapples with Iowa's Bobby Telford in the 285 lb. weight class during a match at the Bryce Jordan Center on Sunday, Feb. 8, 2015. 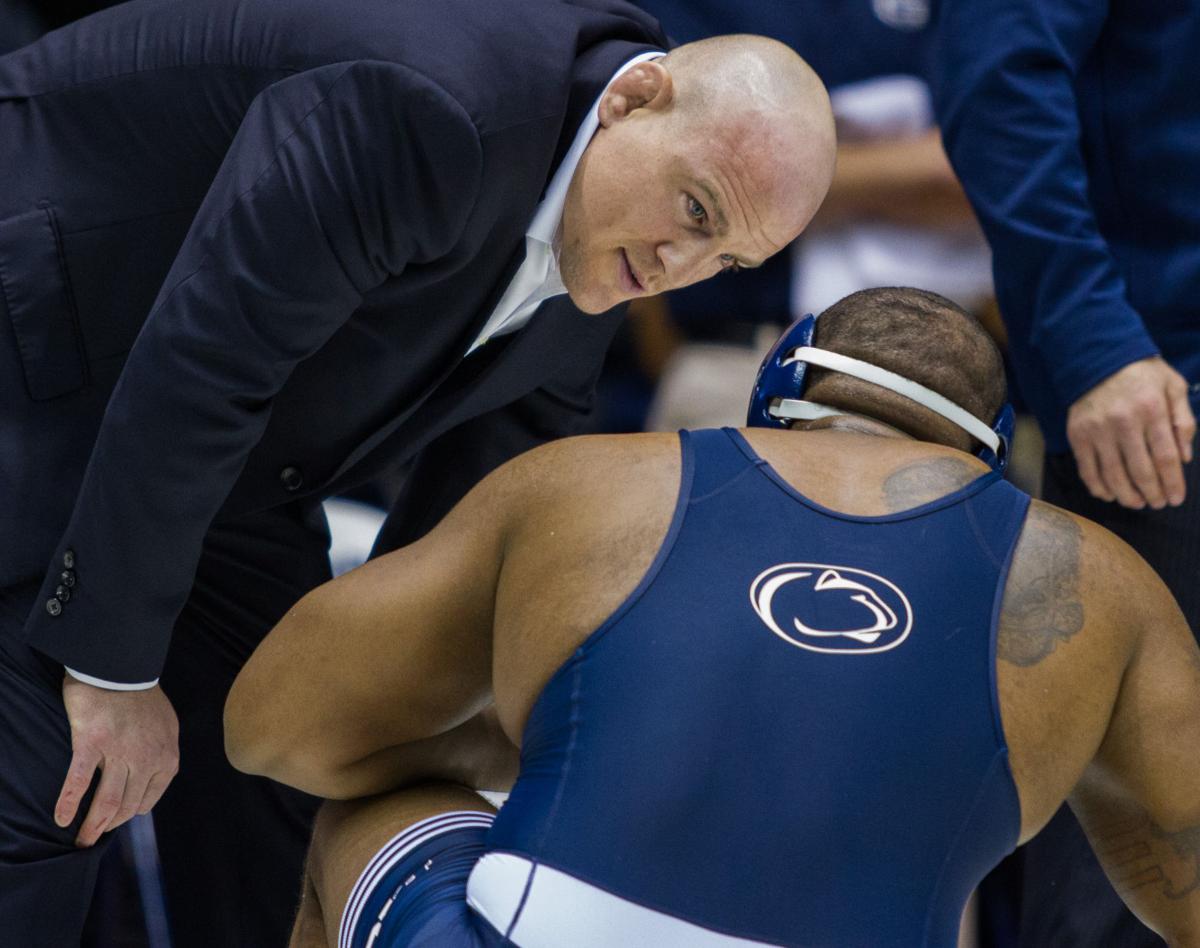 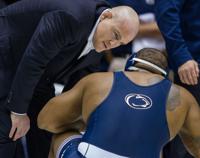 Head coach Cael Sanderson talks to Jimmy Lawson before the start of the sudden victory period of the 285 pound bout during a dual against Virginia Tech at Rec Hall on Friday, December 19, 2014. 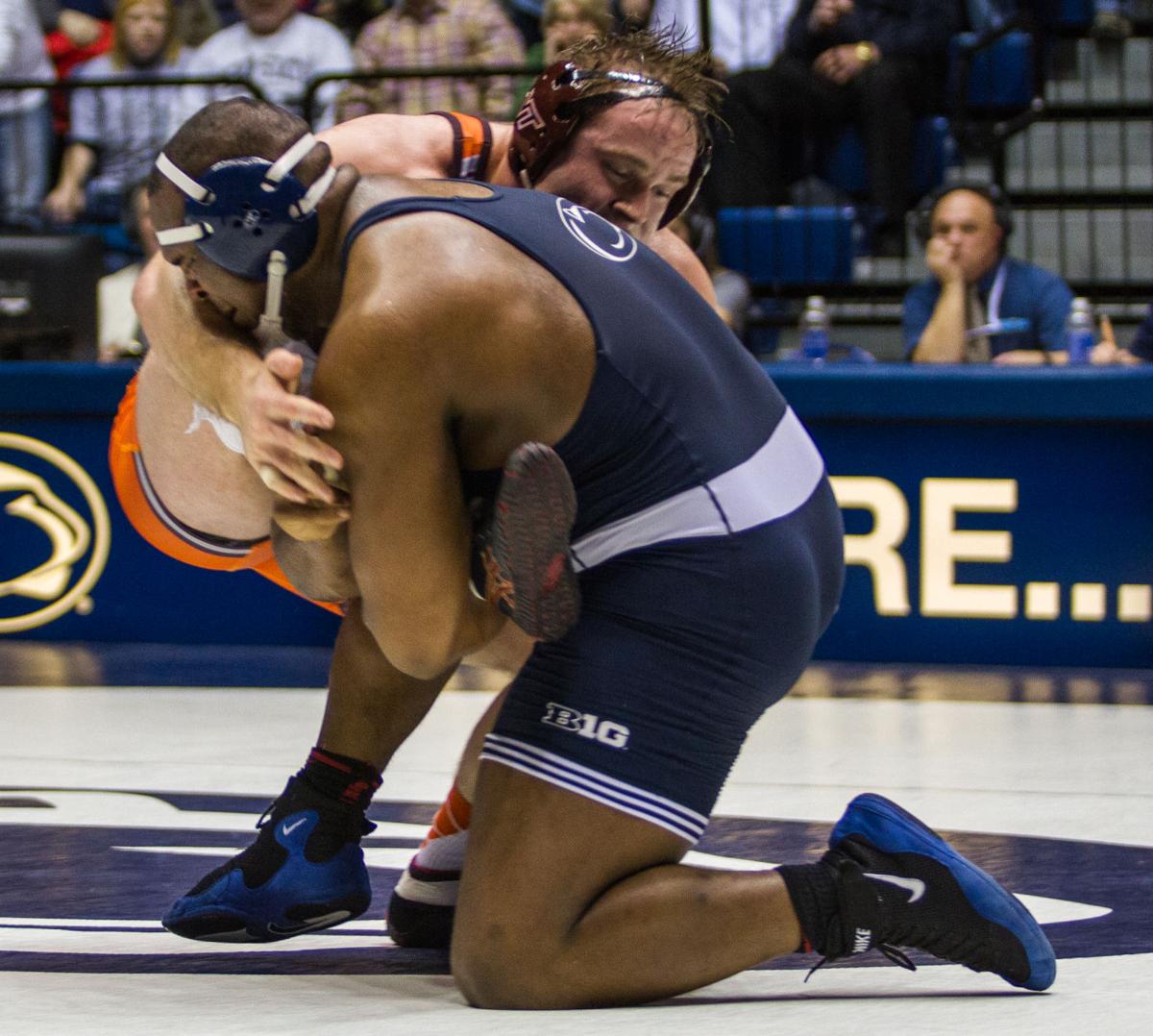 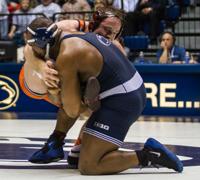 Jimmy Lawson goes for the takedown and the win during sudden death overtime against Ty Walz of Virginia Tech during a dual at Rec Hall on Friday, December 19, 2014. Lawson defeated Walz 5-3 and Penn State defeated Virginia Tech 20-15.

Jimmy Lawson may now be an MMA fighter with lofty goals, but his journey to the cage began when he was considered one of the top high school wrestlers the state of New Jersey had ever seen.

A gifted athlete, Lawson not only excelled on the wrestling mat at Penn State, but he showed talent at football too — playing both sports at the Division I level in his collegiate career.

From a young age, Lawson was surrounded by the sport of football as his father played collegiately for Bowie State and his cousin-in-law Tyronne Drakeford played professionally for the San Francisco 49ers.

“[Football] was something that just stuck with me growing up,” Lawson said. “It was the first sport I really was introduced to, and my family are all die-hard Steelers fans. Football is just a big part of my family.”

Despite his love for football, Lawson got into wrestling in the eighth grade.

Growing up, Lawson found himself getting into fights and saw the sport as a potential outlet for anger. Thanks to a middle school coach, he got into wrestling.

“I was a good kid, but when I was growing up, I used to get into fights,” Lawson said. ”I've always been a big kid, and Pop Warner football wasn't always available to me because they have a weight limit, so [my coach] thought wrestling would be a great opportunity for me to deal with some of that aggression.”

The heavyweight would pursue and continue to excel at the sport, winning three high school state championships. His success left his teammates and coaches marveling at his talent and ability.

Scheffler was quick to recognize what a special talent he had in Lawson.

“Talent wise, he's definitely No. 1,” Scheffler said. “There were some great athletes that came through Manchester, but Jimmy was different to me. He was very different and his talent was superb, especially for a heavyweight. He was not normal.”

It was the style in which he wrestled, according to Scheffler, that made him so successful at his weight class. The skillset he possessed was considered unique for a wrestler of his stature, allowing him to do things on the mat that not all heavyweight wrestlers could.

“When you look at those heavyweights for a couple years, you started seeing them getting shorter and faster, '' Scheffler said. “He was not a tall heavyweight, but he has so much power.”

However, despite his success during a four-year career at Manchester Township where Lawson was the first heavyweight to win three consecutive state championships since the World War II era, it was not until his junior year that he even considered pursuing wrestling in college.

Throughout high school, Lawson focused primarily on football and prioritized coaches and colleges that were interested in his gridiron skills rather than his wrestling talents.

“Until that point I was always playing football,” Lawson told The Daily Collegian. “ When the time came to decide what I was going to do for college, I just decided to do football first and always thought that the opportunity would come again if I decided to wrestle.”

Much to the displeasure of Scheffler, Lawson’s dreams of potentially playing professional football one day outweighed his desire to wrestle in college.

Scheffler said he understood why Lawson wanted to go out for football but tried showing him that there were college wrestlers who tried out with professional football teams.

“I told him, ‘Jimmy, you can wrestle anywhere in the country if you decide to and any school would want you,’” Scheffler said. “‘You just have to let me know and I'll set it up,’ but he wanted to play football and I understand that.”

In both his freshman and sophomore seasons, the defensive lineman appeared in 10 games for head coach Kevin Callahan, and, over the course of those 20 games, compiled 40 tackles and 4.5 sacks.

“He was an extremely hard worker. He is a very motivated and driven athlete,” Callahan told the Collegian. “He wants to be successful, but he wasn't afraid to put the work in that it requires to be successful.”

Despite being a football coach for over 40 years, Callahan was able to recognize how Lawson’s wrestling background benefited him on the football field and vice versa.

“I think the balance and the aggressiveness and the quick hands and quick feet that make you a successful wrestler also attributed to him being successful as a football player,” Callahan said. “When you combine the outstanding strength that he had with that and his compact body that he played with, he was able to generate a lot of power and a lot of explosiveness.”

Over the course of Lawson’s two seasons, the Hawks went a combined 8-14.

After a lack of overall team success and a personal dilemma, Lawson decided to return to wrestling and pursue a transfer.

“I kind of had to figure myself out,” Lawson said. “I was not as serious with my studies at Monmouth University, and it was kind of close to home. Sometimes it's good to get away from your friends and family so you can grow.”

After playing football at Monmouth and stepping away from wrestling for two full years, Lawson still kept tabs on wrestling at the collegiate level, and that’s part of what made him so surprised when Penn State’s Cael Sanderson came calling.

“My parents had called me saying that Cael Sanderson was on the way to the house,” Lawson said. “When I had decided to go back to wrestling, I obviously was paying attention to what was going on in the college world and remember watching David Taylor and Ed Ruth, the dynamic duo, as freshmen.

“I got to see that, and being at that university, meeting those guys and being a part of the team was a surreal experience because I just watched them win the national title the year before.”

It did not take the former New Jersey state champion long to commit to Penn State, but he knew this commitment was much larger than just a return to the sport of wrestling — it was a commitment to a different lifestyle.

“What you're signing up for is going to challenge you and test you,” Lawson said. “To this day I haven't been tested nearly as much as I was at Penn State. That's a testament to Cael’s own accomplishments. That coaching style is something I'm grateful for because not many people get to experience that.”

During his time at Penn State, Lawson saw a great deal of success.

Over the course of his two seasons as a Nittany Lion, Lawson helped his squad win two national championships and earned All-American status in 2015.

Having such a talented team helped motivate and push the All-American in ways he had never been before.

“On those Penn State teams alone we had four or five kids ranked number one in the country,” Lawson said. “At my time at Manchester Township or Monmouth, I had maybe one or two guys who were getting looks. At Penn State, I had bona fide national champs.”

Despite a short but successful wrestling career in Happy Valley, Lawson had yet to give up on his dreams of one day playing in the NFL

While at Penn State, NFL teams like the New York Jets attended practices to witness the heavyweight in action. Lawson also worked out for a handful of teams upon graduating from the university but never officially signed with a team.

It was not until after graduation that he had even the slightest interest in pursuing a career in MMA.

Lawson received a call from UFC heavyweight legend Daniel Cormier, who has served as something of a mentor to the young fighter. Cormier asked Lawson to fly to California with an opportunity to pursue a career in MMA.

“If you’ve talked to any guys in the wrestling communities with an idea of fighting, I’m sure they’ve gotten a call from DC,” Lawson said. “After I had a second workout with the Jets and it didn't work out, I decided to see what MMA was about, so I traveled out to California.”

Lawson now belongs to the American Kickboxing Academy, and throughout his young career has already had run-ins with some of the biggest stars the sport has to offer such as Khabib Nurmagomedov, Luke Rockhold and Cain Velasquez.

“It was a great experience,” Lawson said. “I've been doing it for the last 4½ years, and I'm hoping I can take it to the highest levels.”

Lawson, who currently holds a professional record of 2-1, understands the difficulties and challenges that are in front of him if he hopes to one day ascend to the top of the sport, but that certainly does not deter him from pursuing his goals.

“Going into MMA, the one thing I'll tell people is that it's not easy,” Lawson said. “My main thing is to try to make it big in MMA and let that opportunity lead to other opportunities. If you really want this you have to be all in.”

Despite repercussions, Cael Sanderson does not regret decision to send Penn State wrestlers home for the holidays

Families and loved ones often cherish their time together during the holiday season, but during the coronavirus pandemic, such gatherings are …

'They'll always be behind you' | Even without fans in Rec Hall, Penn State wrestling's support remains

Head over to the west side of Penn State's campus and you'll encounter Rec Hall, a large, albeit relatively unassuming brick building from the…