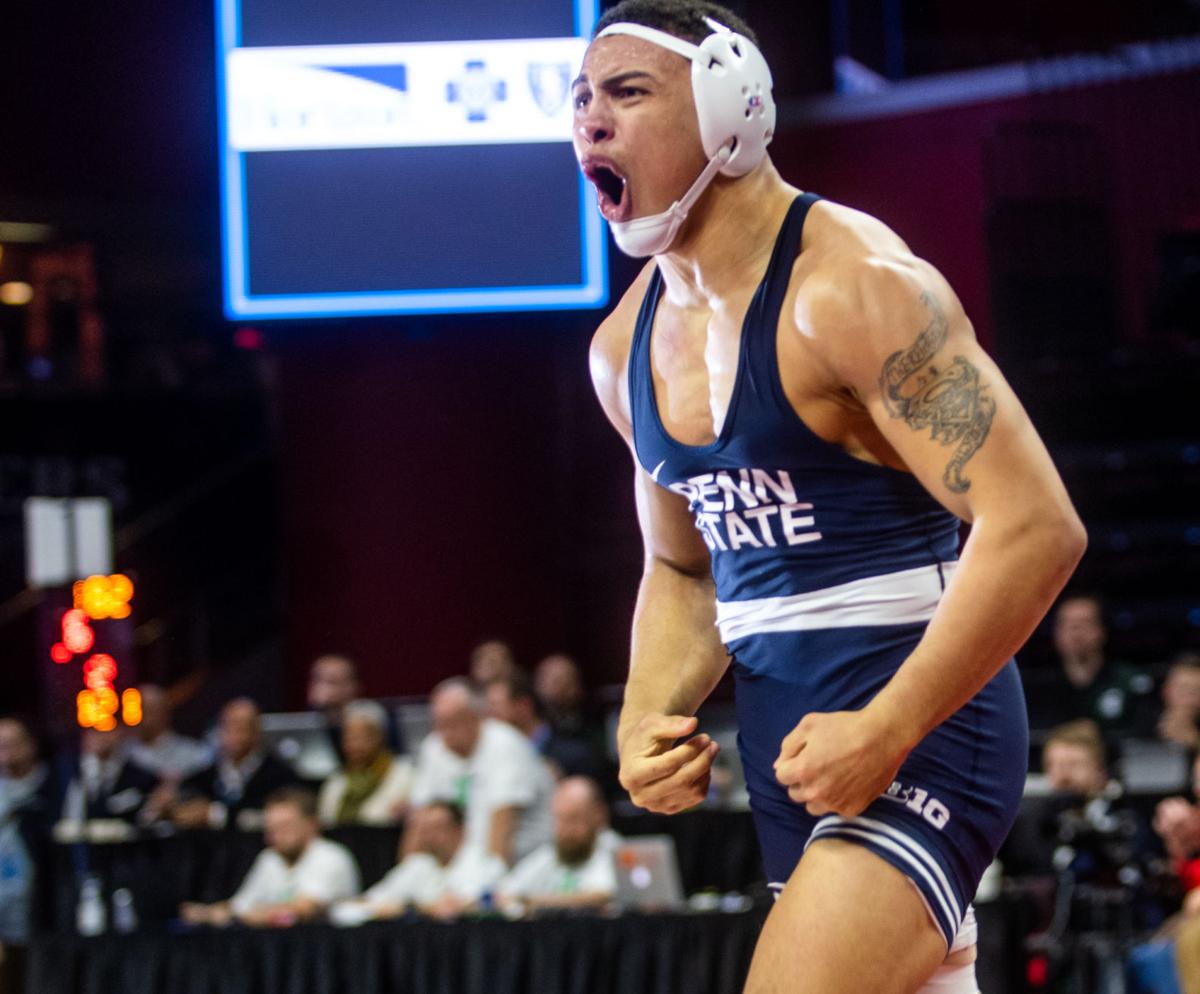 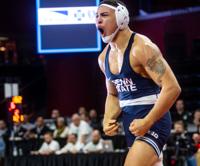 Penn State’s Aaron Brooks celebrates his pin in the 184-pound semifinals at the Big Ten Wrestling tournament at the Rutgers Athletic Center on Saturday, March 7, 2020. Brooks pinned Nebraska’s Taylor Venz to advance to the finals. 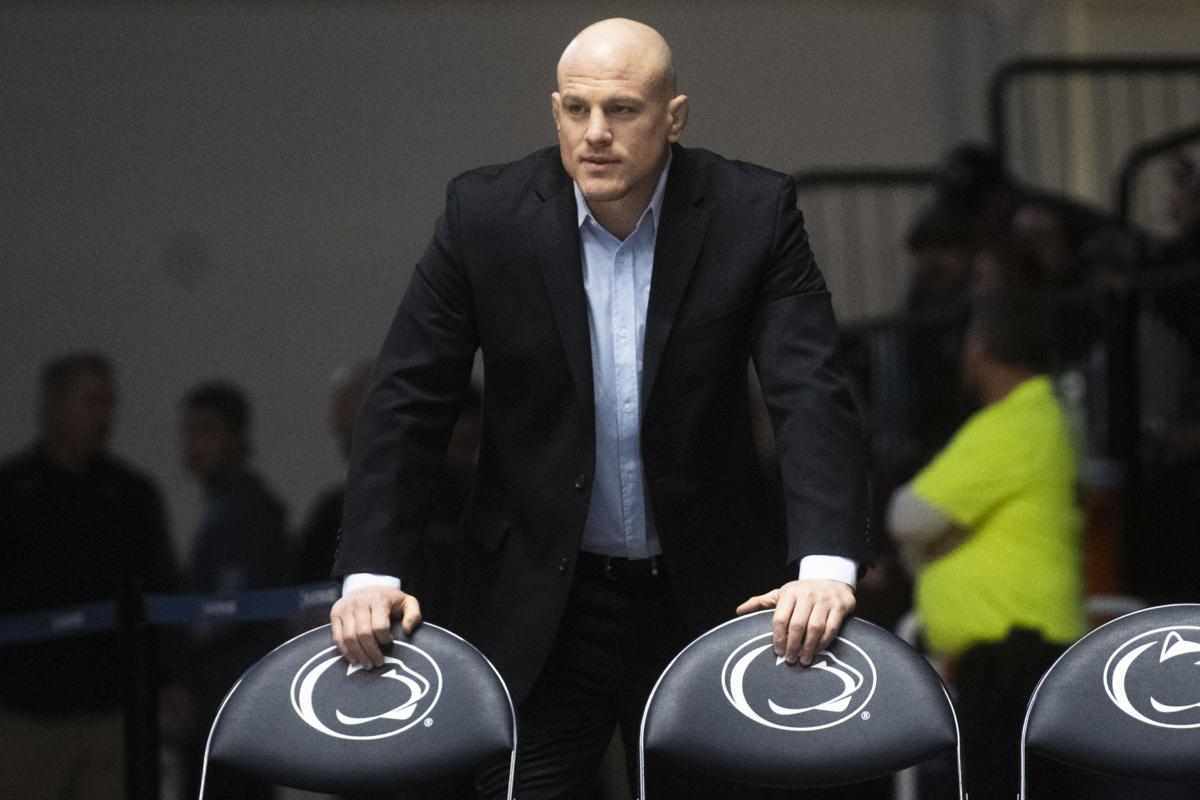 Drive down Aaron Brooks' street and park in front of his house and you'll see something interesting.

If you look carefully enough, there'll be a circular patch of grass missing from his front yard.

No, it's not because someone did a bad job at mowing the lawn or anything like that.

Rather, it was borne out of necessity and is symbolic of something much larger.

It came about as a result of the reigning Big Ten champion Brooks wrestling in his front lawn with teammates Carter Starocci and Greg Kerkvliet as a means of adapting and improvising when Rec Hall was shut down because of the coronavirus pandemic.

Brooks and everyone else on Penn State's team had their season cut short after last year's Big Ten tournament, which proved to be the end of the season after the NCAA Tournament was canceled due to the coronavirus pandemic.

While Brooks ended his season a Big Ten champion, he wasn't fully satisfied.

"I was super excited for NCAAs. As a kid, it's something you look forward to. So, it being only like a week away, I was really excited to compete and really ready," Brooks said. "I felt like I was peaking at the right time. So, whenever it was canceled, it was obviously devastating to a lot of us."

But Brooks, and everyone else on Penn State's roster, was granted an extra year of eligibility by the NCAA after it ruled this year will not count toward an athlete's eligibility.

Luckily for Brooks, that means he gets an extra shot to accomplish one of his main goals — becoming a four-time NCAA champ.

Once again, the opportunity to adapt has presented itself, and it's something Brooks' coach, Cael Sanderson, has taken full advantage of.

"With the NCAA making this a free year of eligibility, I know that changed our lineup because our kids, a lot of them weren't really willing — and I don't blame them — to risk not having a season,” Sanderson said. “So, we had guys that were planning on taking Olympic redshirts and redshirting pretty much everybody that we could but now, why not throw your best team out there?”

Similarly, there will be extra matches this year following dual meets where teams will have the chance to get in varsity matches for wrestlers who are either vying for starting spots, were thinking of redshirting or just need extra time on the mat.

"I do think you're going to see a replacement of kids who normally would be redshirting but now they're challenging for a spot because there's no reason why they wouldn't, right?" Sanderson said. "So it's all hands on deck and you're wrestling your best team."

Also among the changes this season that Sanderson and his squad are going to have to adapt to are having only nine dual meets, needing four matches to qualify for a postseason berth and traveling with more wrestlers than normal.

"You're gonna adjust regardless of the situation, regardless of how many matches you have. So everyone's in the same boat and we're not going to overthink it," Sanderson said. "I feel like we're ready to go now, but obviously the goal is to be ready to go in March and just building toward that and improving as we move along here and compete."

Beyond the adaptations and adjustments his team has made, Sanderson also sees a chance for the sport itself to undergo a change and reinvent itself, even if some programs across the country have been cut.

But it's twofold, as Sanderson does recognize the fickle nature of the landscape as well.

"As a sport and as an Olympic sport we see how vulnerable we really are when there's financial challenges. Unfortunately, with Olympic sports, you're kind of on the chopping block and, I think, as I've said a few times, there's actually a lot more value than we get credit for," Sanderson said. "Because even though [wrestling's] not big time enough to be on some of the national media outlets, there is enough support through other channels to support and grow as a sport but we just have to be creative."

Sanderson's and Brooks goals, while focused on the long term future, also have an immediacy to them.

And in that immediacy and based on what he's seen in practice, Brooks says don't be surprised if the Nittany Lions join the annals of history once again and do something few programs have ever done.

"I think we can be really good. I think we can crown five national champions again," Brooks said. "I think our team is really young, but I believe that everyone has what it takes to get the job done."

Motivation and intensity have never been a question for Cael Sanderson and his wrestling teams at Penn State, and it does not seem like either…