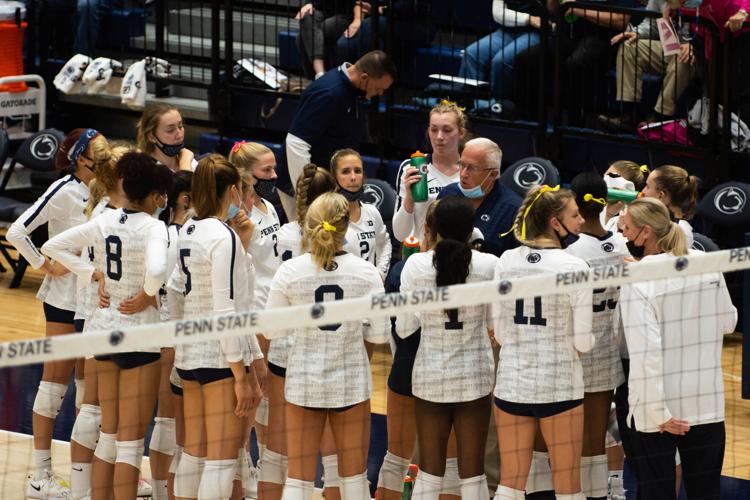 The Penn State women's volleyball team meets during half time during its game against Maryland at Rec Hall on Friday, October 29th, 2021 in University Park, Pa. Penn State beat Maryland 3-0. 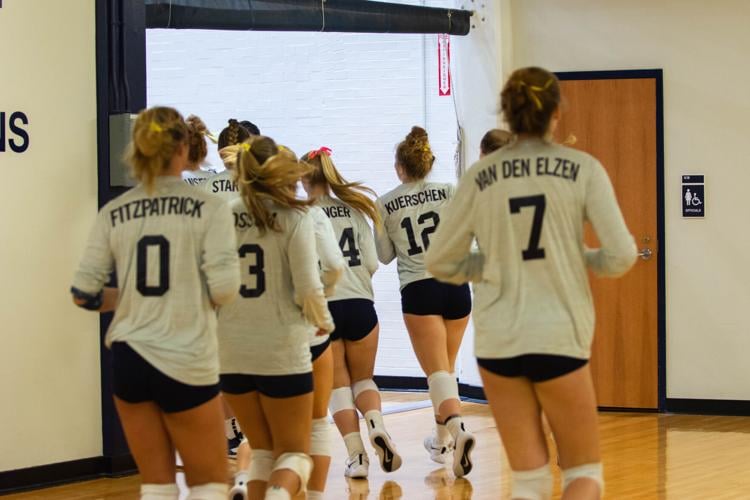 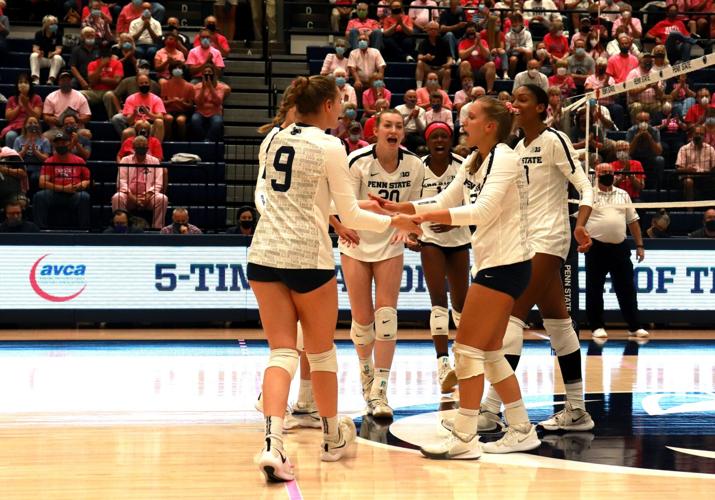 New faces are a common theme for a certain squad in Happy Valley this season.

Becoming just the third head coach in program history, Katie Schumacher-Cawley is set to lead her squad to a bounce-back season after Penn State lost in the second round of the NCAA Tournament last season.

With an above-average record of 21-11 last season, Russ Rose ended his legendary career as the all-time winningest coach, handing the keys to Schumacher-Cawley in the process.

The blue and white’s new head coach was an All-American star for the program back in the day, spending four seasons under Rose, making her all too familiar with Penn State.

Seven players from the team entered the transfer portal after last season, but the blue and white has done a good job recruiting players for this year.

With the season just around the corner, take a look at the newest members of the squad.

Katie Hurta, who previously announced she would suit up for Indiana, made the move to join the Nittany Lions in late February.

Hurta plays both setter and right side and provides the blue and white some much needed depth.

From Palos Hills, Illinois, she was named the Gatorade Illinois Player of the Year after leading Nazareth Academy to a 30-7 record and an Illinois 3A State Championship.

Alexa Markley, from Peachtree City, Georgia, did her part in leading her high school squad to several records.

Out of McIntosh High School, Markley helped the Chiefs win the Georgia 5A state title for the fourth year in a row, contributing 21 kills in the match.

The 6-foot-2 outside hitter was a first-team All-American as a senior, after putting up an astonishing 519 kills, 296 digs and 41 blocks.

Mandi Morioka, who previously intended to play for Minnesota, also decided to flip her choice and join the well-stacked Nittany Lion squad.

From Torrance, California, Morioka played at South High School where she mainly spent her time as a setter.

The rising freshman is set to be a libero/defensive specialist with Penn State, a new and untapped role for her that could bring some growing pains early in her collegiate career.

In three seasons for the black and gold, Williams averaged 3.58 kills per set in 330 sets played. She was even better in 2021, putting up a mark of 4.04 per set to lead her conference.

As one of the top players on the court, Williams was recognized as an AVCA Pacific South All-Region honorable mention and first-team All-Big West selection this past year.

Taylor Trammell played for a conference foe before deciding to take her talents to Happy Valley.

The 6-foot-2 star from Lexington, Kentucky, played two seasons at Purdue before deciding to leave the program.

Trammell recorded 219 kills and 246 blocks for the Boilermakers over two years and earned a spot on the Big Ten All-Freshman team in spring 2021.

With at least a couple of years left of eligibility, she should have plenty of time to help her new team win big-time games.

Zoe Weatherington is another 6-foot-2 star who comes into town after transferring from Utah.

During her time with the Utes, the outside hitter produced 635 kills, 140 digs and 131 blocks.

Weatherington was a three-time captain with four All-State selections in high school and led her team to the North Carolina State Championship during her senior year.

The experienced senior should provide a spark for the blue and white and make it tougher on her coach to make play-time decisions.

Gillian Grimes is yet another incoming recruit who flipped to Penn State from a rival school.

Grimes committed to play for Michigan State but ultimately had other plans following the retirement of coach Cathy George.

The 5-foot-6 libero played alongside newly acquired Hurta at Nazareth Academy, helping her and the school win a state championship in Illinois with 35 digs in the contest.

Seleisa Elisaia comes to Penn State from Cal State Bakersfield with one year left of eligibility, hoping to leave a big mark on the team.

In her fourth and final year with the Roadrunners, the first-team All-Big West honoree was stellar, collecting 1,025 assists in 2021.

In her last season of collegiate volleyball, expect Elisaia to come out fiercely motivated to compete for a title.

The blue and white begins its season on Aug. 26 when it welcomes UConn into Rec Hall for the Penn State Invitational.

Penn State is hitting the big screen in a major way in 2022.