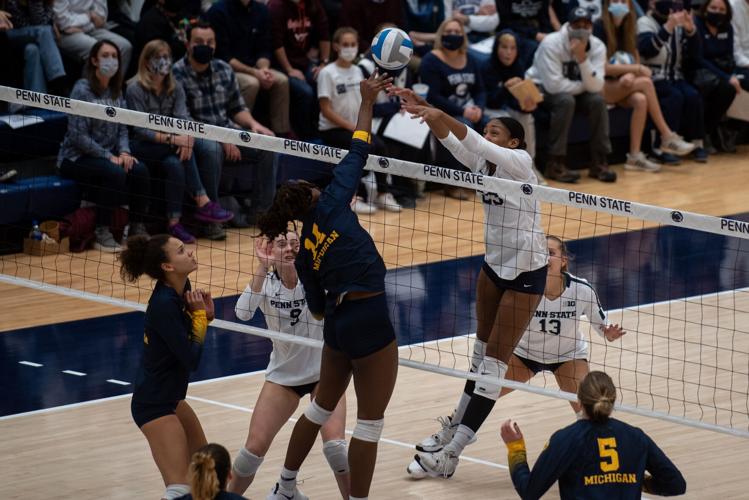 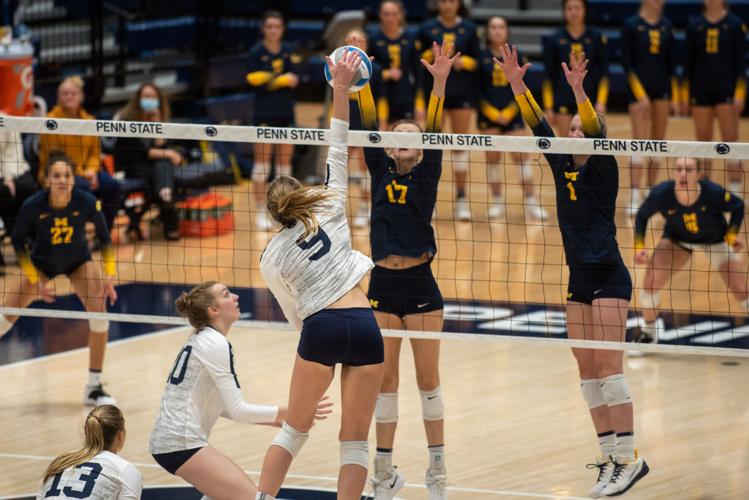 The five-game losing streak against Stanford is finally over.

It was a Friday night fight for Penn State, and they took it to Stanford all game long with dominant play at the net as well as capitalizing on the Cardinal’s unforced errors.

Going up against their first ranked opponent of the year, the Nittany Lions needed to manage the moment on a neutral site and come out strong.

Coach Katie Schumacher-Cawley’s squad was ready to play from the opening serve as a Kashauna Williams block gave the Nittany Lions a 13-6 lead against No. 11 Stanford in the early going.

Zoe Weatherington continued to bring the boom, swinging her right arm with force and driving the ball through the floor, picking up a big-time kill to give Penn State a 17-9 lead.

Allie Holland made her much anticipated return to the floor in a big way after missing the three matches last weekend, picking up a huge kill which gave the Nittany Lions a 19-13 lead.

Penn State was running the block party as Trammell led the way with six blocks, helping the Nittany Lions win the first set 25-16.

Penn State and Stanford were back-and-forth throughout the second set, both asserting their dominance at the net but neither side giving the other any momentum.

Penn State was looking to maintain its intensity, searching for a way to close out the set with a win. They would turn to Williams who received a great pass from Seleisa Elisaia for the kill to maintain a 21-19 lead.

While on the ropes, Stanford called a challenge at a critical moment hoping to tie the score at 23-23. However, Stanford lost the challenge and dropped the next point, allowing Penn State to take a 25-22 Set 2 win.

With a 2-0 lead in the match, the blue and white was looking to get out to a strong start and keep preventing the cross-court kills that Stanford hitters were searching for at the net.

Stanford tightened their play significantly throughout Set 3, taking advantage of miscues and building a wall at the net to prevent the Penn State attack while increasing their lead to 18-10.

Penn State needed a response to the huge Stanford run and got one from Trammell as her consecutive kills — followed by more from Williams and Elisaia — brought the score to 19-16 Stanford.

After a long rally, Schumacher-Cawley’s challenge was to no avail as Stanford closed out a 25-17 Set 3 win on a 6-1 run and stayed alive in the match.

The blue and white got off to a slow start in Set 4, but responded in a big way as they clawed back to make the score 13-13.

Penn State and Stanford played evenly throughout Set 4 as Holland tallied consecutive kills to give the Nittany Lions a 20-19 lead.

With the score 23-23, Stanford used back-to-back kills to pick up the Set 4 win, sending the match to a pivotal Set 5.

With Set 5 being played to 15 points, Penn State and Stanford were locked in a back and forth final set as an Elisaia kill brought the score to 8-7 Nittany Lions.

After a clutch service ace from Elisaia gave Penn State a 13-10 lead, Penn State closed the door on Stanford, winning the final set 15-10 and the match in five sets.

After two weeks of back-to-back action, tournaments and a long drive to Baton Rouge, Louisia…