With support from the Penn State Blue Band and the Penn State Cheerleaders, the Penn State Women's Volleyball team takes to the court for starting lineups during its match against Rutgers on Friday, Oct. 15, 2021, at Rec Hall. Penn State defeated Rutgers 3-1. 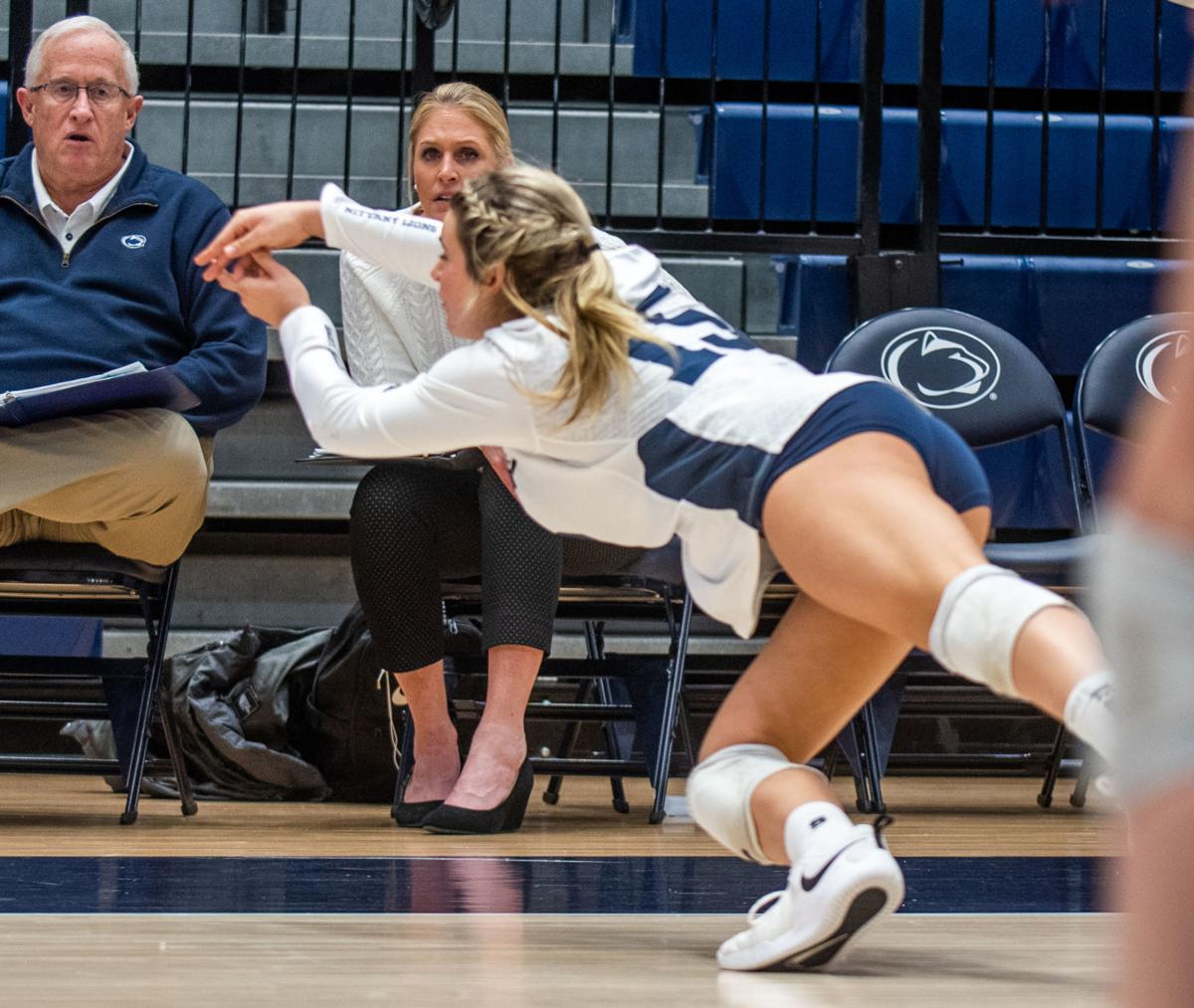 Penn State defensive specialist Jenna Hampton (15) dives for a dig as head coach Russ Rose and assistant coach Katie Schumacher-Cawley look on from the bench during the first round of the NCAA women’s volleyball tournament at Rec Hall on Friday, Dec. 6, 2019. The no. 11 seed Nittany Lions defeated the Princeton Tigers 3-0.

With a multitude of options to replace seven-time national champion Russ Rose, Penn State opted to choose his successor from within the program — a hire that brings leadership and experience as the Nittany Lions transition into unfamiliar territory.

Katie Schumacher-Cawley was tabbed as the third head coach in the blue and white’s illustrious history Monday, with the announcement coming just over two weeks after Rose announced his retirement.

Schumacher-Cawley is no stranger to Happy Valley, having been a two-time AVCA All-American and member of Penn State’s first national-title squad in 1999.

She returned to the Nittany Lions in 2018 to serve as an assistant coach — a role she continued to hold through the 2021 season.

Ultimately, Penn State’s decision to make Schumacher-Cawley the next face of the program was a phenomenal one.

The rumor mill swirled for a couple weeks as the calendar flipped to 2022, and the Nittany Lions could have gone in a number of different directions with the hire.

A handful of Rose’s former players hold coaching positions themselves across the country, and one of them — Salima Rockwell — was named head coach at Notre Dame on Friday.

In the end, it was the former player on Penn State’s own bench that earned the nod.

Schumacher-Cawley knows the Penn State program inside and out and has nearly a decade of head-coaching experience on her resume.

She won 113 matches in her eight seasons at the helm of the University of Illinois-Chicago, becoming the third all-time winningest head coach in Flames’ history after spending six seasons as an assistant.

In her lone season at Penn in 2017, Schumacher-Cawley guided the Quakers to a 7-7 conference mark, recording the most Ivy League wins by a first-year head coach in program history.

While the Big Ten isn’t the Ivy League nor the Horizon League, Schumacher-Cawley’s extensive Division I head-coaching background can only be seen as a plus.

Add in her championship experience as a player and Schumacher-Cawley knows what it takes to win at the highest level.

The Big Ten is arguably the most competitive women’s college volleyball conference in the country — the conference has boasted at least one team in the national semifinal for 14 straight years and was represented by both squads in the 2021 national championship game.

As Penn State enters a new era, it will benefit from having someone familiar with the conference and what’s required to be successful in it.

Though it’s too early to tell whether or not the Nittany Lions will have immediate success under Schumacher-Cawley — if things take a bit longer to develop, Penn State fans must exercise patience.

It won’t be an easy task — the blue and white needs to replace a large part of its core from 2021, as it lost a few stars to the transfer portal and to graduation.

With several notable contributors of seasons past moving on — seniors Jenna Hampton and Gabby Blossom among them, with Kaitlyn Hord still in the portal — Schumacher-Cawley and the Nittany Lions have their work cut out for them.

Luckily for Penn State, Schumacher-Cawley has proven to be effective at developing and maximizing talent, and with the blue and white lacking experience across the board in 2022, she’ll be tested right away.

For the first time in more than four decades, it’s a season of change for Penn State, and while there is no replacing the impact Rose left on Happy Valley, it's important that the Nittany Lions begin to take steps forward.

With Schumacher-Cawley leading the way, the blue and white is poised to return to its familiar position among the Big Ten’s best.

At the end of the 2021 season, several of Penn State's star players announced they would be …