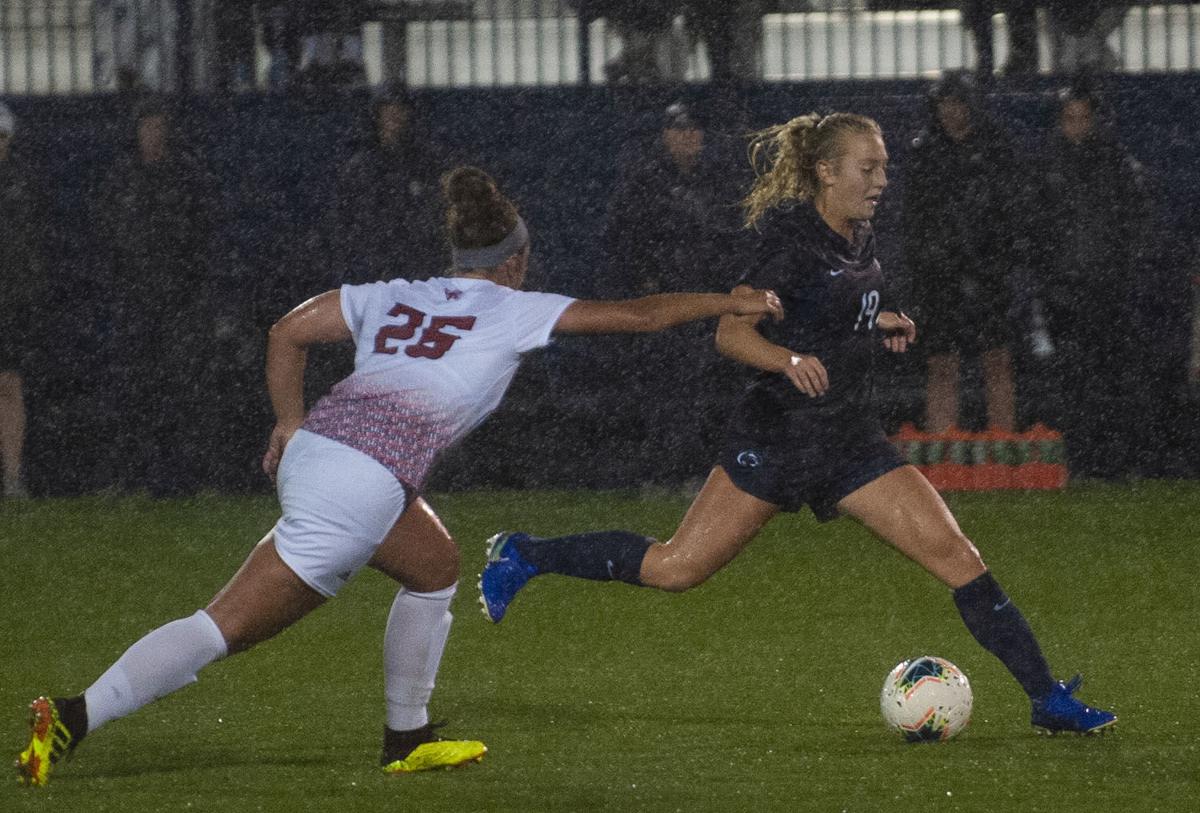 Midfielder Frankie Tagliaferri (19) runs with the ball during the soccer game against Rutgers at Jeffrey Field on Thursday, Oct. 3, 2019. Rutgers defeated Penn State 3-2. 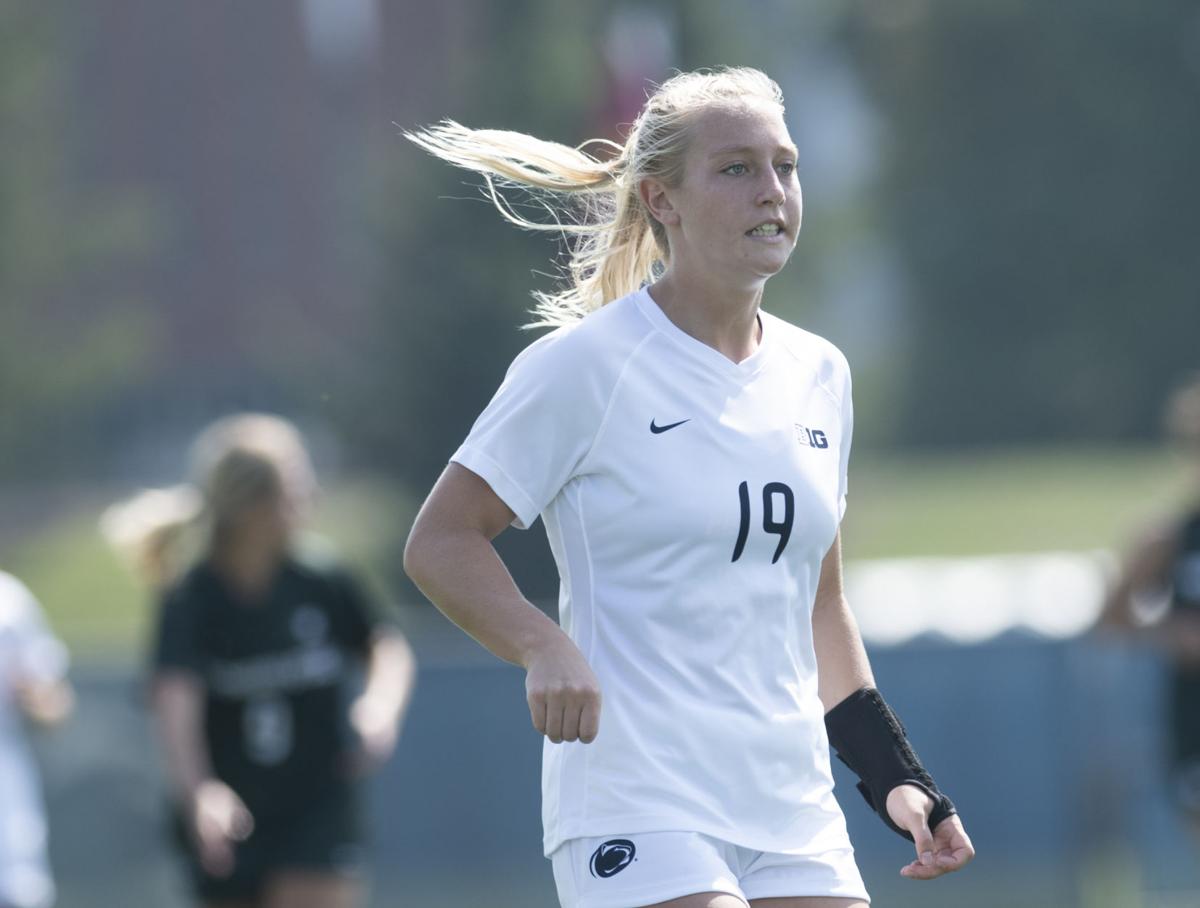 Midfielder/forward Frankie Tagliaferri (19) looks toward the play during the women’s soccer game against Michigan State at Jeffery Field on Sept. 22, 2019. 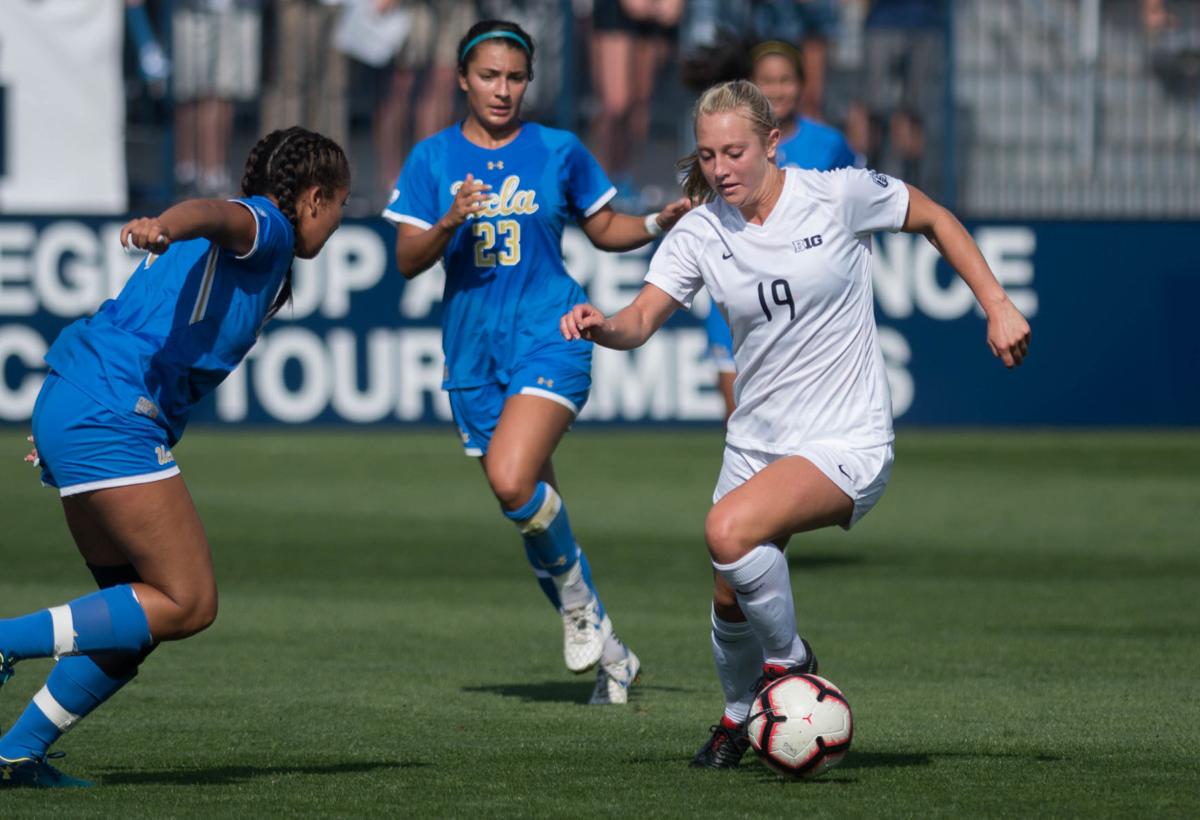 Penn State's Frankie Tagliaferri (19) splits a pair of defenders during an early season matchup with #2 UCLA at Jeffrey Field on Saturday, August 25.

In the weeks following Penn State’s 3-1 defeat to Florida State in last season’s NCAA Tournament, one of the top players in the nation announced she was transferring from Penn State.

All of this happened only months after Tagliaferri, alongside her fellow team captains Sam Coffey and Kerry Abello, announced the veteran trio would stay together for one final season in hopes of winning a national championship to bookend their All-American careers.

For Tagliaferri, hopes of hoisting the College Cup was not enough to sway her from going back on her decision to stay in Happy Valley.

In the eyes of the four time all-Big Ten player, it wasn’t that she was abandoning Penn State; rather, Tagliaferri viewed the transfer as a way to come home to her family, and she admitted as much to her coaches and teammates.

“It was a hard conversation because I didn't want to leave. It wasn't like I left because I wasn't necessarily happy, I wasn't happy with being so far away from home,” Tagliaferri told the Daily Collegian, “So I love [Penn State], and there's still days that I miss it so much.

“I absolutely love that place, but I'm so happy at home right now.”

For the last four years, Tagliaferri’s parents, Francis and Tracy, had been making the four-hour journey from Colts Neck, New Jersey, to watch their daughter play for the blue and white.

To do so, they were forced to leave Tagliaferri’s 11-year-old brother at home. Now, her parents don’t have to choose between the two, as the fifth-year senior plays only 30 minutes away in Piscataway.

After a surprise victory against No. 22 Rutgers, Penn State’s win has gotten a decent amount…

Traveling to Centre County to watch women’s soccer is a struggle for the majority of the parents on the team, as 28 of the 31 families live outside of Pennsylvania.

In that number are parents of two starting midfielders, Cori Dyke and the aforementioned Coffey.

Wayne Coffey and his wife Denise Willi never miss a home game, despite living four hours away in Sleepy Hollow, New York, and the couple has been taking turns this season in order to ensure at least one of them is present for away games.

For the Nittany Lions’ matchup at Minnesota last Sunday, Wayne flew into Chicago, drove to Wisconsin and drove to Minneapolis before flying back to New York the next day.

“Our attitude is really that we're never going to get this time back. Samantha's gonna go pro, and she's already been drafted, of course,” Wayne told the Collegian. “So if all goes according to plan, she'll be in Portland probably in January, and we'll do the same thing with Portland Thorn games, I'm sure.”

Over the course of his daughter’s career, Wayne said he never totaled the cost of all of the traveling required to be present at Sam’s matches.

“I've never tallied up what it costs, but it's not a small number. And it's worth every penny,” Wayne said.

However, Wayne admitted his ability to travel those distances came down to the fortune of his circumstances. Sam is the youngest of three siblings, who are now all independent, which frees up her parents to be at her games.

Wayne said there were a number of players on Penn State who had younger siblings at home, and he called it all a “great, big juggling act” to manage life at home along with the team’s schedule.

For the parents of Dyke, the complexity of making it to Jeffrey Field for soccer games is exacerbated by living in Littleton, Colorado, and having another daughter, Camryn, who plays soccer at Notre Dame.

Cori’s mother, Annette Dyke, said she had mapped out the travel logistics for the season so she could make it to 10 games for each of her two daughters.

On weeks where the Nittany Lions play two home matches, Annette is able to fly from Denver to State College and spend five days in University Park to watch her daughter play and spend time with Cori.

“We just kind of look at it like, ‘This is a short period of time, this is four or five years of college, and who knows what can happen after that,’” Annette told the Collegian. “It's an investment, and we'll never get this time back.

“So, I mean we are blessed that we can afford to do it, but you just can't put a price on what it's like to be there.”

Tagliaferri’s decision to return to New Jersey was influenced heavily by her desire to be closer to home, but the Big Ten’s leading goal scorer said her desire to be with her family was augmented by the difficulty of playing in the thick of the coronavirus last season.

The New Jersey native planned on coming back to Penn State, but at the end of the season, after speaking with her parents, Tagliaferri had a change of heart.

Following a “mentally tough” season where players were forced to live in a hyper-cautious environment for the sake of sports, Tagliaferri was further separated from her parents and from being able to share her senior season with them.

“From a parent's perspective, I totally understand how Frankie feels. That year, last year, was excruciating in so many ways,” Wayne said.

Wayne said his daughter lived in a bubble from June 2020 until May of this year, and in that time he barely saw her, while Sam and her teammates “jumped through hoops” to have a “truncated” season.

Tagliaferri’s former teammate, and striker for IFK Kalmar, Kristin Schnurr said the Rutgers midfielder was not alone in her struggles during the coronavirus-marked 2021 season.

Schnurr said because players weren’t allowed to interact with family or friends, a toll was taken on the mental health of her teammates last spring.

When it came to Tagliaferri transferring to Rutgers, some Penn State players were confused and “took it harder than others,” Schnurr said.

“People need to make their own personal decisions, and you have to respect their decision. It's not like [Tagliaferri's] making the decision to make you mad or anything like that,” Schnurr told the Collegian. “She's making the decision for herself and her personal well being.”

According to Rutgers’ coach Mike O’Neill, Tagliaferri’s decision was nothing but “plain and simple.”

“She wanted to come home and be around her family,” O’Neill told the Collegian. “And I know what happens, she sees a lot of her family: they're at the game, she's going home for dinner, so it was that simple.”

Meanwhile, parents like Wayne and Annette are traveling across the country to watch their daughters play and to spend time with them.

Both Wayne and Annette expressed there was, and would be, no regret surrounding the financial sacrifice and time commitment to being present at games, but it is a sacrifice nonetheless.

“I'm sure over the course of her career, we've spent thousands of dollars and it's not necessarily thousands that we have,” Wayne said. “It takes a little creativity and finagling to make it work, but again — we wouldn't change it for anything.”

Now 12 games into her Rutgers career, Tagliaferri has notched ten goals and six assists to lead her team in both categories.

The Scarlet Knights currently sit unbeaten atop of the Big Ten standings and No. 8 in the nation, while the Nittany Lions have fallen out of the top 25 and rest fourth to last in the conference standings.

During the NCAA Tournament last season, Tagliaferri told the Collegian winning a national championship was her ambition then and to come back to try and win it the following year, as she still planned on returning at the time.

Having left Penn State along with its roster of elite talent, it was questionable whether the toll of transferring was not winning silverware in her final season to spend time with family.

Tagliaferri said she didn’t believe she had sacrificed her dream of winning a national championship.

With the Scarlet Knights thriving as a top-10 team in the country and Penn State only receiving one vote for a place in the top 25, it’s clear Tagliaferri is closer to bringing home a national title in Piscataway than she would have been if she remained in State College.

Now able to eat dinner at home with her family and watch her brother and cousins play high school sports, being close to home has been about giving back for Tagliaferri.

“I'm very, very, very close to my family,” Tagliaferri said. “They've followed me everywhere. My grandparents have followed me across the country to Jordan with the U17 women's national team.

“I was excited to come home and give back to them, for them to be able to drive 30 minutes to me, because they’ve supported me forever.”

The Big Ten was at it again with more fireworks.

It is going to be spooky at the Penn State All-Sports Museum this Halloween season.

While Penn State hasn’t gotten off to a good start in Big Ten play with a 1-4 record against conference opponents, it has an opportunity to tr…

In recent games, Penn State has struggled to create offensive opportunities and put shots in the back of the net.

Penn State was able to win in convincing fashion over Northwestern in a bounce-back performance on Saturday night.

Luke Vargas is a sports editor for The Daily Collegian. He is a sophomore studying digital and print journalism with a minor in Spanish.