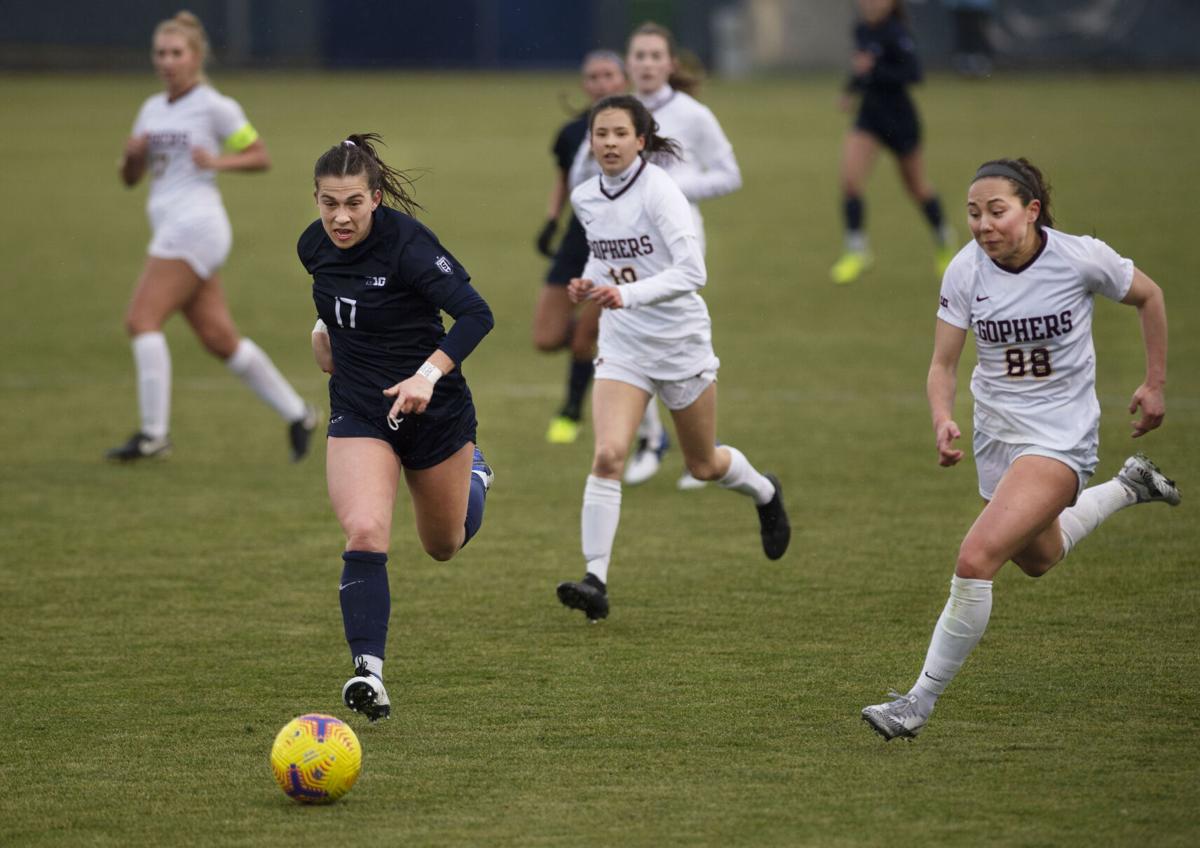 Midfielder Sam Coffey (17) dribbles the ball down the field during the Penn State women’s soccer game against Minnesota on Thursday, March 18, 2021 at Jeffrey Field in University Park, Pa. The Lady Lions beat the Golden Gophers 3-0. 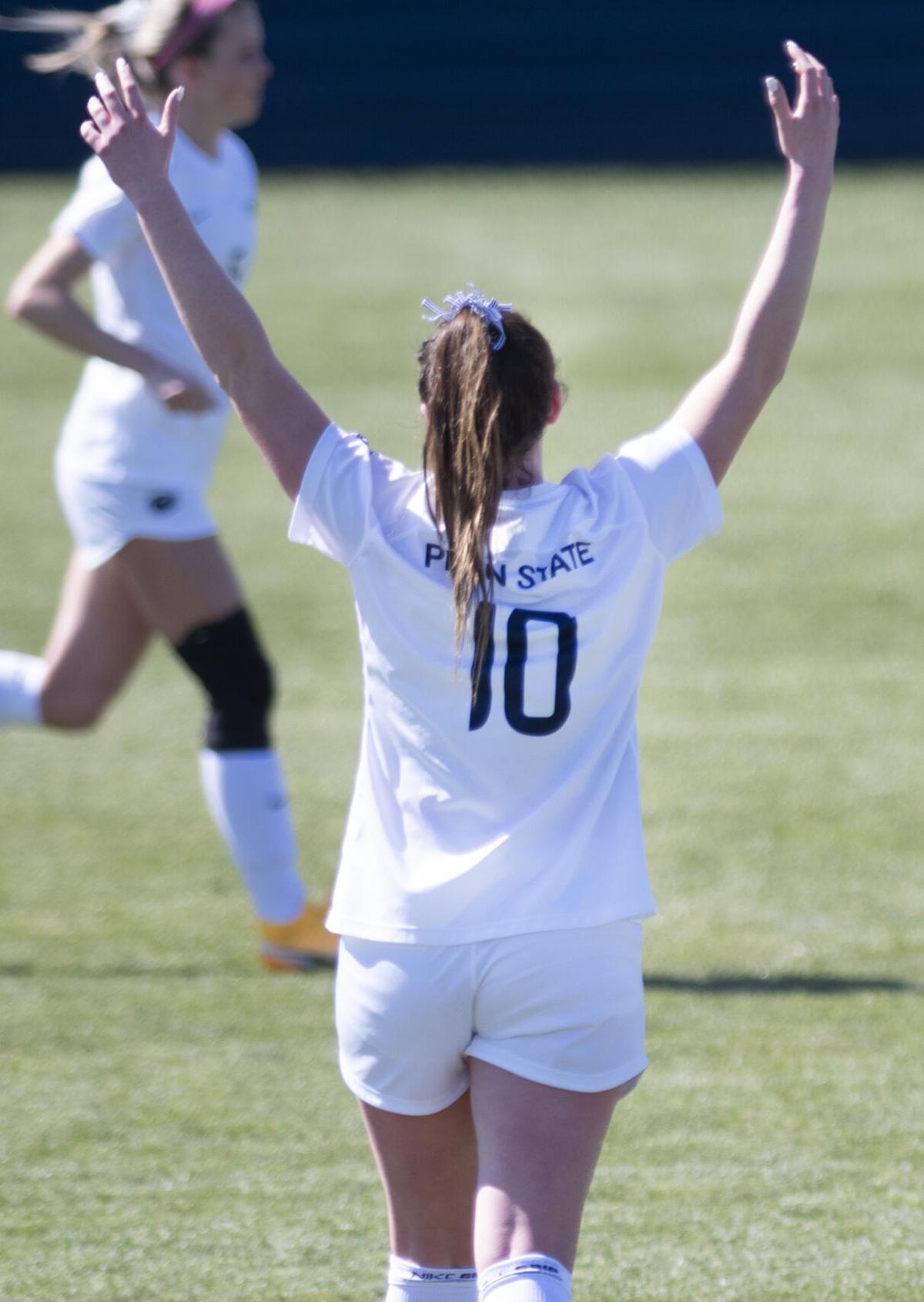 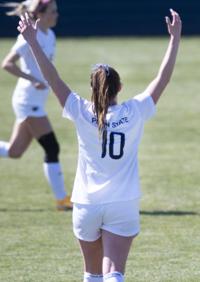 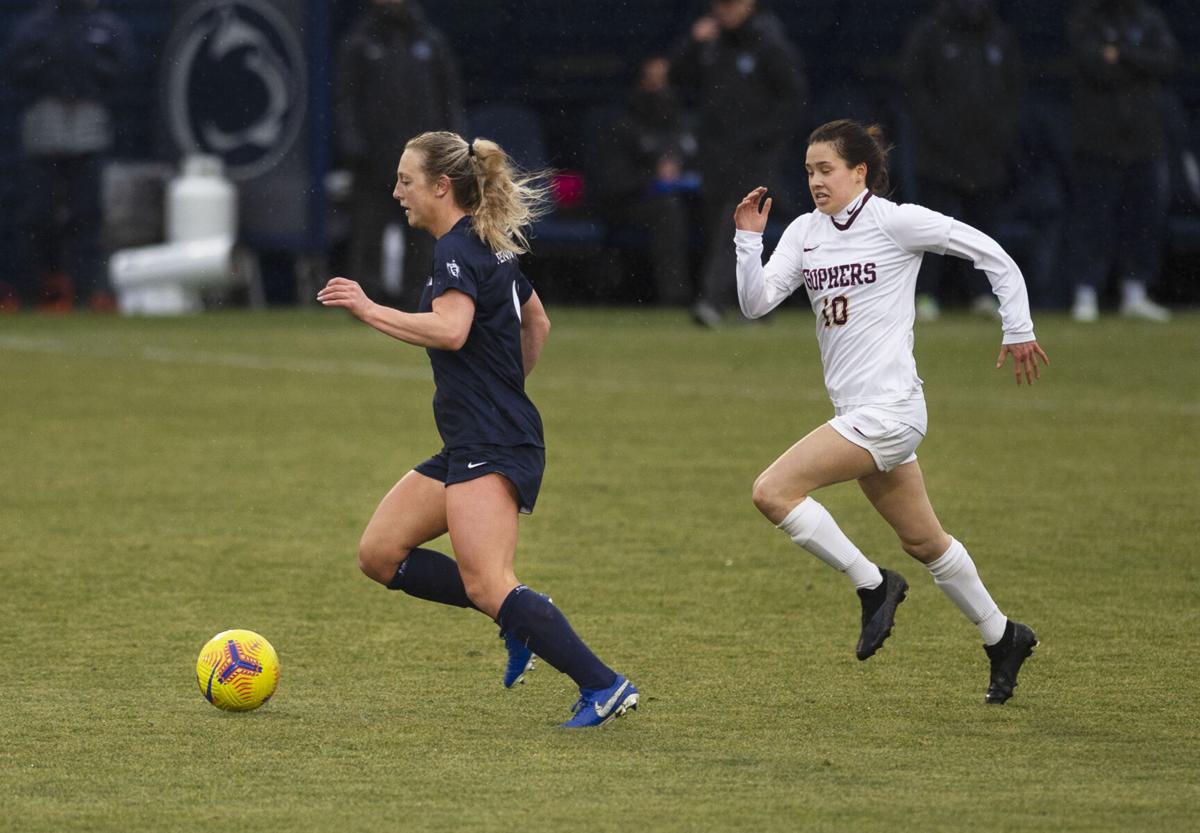 Midfielder Frankie Tagliaferri (19) dribbles the ball down the field during the Penn State women’s soccer game against Minnesota on Thursday, March 18, 2021 at Jeffrey Field in University Park, Pa. The Lady Lions beat the Golden Gophers 3-0.

Having clinched the Big Ten regular-season title with a game to spare, Penn State looks to be in a class of its own competing against conference foes.

But what would happen if the No. 6 Nittany Lions were matched against the nation’s best, top-ranked Florida State?

With this season featuring strictly conference games for both the Big Ten and ACC — the latter of which having played in the fall — the Nittany Lions and Seminoles have yet to play one another and will not clash unless the two sides meet in the NCAA Tournament.

For the sake of this hypothetical, the two teams would have to meet in the College Cup, likely in the later rounds, considering Penn State and Florida State would be highly seeded.

The Seminoles are the nearly-unanimous No. 1 team in Division I women’s soccer according to the United Soccer Coaches’ Poll, losing only one first-place vote to a North Carolina team who Florida State defeated 3-2 in the ACC Championship game in November.

Florida State went undefeated in the fall with 11 wins, including victories over No. 2 North Carolina, No. 7 Duke, No. 8 Clemson and No. 10 Virginia.

The blue and white has played two ranked opponents in No. 23 Ohio State and No. 24 Rutgers. Penn State only managed a 2-2 draw against the Buckeyes and dropped points in a 3-2 loss to the Scarlet Knights.

What Penn State lacks in experience against top-ranked sides, it makes up for in its tactical flexibility.

Coach Erica Dambach has noted earlier in the season that the biggest difference between her team and the likes of Florida State is the season-long evolution that her team takes to reach its pinnacle level of performance.

With every game this year, Penn State has grown in fluidity and confidence as the regular season comes to a close with the blue and white riding a nine-game unbeaten run.

Given that it would take a lengthy run in the tournament for these two teams to meet, Penn State will have greatly raised its level of play with multiple tournament wins under its belt.

Tactically, the two teams play an extremely similar brand of soccer that would make for one of the more robust challenges for either side.

The Seminoles and the Nittany Lions line up in a 4-3-3 formation, and both sides tend to dictate the run of play using this formation.

The key to Florida State’s ability to control games is Jaelin Howell, the ACC Midfielder of the Year.

Howell scored four times and chipped in two assists for the Seminoles this year, but her greatest contribution was her distribution from the all-important No. 6 position at the heart of the midfield.

As a whole, the Seminoles would look to control the rhythm of the game against Penn State with long spells of possession before launching into devastating attacks that have created 3.09 goals per game this season.

Florida State has played at a higher level than any of the opponents Penn State has faced so far this season, but not in an entirely different fashion from a Big Ten opponent that the blue and white has already faced in its spring slate.

The Seminoles play an almost identical style to Michigan, and Penn State ran rampant against the Wolverines in a 3-1 victory earlier this season.

Just like in the game against the maize and blue, Dambach would likely have her team playing compact and deep in its own half to invite Florida State to move its line high up the field.

The blue and white would religiously press Howell and the two Florida State center backs, utilizing striker Ally Schlegel’s relentless running on the defensive side of the ball.

The wide attackers for Penn State would make runs through the channels between the Florida State fullbacks and center backs.

These runs would give the blue-and-white wingers acres of green grass to run. But more importantly, this would open up space for the progressive ball-carrying midfielders of Sam Coffey and Frankie Tagliaferri.

The blue and white’s duo of Coffey and Tagliaferri would play a central role in servicing the attackers in behind as well as making their own deep runs, which has often led to goals; the two have combined for 10 goals and 12 assists on the year.

By trapping Howell and Florida State’s center backs with Schlegel’s pressing, the Nittany Lions could launch the same neck-breaking counter attacks that brought Penn State so much success against Michigan.

Florida State would do its own damage on the offensive side of the ball, particularly in the wide spaces.

Against Ohio State, the Nittany Lions demonstrated a deficiency in ability to clamp down on agile wingers such as Kayla Fischer in one-on-one scenarios.

Should the Seminoles isolate fullbacks like freshman Ellie Wheeler and redshirt sophomore Maddie Meyers out on the wings, Penn State’s defense would suffer.

In the end, the game would come down to who controls the center of the park.

Both sides have high leveled goal-scorers coming from multiple positions, and the game would be decided by who can keep control of the ball.

Penn State has shown its strength of controlling games without the ball, while Florida State has predicated its attacking power on its ability to stretch teams and create spaces between the lines.

If the Nittany Lions maintained their defensive discipline and kept Howell from seeing much of the ball in space, the blue and white could walk away with a narrow win.

While Penn State puts up only 11.3 shots per game, more than half of those shots end up on target. High accuracy from a low volume of chances could be the perfect recipe for a smash-and-grab win for the blue and white.

However, Florida State’s offense has proven unstoppable against the premier teams in the nation. If the Seminoles are afforded space and time in possession, goals may be inevitable for coach Mark Krikorian’s team.

No. 6 Penn State has certainly proved it has what it takes to make a run in the NCAA Tournament.

If the Nittany Lions make it to the later rounds of the cup, playing the likes of Florida State is almost a guarantee. A meeting between the two would certainly feel like one of the top contests of the year.

Luke Vargas is a women's soccer reporter for The Daily Collegian. He is a freshman studying digital and print journalism with a minor in Spanish.