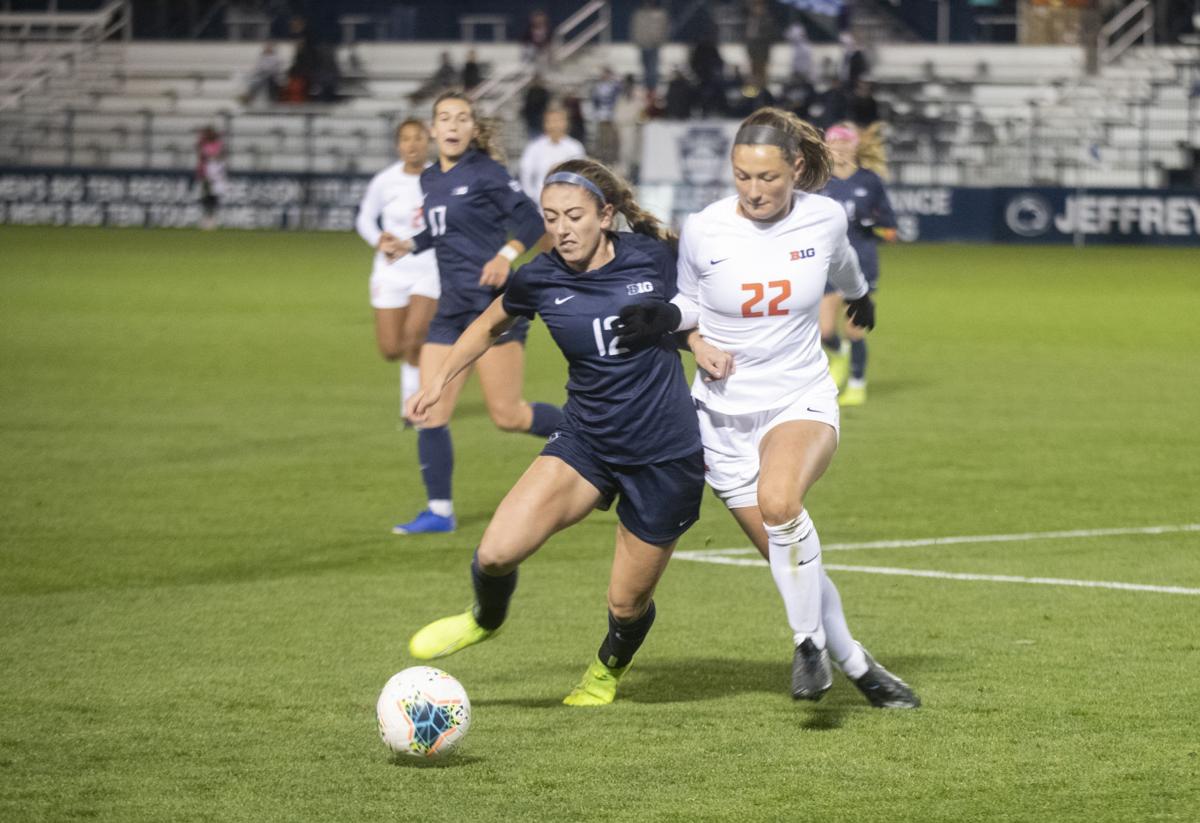 Payton Linnehan (12) runs for the ball during the game against Illinois on Thursday, Oct. 17, 2019 at Jeffrey Field. Penn State defeated Illinios 2-1. 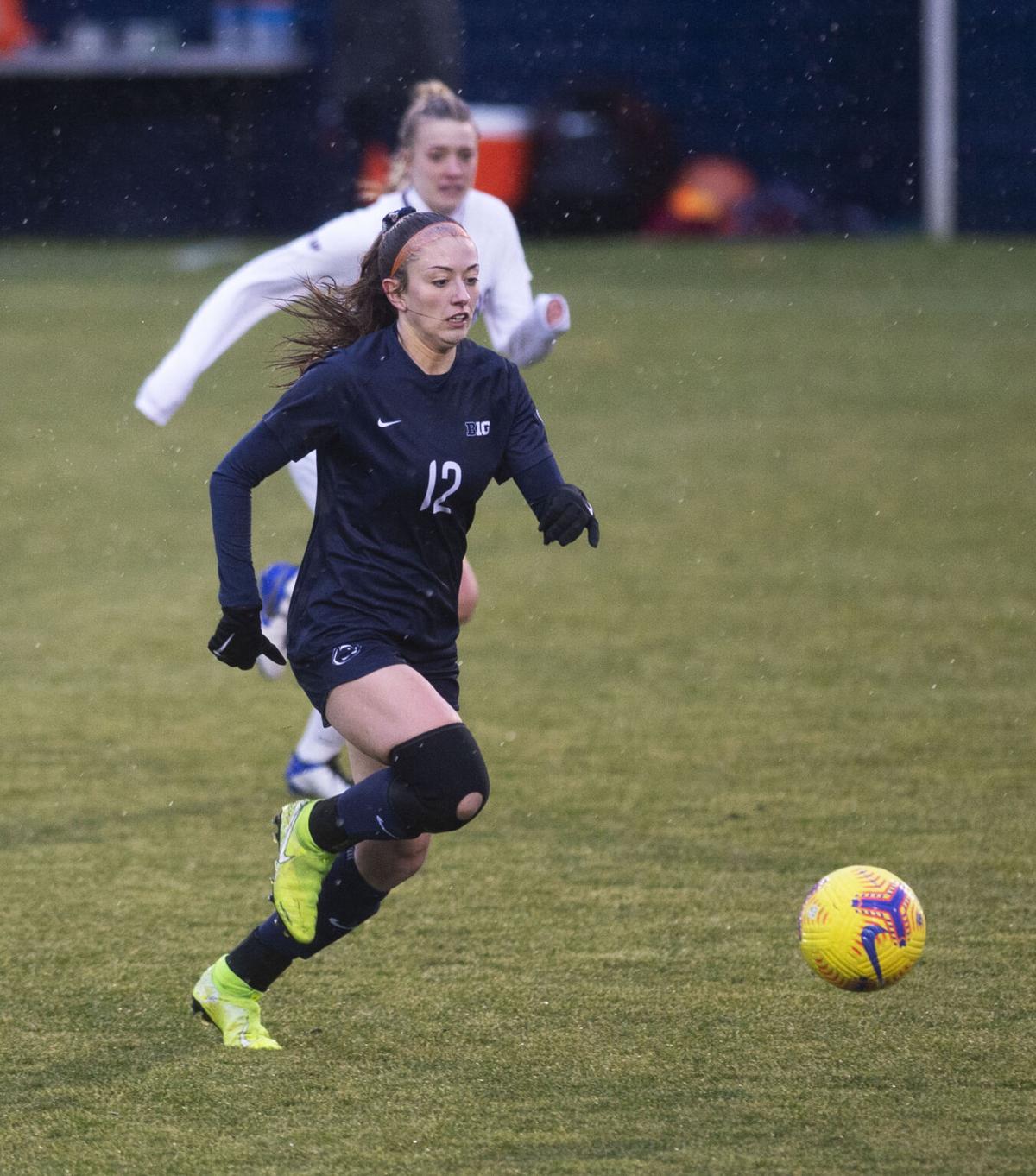 Midfielder Payton Linnehan (12) dribbles the ball down the field during the Penn State women’s soccer game against Minnesota on Thursday, March 18, 2021 at Jeffrey Field in University Park, Pa. The Lady Lions beat the Golden Gophers 3-0.

Penn State may have triumphed in the first round of the NCAA Tournament Friday night, but the even bigger story was the blue and white having a player return from the sidelines.

The Nittany Lions’ junior midfielder Payton Linnehan marched back out on the field after a left leg injury earlier on in the season kept her out of action.

The Jeffrey Field crowd gave her a warm welcome with a loud roar of cheers as her name was called midway through the first half.

“As soon as she came running on the field you could feel it,” coach Erica Dambach said.

However, she was not fully healthy as she was hindered with a large leg brace that engulfed her left leg.

Linnehan had missed significant time, including the Big Ten Tournament, but before she was sidelined with the injury she was leading the Nittany Lions in goals.

“It was a long recovery, but I am good and feel good,” Linnehan said.

Linnehan is one of Penn State’s most lethal weapons, coming into the game with six goals on the season in only eight games.

Earlier on in the 2021 campaign, Linnehan recorded her first ever career hat trick in the blue and white in just the first half of the game against La Salle.

Penn State’s redshirt junior forward Ally Schlegel is someone who benefits from the return of Linnehan because it takes the pressure off her.

Coming off an up-and-down regular season, Penn State now shifts its attention to the first r…

“I think we're pretty opposite in what we do and the players that we are,” Schlegel said. “Having her like to counterbalance that, I think it just throws the defense off because if I’m checking the ball and she's going it's kind of like who do you go with? I think it trips teams up a lot but it just gives us that extra thread everywhere we go.”

Schlegel thinks that the addition of Linnehan allowed for more movement on the Monmouth defense.

Penn State’s offense dominated offensively, outshooting the Hawks 22-4, with 15 of those Nittany Lions’ shots coming in the first half when Linnehan entered the game.

“It’s the best thing ever,” Schlegel said. “I think she just adds so much dynamic movement at the top.”

The dynamic duo of Schlegel and Linnehan was in full force in the 3-1 win over Monmouth that advanced the Nittany Lions into the second round of the NCAA Tournament.

Schlegel found the net early to put Penn State on the board first in the 26th minute of the game, setting the tone for the rest of the contest.

Linnehan came onto the field midway through the first half and she made an instant impact, even with the brace on her leg.

She was able to get free and score a goal in the 39th minute, building onto the Penn State lead.

“Obviously she comes in and impacts by scoring a goal right away,” coach Erica Dambach said. “But she does so many other things so well for us.”

Linnehan played the whole game with the brace on her left leg, but she looked like she was at full speed running up and down the pitch.

Her speed is just one of the aspects to Linnehan’s game and it is something that Schlegel has added to her Christmas List.

Christmas is right around the corner and now with the win over Monmouth, Penn State’s next NCAA Tournament game is too.

The Nittany Lions are set to play No. 3 USC or Grand Canyon in the second round of postseason play, depending on who wins Saturday’s contest.

At the moment, though, the blue and white have two things to celebrate, a home win and the return of one of its offensive weapons.

“It’s huge,” Dambach said. “It’s obviously huge having her back in there.”

Redshirt junior forward Ally Schlegel had a standout performance in the first round of Penn State’s 27th-straight NCAA Tournament appearance, …

Following first-round success, Penn State will be traveling to the golden state to face off against two-time national champions, the USC Troja…