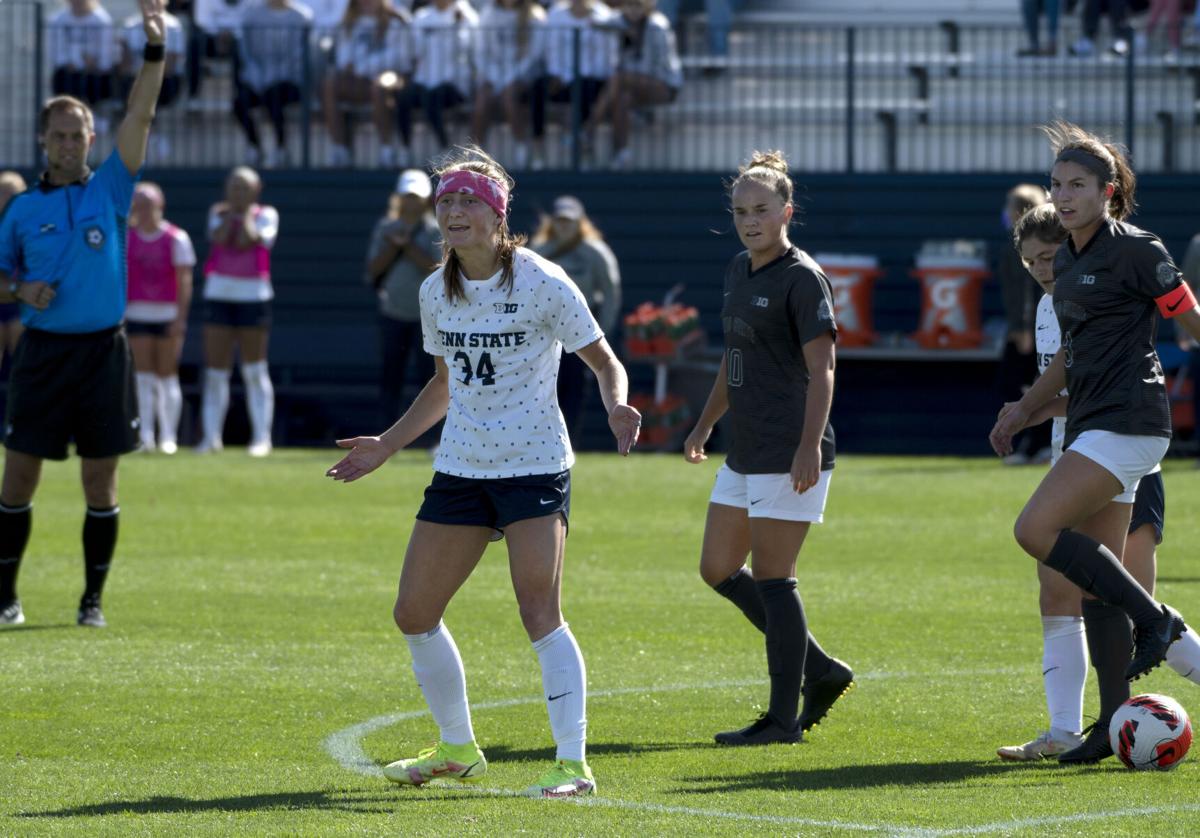 Forward Ally Schlegel (34) reacts to a call against her by the referees during the Penn State women’s soccer game against Ohio State at Jeffrey Field, Sunday, Sept. 26, 2021 in University Park, Pa. Ohio State beat Penn State 1-0. 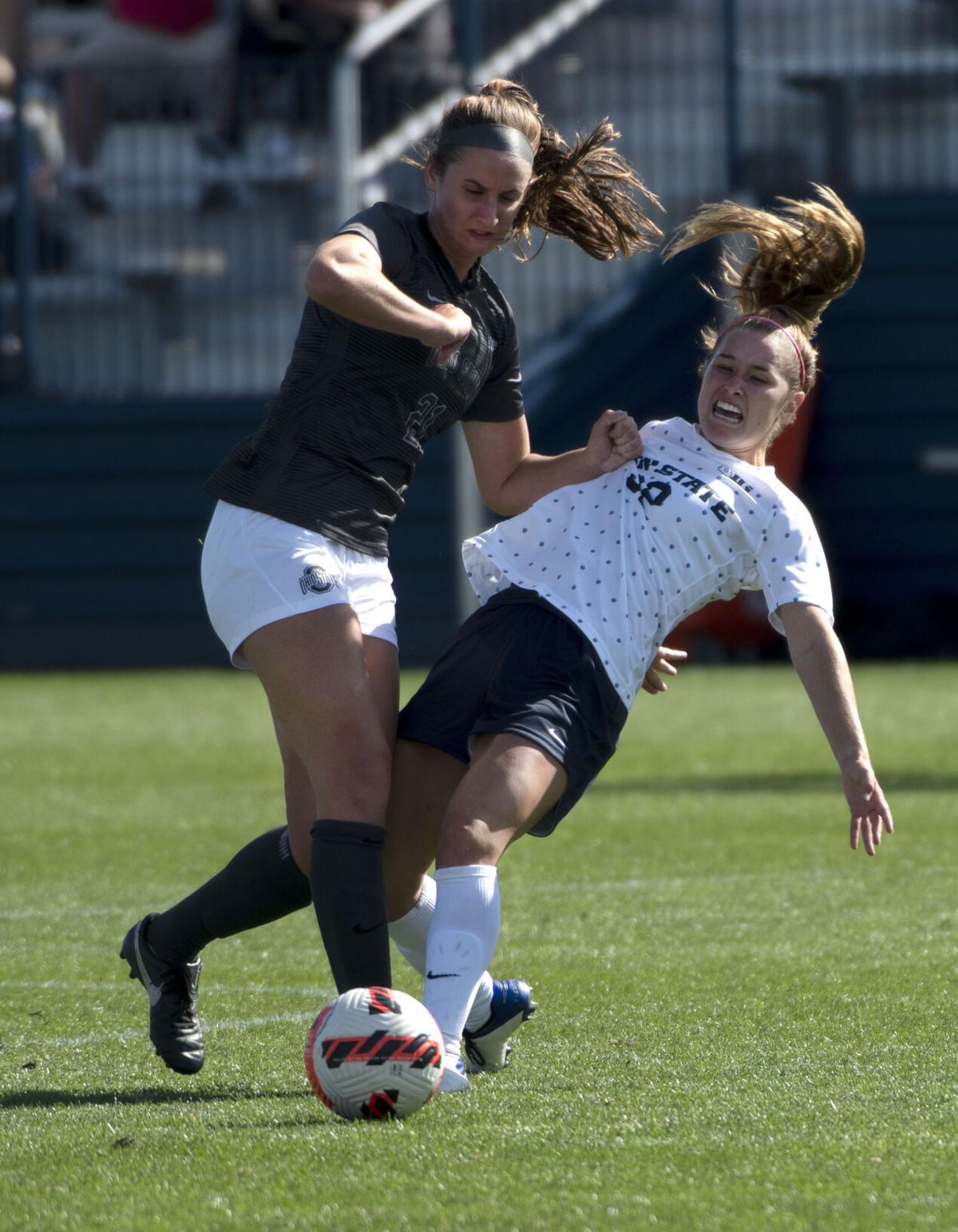 Penn State’s win against No. 18 Wisconsin did not translate into any sort of momentum against Minnesota on Sunday.

The Nittany Lions fell to the Golden Gophers 4-1 for its fourth Big Ten loss of the season.

The maroon and gold broke the ice first in Minneapolis with a score from senior forward Patricia Ward in the 10th minute, putting Minnesota up early 1-0.

The deluge of shots in the first half would not stop there.

The fireworks for the Golden Gophers picked up right where they left off in the second half.

Senior forward McKenna Buisman managed to slip past Asman, resulting in a free shot on an open goal to bump the lead to 3-0.

Later into the second half Penn State spiraled out of control, allowing another goal from the Golden Gophers, making it a 4-0 game.

In the final minute of the match, the blue and white snagged a late consolation goal from freshman midfielder Riley Gleason, but by then, the game had been long decided.

In the past couple of games, Minnesota has struggled to get the wheels turning.

In the Golden Gophers’ past two losses, they were scored on first and had to climb back from a deficit.

Against Michigan State, Minnesota conceded a 38th-minute goal from sophomore forward Zivana Labovic making it an uphill battle from then on.

The same occurred in the Golden Gophers’ latest game against Rutgers where Minnesota was scored on in the 9th minute.

Today’s game was a different story.

Minnesota took advantage of the defensive mishaps from Penn State and put up a goal in the first ten minutes.

Unlike the Golden Gophers’ previous opponents, they looked to build up a first half lead and doubled the scoreline to 2-0.

With its two goals, Minnesota set the tone for the first half, something that it has not done in its past two losses.

In the stretch of Penn State losses, there has been a common theme.

When given opportunities, the Nittany Lions have not been able to find the back of the net with its shots.

The blue and white were not outplayed offensively, but Minnesota was efficient with its chances while Penn State spurned them.

In terms of attacking production in the first half, the Nittany Lions only trailed Minnesota by one shot.

With the additional context of the second half, the stat that stood out the most for Penn State was shots — the Nittany Lions had 15 compared to Minnesota’s nine.

The blue and white had the opportunities but it could not lock in on its target time and time again.

With another loss to Penn State’s name, the Big Ten Championship is moving further and further out of reach.

The Nittany Lions opened up conference play with three straight losses. All three of those losses came in an upset fashion.

However, the blue and white picked up its first Big Ten win, upsetting the then No. 18 Wisconsin 2-1 in Madison.

With the win over the Badgers, Penn State still looked to be back as one of the top teams in the Big Ten.

Coming into the game, Minnesota had one of the worst conference records in the Big Ten at 1-3.

In Minneapolis against Penn State, the Golden Gophers looked like a top dog in the conference putting up four goals on the preseason favorites in Penn State.

With a loss to Minnesota and a Big Ten record of 1-3, the Nittany Lions will have a tough time securing a conference title this season.

One Penn State player caught the eye of ESPN on Saturday.

The Big Ten was at it again with more fireworks.