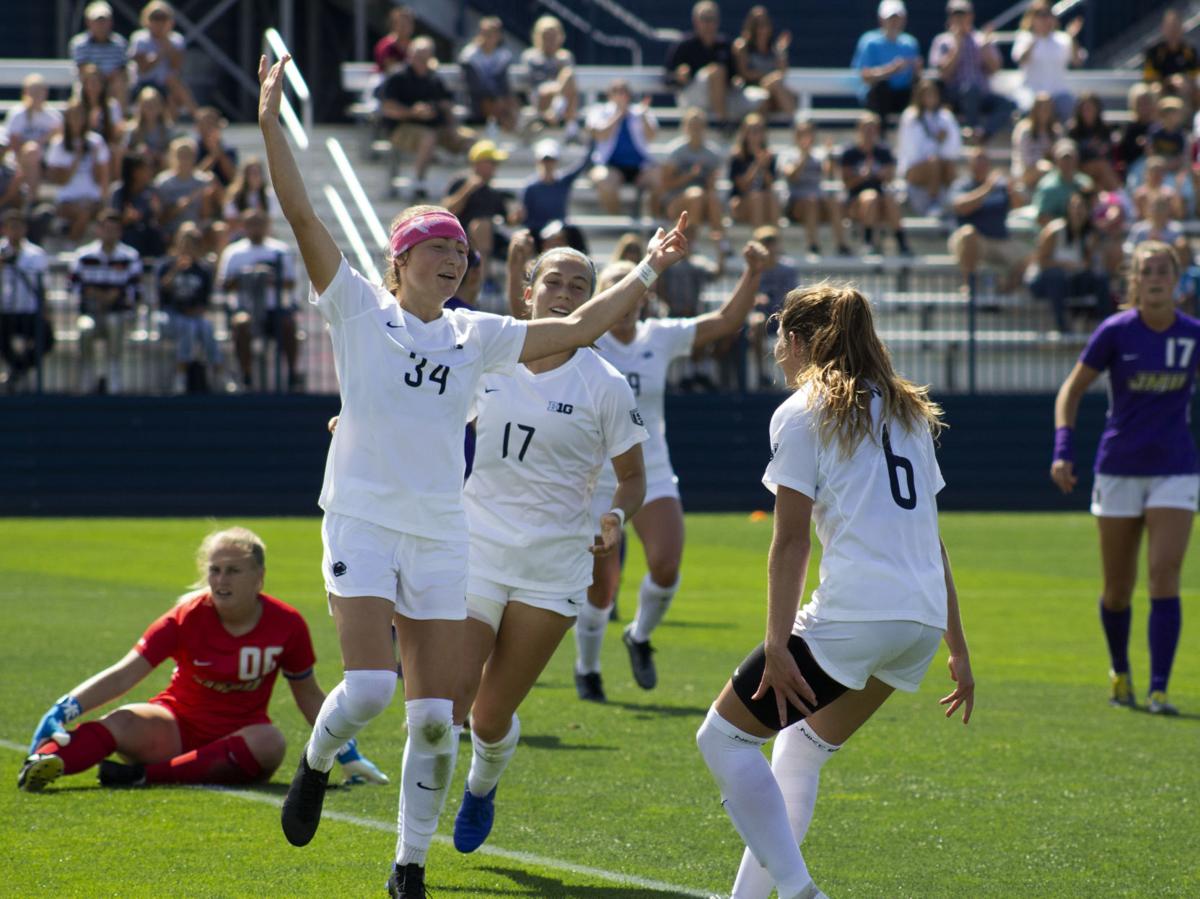 Midfielder Ally Schlegel (34) celebrates with her teammates after scoring the second goal of the women's soccer game against James Madison University at Jeffrey Field on Sunday, Sept. 8, 2019. Penn State won 2-1. 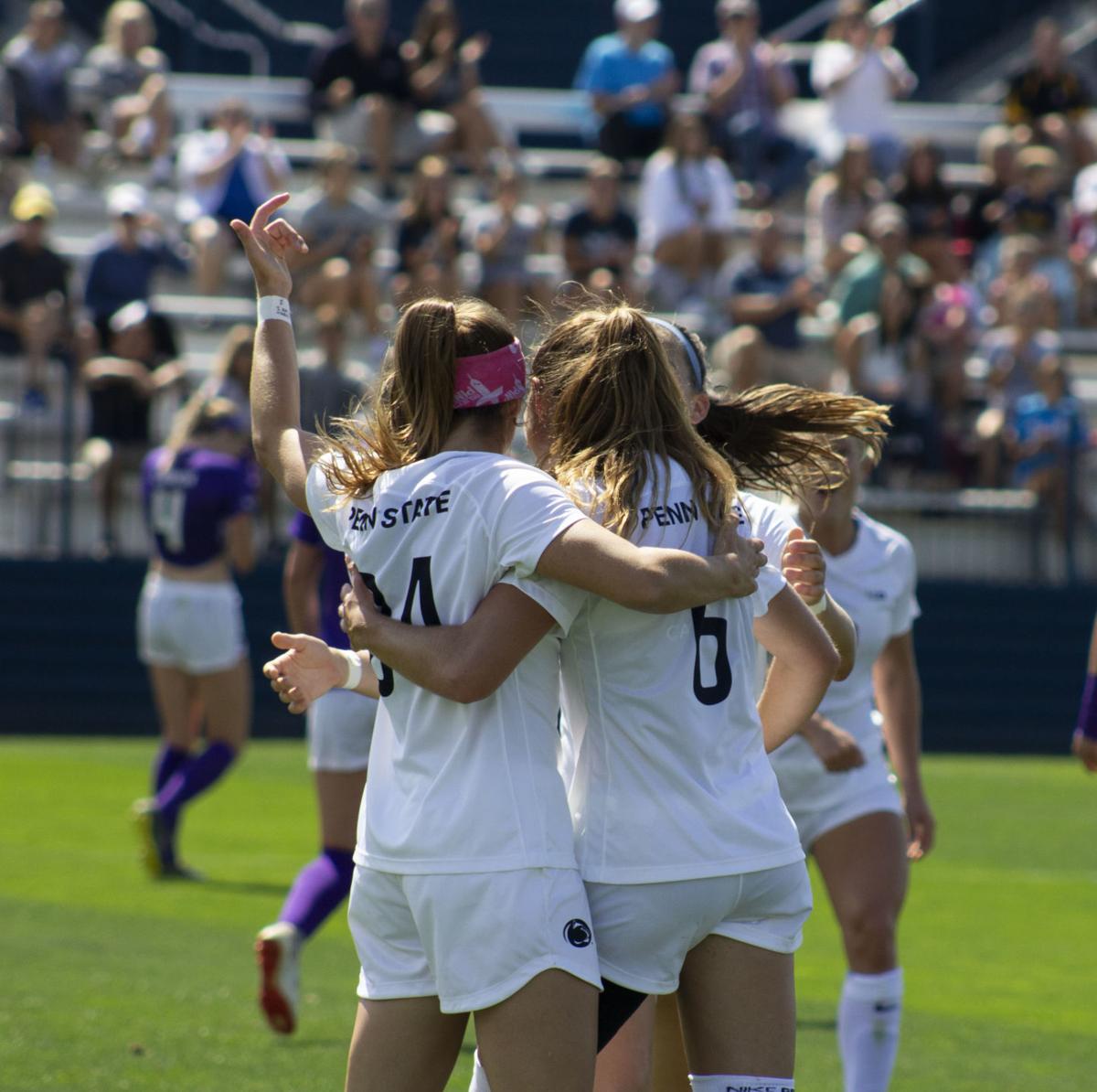 When they were kids in Parker, Colorado, Ally and Drew Schlegel spent most of their time together outside.

They took after their father, a former Kentucky football player who fostered a love for the outdoors in his children.

Whether it was playing pick-up sports in their neighborhood or hiking with their dad, the duo was rarely found inside.

“Me and my brother just grew up as kids that were always outside, always playing on the street,” Schlegel said. “We’re just kind of little rugrats.”

Nearly two decades later, the partners-in-crime are no longer geographically close, but they still spend most of their time in green grass.

Drew followed in their father’s footsteps and became a fullback at Kentucky. Ally wanted to join Pop Warner too, but not even a PowerPoint presentation was enough to convince her parents to let her try out.

Instead, she used her athletics gifts playing soccer. Now in her redshirt season with Penn State women’s soccer, it’s fair to say her parents made the right call.

During Schlegel’s high school years, she was recruited and committed to Penn State after a stellar ninth-grade campaign.

But after an ACL tear derailed her sophomore season, Schlegel had to face the reality that if she wanted to continue climbing the U.S. Soccer Federation ladder, her days of high school soccer would have to end.

“I love my high school, I had the best time but I also tore my first ACL in high school, so I was out for my sophomore and junior year,” Schlegel said. “And then senior year, because of [the United States Development Academy], they wouldn’t let me play high school.

Her standout performances and her involvement with the Development Academy also earned her a spot in the USWNT youth setup — and ultimately captaincy of the Under-18 team she played for.

“Going to camp and playing for my country were some of the best experiences I had,” Schlegel said. “Representing your country is not something that you always get to do and not something that everyone gets to do, so I think there’s a pride and a really big blessing that comes with that.”

But Schlegel saw herself playing at Jeffrey Field before she earned these accolades.

In fact, she committed to Erica Dambach’s program — somewhat hastily — at 15.

All the convincing and the Penn State dream aside, Schlegel has truly found the place she belonged.

“I think in my heart, I was like, something told me to do this and I’m doing it,” she said. “Everything was just a pleasant surprise. I knew that I was surrounding myself with the best people, so everything else like the academics and you know, all that that comes with it was just like the best little gifts.”

But after waiting three years after committing to Penn State to finally don the blue and white, a knee injury pushed her Nittany Lion debut back another year.

She had her second ACL tear in her first year with the Nittany Lions before even playing a match. After the injury, she remained with the team as she started her rehab and was awarded Rookie of the Year without logging a single minute.

Her mere presence was enough to make an impact on her coaches and teammates.

Dambach also had high praise for Schlegel and her mindset on taking on the redshirt year.

“Talk about embracing your role and really making sure you can have an impact regardless of your number of minutes,” Dambach said. “Even though she had to redshirt due to injury, she put the time and invested in her teammates enough that at the end of the season, they voted her rookie of the year. It tells you everything you need to know about Ally Schlegel.”

It was also an important opportunity for Schlegel to reshape herself as a person and a teammate.

During her redshirt year, her teammates really kept her engaged as her mind was going other places with her injuries.

It helped her realize her existence is not limited to the sport she loves.

“I had a great time learning how to be a teammate and learning how to make myself matter in a different aspect other than soccer,” Schlegel said. “I think that a lot of times for us, our identity gets worked in the athlete that we are, and especially being able to play.”

She also credited her class of players – Asman, Maddie Myers, Rachel Wasserman, Caitlin Haislip and Kelli Beiler – for being her “bouncing board” whenever she needed something.

“They were just good to have, because not only could they support me, but they could also give me that tough love at times when needed,” she said.

With all the injuries and rehab behind her, Schlegel is flourishing in her maiden season of college soccer.

She has scored a goal in four straight games, often important ones to clinch a positive result.

She also received Big Ten accolades as Freshman of the Week two weeks in a row, while picking up the Offensive Player of the Week award this week.

She brings tenacity and flexibility to the team as a workhorse and pressing hard no matter if she is playing striker or even defensive midfielder from the first to the 90th minute.

Dambach has even called her out for almost throwing her body in harm’s way too much.

It all came natural to her, though, as Penn State exemplified that blue collar attitude and fighting along with her teammates on the pitch.

Schlegel also credited her teammates for putting her in the position to succeed with her hot streak and also actively thinking about how she could keep it on. However, it was the positive results and being back that counts the most for her.

“I think being able to be a contributing part right now has been very confidence-boosting and just a big part for me getting back to my old ways and looking forward to the future growing and becoming a better player.”