Midfielder/defender, Kate Wiesner (6) celebrates after scoring during the match against No. 3 Stanford on Friday, August 23, 2019 at Jeffrey Field. 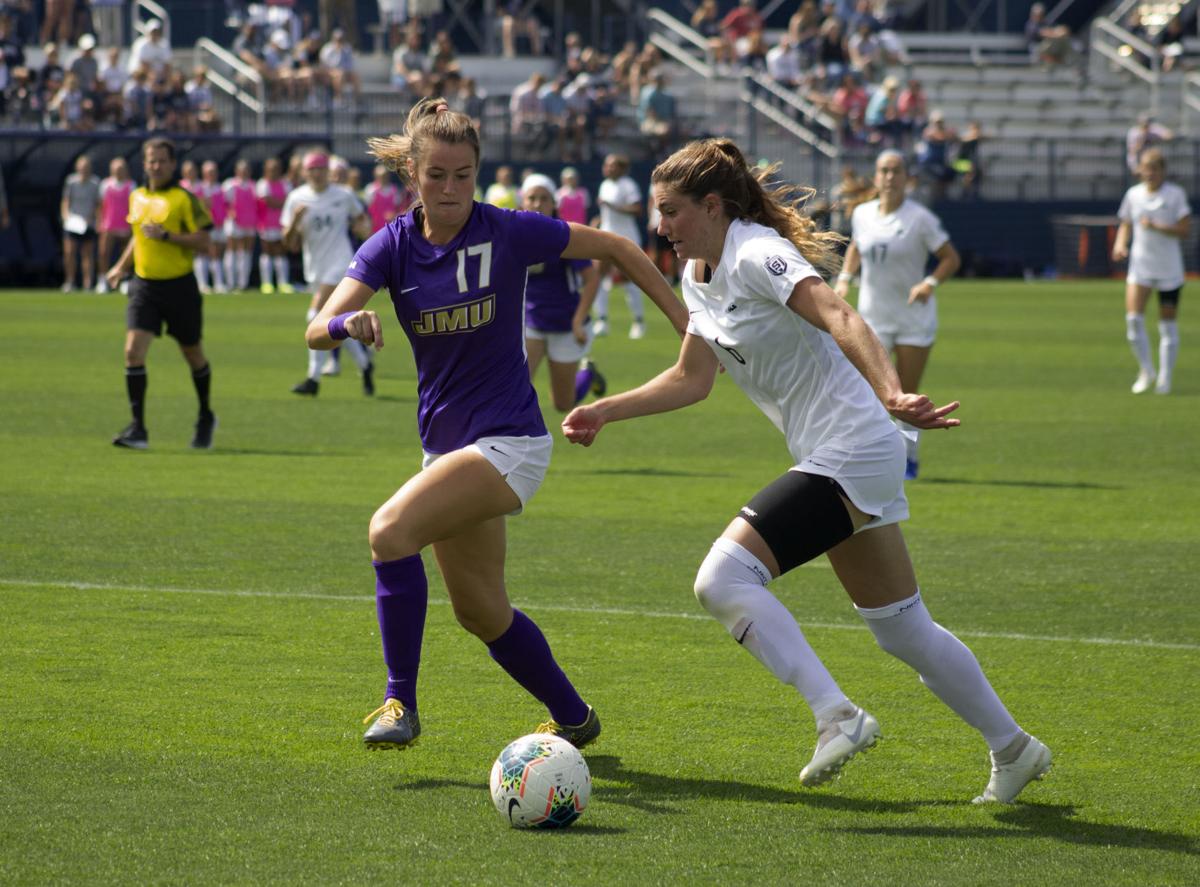 Midfielder/defender, Kate Wiesner (6) celebrates with Defender, Ellie Jean (14) after scoring during the match against No. 3 Stanford on Friday, August 23, 2019 at Jeffrey Field.

As the sun was beginning to set on a cool Friday evening in August, Kate Wiesner found herself near midfield, ball at her feet, with an abundance of open space before her.

She was only 34 minutes into her college career, but surged toward the defense of then-No. 3 Stanford with the confidence of a hardened veteran.

Then, as her defenders backed off at the edge of the 18-yard box, the ball flew off her right foot past the goalkeeper’s outstretched arms and into the bottom left corner of the goal.

Swarmed by her teammates amidst the roar of over five thousand spectators at Jeffrey Field, the freshman was already absorbed in the limelight that comes with playing for Penn State.

“It was pretty incredible,” Wiesner said. “I was pretty overwhelmed in the moment, didn’t really know what to do with myself.”

Moments like these are a testament to why Wiesner was the top-ranked player in the 2019 recruiting class.

The native of Monrovia, California, just outside of Los Angeles, took a giant leap in her young career when she decided to leave behind her big-city surroundings and the sunny SoCal skies for a small college town in central Pennsylvania.

However, Wiesner has fully embraced her transition to Happy Valley, where she will call home for the next four years.

“State College is definitely a little different than Southern California, but I absolutely love it here. It’s my new home,” she said. “The people here are great. My teammates have really helped with the transition, with college, and I’m super happy here. I love Happy Valley.”

Despite the long distance from her hometown, Wiesner knows that she will always have the support of her family back in the Golden State, especially her parents, who have been her backbone since the beginning.

“I’m an only child so growing up it was just me and my parents, but they’ve always been a super huge part of my support system. They’re my rocks,” Wiesner said. “They’ve supported me through my whole soccer career and they’re alright with me moving all the way across the country, so I’d say I lean on them a lot.”

Penn State’s outstanding reputation in women’s soccer surely plays a role in convincing players of Wiesner’s stature to commit to its program. Just months into her collegiate career, the freshman is already aware of the opportunity she has at Penn State to take her talent to the next level.

“It’s such an honor to play for Penn State, obviously coach Dambach is incredible and she has helped build some of the best players in the world, so I’m just trying to soak up all the wisdom I can and just make the most of my experience here and try to be the best player I can,” she said.

When Wiesner steps onto the soccer pitch, she radiates the kind of world class brilliance that turns heads every time she touches the ball.

With her electric pace and savvy movement on the ball, it only makes sense that Wiesner likens her own talents to those of U.S. women’s national team star Tobin Heath.

“I think in the World Cup, watching [Heath] play was kind of fun,” she said. “I like to be that creative player in the attack and get in line, get some good service.”

Her versatility a complement to her exceptional ability, Wiesner has spent time playing in midfield as a left winger, as well as in defense as a left back.

“I think I’m a pretty creative player, so I like to pop into different spaces on the field,” Wiesner said. “I think our attack is really free-flowing. They give us a lot of freedom, so I just try to get in there and make things happen wherever they put me.”

While she’s fierce on the field, Wiesner’s beaming smile and poised demeanor off of it show a different side of the 18-year-old phenom. Mature far beyond her years, Wiesner’s disposition has certainly not gone unnoticed by coach Erica Dambach.

“[Wiesner] is as steady as they come both on the field and in person. She's a rock,” Dambach said.

“She gives strength to all of us, even the upperclassmen, just seeing how steady she is, seeing how levelheaded. She always has a smile, she loves to train, she’s strong in her beliefs and she’s just a privilege to coach.”

In each of the first eight games of the 2019 season, Wiesner lined up alongside a considerably experienced Penn State back four that includes redshirt seniors Kaleigh Riehl and Ellie Jean, who have both remarked on the freshman’s abilities and effortless transition to the college game.

“[Wiesner] has been huge for us,” Riehl said. “She’s super smart, very creative, especially in the attack, pretty gritty on defense too. I think she has come in pretty seamlessly.”

In the eyes of her teammates, Wiesner has created the impression of a seasoned pro despite her freshman status.

“Kate has fit in perfectly in our program, her standards are excellent. She has a great personality, she fits in right with our team,” Jean said.

“Honestly, she plays like a veteran on the field. We know that we can rely on her, that we can trust her. She has been playing great and obviously she still has a lot to learn, but so far she has been doing really well and I think she’s enjoying it too.”

Jean, a mainstay at right back, admitted that while she has always been one to take new players under her wing, Wiesner has handled herself just fine on her own.

“She almost doesn’t need any help. She’s a veteran when she plays, she’s doing so great,” Jean added. “She’s teaching me as much as I’m teaching her.”

To anyone who watches her play, it’s clear that Wiesner’s talent may one day take her to the pinnacle of international soccer. She has already featured for the U.S. women’s national team at the under-15, under-17, and under-19 levels.

“Anytime you get to represent your country it’s a huge honor and I’m blessed to be able to have been part of the national team system and it’s been a ton of fun and it has helped a lot with my development and helped me make my transition to Penn State,” Wiesner said.

If her debut was any indication of what is to come, Penn State fans can look forward to watching Wiesner blossom into a world class talent. For now, she is just relishing the experience of playing the game she loves at a place where she feels at home.

“This is an incredible program and it’s such an honor to play here, so to be able to put on that blue and white jersey and step out on Jeffrey Field, it’s incredible and it’s by far the biggest thing I’ve ever been a part of.”