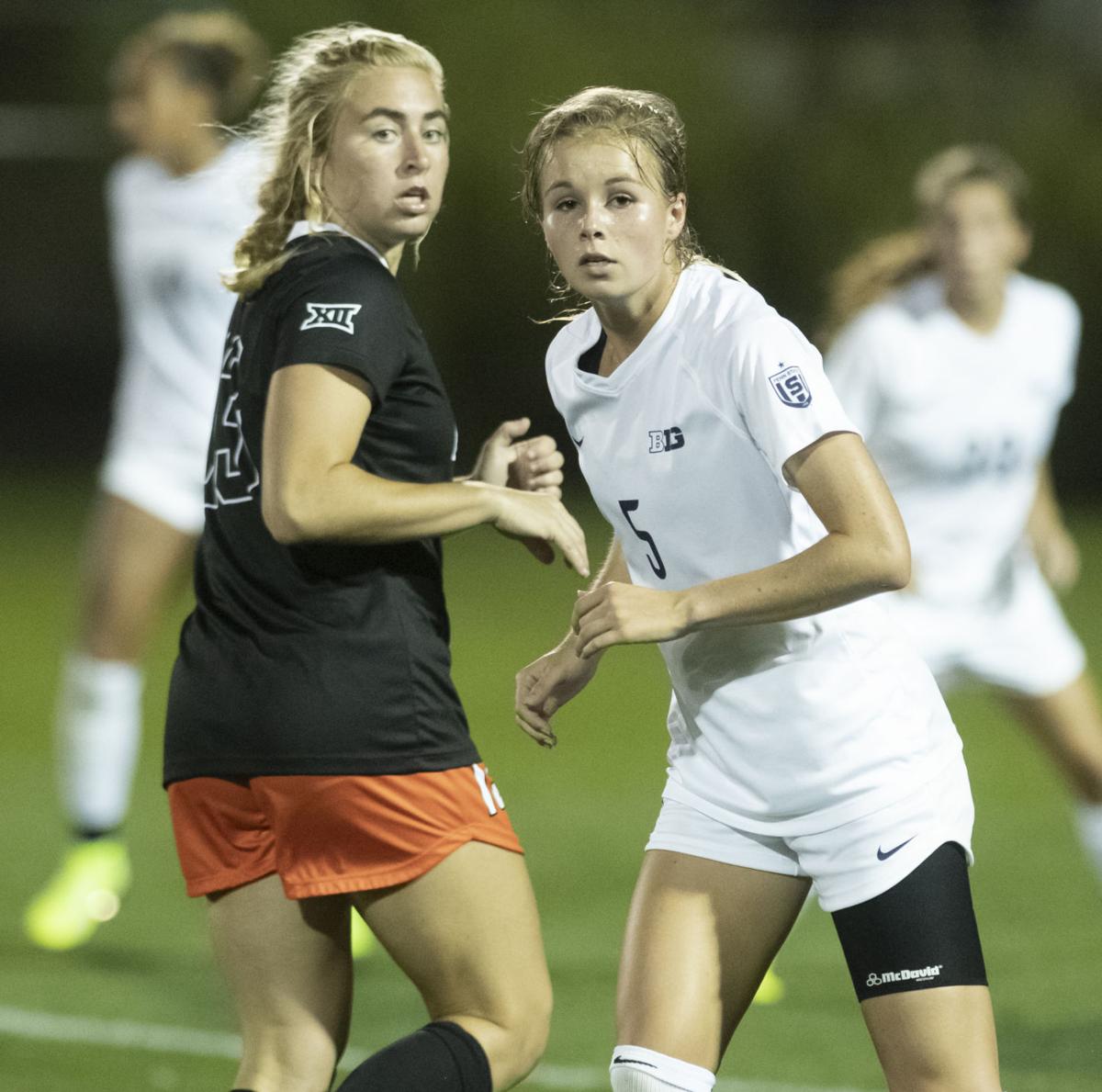 Midfielder Cori Dyke (5) and an Oklahoma State player look toward the play during the women's soccer game against Oklahoma State at Jeffery Field on Sept. 12, 2019. No. 8 Nittany Lions fell to the Cowgirls in second overtime, 2-1. 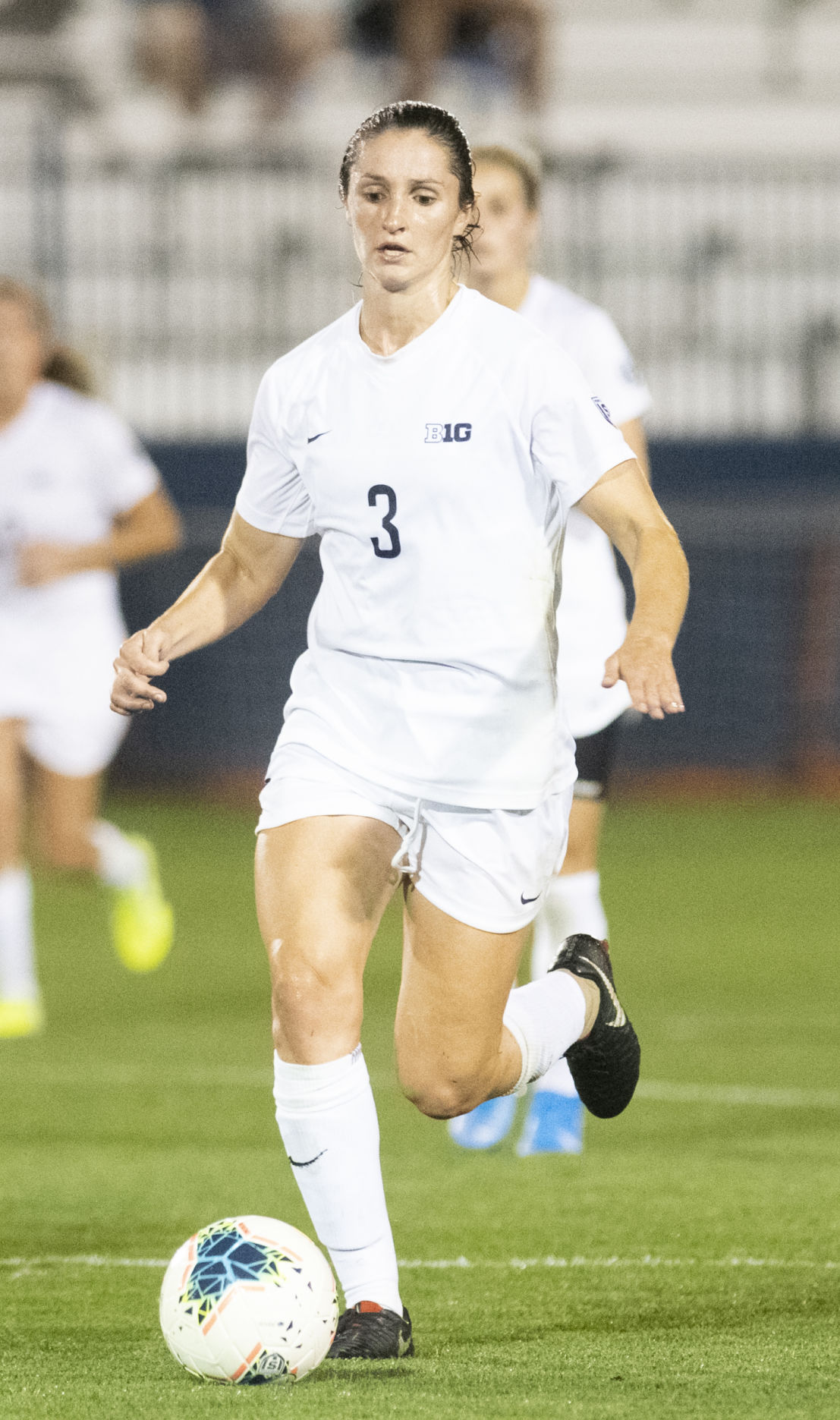 Defender Kaleigh Riehl (3) dribbles the ball during the women's soccer game against Oklahoma State at Jeffery Field on Sept. 12, 2019. No. 8 Nittany Lions fell to the Cowgirls in second overtime, 2-1.

She was able to position herself well in the box and tapped in the game-winning goal, sealing a 2-1 road win by the Cavaliers.

Schlegel gave Penn State hope in the 85th minute by latching on to Coffey’s free kick and score in her sixth straight game.

The Cavaliers opened the score with a Meghan McCool goal. She was able to capitalize on a bad Penn State clearance after Rebecca Jarrett wreaked havoc on the left side of the Nittany Lions defense. All McCool had to do for her seventh goal was to coolly tap it into the back of the net.

Virginia came out guns blazing, controlling the flow of the match early and it only took the Cavaliers 15 minutes to prove themselves in their first game on the road.

The first half was then dominated by Virginia.

The No. 4 team in the country amassed 78% of possession while creating 12 shots with five on goal. If it was not for Asman’s stellar performance between the sticks, the game would have gone way out of hand early on with multiple chances off McCool and Anna Sumpter.

When the Nittany Lions were content to stay back and defend, the Cavaliers looked to break through by quickly shifting play from side to side to look for openings.

The first and only shot on goal for Penn State was a Jordan Canniff attempt after Frankie Tagliaferri and Ally Schlegel, but it was saved comfortably by Laurel Ivory.

The Nittany Lions looked like a shell of themselves in the offensive end. Dambach had to tinker with the front line again in Abello’s absence and it showed with Penn State often being indecisive with passes and runs off-ball.

Early on in the second half, Penn State found its groove back by pressing Virginia while also making progress up front with direct balls. It was beneficial for the Lions to not have to build up all the way from the back.

Despite the sharper performance, Penn State still had little to show for on the stats column.

Errand passes and poor link-up play started to creep in and haunt the Nittany Lions, and Virginia started to regain the upper hand much like the first half.

Caitlin Haislip, who replaced Laura Suero early in the game, made a goal-saving tackle and McCool was in on goal again off a through ball in the 75th minute.

More injury woes hurt Penn State as 80 minutes in, Kate Wiesner suffered a knee injury in a run-in with Jarrett. The freshman was able to exit on her own power, though.

Peyton Linnehan had another good chance in the 84th minute. She was pushing forward into the box and fell to an opposition challenge. However, referee Khalaf Al-Latayfeh did not call a penalty.

The Nittany Lions will look to regroup heading into Big Ten play, with Michigan and Michigan State coming up next weekend.