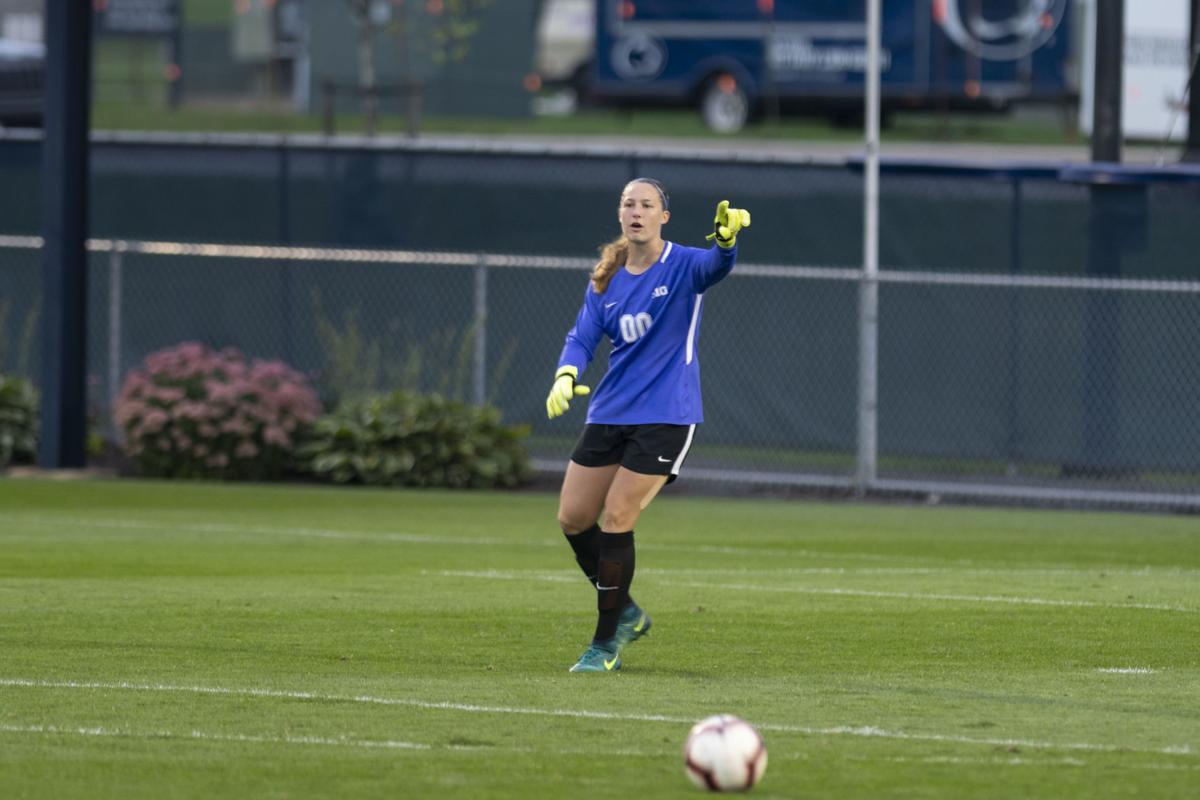 Goalkeeper Amanda Dennis (00) directs her teammates during the women’s soccer game against Ohio State at Jeffrey Field on Friday, Sept. 14, 2018. The no. 21 ranked Nittany Lions defeated the Buckeyes 4-0. 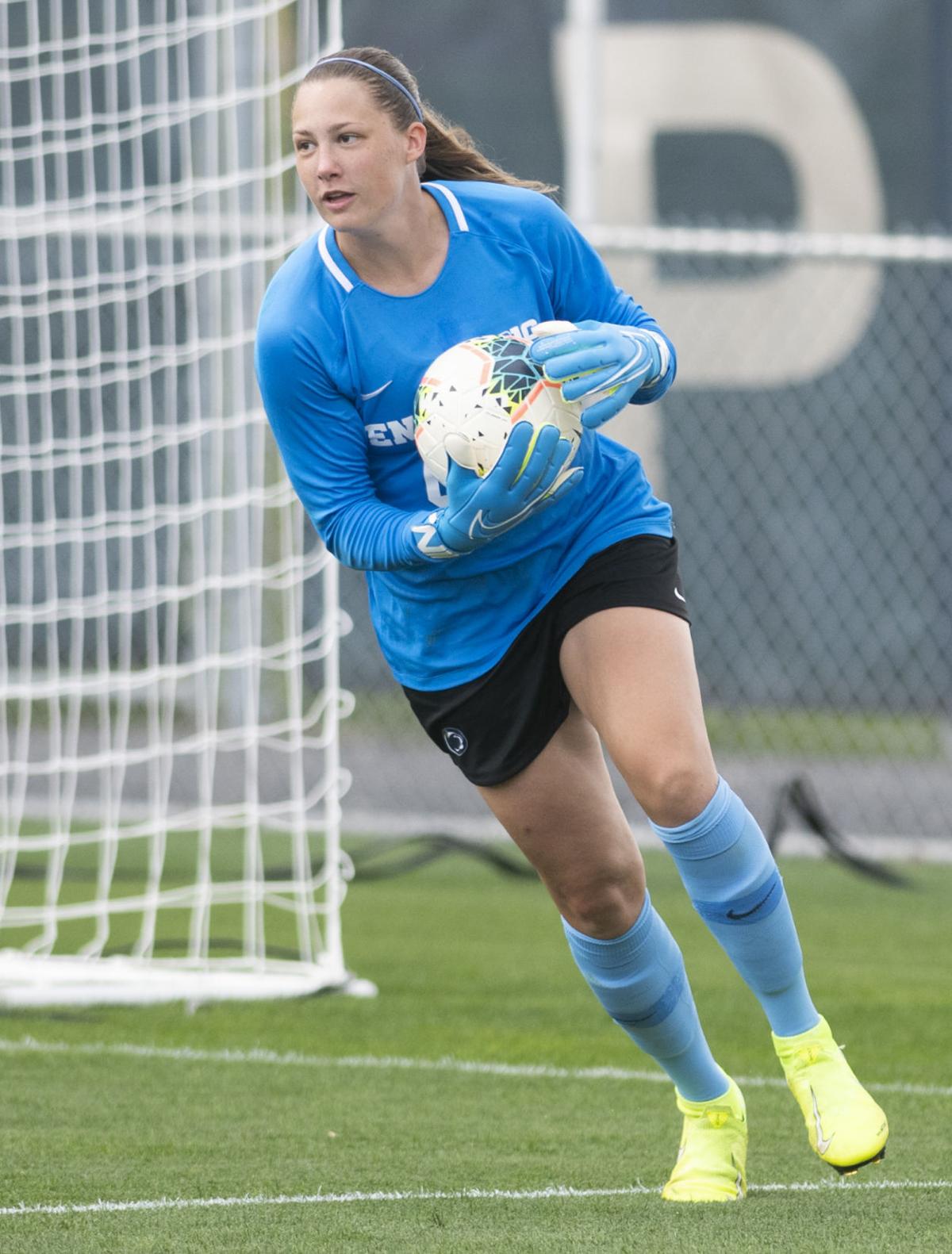 Goalkeeper Amanda Dennis (00) runs while carrying the ball during the women’s soccer game against Michigan State at Jeffery Field on Sept. 22, 2019. No. 17 Nittany Lions defeated the Spartans, 5-1. 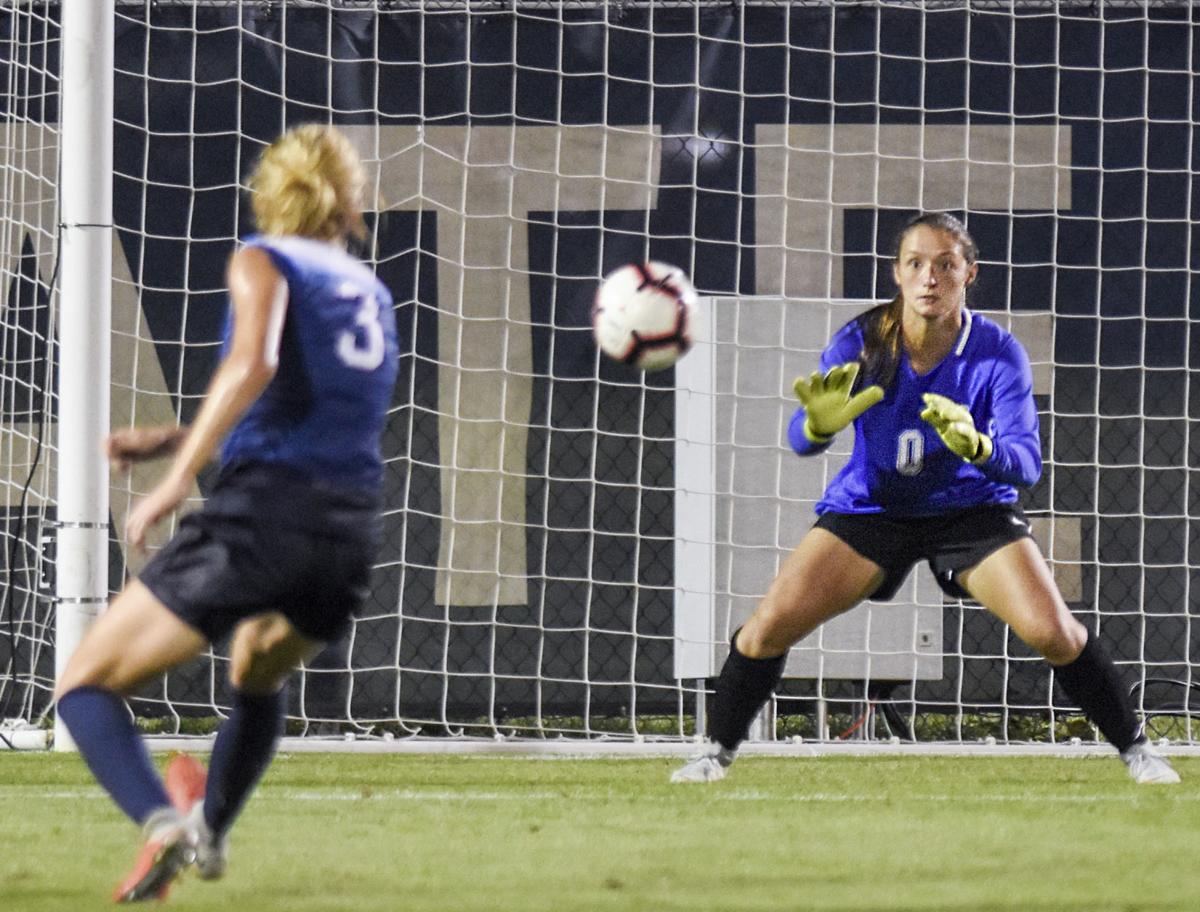 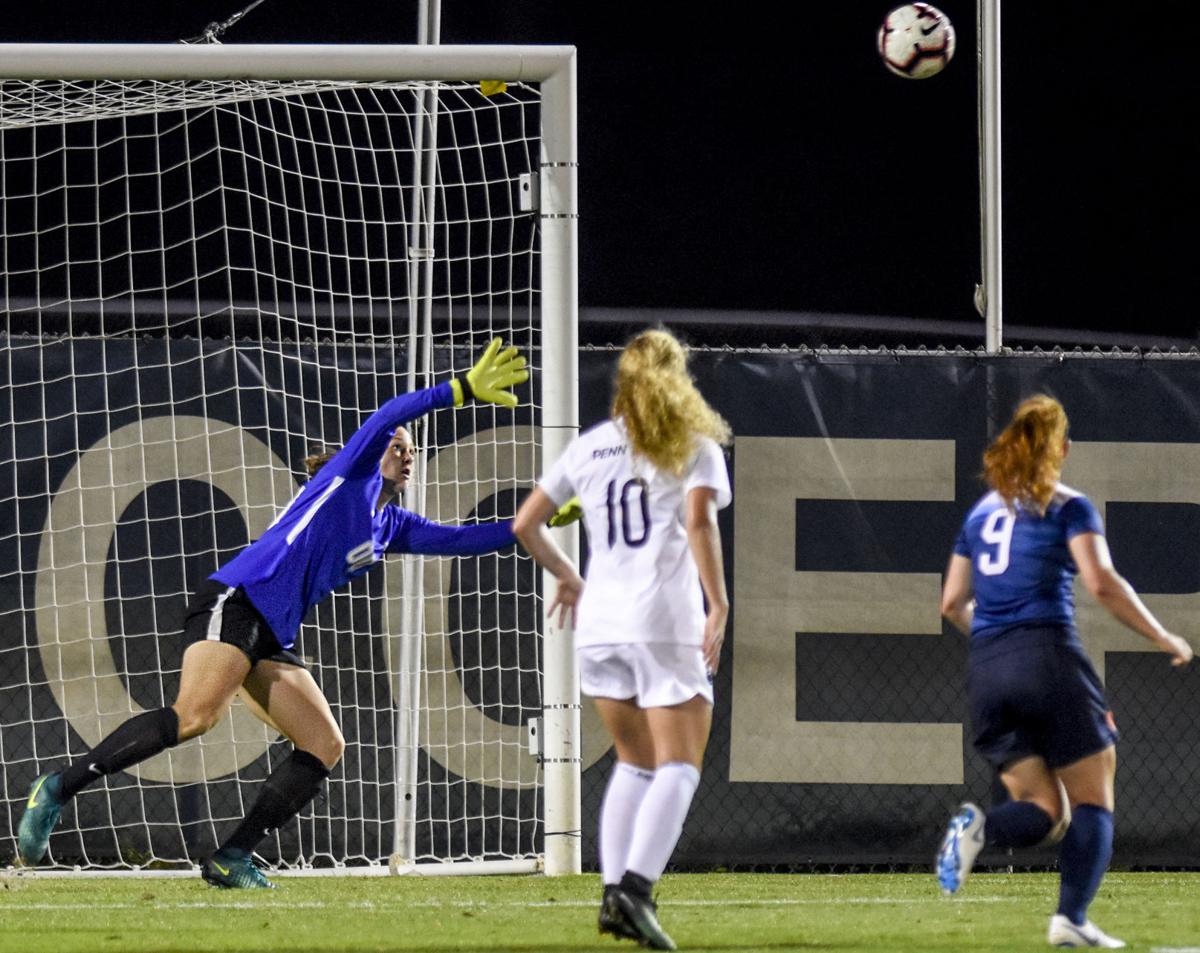 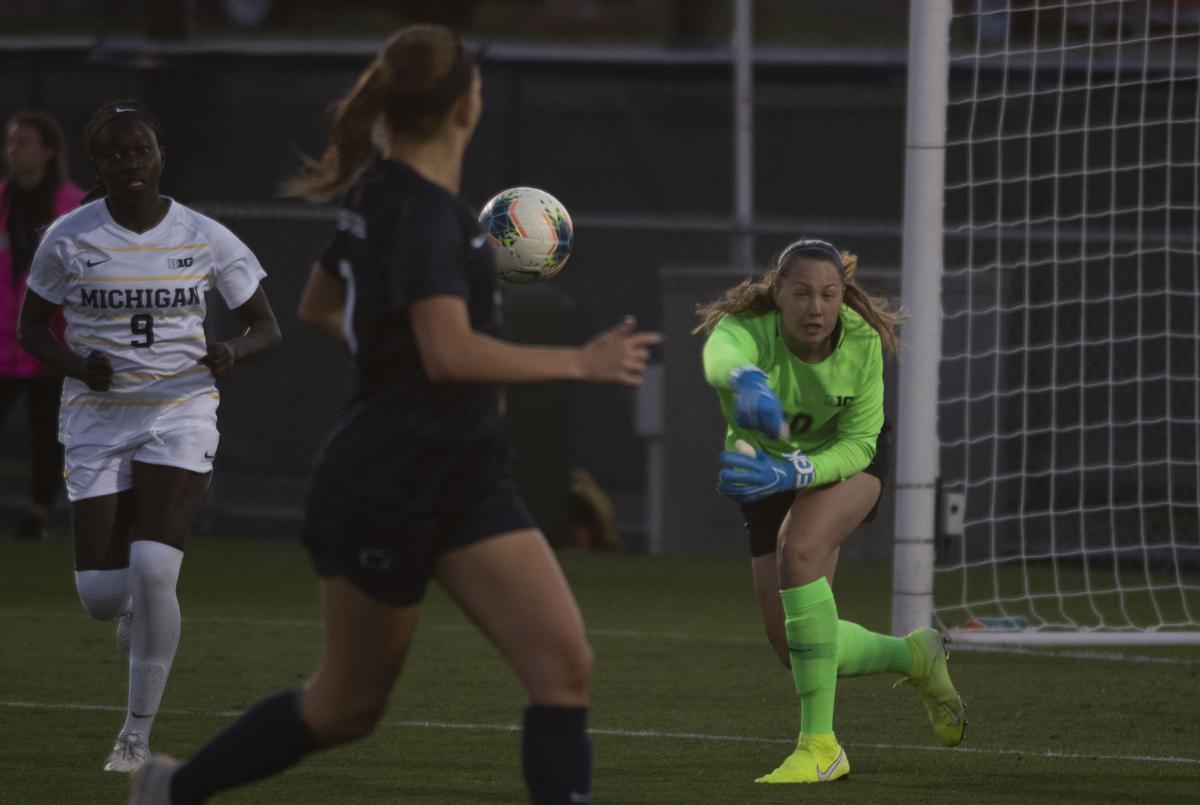 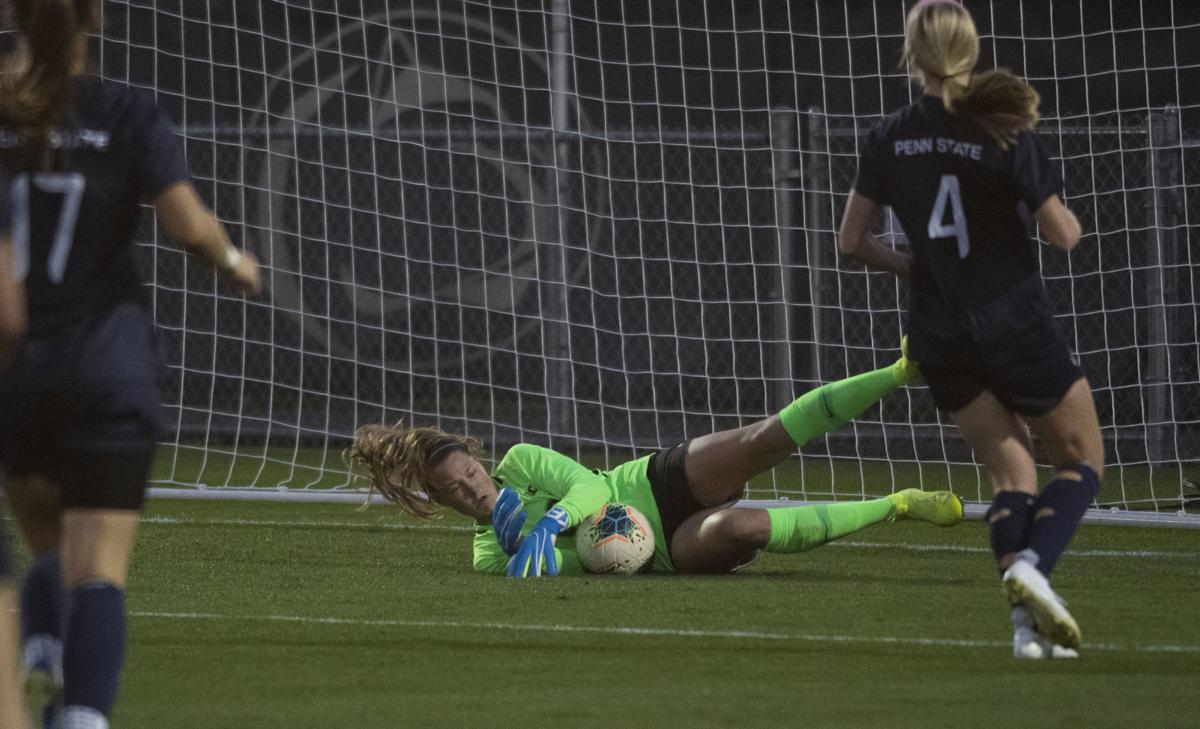 Goalkeeper Amanda Dennis (00) makes a save during the soccer game against Michigan at Jeffrey Field on Thursday, Sept. 19, 2019. Michigan defeated Penn State 1-0.

Still in her infancy as a goalkeeper, Amanda Dennis heard something interesting.

After transitioning from field player to goalie as a 12-year-old — a late age to make such a switch — Dennis’ club coach told her that she only had to make two or three saves per game to become a college ‘keeper.

From that point on, the San Diego native altered her mindset between the pipes and found success as a result.

“You can’t script soccer,” Dennis said. “You can’t go, ‘Okay, I’m going to get a shot in the fifth minute.’ You can get all three of your shots in those first 10 minutes and the rest of the game you’re not doing anything, but you still have to remain locked in focus.”

Dennis, an NSCAA All-American her senior year of high school, did just that and earned a ranking as the No. 2 goalkeeper in her class.

But there was a problem. For however accomplished she was, she was heading to a place across the country where nearly every one of her predecessors was as credentialed, if not moreso, than she was.

Penn State, in recent history, has been a powerhouse in goalkeeping. Alyssa Naeher is a household name after taking over as the No. 1 of the U.S. women’s national team, while Britt Eckerstrom had just capped off her senior season with eight straight shutouts en route to an NCAA title before Dennis’ arrival.

For Dennis, that legacy was exactly what she wanted to build on.

“There’s an opportunity that I saw, I definitely could have gone to any Southern California school,” Dennis said. “But I decided, you know what, for four years, I’m going to go do something completely different.”

Four years later, she has become team captain and a pillar for the Nittany Lions.

“It’s a huge legacy to come in here and be a Penn State goalkeeper,” Dennis said. “There was a lot of pressure coming in with Britt Eckerstrom being as good as she was and obviously Alyssa Naeher was here, so all goalkeepers at Penn State are, you know, kind of legends.”

However, Dennis did not expect the legacy to begin that quickly.

She had to go through the process of being thrust into the starting role rather unexpectedly in lieu of U-20 World Cup-bound Rose Chandler, then losing and regaining her consistent starter role in a position that usually feature very few changes.

Mental toughness is important for any goalkeeper, but especially for Dennis early in her career when she found inconsistent playing time.

After losing out to Chandler, Dennis saw that as a chance to compete in the backseat while working on other facets of her game.

“Going into my sophomore year, it’s like okay, I know the ropes of college soccer and it was a nice transition to focus on technique. I know it’s where the standard is that I need to be at,” Dennis said.

After making that realization, Dennis took it upon herself to push herself to another level on and off the pitch.

“That year was a huge turnaround for me personally,” Dennis said. “In the classroom, just as a teammate, as a player, having a ton of meetings with the coaching staff — just figuring out how to be the best version of myself. That’s honestly the freshman to sophomore transition.”

Dennis was also appreciative of the coaches being considerate with the situation, and assistant coach Tim Wassell’s goalkeeping union certainly helped Dennis’ case.

“The nice thing about sophomore year is that the coaching staff refused to name a No. 1 goalkeeper even though Rose [Chandler] played the majority of the season,” Dennis said. “It was us going neck and neck the whole entire season which kept my competitive level and that drive up.”

“Honestly, that’s why I came to this program because I knew that no other program can emulate that.”

Fellow senior goalkeeper Sarafina Valenti, who forged a great bond with Dennis, saw the union stem from day-to-day scenarios, with the keepers constantly complimenting each other even in practice when the others make great saves.

“Mandy and I are really close,” Valenti said. “But as soon as we get into a goalkeepers’ union, it’s just encouraging each other. You’re so happy for them that they’ve just made a big save, even if it’s on your shot. We want to keep it as competitive as possible but also all smiles. ”

But ultimately, it fell upon Dennis’ shoulders to keep herself going and in contention with the No. 1 spot.

“My sophomore year when I wasn’t playing as much, honestly, [mental toughness and elasticity] was the biggest part in training,” Dennis said. “I would just stress myself out like I would just go, go, go, go, go in 5-v-5 and tire myself out until I couldn’t even speak anymore, like my mouth was so tired.”

That was definitely a fruitful part of Dennis’ personal growth as a student athlete. It also happens to coincide with the inherent pressure of being the goalkeeper.

It came ingrained with the position she features in. The job of goalkeeping entails a lot of separate obligations like communication and decision making, but the end goal is to keep the ball out of the back of the net.

Dennis, throughout her years of goalkeeping, has developed and honed in on a specific mindset that exists in every goalkeeper in one way or another.

“It’s a weird balance of practicing this forgetfulness in a way as a goalkeeper,” Dennis said. “If I could count however many goals have been scored on in my entire life, that can get really overwhelming because that’s our singular job — keep the ball out the back of the net.”

“Sometimes you just have to bring it back to that simplistic idea. Just go keep the ball out the back of the net. You can get so wrapped up into technique and everything like that and it can get really overwhelming.”

For Dennis, though, there were her fellow seniors that helped her out throughout the process.

“[Kaleigh Riehl and Ellie Jean] were just freshmen and they were already playing lights out,” Dennis said. “So when I got there, they were really helpful and really instrumental in showing me the ropes and make me comfortable. I was very naïve my freshman year making a lot of mistakes, and those guys just picked me up and brought me along.”

As much as the experience on the team can propel and lift a young player, it is ultimately Dennis’ job to excel in a position that’s difficult.

Yes, goalkeepers barely move around when compared to the full backs and midfielders that may go seven miles per game. However, it’s the mental aspect in an unpredictable game that pushes a keeper to the limit.

So while it might be true that she needs to make only two or three saves per game, the goalkeeping position is by no means simple.

It is that inner focus that helped her succeed as a keeper and also as a person. The stability in the team structure also really assisted in that department.

That is partially because of the experience coach Dambach and her staff has with the team. The team’s culture is based on three pillars — attitude of a champion, blue collar and united family — and the coaches have to apply those differently in accordance to the team that year.

With all the history they have, though, it has become a more expedited process and something that is ingrained deep into the program.

“Yes, we have all these values and it’s obviously a really difficult thing for the coaching staff to deal with every single coaching staff in college soccer,” Dennis said. “But I think that’s the thing about this program is that we do it the best consistently and it’s so obvious. That’s why we’ve won however many Big Ten titles, it’s like people can’t compete with us.”

“The three pillars are not just three set of phrases on a piece of paper on the wall – that’s something that we really live and breathe by.”

Playing for Penn State to Dennis opened up her eyes to a lot of things, but none trumps the support she gets as a member of the community.

“There’s just always these little moments where a fan comes up to you and you have no idea, you’re just playing college soccer — we’re amateurs, not even professionals — like how we’ve impacted their life or their kids,” Dennis said. “It’s hard for college players to realize that they put our poster on the up on the wall just like they do the national team.”

Dennis, now understanding the impact she has, turns it into fuel to keep herself going whether it’s for the remainder of the NCAA season or a potential future NWSL career, like Dennis anticipates having.

“Those moments that you question just like any athlete does, ‘Should I keep playing? Is it worth it?’” Dennis said. “Stuff gets hard, life gets hard, but those are the little moments where you’re like, ‘Wow, this is a whole lot bigger than me,” and it just drives you on.”