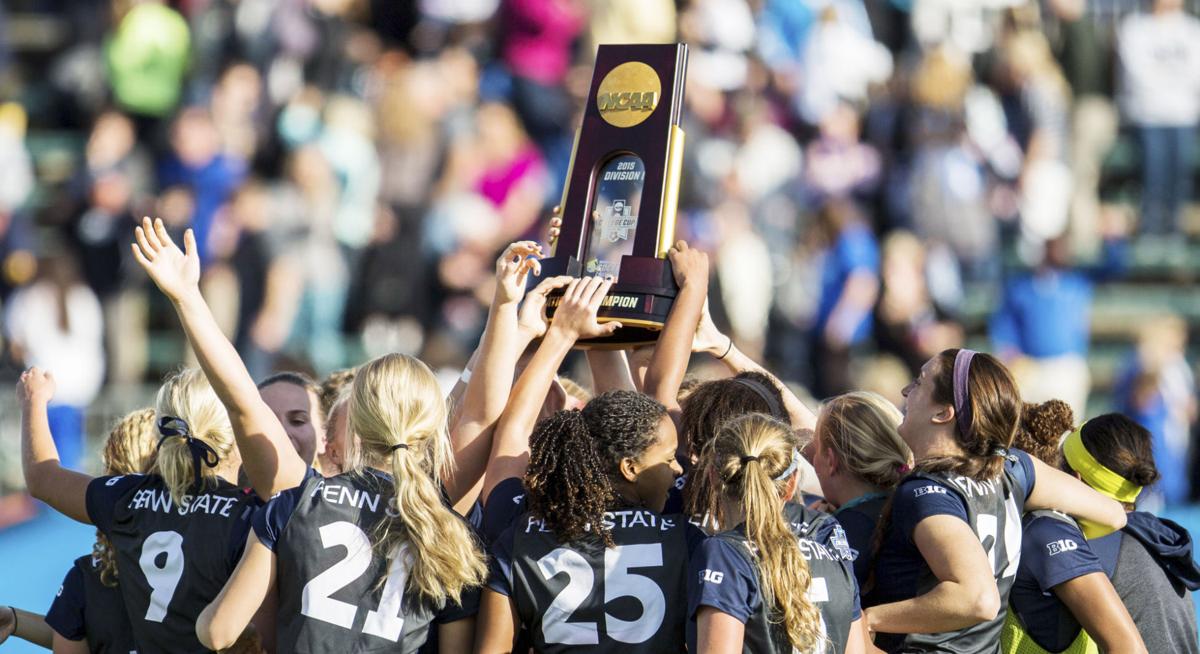 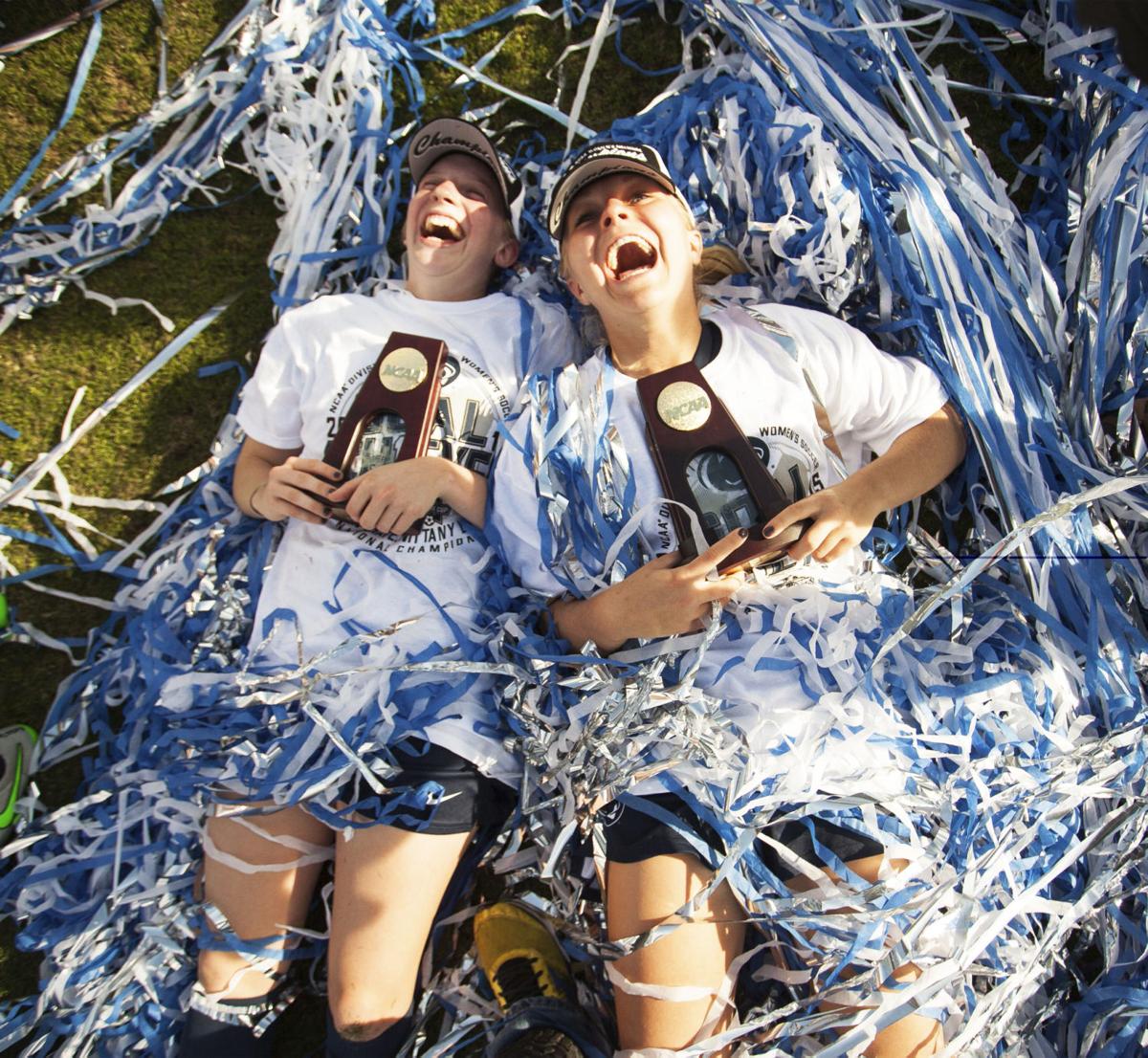 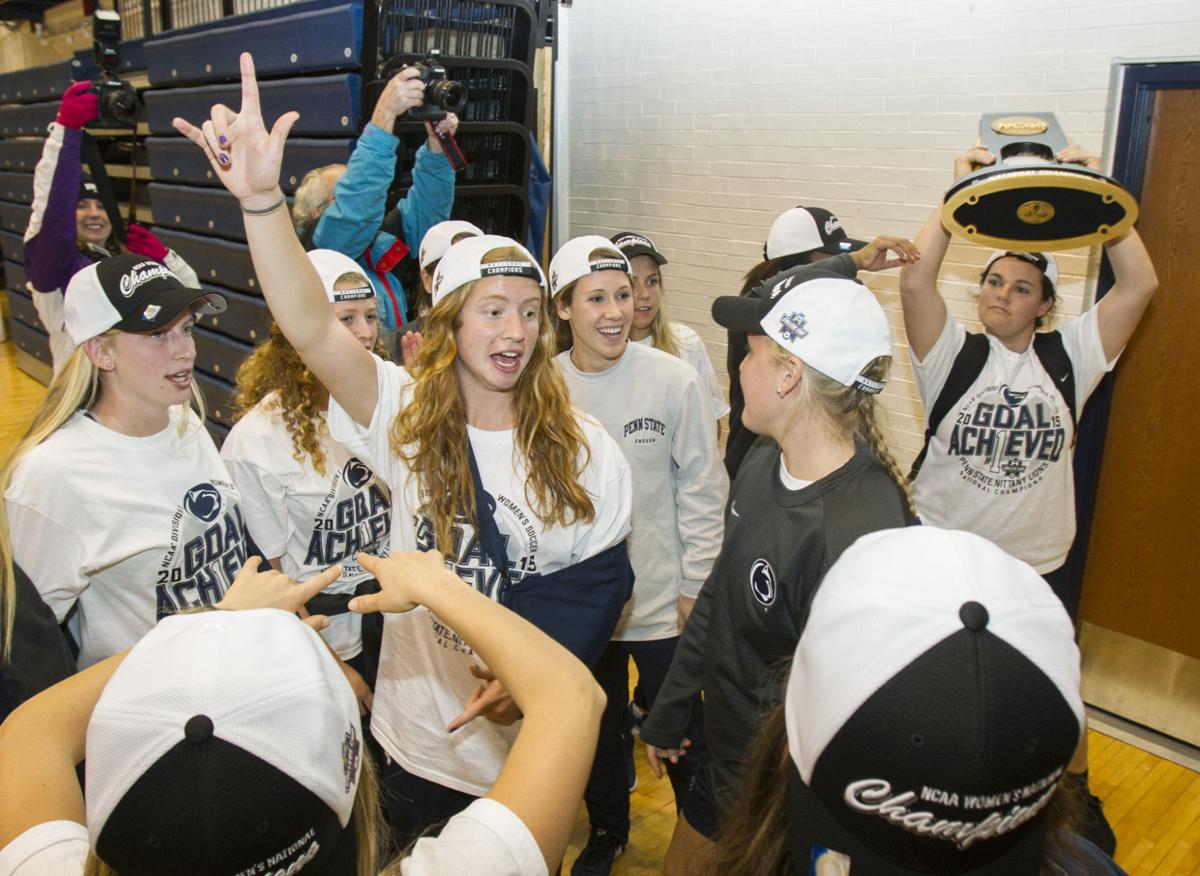 The Penn State women’s soccer team celebrates in Rec Hall after claiming their first national title in school history over Duke earlier in the day on Sunday, Dec. 6, 2015.

When Raquel Rodriguez tapped the ball into the back of the net in the 71st minute, the Penn State players knew this goal would elevate the program to new heights.

“When she got the ball it was like the sense of calmness because I knew she’s done it multiple times in practice,” then-sophomore midfielder Emily Ogle said. “That’s what carried us through – once we got that goal, we weren’t letting any in, we knew that we were going to win this thing.”

The Nittany Lions had won the national championship.

Penn State had always been a staple in the NCAA Tournament, but it only broke through to the final stages in a few occasions. Before 2015, there was 2012, when 2015’s seniors were only freshmen and North Carolina dealt a 4-1 blow to halt the dreams of the Nittany Lions’ first College Cup win.

It was also a historic occurrence for Penn State, who rode senior goalkeeper Britt Eckerstrom’s eight-game shutout streak to end the season, while Rodriguez herself earned the Mac Hermann trophy for the best collegiate player in the country.

It was the perfect ending to an illustrious collegiate career for the seniors on the squad.

“As soon as the ref blew the whistle, it was weird,” Rodriguez said. “All of a sudden, we made it and it was honestly the cherry on top."

Eckerstrom resonated with the season being a culmination of everything that came before in her collegiate career, but also an important juncture of the team finding its identity.

“Through my career here we find some of those values that defined our team in blue collar, attitude of the champion and united family,” Eckerstrom said. “We nailed those down while I was there and I think we were able to lean on all those values, especially in the last year.”

Eckerstrom pinpointed two instances in the 2015 season that sparked the run along with the “three pillars” of the Penn State women’s soccer culture. One of them was how the team worked together as a singular unit after an early-season win against No. 2 Stanford, instilling the belief that this team can go far.

The other one was not as positive.

“We tied against Nebraska leading up to the championship and we all felt like we lost,” Eckerstrom said. “I remember the next day, they showed us clips of every 1-v-1 duel we lost. They were like, ‘If we’re going to lean on these values, we can’t just talk – we got to actually perform and execute those values.’”

“So they showed us all those clips and we’re like, ‘We can’t get beat like that over and over again.’”

All the trials and tribulations that 2015 season led to Penn State making the breakthrough once again after 2012, with the Elite Eight being a crucial moment and a barrier to break down.

“I honestly think that one of the hardest games is the Elite Eight game. That’s where I, beside the year we won it, got knocked out my other three years,” Ogle said. “A huge advantage to the 2015 season was that the Elite Eight game was at home and we played West Virginia at home.”

The perks of being the No. 1 seed in the quadrant proved to be huge in making the final push, especially mentally for the team.

“As soon as we won that game, I think everyone had this feeling of, ‘We can do this thing, we can win it all,’” Ogle said. “’Why stop now? We can easily do this.’ So I think that was one of the turning points in the NCAA Tournament where we were building a lot of momentum heading into that Final Four.”

The team dynamic was also very interesting with a very distinct blend of players. Apart from experienced starters like Rodriguez, Eckerstrom and Mallory Weber, the team had to lean on a number of young players to play big roles.

Kaleigh Riehl and Ellie Jean are still on the latest edition of the team, while players like Ogle, Maddie Nolf, Marissa Sheva and Charlotte Williams all participated in the bulk of the games as underclassmen.

Sheva, a freshman winger who played in 26 games that season, did not come in with the expectation that she could be part of a team that could win it all. However, as the season progressed, it started to become more and more of a reality.

“As a freshman, there was definitely a moment when I was like, ‘Oh my goodness, you actually could not have asked for a better freshman year,’” Sheva said. “We came in having not played in as professional of an environment at Penn State and it was a grind, it was probably the longest season that most of us have ever played, so I think there was a bit of relief at the end.”

As the younger players blended in and proved their place in this championship-caliber squad, the team hit the ground running both on the field and off the field as a group.

The culture set in place by those before them was also a huge factor.

“We had a really good culture where it was okay to be tough on each other, to demand a lot out of each other,” Ogle said. “But in the end, we knew that everyone had each other’s backs and we were family and that anyone on the team would help anybody else, they would take care of each other.”

Eckerstrom, being one of the senior leaders on the team, saw everything come together at the right time with a very strong young core.

“The younger players on the team were totally on board and they’re ready to give everything they’ve got,” Eckerstrom said. “Rocky and I, we just want to win it really bad and that attitude along with what the staff is putting out, as you know, this is that we’re capable of, our expectations and standards. I feel like it went really well.”

A tricky part with college soccer is working consistently with the team’s chemistry. As sound as a system could be curated by a coach, the reality of college athletics means there would always be moving pieces.

That could be a troubling factor for a top-ranked team trying to gel in the 20-or-so matches available. However, Rodriguez remembered the 2015 squad being cohesive in the way the players played and their personalities.

“We had an excellent combination of players with characteristics that complemented each other so well,” Rodriguez said. “I think everyone did their job in an excellent way. All across the board, not only did we have depth, but also, we had a lot of talented players who were also hard workers.”

For Ogle, it was the overall close-knit relationships on the team that propelled the run.

“We were just a cohesive team on and off the field. Everyone on that team was a great person and so we all get along,” Ogle said. “When you have a team like that who gets along off the field, it really helps then with the performance on the field.”

It was a fairytale ending for the seniors, but for the younger players, it had them hungry for more. Although the dreams of another College Cup have not materialized, the 2015 season served as an invaluable experience for the team.

“I think it was more that we had a fantastic blueprint of what a national championship team looks like and what they do,” Sheva said. “This is what’s been successful for us in the past and if we want to get back to the Elite Eight, the Final Four? This is the standard that we hold.”