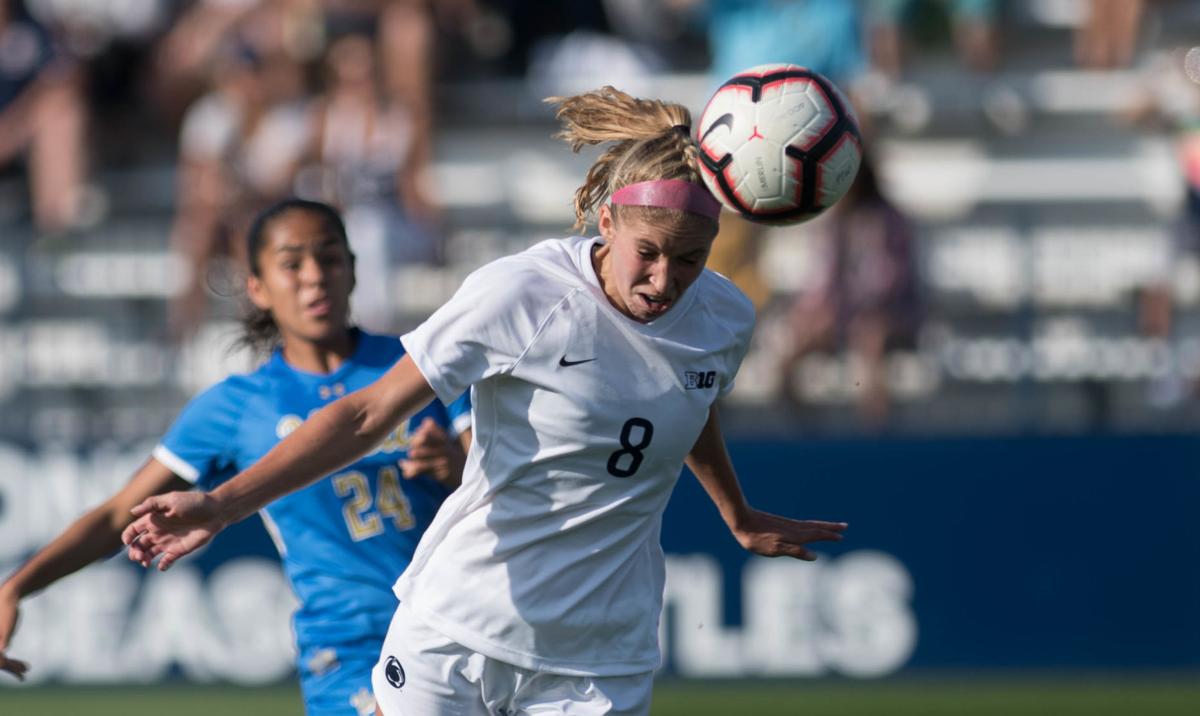 Penn State's Kristin Schnurr (8) heads the ball on goal during an early season matchup with No. 2 UCLA at Jeffrey Field on Saturday, Aug. 25, 2018. 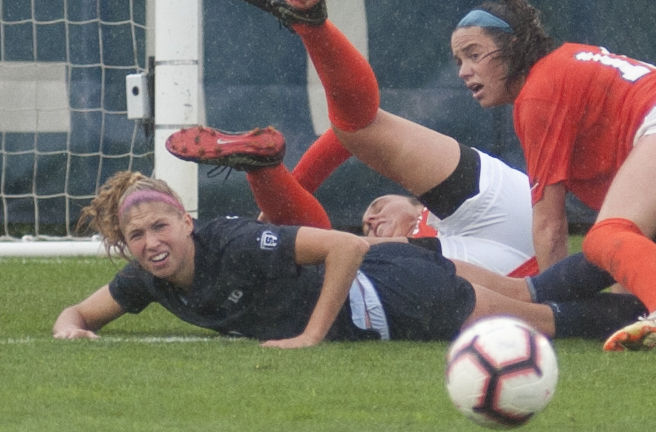 Kristin Schnurr (8) physically contests for the ball in front of the goal at Jeffrey Field on Sunday, Sept. 9, 2018. Virginia defeated Penn State 2-1. 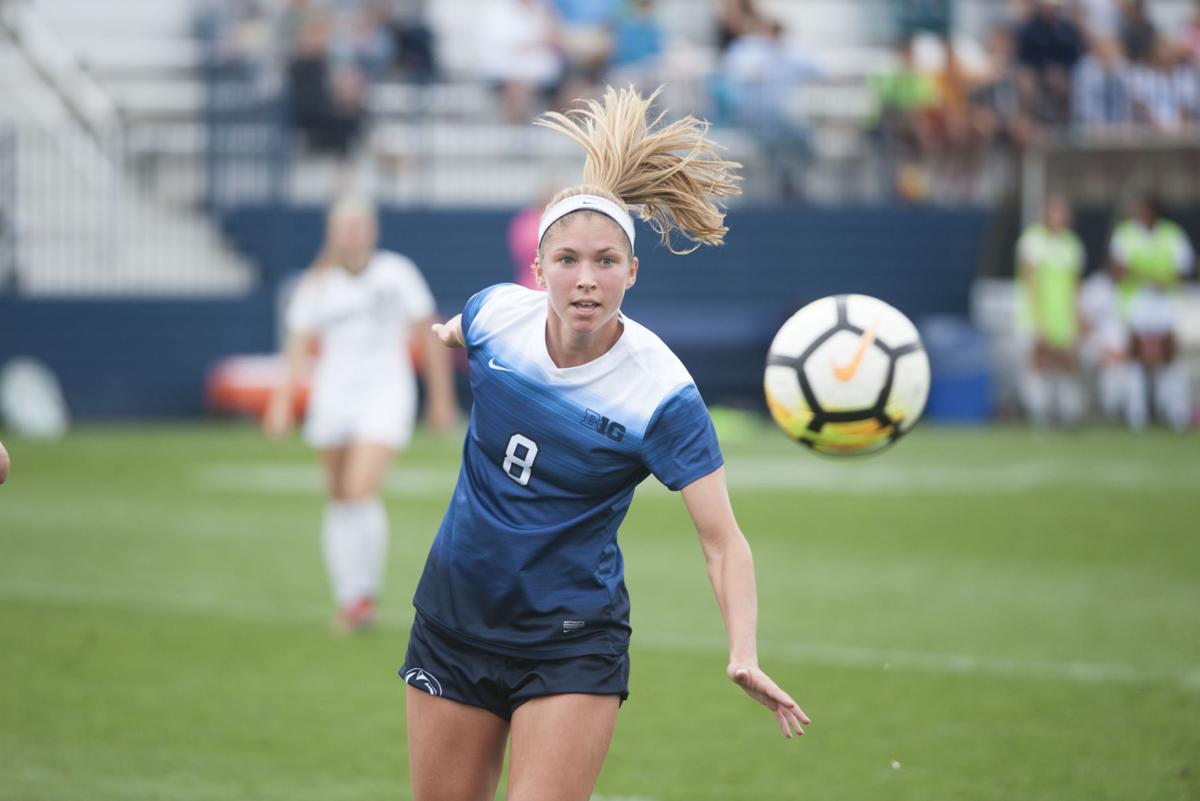 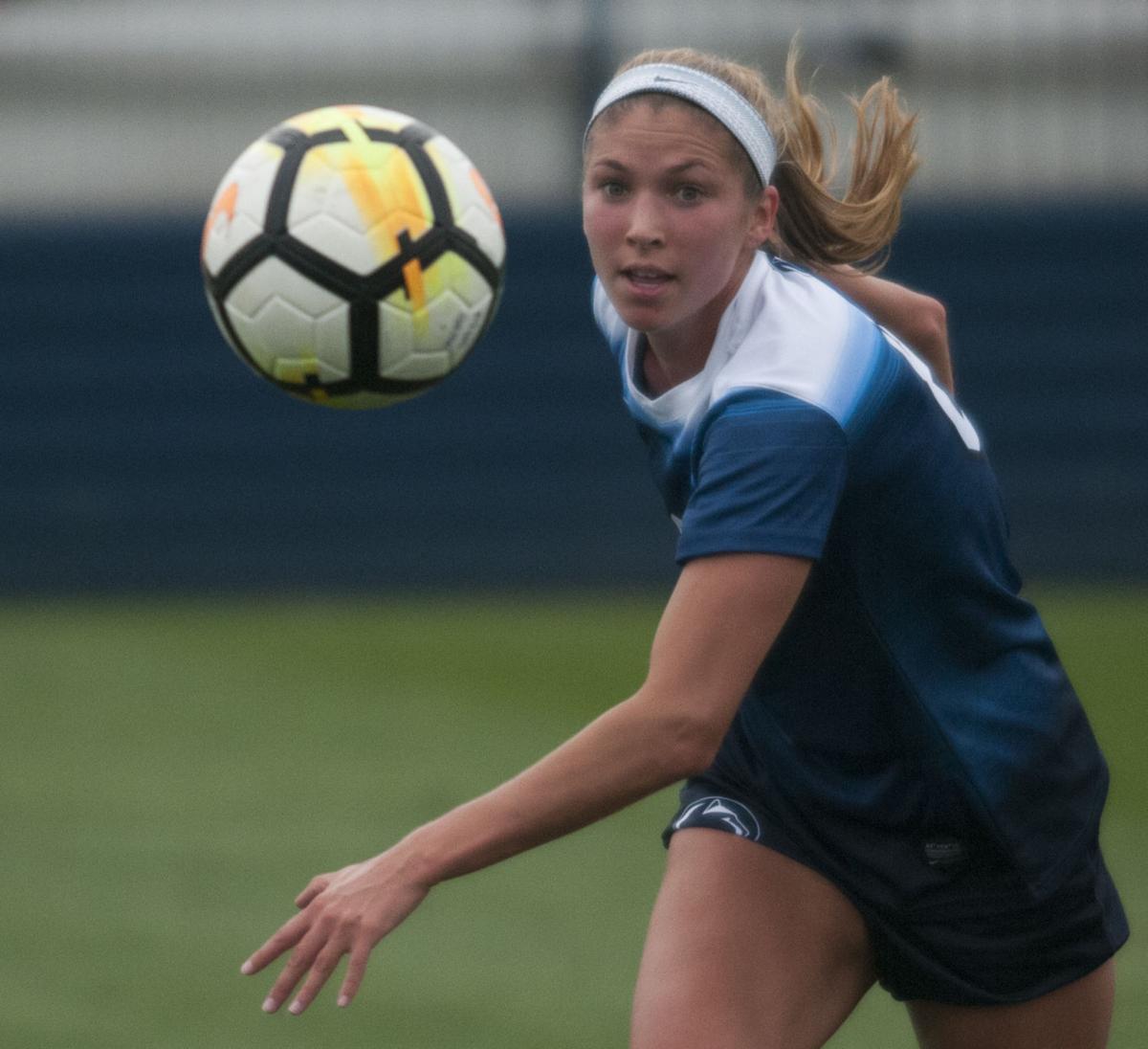 The 2021 campaign marks the sixth season graduate student Kristin Schnurr has donned the blue and white.

Her collegiate career, which is approaching seven years, has been fraught with constant challenges and obstacles. But, it also has provided great experiences and wisdom to Schnurr, or as her teammates affectionately call her,“Grandma.”

Although Schnurr’s lengthy playing career is a rarity among Division I athletes, the nickname “Grandma” has been a long standing tradition — a name every fifth year player on the squad is bequeathed.

“I feel like I really started to embrace that [grandma] role when I ended up coming back for a sixth year, because who does that kind of thing?” Schnurr said. “Everyone just started calling me Grandma, and I just embraced it.”

The striker started her career wearing the blue and white back in spring 2015 after graduating from high school early to join the Nittany Lions.

The Bristow, Virginia, native was a highly touted recruit and a state and national champion at the club level.

“My first impression of her was that she's a winner, that she's a competitor and she's a fighter,” coach Erica Dambach said. “I wouldn't say that any of those things has shifted. What I didn't realize was what she had down inside of her and her ability to fight through adversity.

“I can't think of another player throughout the course of their career that has encountered more adversity, has had to fight through and has come out the other side of it.”

For Schnurr, that “adversity” came in the form of a struggle with injuries. By the time she first arrived on campus, Schnurr had just received her first ACL surgery.

In the following summer before her freshman season, Schnurr had complications in her recovery that required several more surgical procedures to repair her knee.

The freshman was forced to utilize a redshirt year while still recovering but was able to rejoin the squad for the Final Four match of the 2015 NCAA Tournament, a tournament where the Nittany Lions managed to capture their first national title in program history.

Fittingly, this makes “Grandma” Schnurr the only player from the 2015 national championship squad to still be on the current roster in 2021.

But after 2015, things began to fall into place for the young striker.

Schnurr managed to accumulate eight goals and four assists in 45 appearances for Penn State, including a 2018 season where she led the team in scoring.

The then-redshirt junior was excelling on the field and managed to spend as much time as possible out of the recovery room.

Schnurr claimed there were small muscle strains here and there in those three years, but in terms of injuries, it appeared as though that was all behind her — until 2019.

“In our last spring game, we literally had scored in 30 seconds, and then the next minute or two after that, we were down at the box again,” Schnurr said. “I took a shot, came down, got kind of hit, not hit from behind, but hit in a way that I couldn't control my body and ended up tearing my other ACL.”

Schnurr was out for the entirety of her 2019 redshirt senior season, and the then-fifth year student would be granted another chance to end her Penn State days under more satisfactory terms during the following season.

Struggling with long-term injuries and the drawn out recovery periods for players whose singular passion is to play can be a devastating experience. In those moments, Schnurr said she believes she grew in wisdom and mental fortitude.

It was the days spent rehabbing when she was able to lean into her faith — something she has delved deeper into since coming to college — and the optimism in knowing she would recover.

One of the bigger realizations Schnurr had while recovering was what soccer truly means to her as a person.

“Soccer doesn't define me,” Schnurr said. “And through injury, at least for me, I found that soccer is not my identity, and that's the toughest thing for an athlete — to come to the realization that this sport doesn't define me.”

Schnurr said not only was she hardly defined by soccer, but all of the injuries and all of the “random things” brought out the resiliency to not be defined by the cruel nature of injury.

While going through that intense period of self growth, the striker was making a profound impact on the people around her.

Dambach said the graduate student has made an “indescribable” impact on the entire program but, more surprisingly, Schnurr has had a tremendous influence on Dambach herself.

“What I've appreciated so much about Kristin Schnurr is that we have open, honest conversations,” Dambach said. “She has taught me how to quiet down everything other than what's going on in your own head, and the positive self talk and your confidence can come completely from your own preparation.

“It doesn't matter what anybody else says, thinks or does. That you can give yourself your own confidence — that's a lesson I'll take on for the rest of my life.”

Schnurr’s relationship with Dambach started back in August 2012 when Schnurr went on her first official visit to Penn State. From there, the two have formed a relationship that now spans the better part of the last decade.

It was in those “honest conversations” with her coach where Schnurr said she grew as a person and a player, and she found an advocate in Dambach.

“[Schnurr] has battled injuries, she has battled for starting roles coming off the bench, and to me, she is the consummate team player,” Dambach said. “I've learned so much from her over her time here.”

Along with impacting her coach, Schnurr was able to pass on her wisdom to teammates.

Redshirt sophomore striker Ally Schlegel, the 2021 Big Ten Forward of the Year, called her teammate a role model and a teacher.

Schnurr and Schlegel play the same position but inhabit the striker role in different ways:

Schlegel specializes in playing with her back to the goal while Schnurr has always utilized her pace to stretch the field vertically.

When Schlegel first came to Penn State as a freshman, she said she struggled to stretch the opposition in the same way Schnurr does. The redshirt sophomore credits “Grandma” for teaching her how to push back the opponent’s defensive line.

Over summer 2020, Schnurr ended up not having somewhere to live off campus, so the graduate student lived in the dorms where usually only the incoming freshmen would live.

When Schnurr met all of the freshmen for the first time, the first-year players were unsure of what their senior-most teammate was going to be like. Little did they know, they were about to meet their new grandma.

“One of them told me that they thought I was going to be the most intimidating one on the team, just because I was the oldest, and I had completely crushed that,” Schnurr said. “She was like, ‘I didn't think you'd actually say hi to us. You're a senior, why would you care about a freshman?’

“So that was kind of funny to me, because then we were just like a little family living in the dorms. We did everything together — we'd go eat after training or fitness or whatever. We'd go to the lake together.”

Schnurr remembered what it was like entering her first year at Penn State. The graduate student recalled feeling overwhelmed yet excited by the prospect of coming to a new school not knowing anyone other than her roommate.

She said if she were to pass one thing on to the freshmen players this year, it would be to embrace one another and to not let anything get in the way of the “united family” mentality that drives the team.

“It's gonna be kind of fun to watch them grow over the next couple years when I'm not here,” Schnurr said with a laugh. “Just seeing how they end up as seniors — I kind of look forward to that, even though that means I'll be older.”

The graduate student is ending her time at Penn State after 2021, but this year did not have to be Schnurr’s final season with the blue and white.

The NCAA Division I Council granted athletes an extra year of eligibility to compete, meaning Schnurr could have extended her stay in Happy Valley through fall 2021 like her senior teammates Sam Coffey, Frankie Tagliaferri and Kerry Abello have already announced.

But with six and a half years at Penn State already under her belt, the graduate student striker said she felt after having already received her master’s degree, there was not much else left for her to accomplish in State College.

As the team competes in Cary, North Carolina, for the NCAA Tournament, the 2021 season is entering its final stages — and so does Schnurr’s time as a Penn State player.

“[I’m] really excited going forward with this team,” Schnurr said before the tournament started. “I think we've said it before, but this team is different. This team is special. Going through all we've been through is just, it's crazy to look back and just see where we are now.

“This team is a special one, and it's a championship team.”

After Penn State’s dream start to the NCAA Tournament against Alabama State, the Nittany Lions’ eyes will turn to No. 14 Vanderbilt in their u…

Luke Vargas is a women's soccer reporter for The Daily Collegian. He is a freshman studying digital and print journalism with a minor in Spanish.