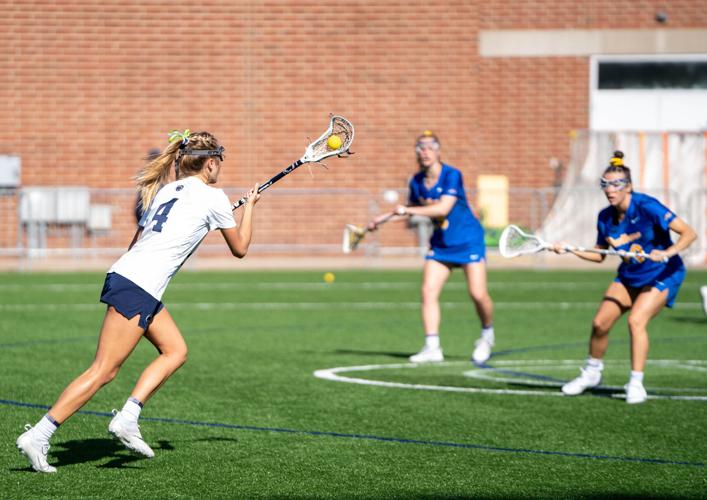 Penn State's Kayla Abernathy (4) carries the ball up the field during Penn State's game against Pitt at Panzer Stadium in University Park, Pa. on Tuesday, Apr. 12, 2022. The Nittany Lions defeated the Panthers 15-7. 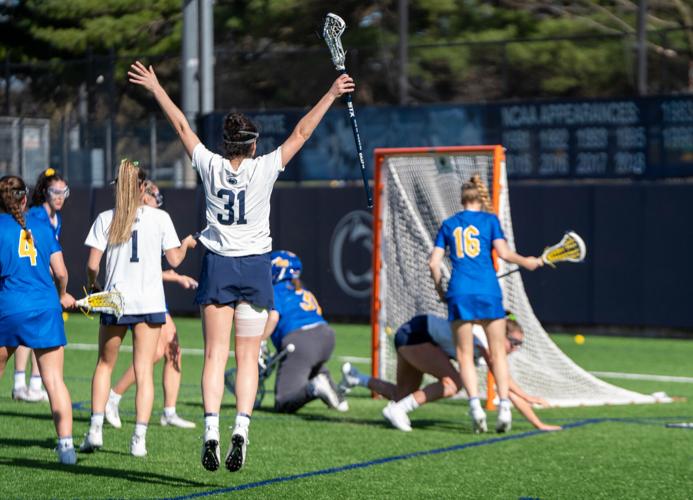 Penn State's Mary Muldoon (31) celebrates after a goal during Penn State's game against Pitt at Panzer Stadium in University Park, Pa. on Tuesday, Apr. 12, 2022. The Nittany Lions defeated the Panthers 15-7.

After Penn State fell to No. 25 Johns Hopkins in its regular-season finale Thursday, coach Missy Doherty finished winless in conference play for the first time in her collegiate coaching career.

After keeping pace with the Blue Jays through 30 minutes, the blue and white’s offense struggled to find its footing in the second half.

This second-half collapse drew some similarities to its performance against Rutgers on April 23.

Against the Scarlet Knights the Nittany Lions were within one goal, with a 10-9 score at half, but only managed four more tallies thereafter in an 18-13 defeat.

In the first half, freshman defender Ellie Hollin gathered one of our four tallies for the blue and white, her first career goal and point.

Hollin said she was happy with the goal and cited the celebration with her comrades as the highlight of the moment.

“It was awesome,” Hollin said. “Definitely the best part was celebrating with my teammates.”

Penn State’s five goals scored against the Blue Jays was a season low and the least amount of goals scored by the program in the last five seasons.

Despite this overwhelming lack of scoring, sophomore Kristin O’Neill, the team’s leading goalscorer, gathered a hat trick in the 10-5 loss.

Joined by O’Neill and Hollin in the goal column, junior Brooke Barger registered her first goal of the season and just the fifth of her career.

From a broader standpoint, Penn State’s lack of late-season offense contributed to what became a lost season for the Nittany Lions.

The Nittany Lions failed to make the Big Ten Tournament and will finish below .500 for a second straight season.

Moving forward, Hollin said she feels the team’s younger players will benefit from the experience they gained over the course of the 2022 season.

“This team is mostly freshmen and sophomores starting out there, especially on the defensive end,” Hollin said. “I feel like all we can do is grow from here.”

Penn State has shown it can win under Doherty in the past, with the head coach having taken the program to the NCAA Tournament final and won the Big Ten Tournament before.

With that coaching experience and a young, moldable squad, the blue and white could have an exciting future.

Hollin doubled down on her sentiments about inexperience playing a role in the team’s struggles, while similarly reaffirming her claim that they’ll figure things out.

“I know we have a lot of young players on the offensive end as well,” Hollin said. “I think we’re competing, and if we can just put a couple more balls in the back of the net, we’re [competing] with all these teams we played this year.”

Penn State’s most-recent loss to Johns Hopkins is likely the final time Doherty will face off against Blue Jays coach Janine Tucker, who announced this season will be her 29th and final year.

The two longtime coaches have faced off 16 times since Doherty started coaching in Happy Valley in 2011.

While the blue and white’s head coach holds a 10-6 advantage over that period, Tucker managed to win the last four matchups between the two.

As Penn State knows better than most right now, your most recent game is the most important, especially at the tail end of a season.

Hollin and company remained positive, though, not wishing to be with anyone else but with her fellow Penn Staters despite coming up short against Johns Hopkins and on the season.

“I couldn’t ask for a better team to finish this year with,” Hollin said.

Penn State faced off against No. 25 Johns Hopkins on Thursday night looking to find its firs…