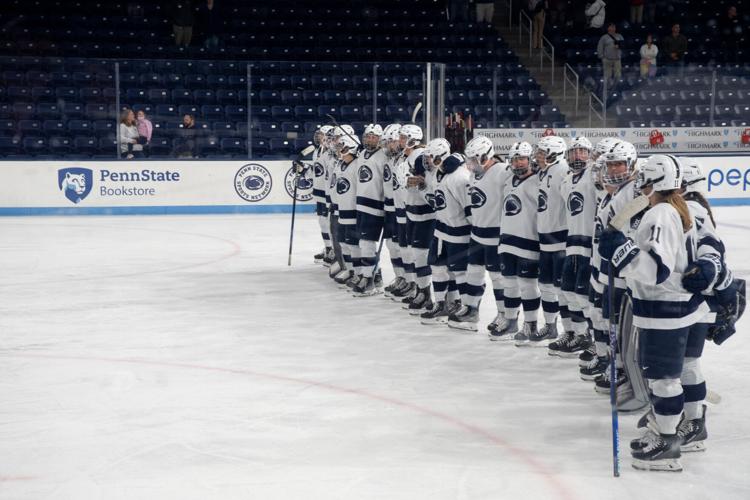 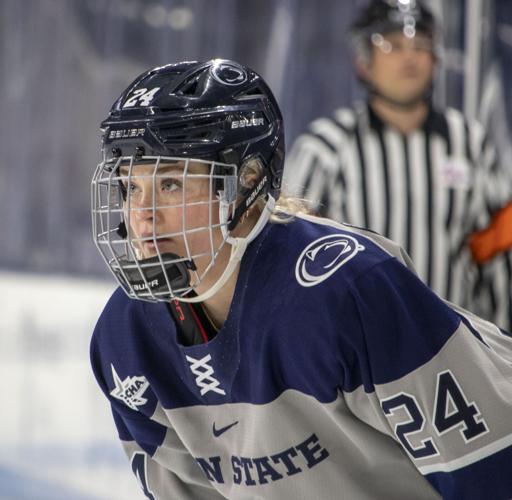 Defender Lyndie Lobdell (24) watches as the puck is dropped back into the game during the Penn State women's ice hockey game vs. Syracuse on Friday, Feb. 4, 2021 at the Pegula Ice Arena in University Park, Pa. The game finished in 1-1 tie in overtime with Penn State's goal from forward Alyssa Machado (3).

Penn State’s preseason CHA Rookie of the Year is living up to expectations early in Hockey Valley.

Despite a slow offensive start in the season opener, the Nittany Lions finished the first night of the campaign with a 4-1 win against Wisconsin, fueled by the play of freshman forward Tessa Janecke.

Janecke proved to be the spark of offense the squad needed in a competitive first game to the season. Her first score with the Nittany Lions started a streak of four straight unanswered goals from the Nittany Lions, after a shorthanded tally from Wisconsin kicked things off.

Janecke managed to score twice, once in the second period and once again in the final frame to push the squad’s lead to 3-1. Forwards senior Courtney Correia and freshman Katelyn Roberts assisted her first goal of the night, while the second Janecke tallied unassisted.

The young Nittany Lion stepped up big in a performance that’ll likely be remembered for the rest of the season by fans and the team alike.

“I’ve coached a lot of years and this is one of my most special wins,” coach Jeff Kampersal said.

The Nittany Lions were held scoreless until the freshman’s aggressive offensive play got them on the board around the halfway point of the second period.

After coming in ranked third in the nation according to USCHO.com, the Badgers had a hard time outscoring Penn State.

The Nittany Lions’ defense was solid, but the surprise headline of the night was the freshman’s all-around debut for the blue and white.

The physical play by Janecke also translated to her squad getting the puck more often, as she led the team in faceoff wins with seven.

Janecke’s physicality is evident just watching her play, and that willingness to do what it takes to contribute doesn’t just show up on the offensive end.

While she finished the night with two goals and an assist, the standout metric from her performance was the game-high five blocked shots in the contest. The Orangeville, Illinois, native even walked away with a couple bruises, according to her head coach.

“It’s great when one of your better players can be the heart and soul [of your team], it’s awesome,” Kampersal said. “Everybody gets pumped up, everyone’s celebrating one another, and then it gives the next person the excitement to do the same.”

However, it wasn’t all positive for Janecke, missing three of her shots on the night, including a couple in the first period. She also drew a duo of penalties in the second period and struggled at the dot as time went on.

Ultimately though, Janecke displayed great patience in her first meaningful game with the Nittany Lions.

“It’s all right to make mistakes,” Janecke said. “We’re just going to keep firing [shots] and try to create plays from below the goal line.”

Janecke’s mentality certainly contributed to the rest of the team even this early.

With playmaking looking like one of the Nittany Lions’ strengths this season, the offense should only get better and more comfortable playing together.

After earning the team’s first win against Wisconsin in school history, the Nittany Lions will look to continue their solid play in Friday night’s rematch at home.

“I knew that the chemistry off of the ice would translate to chemistry on the ice,” Janecke said. “But I’m just so happy to see it so early.”

Penn State was ranked 14th in the preseason USCHO poll, and it had a chance to prove that it…

Penn State’s performance against Central Michigan had its highs and its lows, and the same could be said about its special teams performance.