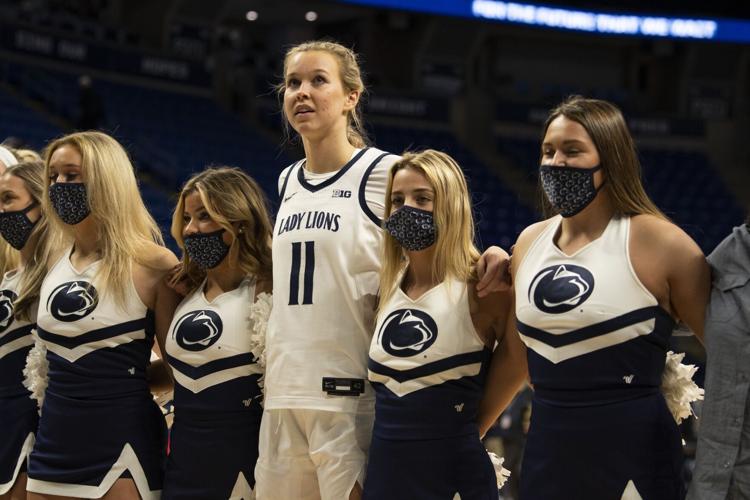 Anna Camden links arms with the Lionettes to sing the Penn State's Alma Mater after the Lady Lions' win against the Hornets. 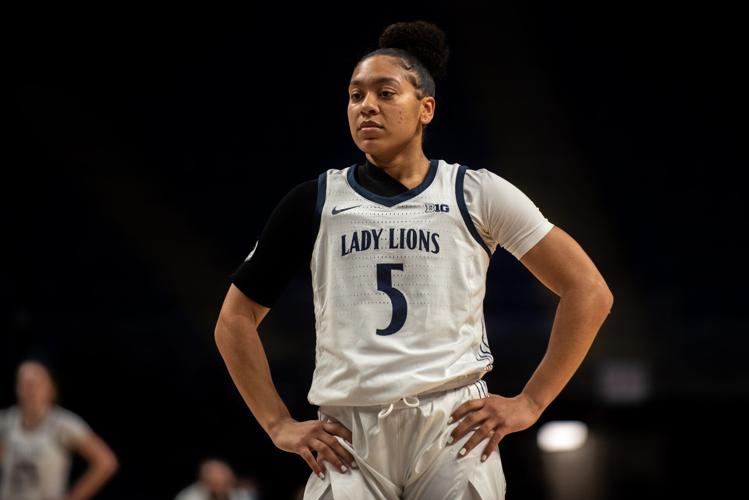 Guard Leilani Kapinus (5) awaits the ball to shoot a free-throw during the Penn State women's basketball game against Maryland on Sunday, Jan. 30, 2022 at the Bryce Jordan Center in University Park, Pa. The Nittany Lions lost 82-71.

Penn State’s 2022-23 season is going to look a lot different than last season in terms of its starting lineup and key players.

Both junior guard Shay Hagans and sophomore guard Tova Sabel have entered the transfer portal and will most likely leave the Lady Lions’ roster.

It’s also important for other blue and white players to step up because Kelly Jekot and Niya Beverley graduated from Penn State following the conclusion of the 2021-22 campaign.

It’s a no-brainer junior guard Makenna Marisa will be a key starting player next season as she has led the blue and white for the entire duration of the past season.

Completely taking over on the offensive end, Marisa totaled 645 points, 123 assists, 59 3-pointers and made 138 of 165 free throws for Penn State last season, the most in all categories.

However, as Marisa heads into her senior year, other players on coach Carolyn Kieger’s squad will need to step up for the team to improve on both ends of the court.

One player who looks to play another key role in the Bryce Jordan Center next season is redshirt freshman guard Leilani Kapinus.

Not only is Kapinus a key player defensively, but she also stands out on the offense.

Kapinus was the second-leading scorer for Penn State last season with 278 points and took the No. 1 spot in total rebounds, 45 of them offensive rebounds.

Something Kapinus will need to work on next season is her 3-point shooting; she made just 13 3-pointers on 56 attempts last season.

Not only does she need to work on her shooting from range, she also needs to focus on her physicality during games.

Kapinus totaled the most personal fouls on the team, accumulating 85 last season.

Because Hagans was named the defensive captain for the 2021-22 season and is likely transferring, it looks like Kapinus could be in the running for that position next season.

Sophomore forward Ali Brigham will likely continue to help out the Lady Lions on offense next season, as she scored 234 points last season.

Although Brigham only attempted one 3-pointer throughout the entire season, she’s great at blocking and forcing turnovers from under the basket, with the majority of her points coming from layups.

Brigham is a key player for Kieger as she totaled 30 blocks and 60 turnovers last season, and the rising junior will likely be relied on.

If junior forward Anna Camden can work hard and get stronger during this offseason, then there’s a chance that she could start more games next season.

Camden put up 176 points last season and totaled the fifth most turnovers on the team. Her most important contribution to the starting five was her work on the glass. She totaled 143 rebounds, 112 defensive and 31 offensive, this past season.

Camden is an overall talent on the court; however, she needs to work on her ball control to minimize turnovers in the 2022-23 season.

It will be hard to determine who a fifth possible starter for next season could be, considering four Lady Lions are slated to leave the roster.

Thomas showed promise across select moments in the 2021-22 campaign, but Burke featured the most for the blue and white and likely will have the edge to round out the team.

It’s been a tale of two seasons for Michigan and Penn State in 2022.

There are always a fair amount of question marks when a team starts fall camp; Penn State is no different in 2022. Chiefly among them, according to James Franklin on Saturday, are the special teams units, the offensive line and the linebacker room.