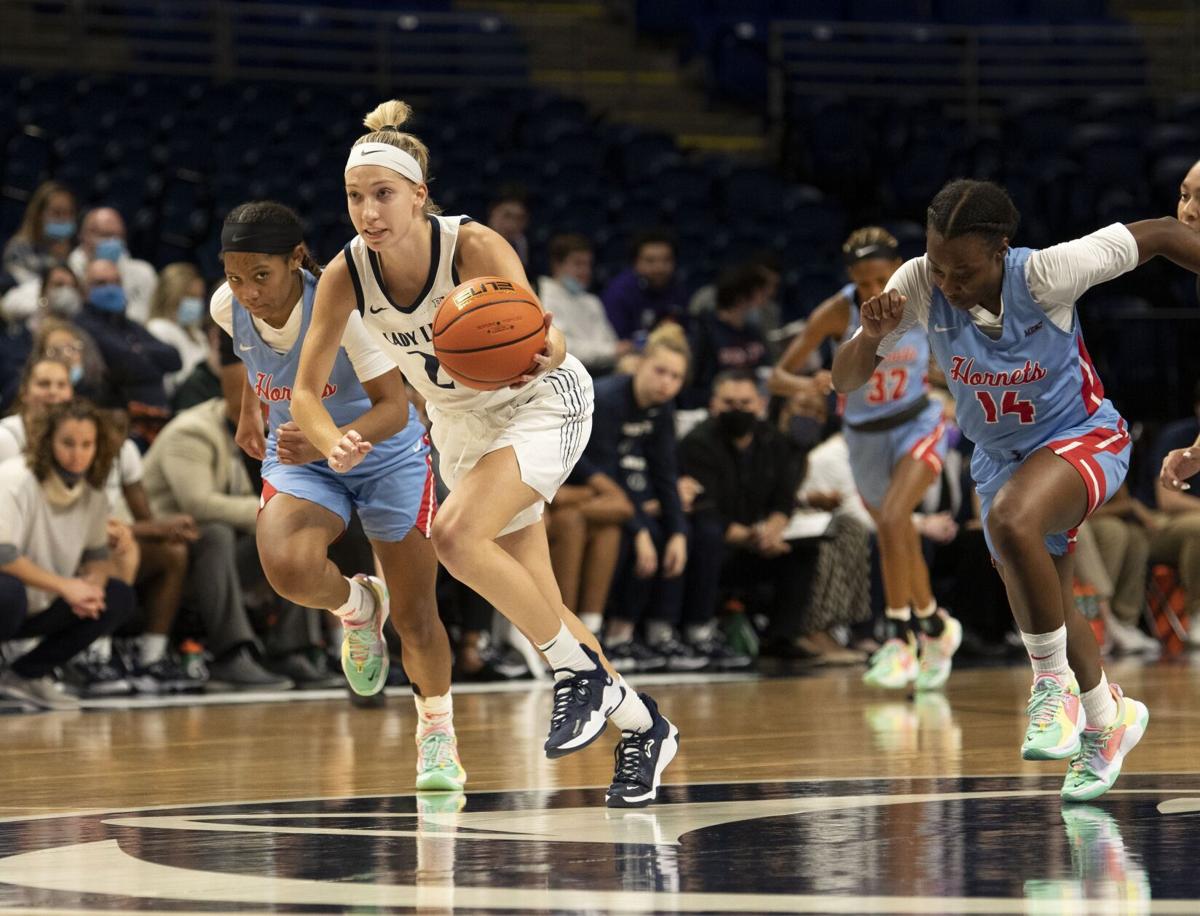 Guard Makenna Marisa (20) sprints down the court during Penn State women’s basketball against Delaware State University at the Bryce Jordan Center on Tuesday, Nov. 16, 2021. The Lady Lions beat the Hornets 120-51. 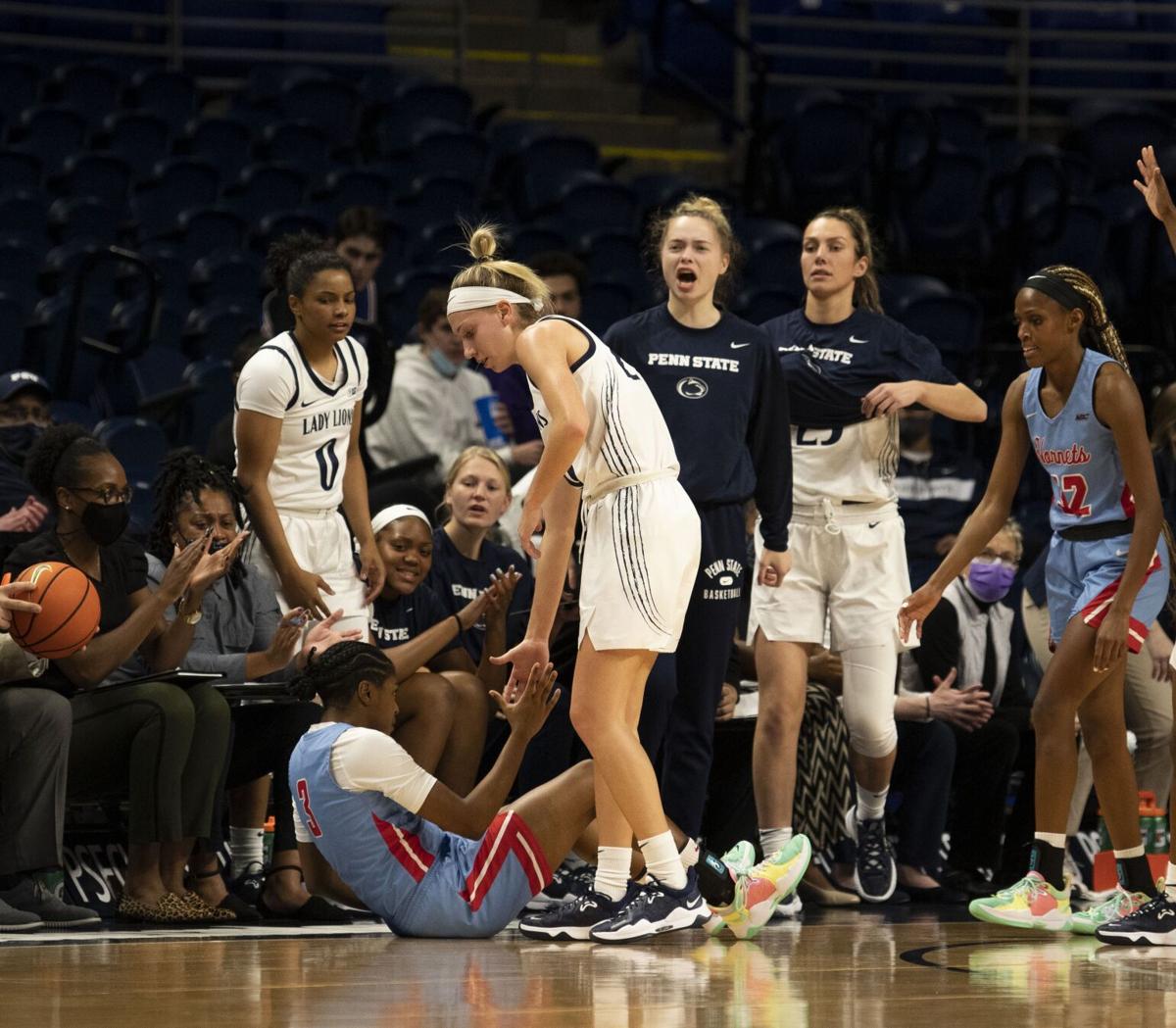 Penn State was creating chaos all over the defensive end of the court in its blowout win over Delaware State.

Blowout might be a bit of an understatement, as the final score was 120-51, and the Lady Lions once led by 71 points.

Penn State’s 120 points were the most in program history according to coach Carolyn Kieger.

The blue and white were led to victory by junior guard Makenna Marisa, who notched a triple-double with 30 points, 11 assists and 10 steals.

Despite Marisa’s standout performance, it was a dominant team effort that propelled the Lady Lions to victory.

The team tallied 20 offensive rebounds, 37 assists and 25 steals, while forcing 37 turnovers. Those 37 assists were also a program record.

Rather than laud her team’s work on the ball, Kieger applauded the blue and white’s defensive performance after the win.

“I thought our team did a great job in terms of paying attention to scouting and really locking in on our defensive intensity,” Kieger said. “We held another opponent under 39% from the field, which is a huge goal for ours.”

The defensive intensity was certainly constant throughout the game, as indicated by the 37 turnovers the Lady Lions forced.

When discussing what allowed the team to keep the defensive intensity so high throughout the game, Kieger credited her guards who were constantly active at the top of the zone defense.

“I think the team kind of fed off that tonight,” Kieger said. “Obviously when you see your guards getting after the ball, that makes everybody set the tone, gets everybody behind them and excited to get after that next play on defense.”

The Lady Lions racked up 58 points off of the turnovers its defensive efforts forced. The team would go on to score 46 fast break points, making it look like Penn State was participating in pregame layup lines throughout the game.

Marisa credited her team for allowing her to score so many points in transition.

“There were a lot of tips and deflections overall that we had,” Marisa said, “and I kind of just did the easy part and ran ahead and scored.”

Kieger talked about what motivated her team to continue swiping the ball and scoring in transition despite putting Delaware State under an unmatchable deficit.

“We have a rule, whenever we get a steal and we go score transition that we pick right back up in our press,” Kieger said. “So, if they want to keep pressing, they have to get steals to stay in it.”

Delaware State was shorthanded on the night, only carrying six total players, meaning it had just one substitute.

The Hornets visibly slowed down as the game went on, and senior guard Niya Beverley said her team could feel it.

“When we felt that we pressed up even more, we have something called no mercy, and we talk about that a lot,” Beverley said. “I think we really showed that at the end of the day.”

Kieger said getting out on the fastbreak and playing with pace is always the strategy for her team, no matter how many players are on the other side.

“It's always the game plan, but we tried to keep our foot on the gas tonight,” Kieger said. “We keep saying as a team that we're going to play hard two to three minute stretches at a time, and then your teammates are going to come in and have your back.”

Kieger continued to praise her team’s depth and all-out mentality when her players were on the floor.

With the chance to go 3-0 to start the season, Penn State proved to be more than successful …

Many program records were broken in Penn State’s victory against Delaware State where the Lady Lions won by a 69-point deficit.