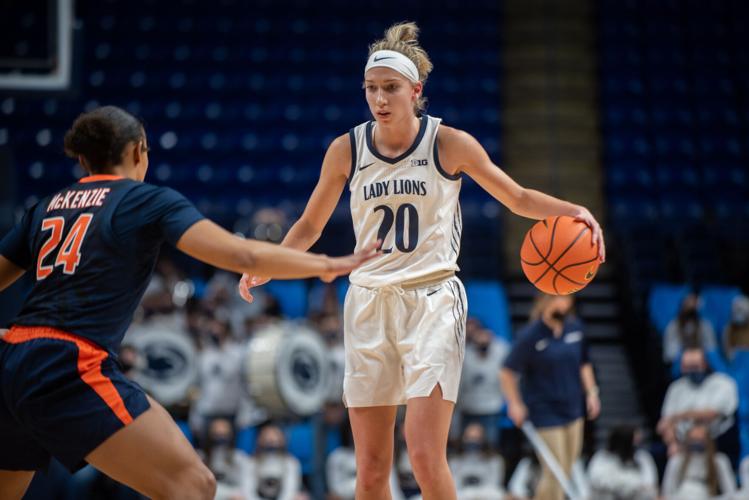 Penn State guard Makenna Marisa (20) eyes down an Illinois defender in their game on Jan. 16, 2022 at the Bryce Jordan Center in State College, PA. Penn State won the game 90-72. 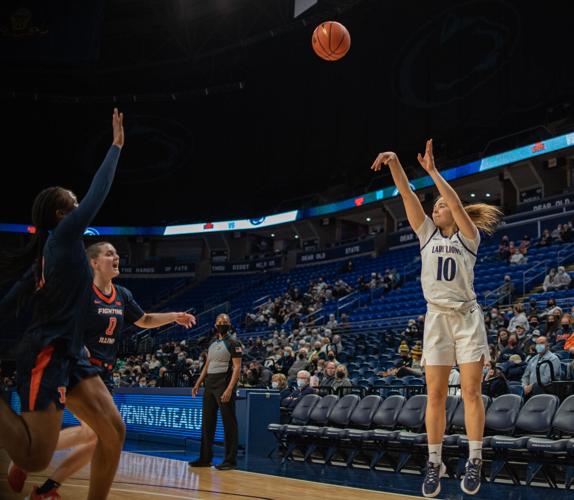 Penn State guard Tova Sabel (10) makes a three-pointer during their game against the Illinois Fighting Illini on Jan. 16, 2022, at the Bryce Jordan Center in State College, PA.

Penn State picked up its second consecutive win in the clutch Thursday night in a tough road matchup with Northwestern.

The win marks the blue and white’s third victory in Big Ten play so far this season and its second win on the road — two of the areas where the team has struggled most.

The first half was a close, back-and-forth contest as the teams traded the lead early on before Northwestern gained a slight advantage towards the end of the first quarter.

The Lady Lions would battle back, however, as they retook the lead a few minutes before the half.

The two teams entered the locker room tied at halftime by a score of 28-28.

Both squads struggled shooting from the field in the first half as Penn State shot 33.3% and Northwestern shot 35.3%.

The Lady Lions opened the second half on a cold streak, not scoring a single point for the first four and a half minutes of the third quarter.

The blue and white’s defense remained strong throughout that stretch, however, keeping Penn State in the game.

The constant lead changes continued throughout the second half, as the teams battled and traded baskets. Penn State took a 42-41 lead into the fourth quarter.

After numerous turnovers, a Penn State layup from junior guard Shay Hagans gave her team the lead before Northwestern converted an and-one to get back on top with about five minutes remaining.

With only a minute remaining Leilani Kapinus managed to score a layup and take a key foul to go to the line where she managed to put her team up by three.

A mistake by the Lady Lions nearly sent the game into overtime as they fouled Northwestern’s senior guard Veronica Burton on a 3-point shot.

However, Burton only made one of her three free throws, holding the match a 59-57 in favor of the blue and white.

With four clutch free throws from Makenna Marisa in the dying embers of the clash, Penn State held on for the win 63-59.

Battle of the defenses

This game had the possibility of being a low scoring matchup from the minute it was put on the calendar.

Both Penn State and Northwestern are teams that possess great team and individual defense.

The Wildcats have reigning Big Ten Defensive Player of the Year in Burton, who leads the Big Ten in steals per game with 4.3.

Meanwhile, the Lady Lions possess a tricky zone defense that can, at times, cause problems for even the best of teams.

It wasn't much of a surprise for the contest to turn into a low scoring, defensive game.

Both teams struggled shooting from the field throughout the contest, as Penn State finished with 36.7% field-goal percentage, while Northwestern shot 35.4%.

Penn State has struggled mightily on the road this season.

Entering Thursday’s game, the Lady Lions were 1-4 on the road, with a point differential of -70 in those matchups.

A big part of that daunting point differential was the team's lack of defensive consistency on the road.

In their opponent’s arenas, the Lady Lions surrender an average of 77.8 points per game this season.

At home, the opposite is true. The blue and white has held opponents to just 62.6 points per game.

Penn State’s first road conference victory can be seen as a sign of the team's improvement so far.

Down to the wire

From the very first whistle, the game had the looks of a long, hard fought battle.

That's exactly what players and fans were in for. Entering the fourth quarter, the win was completely up for grabs.

It was clear that the pressure was on as both teams locked in defensively and forced multiple turnovers.

In the end, it was a team effort that got it done for the blue and white as the squad received contributions from multiple players leading to the close win.

After defeating Illinois 90-72 and Northwestern 63-59, Penn State looked to extend its winning streak to three games on the bounce Sunday.