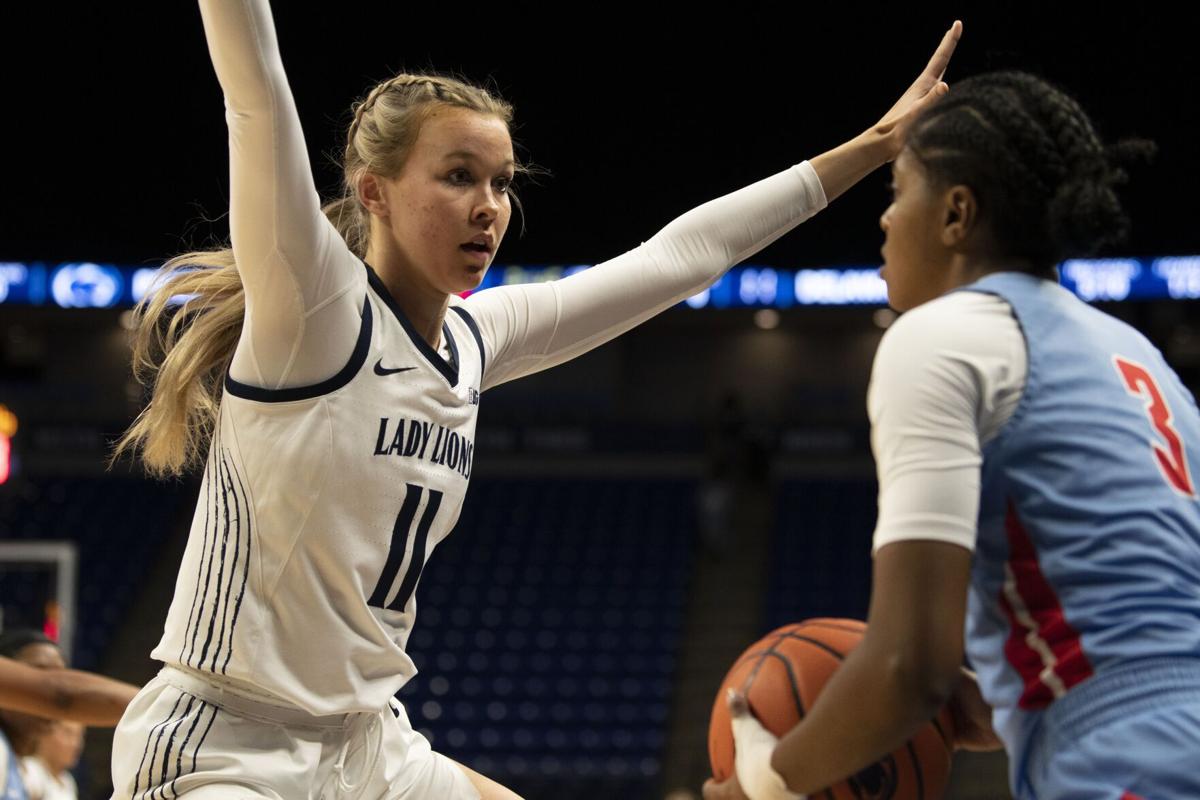 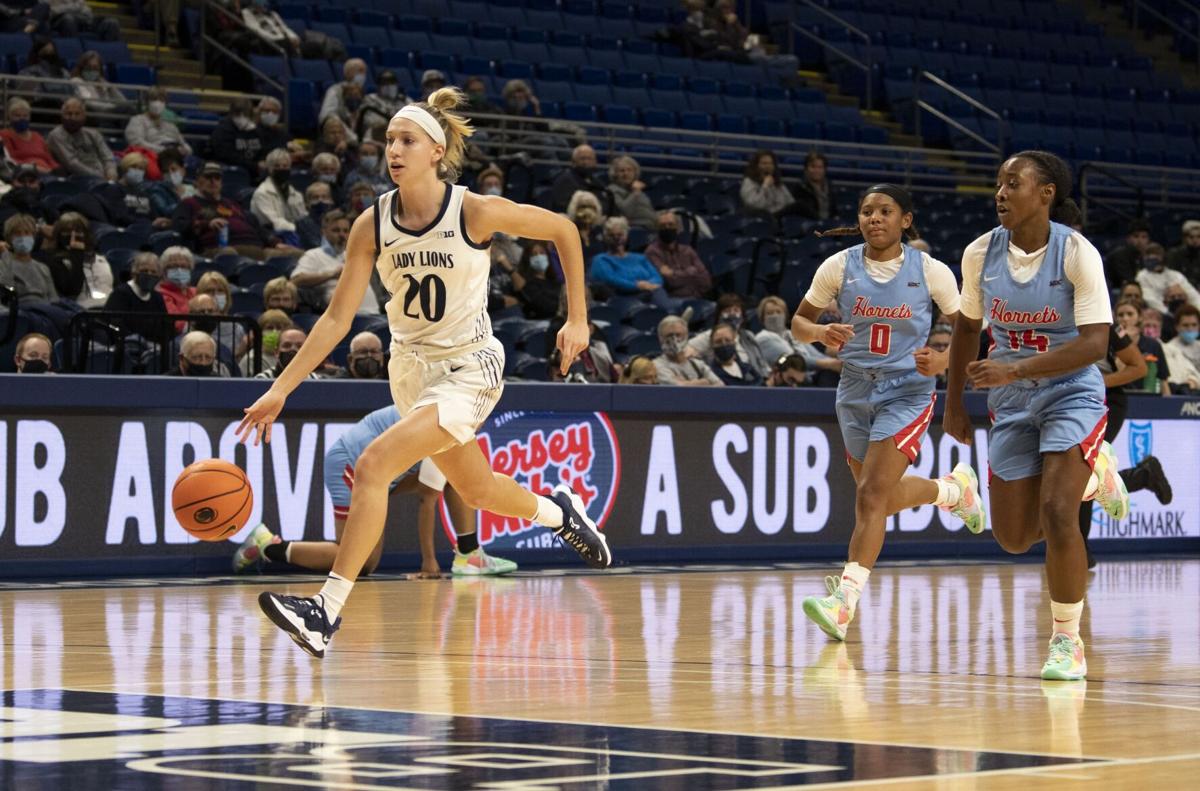 Guard Makenna Marisa (20) dribbles down the court during Penn State women’s basketball against Delaware State University at the Bryce Jordan Center on Tuesday, Nov. 16, 2021. The Lady Lions beat the Hornets 120-51.

Many program records were broken in Penn State’s victory against Delaware State where the Lady Lions won by a 69-point deficit.

The Lady Lions were able to defeat Delaware State effortlessly with a score of 120-51 which was the program’s highest point total in its history.

Penn State also notched a record breaking 50 field goals and 37 assists. The Bryce Jordan Center’s new record for steals was also made tonight by the Lady Lions against Delaware State with 25.

A record night for Penn State was driven by record-breaking performances from individuals in the blue and white on Tuesday.

Junior guard Makenna Marisa had a triple-double which is the first time a player has recorded the feat since Penn State joined the Big Ten.

“If you would have told me I had triple-doubles with steals I’d be like ‘you’re crazy,’” Marisa said.

Marisa scored 30 points, snatched 10 steals and made 11 assists for the Lady Lions. She has been a key contributor for this squad, and it showed during this match.

“I knew [Marisa] would get a triple-double soon,” coach Carolyn Kieger said. “I just didn’t know it was going to be steals, so she shocked me on that one.”

Despite having a career night donning the blue and white, her coach still saw areas where Marisa could improve her record-setting performance.

“My comment to her after the game was she should have rebounded more, but a phenomenal performance, obviously, by her and the rest of the team,” Kieger said.

Despite leading the score board since the start of the game, the blue and white kept their foot on the gas and gave it their all.

“It doesn’t matter, the score is always 0-0,” Kieger said. “We’ve been talking about having that lion mentality as we attack.”

Winning tonight's game and hitting those records for Marisa was extra special to do with her teammates, the junior guard said.

Marisa explained how her main goal is doing whatever it will take to get an open shot during a game.

She looks and creates opportunities to make plays happen during games and as soon as she sees an opening, she is going for it.

Marisa said she was not thinking about her record during the match because she was thinking of the team first.

“It's always been State before individual,” Marisa said.

The Legion of Blue was at the Bryce Jordan Center creating energy in the stands during the match and made the blue and white more excited.

Building off of Penn State’s last victories kept the team's energy up. Another thing that kept the Lady Lions energized throughout the match was watching each other make shots.

“Whenever we see each other’s good steals it just increases the energy more and keeps the momentum going,” Marisa said.

Throughout the match, the blue and white would keep up its energy and work together as a unit to beat Delaware State.

Kieger spoke about how selfless her squad is and how much they “vibe” together. She added how all the players share the ball.

Throughout this match, the team was constantly celebrating as they racked up more points.

“I think our team was really showing a lot of chemistry tonight, and everybody was celebrating each other’s success which was fun to see,” Kieger said.

Something the Lady Lions need to improve on moving forward into the season is keeping one another accountable on the court.

“We have some battles up here where we’re going to have to hold each other accountable and keep that chemistry alive at the same time,” Kieger said.

Penn State suffered its first loss of the season on Sunday as the Nittany Lions fell to Clemson on the road.