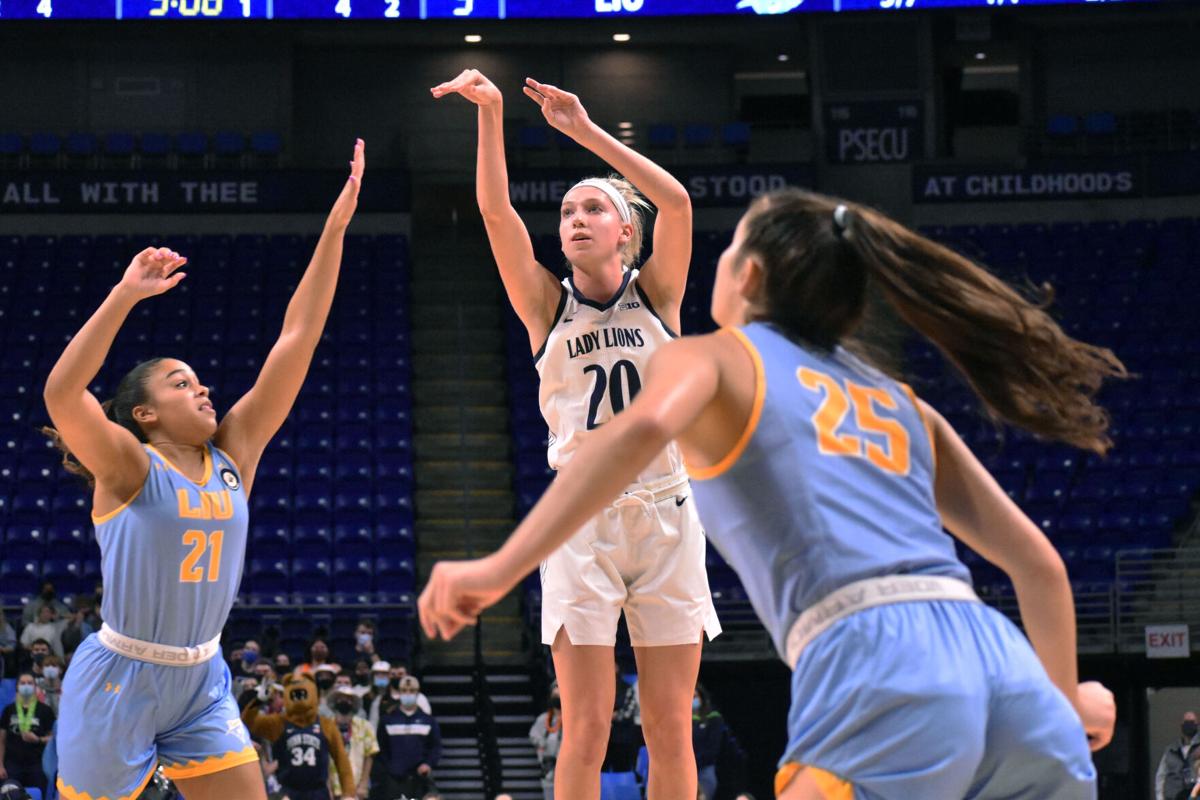 Gaurd Makenna Marisa (20) shoots the ball and scores a three-pointer for Penn State women's basketball against Long Island University at the Bryce Jordan Center on Tuesday, Nov. 9, 2021. The Lady Lions beat the sharks 85-66. 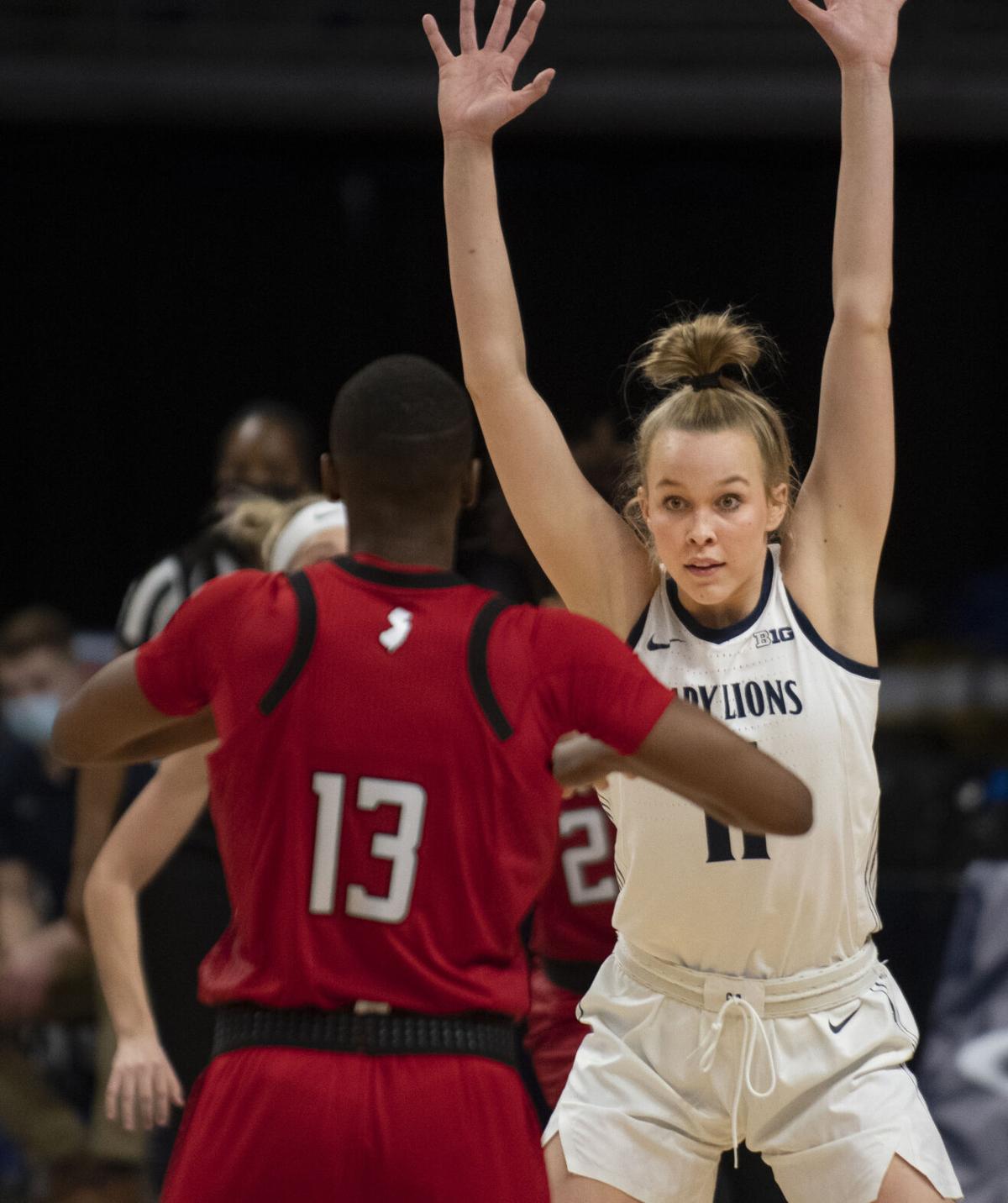 Penn State started its season off strong with two wins against LIU and Rider, and the blue and white is looking ahead to continue its streak into this week with another home contest and first road test.

The blue and white is off to a very successful start with its two-game winning streak.

The Lady Lions started their season off right with a win in their season-opening game against LIU, topping the Sharks 85-66.

Then continuing that success into its second contest of the campaign, Penn State won again against Rider by a score of 83-69.

After the blue and white face its next two matchups this week, it will head into the Gulf Coast Showcase.

After the Gulf Coast Showcase, Penn State will enter Big Ten play, where the competition is going to be a lot harder.

The Lady Lions next contest of the season will be on Tuesday where they will be facing Delaware State at the Bryce Jordan Center before they head out to Clemson to play on Sunday.

Here is how Penn State’s second week of competition will look.

The blue and white will host Delaware State on Tuesday, a team who currently has a two-game losing streak.

Delaware State lost its first two matches of the season against Stony Brook and Hampton, both by double figures, with the Seawolves managing to defeat the Hornets by 41 last week.

The Lady Lions have never faced the Dover-based university in program history, so coach Carolyn Kieger and the blue and white will clash with a new opponent on Tuesday.

The past two games, the Lady Lions have been scoring 84 points per game and should face little resistance from a team that hasn’t managed to score more than 46 in 2021.

Clemson currently has one win and one loss for its season, though, before hosting the Lady Lions, the Tigers have a game on Wednesday where they will be facing South Carolina on the road.

Clemson won its seasoning-opening game against USC Upstate 64-47, but then lost its second game of the season against Columbia 82-78.

Although Penn State has not played Delaware State, it has faced Clemson four times in its history as a program.

In its latest meeting, the blue and white came out with a victory in the 2019-20 season, defeating Clemson 68-55 at the Bryce Jordan Center.

The Lady Lions won that match, but it was a hard-fought competition, and Clemson totaled nine steals compared to Penn State’s 10.

By the end of the night, Penn State had 17 turnovers and 41 rebounds, while Clemson tallied 19 turnovers and hauled in 43 rebounds.

During the 2019 game, junior forward Anna Camden stood out and scored 11 points as a freshman and made all three of her attempts from behind the 3-point line.

Camden also grabbed one defensive rebound, snagged one steal and went 4-for-6 from the field during the affair.

This season Camden has been solid on the glass, picking up 12 rebounds, four steals and 14 points in the Lady Lions’ first two games.

Another key player during this 2019 match against Clemson was now-junior guard Makenna Marisa.

She has been a star player for the Lady Lions this season and has already scored 39 points and dished out eight assists.

During Marisa’s sophomore season last year she was named an all-Big Ten honorable mention and ranked fifth in the Big Ten in assists per game, finishing 37th in the nation.

There is no doubt that both Marisa and Camden will be major factors during Sunday’s game against Clemson.

In what could be a preview for what’s to come, Penn State resorted to a balanced scoring att…

With the chance to go 3-0 to start the season, Penn State proved to be more than successful with a win against Delaware State at the Bryce Jor…