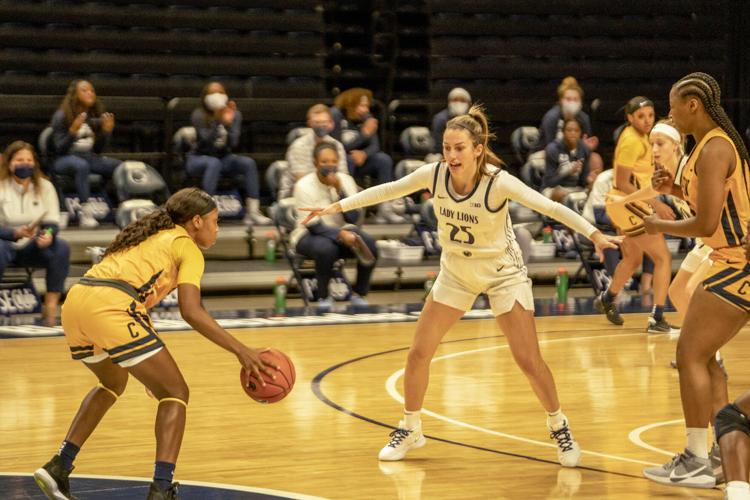 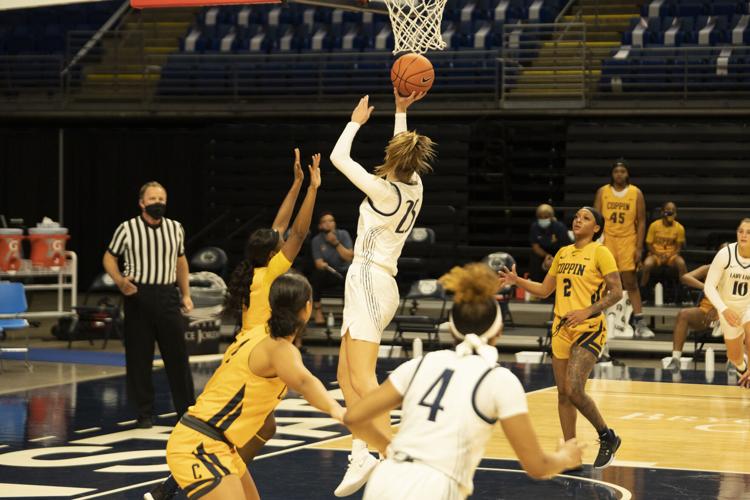 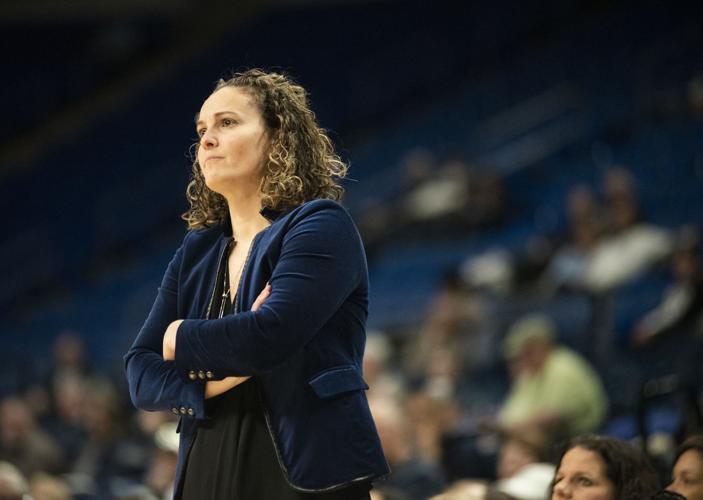 Lady Lions Head Coach Carolyn Kieger looks toward the play during the women’s basketball game against Indiana at the Bryce Jordan Center on Jan. 23, 2020. The No. 17/24 Hoosiers defeated the Lady Lions, 76-60.

After sitting out due to injury last year, Villanova transfer Kelly Jekot's not wasting any time leaving her mark on Penn State's program.

She came to Penn State after a successful three years with the Wildcasts where she averaged about 10 points per game and has continued to be an offensive spark for the Lady Lions.

Jekot turned in her second double-double of the season in as many games Monday, scoring 24 points and pulling down 10 rebounds in Penn State’s second win of the season.

She feels comfortable in a leadership role on and off the floor because of her collegiate experience and being able to observe a full Big Ten season starting last January when she joined the team.

“I had three pretty successful years at my previous school,” Jekot said. “I was actually able to sit the bench for the entire Big Ten conference schedule last year, which I think was very beneficial in terms of learning Coach [Carolyn] Kieger’s system and learning the players that were returners. I think they look to me because I came from a winning program and that’s not something they were used to.”

The graduate transfer scored nearly half of Penn State’s first quarter points during Monday’s contest, and had 13 of the Lady Lions’ 36 points in the opening 20 minutes.

Shooting 69.2% from the field and 66.7% from 3-point range, the Enola, Pennsylvania, native proved she can score in multiple ways, making her a tough task defensively for the opposition.

“She’s done a phenomenal job, not only from her production, but her leadership in the locker room,” Kieger said. “She’s got an incredible IQ and she shares it very well. She doesn’t hold it in and she makes others around her better, so from start to finish since she’s got here at Penn State, she’s done wonders for our culture and our team.”

Jekot proved she can lock down on defense as well.

Before the Lady Lions could pull away early in the first half, the Red Flash’s Karson Swogger shot a perfect 3-3 from three-point range.

Kieger elected to have the 6 foot guard defend Swogger, which resulted in Swogger only scoring three points in the second half.

“Defense is something we work on everyday in practice — more than offense,” Jekot said. “Defense wins championships and that’s what Coach Kieger’s program is all about.”

Jekot is the only player on Kieger’s squad with NCAA tournament experience as the Wildcats made the tournament in 2018 during her sophomore year.

In addition to being the only player with NCAA Tournament experience, Jekot is also only one of a handful of upperclassmen on an otherwise youth-led team.

So while her leadership and experience are important, so too is her talent.

“She’s someone who can really stretch the floor. Being able to be versatile and guard multiple positions and be able to read the way she does is really going to help us," Kieger said of Jekot after the team's opening day win. "The biggest thing she’s brought is just that authentic leadership.”

She hopes the winning experience she possesses from her collegiate past helps the Lady Lions go deeper into conference and national playoffs.

Jekot too, is keenly aware of how the additional years she has under her belt have paid dividends for her in her short Lady Lion career.

“We’re a young team and the leadership aspect is very important. That’s something we focus on every single day.”

Ultimately, Kieger is hoping having a leader of Jekot's caliber will help propel the Lady Lions to the next level.

“Experience does wonders,” Kieger said. “Having her come in here and help lead this young group has been a blessing. She’s taken the role to heart and done a phenomenal job.”

The Penn State women’s basketball team cruised to its second win of the season, besting in-s…

Despite the football team's struggles, Penn State sports fans still have a lot to look forward to in the coming months.

Alexis is a football reporter for The Daily Collegian. She is a senior majoring in broadcast journalism with minors in business and sports studies.