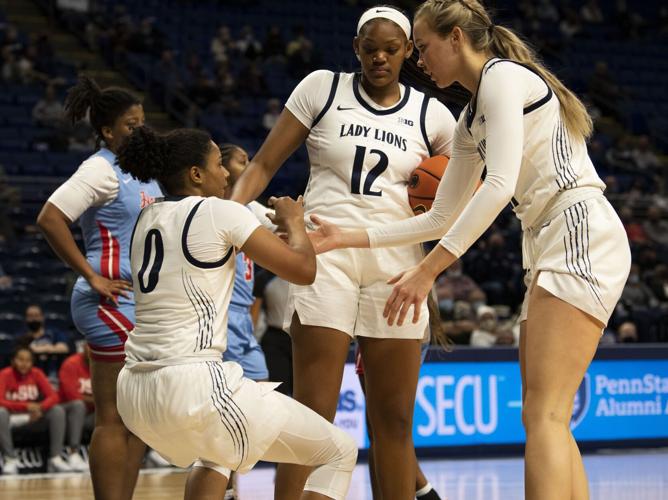 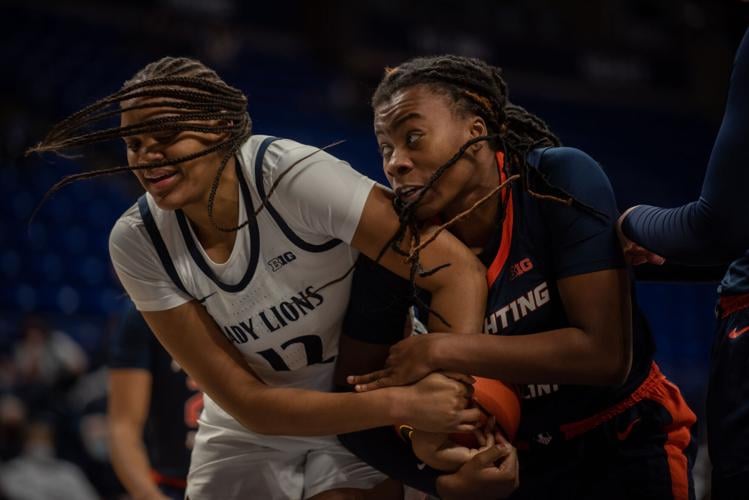 Penn State forward Kayla Thomas (12) wrestles for the ball against an Illinois player in their game on Jan. 16, 2022 at the Bryce Jordan Center in State College, PA. Penn State won the matchup 90-72.

Editor's note: A previous version of this article included Tova Sabel and Maddie Burke, and both have publicly announced their commitment to different basketball programs for the 2022-23 season. The Daily Collegian apologizes for this error.

If the 2021-22 season for Penn State proved anything, it was that its players didn’t always step up when they needed to.

Brought down by an eight-game losing streak spanning from Jan. 23 to Feb. 13, the Lady Lions will have major improvements to make going into next season.

Guard Makenna Marisa was the only glimmer of light in the dim 11-18 season for the blue and white.

The main struggle for the Lady Lions was their inability to compete with Big Ten teams, as they finished with a record of 5-13 in the conference.

There were players outside of Marisa who also found their rhythm at times, but they failed to sustain it throughout the season.

Here are the two players who showed they can play at a high level but will need to do it more consistently if the team wants to take the next step.

Ymke Brouwer was unable to prove herself in her freshman year as she faced an injury that lasted for the duration of the season.

Brouwer’s numbers before Penn State should give the staff a lot to look forward to in the 2022-23 season. The Switzerland native averaged 16.4 points, 7.3 rebounds and 2.4 assists per game as a professional in Switzerland.

The 6-foot forward was also ranked as a 4-star recruit by Blue Star Europe before heading to Penn State.

It’s clear why coach Carolyn Kieger picked up Brouwer, with her pre-Penn State stats speaking for themselves. Heading into her first real season with the blue and white, though, Brouwer will have to earn her spot on the team just like every other player.

However, expect her to get meaningful minutes from the jump as the squad needs a player of Brouwer’s caliber to help it win more games.

Kayla Thomas had a lot of competition heading into her first year as a Lady Lion with two well-established stretch-centers, including Ali Brigham and Anna Camden, ahead of her on the depth chart.

A major area Thomas can contribute to in the future is on the boards, where Penn State ranked second worst in the conference — averaging just 33.2 rebounds per game.

Standing at 6-foot-3, Thomas was tied with Camden as the second-tallest athlete on the team last year. Her height alone should help the team win more rebounds as she gains more minutes.

Height also plays a big part in how a team guards the paint and stifles the opponent's ability to score baskets. This is an area Penn State’s defense will need to improve in, as it surrendered the third-highest shooting percentage in the Big Ten last year.

Thomas’ ability to contribute is partially reliant on her earning more minutes in the upcoming campaign. She averaged just 7.4 minutes last year in 18 games played.

In her limited number of minutes, the Maryland native averaged 1.8 points and 1.4 rebounds per game — which isn’t too bad with all things considered.

Perhaps Thomas can answer the bell and provide the above-average forward depth the team so desperately needs.

After an illustrious collegiate career, Penn State's Kelly Mazzante will be enshrined among …

In what was an overall disappointing year, Penn State still had positive moments throughout its season. Daniel Perez is a sports reporter for The Daily Collegian. He is a sophomore majoring in film.