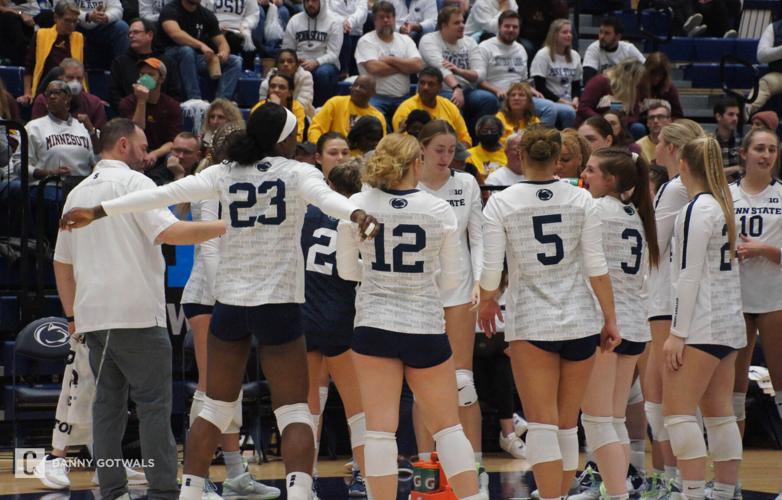 Outside Hitter Kashauna Williams (23) dances during a timeout at the Penn State women's volleyball game against Minnesota at Rec Hall on Nov. 18, 2022 in University Park. The Nittany Lions defeated the Golden Gophers 3-1. 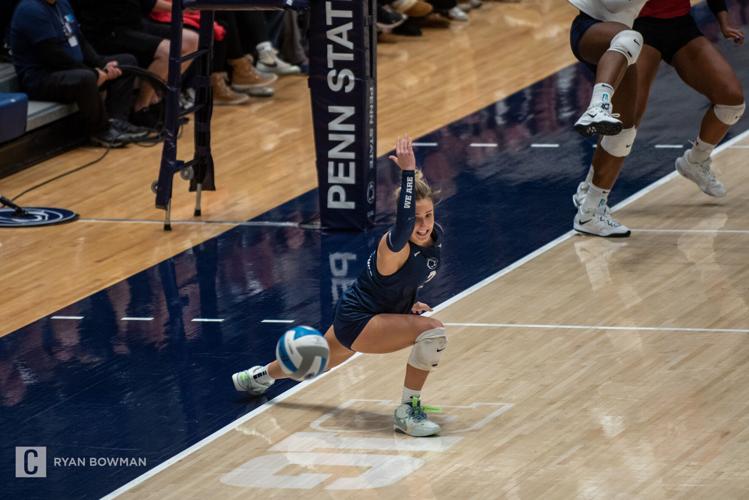 While playing in front of one of the toughest environments in the country, the blue and white struggled to get momentum at the net, despite strong back row play. The Nittany Lions’ season came to end in the third round of the NCAA Tournament 3-2.

In Penn State’s 19th Sweet 16 appearance in the last 20 years, it was an atypical night for Lions certain standouts as senior outside hitter Zoe Weatherington and graduate student outside hitter Kashuana Williams were held to -.031 and -.018 hitting percentages, respectively.

In the early going, a 4-0 Wisconsin run was spearheaded by redshirt sophomore outside hitter Sarah Franklin to put it ahead 7-3 and force an early timeout from coach Katie Schumacher-Cawley. Penn State continued to struggle with errors and trailed 11-7 after a service error from sophomore defensive specialist Cassie Kuerschen.

Wisconsin continued to show why it’s won 20 matches in a row as fifth-year middle blocker Danielle Hart and junior middle blocker Devyn Robinson built a brick wall in the middle, forcing Penn State hitters to struggle in route to a 16-11 lead.

As the Badgers continued to pull away from the Nittany Lions with a 7-1 run, Clark and graduate student setter Seleisa Elisaia held their team in the match. Feeling some more momentum, Weatherington tallied three kills in a row and forced a Wisconsin timeout trailing 22-18.

The blue and white continued to climb back into the first set with Weatherington leading the charge. After a challenge from Schumacher-Cawley cut the Wisconsin lead to 23-21, the Badgers closed the opening frame with two straight points, doing so while hitting .345.

While getting out blocked 7-0 in Set 1, the Nittany Lions looked to turn the tide at the net and avoid going down 2-0 in the match. It was a back-and-forth early going to Set 2 and after a solo block from freshman outside hitter Alexa Markley, the two sides were knotted at 9-9.

As both teams traded points, Wisconsin took command first and limited Williams at the net on consecutive plays, forcing an attacking error from Grimes to extend the Badgers lead to 15-12 with a 5-1 scoring run.

While the Badger faithful created the energy from the stands, Franklin and junior middle blocker Carolina Crawford created their own energy at the net, tallying back-to-back double blocks to extend the Wisconsin lead to 19-14 and forcing another Penn State timeout.

Despite Williams hitting for a -.103 hitting percentage after Set 2, the back row for the Nittany Lions kept long rallies alive as Grimes and junior libero Maddy Bilinovic continuously gave their squad a chance. However, Wisconsin’s attack proved to be too much, taking Set 2 25-19.

With Set 3 underway, Penn State held the Badgers in check and used a 3-0 scoring run to take an early 8-6 lead.

Williams and Weatherington found their stride midway through the third set and after a kill from each of the veterans, Penn State extended its lead to 15-12. The home team responded immediately with a pair of 3-0 scoring runs as sophomore middle blocker Anna Smrek powered home a pair of kills to give the red and white a 18-16 lead.

With the momentum resting with the Badgers, the blue and white’s hopes of a 3-0 scoring run were negated as a challenge call was overturned, giving them a 20-18 advantage.

Markley found some confidence in the closing stages of Set 3 and after forcing an attack error, the freshman smashed a kill off the blockers to tie the score at 21-21 and cause Wisconsin to call a timeout. Penn State closed out the set by scoring seven out of the last nine points to win Set 3 25-23.

Despite the errors continuing to add up from the Nittany Lions, the middle blocker duo of Clark and Holland each provided kills as service aces from Kuerschen and Grimes gave the blue and white the 11-10 advantage.

With Penn State needing a win in the crucial fourth set, the graduate students showed out in a big way. Kills from Williams and Clark were built on by a double block from Elisaia and Clark, giving the Nittany Lions a 15-12 advantage.

Elisaia and Clark continued to do it all for the blue and white as the duo extended the Penn State lead to 18-13. However, Wisconsin responded right back, rattling off three consecutive points to cut the deficit to 18-16 after a service ace by junior setter MJ Hammill.

While the Nittany Lions struggled to close out sets during the regular season, that wouldn’t be the case during Set 4 as the blue and white tallied a pair of 3-0 scoring runs as a kill from Weatherington and service ace from Kuerschen closed out a 25-20 set win.

After Williams kicked off Set 5 with a kill, back-to-back errors from Elisaia gave Wisconsin an early 4-1 lead in the final set and forced a timeout from Schumacher-Cawley.

Despite a solo block from Williams that cut the deficit to three, another error from Elisaia was followed by a kill from Franklin and Wisconsin extended its lead to 8-3 as the two teams switched sides.

With its backs against the wall Penn State put together a 4-1 scoring run and trailed 13-8. However, Wisconsin closed out Set 5 in style as a kill from Crawford was added on by a service ace by Joslyn Boyer to win the set 15-8 and the match 3-2.

With the Sweet 16 on the horizon, Penn State’s tournament run could get even sweeter with an…

Penn State finished the 2022 season ranked No. 11 in the AVCA Coaches Poll.

Tyler Millen is a men's basketball and baseball reporter for The Daily Collegian. He is a sophomore majoring in digital and print journalism with a minor in sports studies.

t looks like the spoons under everyone’s pillows worked as Penn State held its first snow day of the year. “Wrap Around” co-hosts Braden Dyreson and Nick Stonesifer decided to make the most of the day by trekking out into the snow.