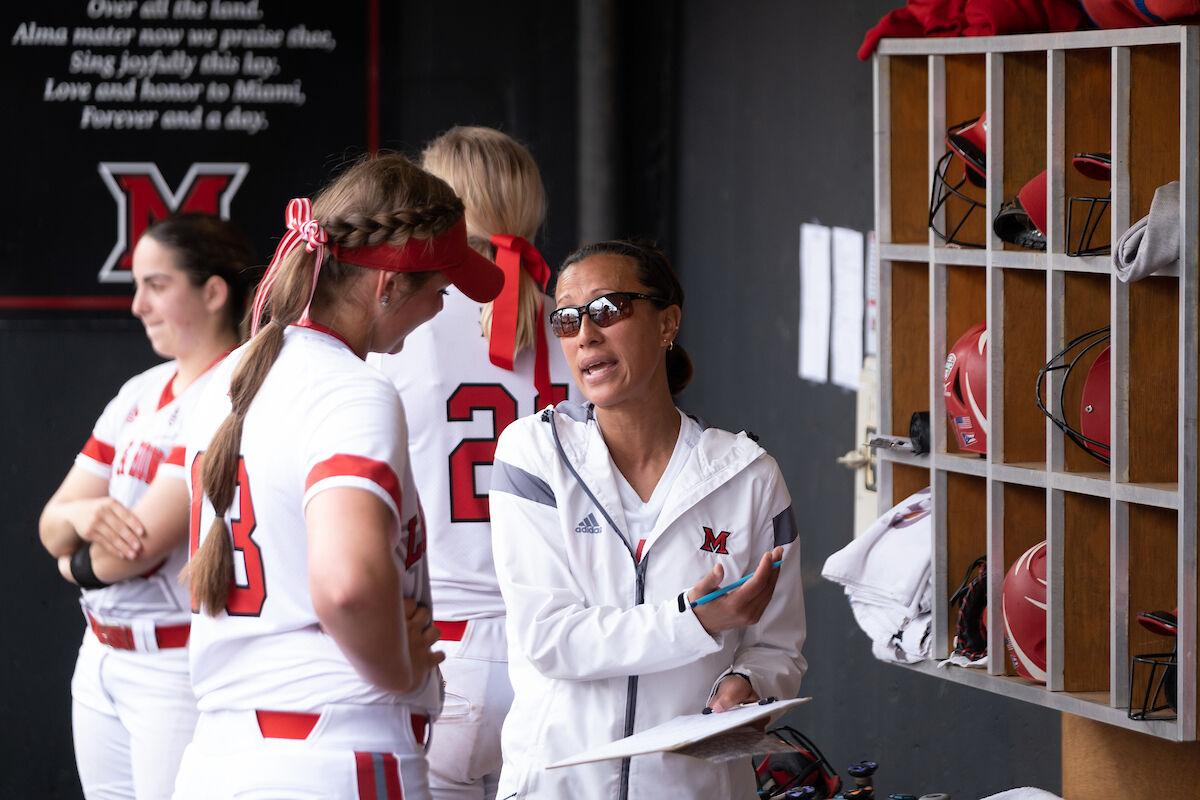 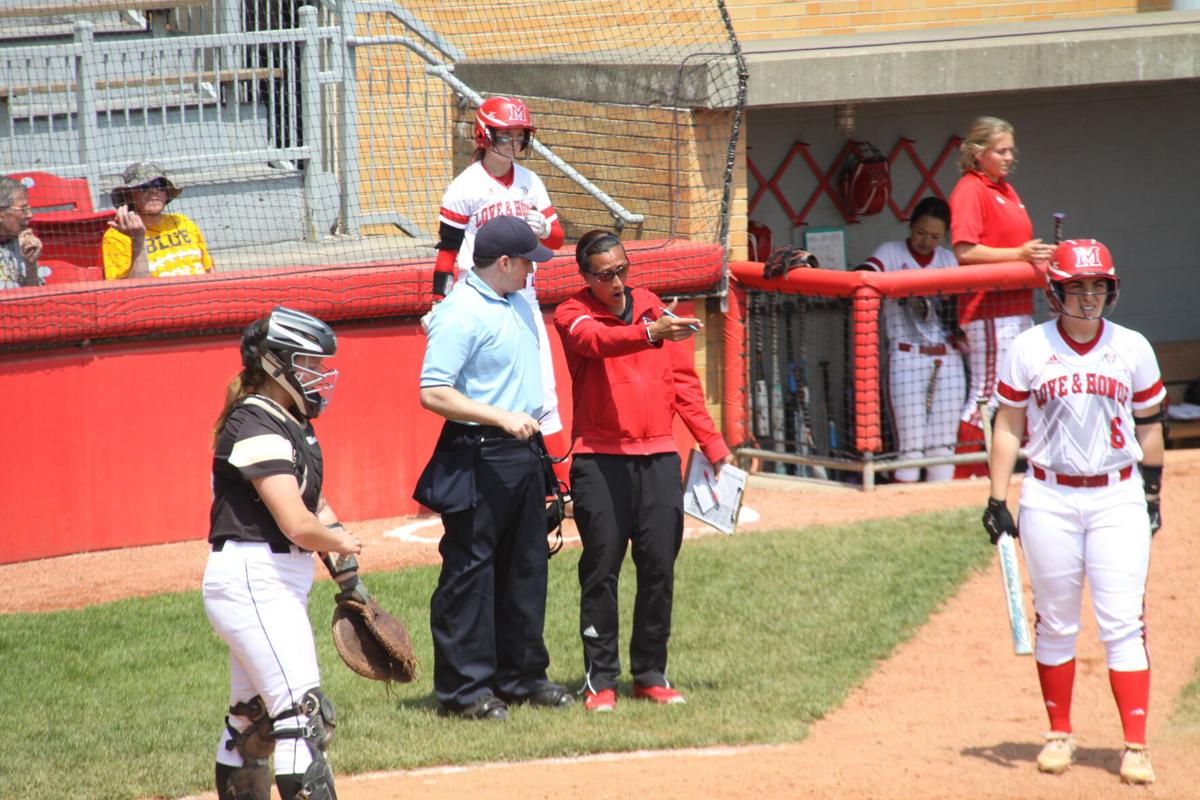 Former Miami (Ohio) softball coach Clarisa Crowell (in red) talks to an umpire during a game. Crowell was officially introduced as Penn State's next softball coach on Friday, Aug. 21, 2020.

If you’ve ever watched the Disney movie Lilo and Stitch, you know that the term Ohana means family — and family means that no one gets left behind.

A term also used by new head coach Clarisa Crowell when describing her team culture philosophy, Ohana defines the team as a family.

The Ohana philosophy was described by Crowell in her introductory press conference after being named Penn State's new softball coach on Aug. 3.

Crowell, a native of Hawaii, describes her childhood as one where she and her family lived by Aloha and Ohana — and how it has translated to a team philosophy.

“With Hawaiian people, the concept of you live by is Aloha which means you live by love and you are a family person. If you know anything about Polynesian culture, we are very family-oriented and those two things in my life drive me to operate the way that I do,” Crowell said.

The philosophy is one she’s grown up with and implemented with her previous teams, including Miami (Ohio).

“A couple years ago, I said I was going to be a little more intentional when it came to culture, what it is, what it means,” Crowell said. “Our student-athletes at Miami knew what we were about there, but it takes time to build that. First and foremost, we are building a culture of family and 'Ohana'. It’s going to start with that. My kids will have to understand my standards and expectations, and one of those is a commitment to excellence.”

At a time where team gatherings, workouts and bonding exercises are discouraged, Crowell and her coaching staff are not focused on the X’s and O’s of softball just yet.

“You need to win the people and you need to build a culture. That is my primary focus right now,” Crowell said. “I need to bring our kids together, I need to create an atmosphere that they feel like they can thrive in — a family-like atmosphere.”

These “family” gatherings among the athletes and coaching staff have started virtually over Zoom. Plans have been made for socially distanced campus tours, take-out dinners in the outfield of Beard Field and more.

Prioritizing getting to know the players as people off the field first before analyzing any of their on-field play is Crowell’s main goal in the current climate, and one that fits well with the culture and mindset she wants her players to adapt.

“Obviously we are in some pretty tough times, but I feel great about the leadership here and I know that they’re going to get us through this. Right now, I’m just really excited to meet our student athletes in person,” Crowell said.

In her previous head coaching position at Miami, Crowell was the 2019 Mid-American Conference Coach of the Year and is the winningest coach in school history.

Before this summer, a couple of former Penn State lacrosse players had never experienced any…

Crowell described what she hopes to transition from Oxford to State College. Beyond the traditional five tools needed to excel at softball — arm strength, speed, fielding, hitting for power and hitting for average — Crowell is looking for certain intangible qualities in this crop of Nittany LIons: good work ethic, grittiness and respect.

“My student athletes at Miami were hard-working, gritty, resilient, respectful and they did things the right way,” Crowell said. “That is something that I will look to build here eventually at Penn State. However I need to see where our team is at, so I can come in here with a vision and a plan.”

Seeing where her team is at means virtual team meetings. As described by Crowell, she discusses important topics related to team culture with her student-athletes, including why they decided to attend Penn State and what Penn State softball culture looks like.

“Although I have a vision and a plan, I’m trying to see where our student-athletes are at and where our team is at,” Crowell said. “I’m starting there [in order] to figure out where we are as a team and how we’re going to mesh the values and standards I have as a coach. I’m a big culture person and I love talking about it. It’s one of those words that people throw out, but they don’t actually know what it means or what their particular team or organization is about.”

Crowell keeps an open-mind when talking to her student-athletes about their experiences at Penn State and being a part of the team, but she knows what her values and plans are as well as when the right time is to focus on culture versus skill level.

“Right now, I just have to get to know my student-athletes first and foremost. I’m a firm believer in comprehensive excellence, so that’s why I feel that Penn State is the perfect fit for me. We will develop them as people, as leaders, and as students," Crowell said. "I also expect for us to excel out on the field. The softball piece is on the back burner right now because there are some other things that we need to get done on the front end."

Alexis Yoder is a women's basketball reporter and podcaster for The Daily Collegian. She is a sophomore majoring in broadcast journalism with minors in sports studies and Spanish.

When Penn State announced only freshmen would be allowed to attend this year’s final football practice, senior Matt Long was disappointed. After all, Long (senior-digital and print journalism) thought it would have been his last opportunity to experience the Nittany Lions play in Beaver Stad…