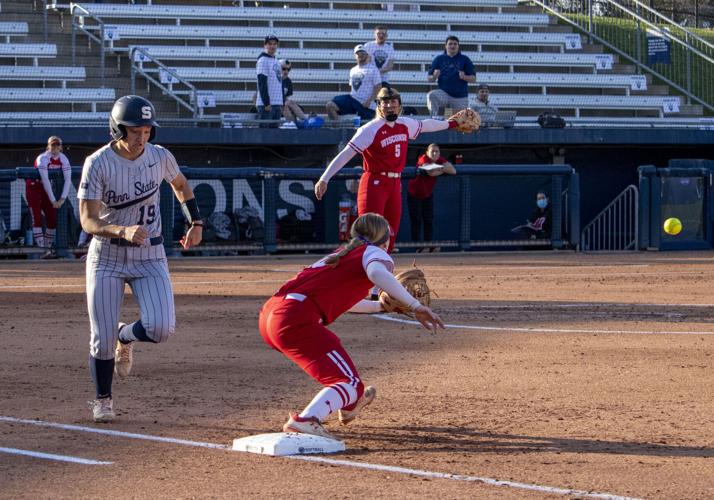 Infielder Lexi Black (19) charges towards first as Wisconsin players throw to first to get her out during the Penn State Softball vs. Wisconsin game on Friday, April 29, 2022 at Beard Field in University Park Pa. Penn State was defeated 1-0 in the tenth inning. Black was called safe on to first by empires. 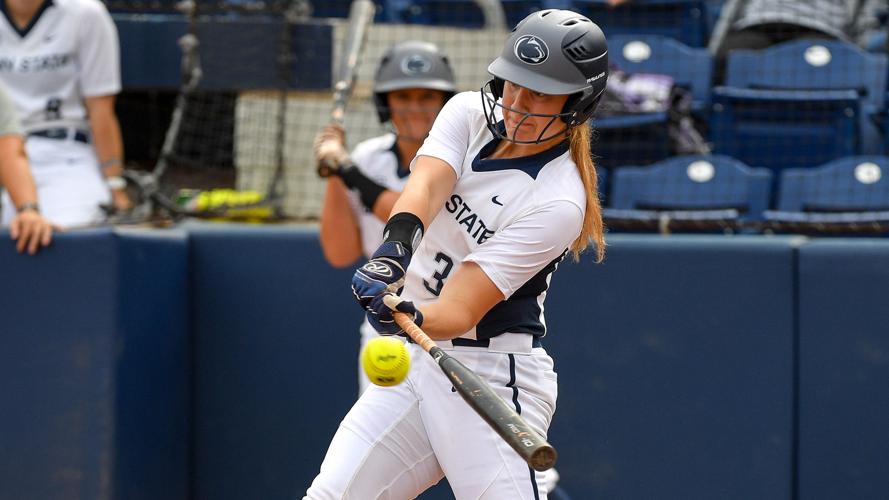 With a final score of 2-1, the blue and white kept themselves alive and will take on Nebraska on Thursday.

Senior lefty Bailey Parshall took the circle for the blue and white, facing off against Hoosier pitcher Heather Johnson.

The game remained scoreless until the bottom of the third when senior Nittany Lion Ally Kurland’s double into left-center scored senior Lilia Crouthamel from second.

Indiana scored in the top of the fourth off the bat of first baseman Brianna Copeland, evening the score at one apiece.

The game remained 1-1 through the seventh, forcing it into extras before Lexie Black’s single walked things off to secure the win.

Penn State’s top arm made yet another appearance in the circle, this time in a start in the postseason.

Parshall’s appearance against Indiana is her second consecutive start and fifth straight appearance in a blue and white game.

Wednesday’s outing for Parshall was similar to her last, as she kept her opponent guessing early and pitched herself out of several tough situations down the stretch.

Over her eight innings, the Nittany Lion issued no walks, struck out six and kept her team alive to fight another day.

The combo made up the team’s top two performers in most offensive categories, including OPS, slugging percentage and hits, among eligible players.

In their team’s matchup with Indiana, Lindmark led off the game with a double but was unable to score in the first while Kurland followed suit with an RBI double in the third.

Lindmark became the first and only Nittany Lion to record two hits in the game, singling to center field in the eighth.

After beating Indiana on Wednesday, the Nittany Lions will take on Nebraska Thursday at 11 a.m. on the Big Ten Network.

The Cornhuskers are the second seed in the tournament and feature the most efficient offense in the conference from the regular season.

Scarlet and cream catcher Ava Bredwell was named the Big Ten Freshman of the Year and finished sixth on her team in batting average in the regular season — a mark better than all but one qualifying Nittany Lion.

Nebraska’s pitching ranked just eighth in the conference in ERA, a weakness the blue and white will need to exploit if it wishes to pull off the upset.

After taking down 10-seed Indiana the day prior Penn State looked to upset two-seed Nebraska in the quarterfinals of the Big Ten Tournament.

Michael Planey is a softball reporter for The Daily Collegian. He is a first-year student studying engineering.