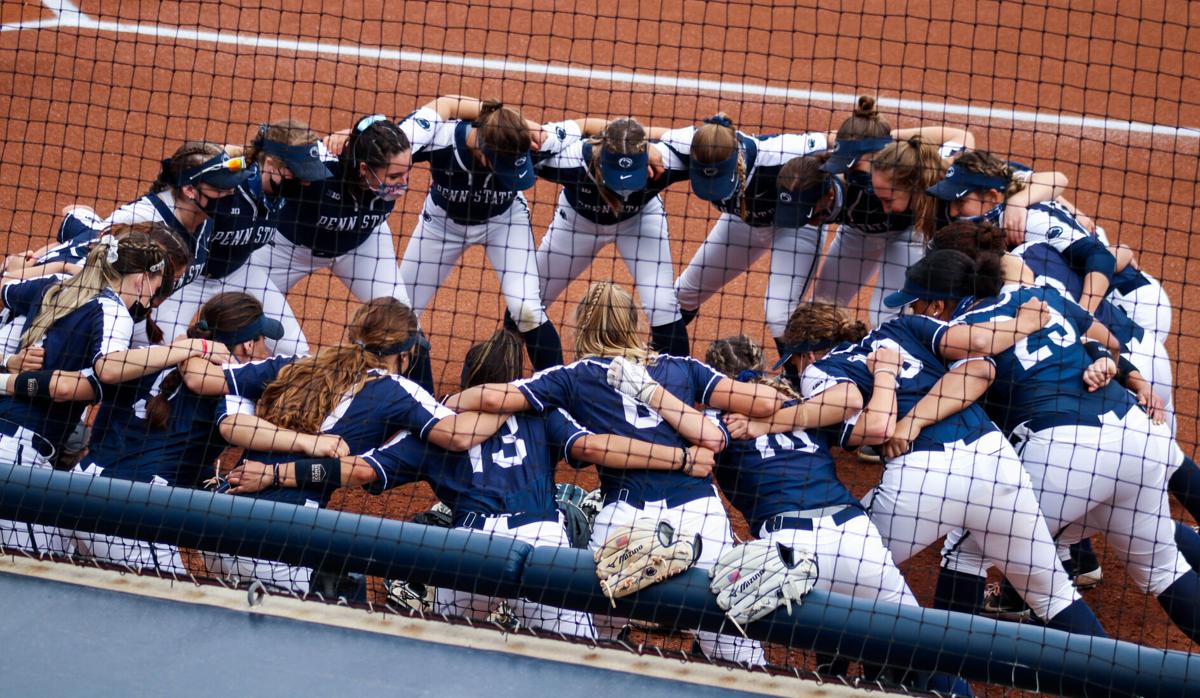 Teammates gather in a huddle before Penn State Softball's double header against Rutgers on Saturday, April 10th at Beard Field in University Park, Pa.  The Nittany Lions won the first game 4-2 and the second 4-3 against the Scarlet Knights. 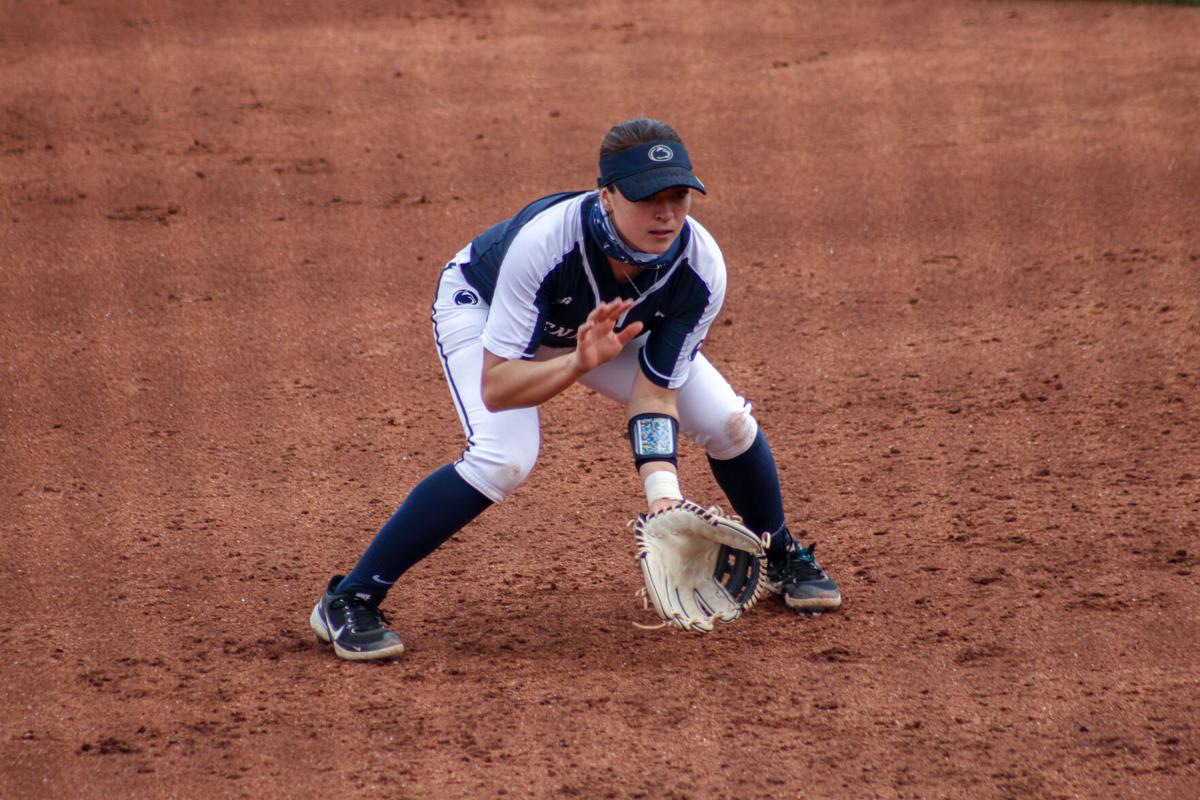 Infielder Michelle Leone (9) warms up before Penn State Softball's double header against Rutgers on Saturday, April 10th at Beard Field in University Park, Pa.  The Nittany Lions won the first game 4-2 and the second 4-3 against the Scarlet Knights.

Penn State softball didn’t have the year it hoped for in 2021, having a young team with a first-year head coach trying to navigate through the coronavirus pandemic — hardly ideal circumstances.

There is good news, though, as the team should have a lot of depth in 2022, especially on the infield. And anytime there’s depth, there are sure to be position battles.

Here’s a look at how some of those battles on the infield could shake out and how second-year coach Clarisa Crowell may elect to deploy her defense.

Outside of catcher Ally Kurland, no player has a stronger grasp on her position than second baseman Melody Coombs. After arriving on campus as a consensus top-40 recruit, Coombs’ freshman season was one of the lone bright spots for the Nittany Lions.

She played some outfield early in the season, but Coombs settled into second base where she finished third on the team in slugging, second in batting average and second in home runs.

Coombs added nine stolen bases on the year and wasn’t thrown out once. She finished tied with Lilia Crouthamel for the team lead.

Coombs’ versatility affords Crowell the option of shifting her around the diamond or into the outfield, but wherever Coombs is playing, she will be one of the centerpieces of the offense.

Kaitlyn Morrison arrived on campus in 2019 with a top-100 recruit label attached to her name.

In her freshman year in 2020, she started every game and led the team in hits before the pandemic ended the season. Her slugging and on-base percentages both exceeded the Big Ten average, and she held down the all-important shortstop position.

In 2021, Morrison maintained her starting spot at short but saw a decline in production at the plate. Her on-base percentage fell over 100 points.

Despite the disappointing season, it’s hard to see Crowell going away from Morrison in 2022, — especially if she can find the swing she had in 2020. She’s the only player with real shortstop experience on the roster and has made all but one start since she’s been on campus.

In A Position Battle

On a team full of breakout candidates, Michelle Leone might be the most intriguing. The rising junior from Florida saw her numbers at the plate improve in 2021 after struggling a bit in 2020.

Leone gives Crowell options, having made starts at second and third base. Coombs solidified the second base position down the stretch in 2021, but the departure of Melina Livingston leaves third base up for grabs, and Leone is a strong candidate to fill that spot.

Leone led the team in walks last year while only striking out in 8% of her at-bats. An offense that struggled with both those categories in 2021 could certainly use a more consistent bat in the lineup.

Claire Swedberg had a great freshman year in 2019. She got on base over 40% of the time while stealing 10 bags. In just 14 starts in 2020, she put up similar numbers, but last year was a different story.

Swedberg saw a significant decline at the plate and didn’t tally a single stolen base. She made 10 starts and saw time at second base as well as a pinch runner.

Swedberg hasn’t moved around the diamond much, so if Coombs is still at second, it’ll be interesting to see how Swedberg finds the field. Swedberg is athletic and has speed, so one would think she could play the outfield.

All things considered, Swedberg has had more good years than bad, and the rising senior is a solid bounce back candidate in 2022.

It’s tough trying to slot Maggie Finnegan heading in 2022. Finnegan was a top-200 recruit in 2019 and has started most games since debuting in 2020.

Finnegan has seen time at four positions in her career but primarily started at first base last year.

In her freshman season, Finnegan led the team in batting average before the season was cut short. She struggled to find that same magic in 2021, but she did steal five bases.

Finnegan likely has a leg up on the competition at first base. Unlike second and third base, there aren’t a ton of players on the roster with experience there.

The other option that could make sense would be Chelsea Bisi, who was one of Penn State’s best bats as a DP last year, but she could be needed in the outfield or stay put as DP.

Even with the struggles last year, this seems to be Finnegan’s spot to lose until further notice.

Lexie Black is another name that could be tossed into the hat for first base. The rising junior made her Penn State debut in 2021 after transferring to Happy Valley.

While Black struggled at the plate, her .986 fielding percentage was the best on the team among position players who got significant time. If she doesn’t earn a starting spot in the spring, the junior will likely still see a fair amount of action.

Lauren Marcotte is a talented player who has seen limited playing time since arriving in 2020. She did not play her freshman season and made her debut last year.

It’s not smart to evaluate a hitter who’s had less than 30 career at-bats, but Marcotte’s OBP was above the team average in 2021. In high school, Marcotte crushed at the plate for all four years and got national recognition from USA Today as early as her sophomore year.

Marcotte played second and third base last year where she only made two errors. Her potential as a slugger combined with her glove make her a solid option for Crowell and staff.

Emily Maddock is in the same boat as Marcotte, having only made six career starts. Despite that, she’s a name to keep an eye on, as she can play all over the field.

Maddock was a multisport athlete in high school and was a consensus top-100 recruit in 2019. Her ability to play all over means there’s sure to be a spot in the lineup if she lives up to expectations.

For student-athletes across collegiate athletics, the freshman season is generally defined by adjustment and laying groundwork for future success.