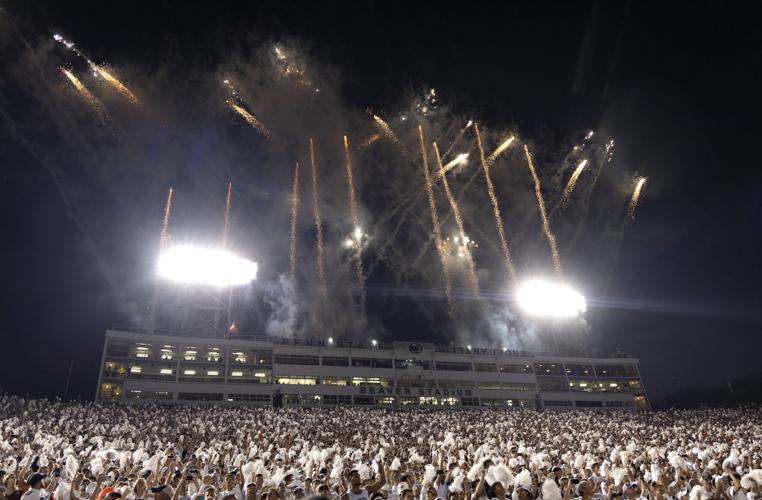 Fireworks go off over Beaver Stadium at the starts of Penn State football’s White Out game against Auburn, Saturday, Sept. 18, 2021 in University Park, Pa. The Nittany Lions beat the Tigers 28-20. 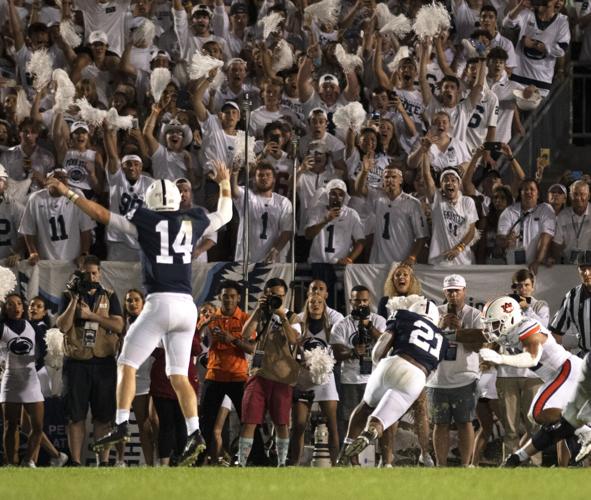 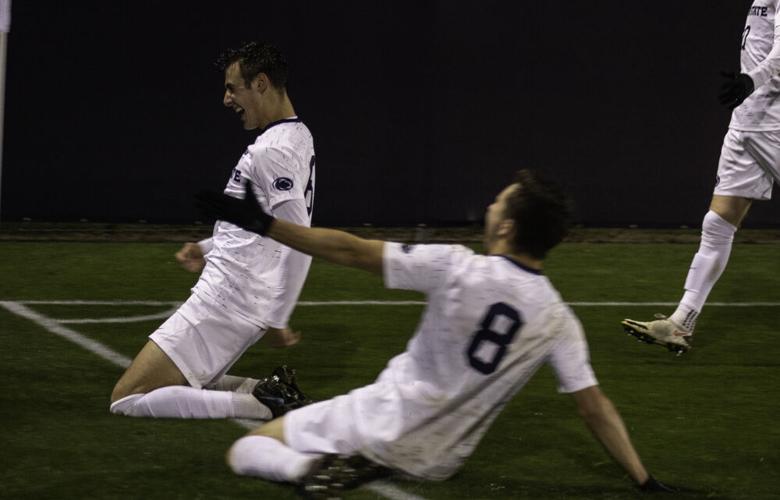 Midfielder Andrew Privett (6) celebrates after scoring the overtime goal to beat Maryland on Tuesday, Oct. 26, 2021 in University Park, Pa.  The Nittany Lions defeated the Terrapins 3-2 in an overtime game. 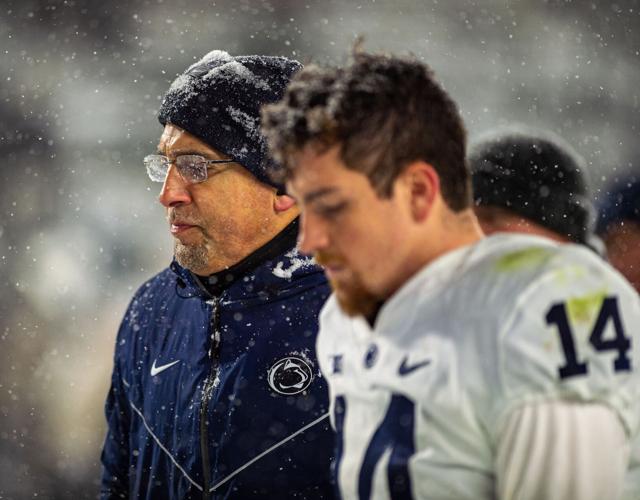 The sports of the 2021 fall semester have played out like none other, and this time — the coronavirus isn’t dominating the headlines.

For two entire classes, the fall semester has provided the opportunity for students to have firsthand experiences of Penn State sports.

While the fall contained at least as many newsworthy events as its predecessors, Penn Staters will talk about many of these events for years to come.

The return of the White Out

In an “unrivaled” tradition in college sports, the then-No. 10-ranked Nittany Lions faced off against the No. 22 Auburn Tigers under the lights of Beaver Stadium.

College GameDay made a stop in Happy Valley for its fifth visit in as many years, as Penn Staters showed up early and stayed late to embrace Penn State folklore — all while wearing white.

The game was tight, and neither team could pull away on the scoreline. But the sea of white turned out to be too much for the visitors, and the Nittany Lion faithful got everything it wanted — watching a 28-20 Penn State win.

Quarterback Sean Clifford came to play, throwing 28-for-32, reaching 280 yards on the night and striking on two touchdowns — one of which found the hands of Jahan Dotson on his way to a second team All-Big Ten season.

Perhaps most memorable of all, though, was the energy brought to Beaver Stadium as 109,958 fans got to embrace a storied Penn State tradition for the first time in nearly two years.

Men’s hockey puts on show in Hall of Fame Game

Playing their first game outside Pegula Ice Arena, the Nittany Lions brought their best to Nashville, Tennessee, to face off against the No. 6 North Dakota Fighting Hawks.

The two teams played a nail biter in Bridgestone Arena, culminating in a Penn State upset with a final score of 6-4.

Both teams appeared excited to play on NHL ice, as the game was filled with penalties, many of which coincidental, giving the blue and white the ability to score three power-play goals.

This was Penn State’s sixth win through its first seven games.

Although the top-10 victory was followed by four consecutive losses, defeating the Fighting Hawks proved the potential Guy Gadowsky and company carried going into conference play.

A Homecoming for the history books

Current students and alumni alike were present to watch Penn State and Illinois battle in one of the longest FBS football games in history.

Donning their “Generations of Greatness” jerseys for the first and only time over the course of the 2021 season, the Nittany Lions welcomed the Fighting Illini onto a heritage-themed field during their Homecoming weekend.

Clifford was taking his first snaps under center since he left in the midst of Iowa’s come-from-behind win over Penn State, as the blue and white was looking for yet another dominant performance in its star quarterback’s return.

Only this time, the redshirt senior was unable to deliver, and the Nittany Lions fell 20-18 to the navy and orange for their first home loss of the season.

The two teams slugged it out across a record nine overtimes, starting the contest at noon but not leaving the field until after 4 p.m.

Thirty-one minutes into the penultimate match of regular season, Penn State already found itself two goals down against No. 7-ranked Maryland and with its Big Ten regular season title hopes on the verge of evaporation.

The Nittany Lions shut down the Terrapins in the second half, allowing only two shots and scoring two goals of their own to send the match into overtime.

The win over Maryland provided the necessary spark to clinch the Big Ten title with a blue and white shutout over Wisconsin and Indiana falling in the last game of the season to hand Penn State its first piece of silverware since 2013.

Penn State followed up its regular season title with a Big Ten Tournament title without conceding a goal all tournament and besting Indiana in a rematch of the 2020 Big Ten Championship.

Starting off the season right, Penn State only needed one game to get newly hired head coach Micah Shrewsberry his first win as a Nittany Lion.

The Nittany Lions were dominant down low, outscoring the Penguins 44-18 in the paint with six times the number of Penguin second-chance points.

Shrewsberry has seen up-and-down results since then, but most notably, his team dragged a now-No. 25 LSU to overtime in a wild final sequence before ultimately losing the game 68-63.

Fresh off a Big Ten double, Penn State had high ambitions heading into the NCAA Tournament as the No. 12-seeded team in the competition.

The Nittany Lions earned themselves a first-round bye, and coming into the second round of the tournament, they were set to play CAA champion Hofstra.

Reportedly, the Big Ten regular season and tournament champions fell ill prior to the match, and on the night, the blue and white ended up being trounced in an 8-2 deluge on Jeffrey Field.

The Nittany Lions gave up all eight goals unanswered before finally putting themselves on the scoreboard but only after the Pride had emptied its bench with 12 minutes to play.

In a move that many Penn State fans either strongly support or strongly dislike, James Franklin was extended for an additional 10 seasons as the Nittany Lions’ head coach.

Franklin earned himself a $70 million contract due, in no small part, to his keen ability to recruit, amassing one of the top-10 commitment classes of 2022, including both the No. 1-ranked running back and quarterback, according to 247Sports.

During his tenure, he has earned one Big Ten Coach of the Year award, in the same 2016 season his Nittany Lions brought home the Big Ten title.

Franklin has coached this year’s 7-5 Nittany Lions to the Outback Bowl in Tampa Bay, Florida, making this his seventh bowl appearance with the program since his hiring in 2014.

Penn State has enjoyed a largely successful start to the season as many fans may have expected.

In a low-scoring duel, it was the Penn State defense that prevailed in a 52-48 victory over the Rutgers Scarlet Knights.

The NFHCA released its DI All-America teams Tuesday, and Penn state earned two spots in this year's rendition of the award.

Late into the MLS SuperDraft, two Penn state players had their tickets punched for the highest level of American soccer.