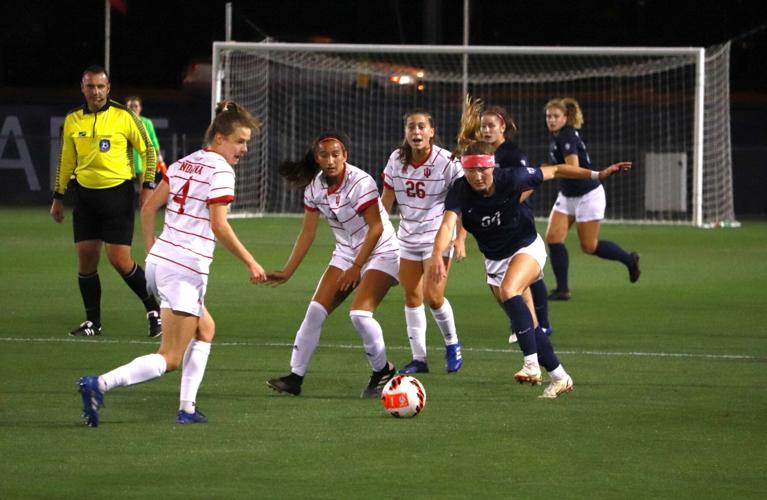 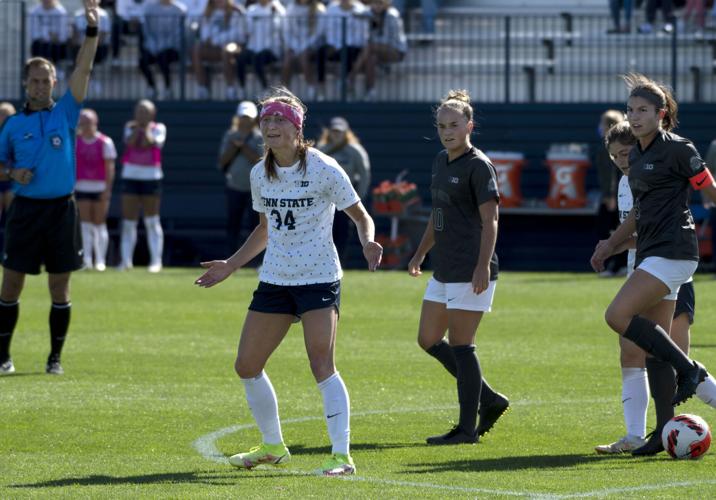 Forward Ally Schlegel (34) reacts to a call against her by the referees during the Penn State women’s soccer game against Ohio State at Jeffrey Field, Sunday, Sept. 26, 2021 in University Park, Pa. Ohio State beat Penn State 1-0.

The Scarlet Knights came to Jeffrey field with a perfect 9-0 record, but it wouldn’t stay that way for much longer.

The blue and white came away with a major upset taking down it's rival 2-0.

After the victory, coach Erica Dambach stressed the importance a win like this has for a program.

“That’s a really good team. They’re fast, dynamic and fun,” Dambach said. “It was a very complete performance from our group, and it was just a really fun night.”

The blue and white have one of the more explosive offenses in the nation, and it wanted to start fast and get contributions from its best players early.

Starting fast is exactly what Penn State did, as in the eighth minute Penelope Hocking fired a shot on goal that was initially saved before Ally Schlegel pounded the rebound home for the goal.

After the game, Schlegel mentioned she had been thinking about the battle against Rutgers for the past five days and wanted to make an impact.

Schlegel’s goal marked her team-leading fourth goal of the campaign, and it gave her team a much-needed energy boost.

“It’s just her brain,” Dambach said. “What we’re trying to do as a coaching staff and a program, she understands the tactics and then she’s got the calmness about her that people want to follow her. She’s a really special human.”

The Nittany Lions continued to attack the Scarlet Knights, with Natalie Wilson coming inches away from extending their lead to two goals.

It took Rutgers until the 19th minute to record its first shot on goal, but once it did, it ramped up the offensive pressure.

The Scarlet Knights ended the first half outshooting the blue and white 10-5, and the lack of offense was something Dambach addressed with her team.

“I think a big part was that they had the wind, we were fatiguing, we had made some substitutions and they got on the front foot,” Dambach said. “We bent, but we didn’t break.”

Penn State opened the half looking to extend its advantage, and it leaned on its veterans to help the scoring attack.

Schlegel once again was in the center of it all, making a play in the middle of the field, and setting up Hocking for a breakaway.

Hocking found herself all alone facing the goal, and the USC transfer made no mistake firing the ball past goalie Meagan McClelland.

Schlegel’s assist marked her first this campaign, and once again, it was another hustle play from Penn State’s redshirt senior.

“Throw-ins aren’t a time to switch off, and you see that defensive throw-in, boom transition moment and we score a goal,” Schlegel said. “It really comes down to being focused in every moment and doing our jobs”

Hocking was the Trojans' all-time leading scorer, and she made headlines transferring to Happy Valley over the offseason.

The Anaheim, California, native tallied the score in the 55th minute, and it was the culmination of newfound chemistry between the duo of Hocking and Schlegel.

“I met her for the first time at IU 23 camp, and we became buddies right off the bat,” Schlegel said. “She's a two-time All-American. That is a phenomenal player that I get to learn from every day.”

The late stages of the contest were marked by both teams failing to capitalize on scoring chances and the blue and white coming up with several key defensive plays.

The win marks the second straight season that the Nittany Lions have beaten a team ranked within the top-five after they took down No. 3 Virginia a year ago.

Penn State is back in action on Sunday against Illinois, and Schlegel emphasized the importance of not being complacent after capturing a huge upset.

“I think what will prove for us to be an elite team is when we come out on Sunday and show the same effort that we just put in today,” Schlegel said. “ Moving forward, it's all about the team focusing on our details.”

No. 17 Penn State women’s soccer hands No. 4 Rutgers its first loss of the season

For the first time all season, Rutgers lost a game.

State College, Pennsylvania, is a beautiful town, smack dab in the center of the Keystone State, that enjoys equally lovely weather — precipit…

The Daily Collegian introduces a new podcast to the network, "It's Not That Deep." Hosted by Collegian editors Phoebe Cykosky and Olivia Estright, the duo will share stories and advice on how they strive to approach their daily lives as Penn State students less seriously.