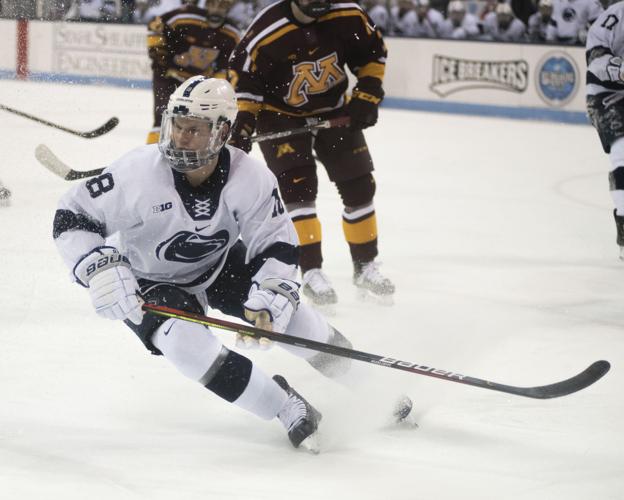 Defenseman Clayton Phillips (18) defends against a Minnesota player during the men’s hockey game against Minnesota at Pegula Ice Arena on Saturday, Feb. 22, 2020. 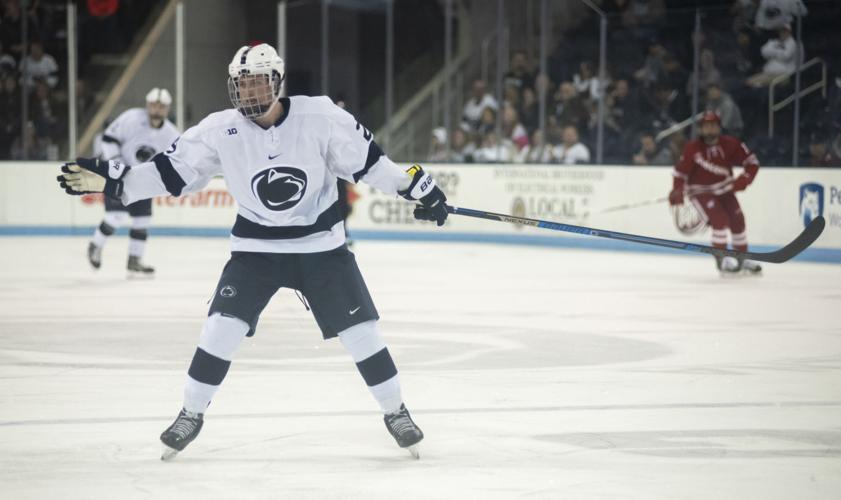 Adam Pilewicz (24) defends against a Wisconsin player during the Big Ten Men's Ice Hockey Tournament against Wisconsin at the Pegula Ice Arena on Mar. 10, 2019.

Following a regular season riddled with inconsistency, Penn State came together at the right time and went on a deep run in the Big Ten Tournament.

The Nittany Lions finished the 2021-22 campaign with a 15-18-1 record and went into the tournament with minimal expectations.

Entering as the fifth seed, the blue and white took on fourth-seeded Ohio State. The squad made conference playoff history, becoming the first road team to win a best-of-three Big Ten quarterfinal series with its Game 3 victory.

The Nittany Lions fell just one close game short of reaching the conference championship, losing to Minnesota 3-2 on the road.

Penn State is a young team, and many of its top players are returning next season with heightened expectations.

Penn State looks set to return all of the same offensive players from a season ago, but it was busy this offseason adding two transfers who will help put the puck in the back of the net.

Calder suited up in 141 contests in his first four years, the third-most among active players, while his 44 career goals and 100 points are both good enough for fourth. With the Fighting Hawks, the transfer forward ranked second on the team with 11 goals and tied for fifth with 21 points.

Linden spent four seasons at RPI, putting together a career year in 2021-22 while leading his team with 39 points. His goal and points numbers, 20 and 39, respectively, led the ECAC while also ranking top 25 in the nation.

The Nittany Lions also brought in Alex Servagno, who previously played for the Green Bay Gamblers in the USHL. Servagno put together his best season in 2021-22, scoring 15 goals and 41 total points in 59 contests.

In his three seasons in the USHL, he lit the lamp 35 times and dished out 50 helpers across 156 matchups.

The trio joins a loaded forward group with players such as Kevin Wall, Connor MacEachern and Ryan Kirwan returning for another season.

The blue and white lost Clayton Phillips and Adam Pilewicz but added three defenders who will look to step up when they get on campus.

Jarod Crespo, a past teammate of Servagno in the USHL, played the past two seasons with the Gamblers. Crespo served as the team’s captain and thrived this past year, logging eight goals and 20 assists in 58 contests.

Carter Schade decided to stay in state and play for the Nittany Lions, and it was a big get for Gadowsky.

After being selected with the first overall pick in the 2018 USHL Phase 1 Futures Draft, Schade spent two years with the Lincoln Stars.

This past campaign, the Mars, Pennsylvania, native had a career year with 31 points on 27 assists while ranking the best among Stars defensemen with a plus-21 rating.

The last defender is Dylan Gratton, who will join his older brother, Tyler Gratton, on the ice this season. Dylan played for three different programs in the USHL over three years, including the Sioux City Musketeers.

In 2021-22 with the Musketeers, he skated in all but two games while scoring three goals for 18 points. His plus-minus tied for fourth on the squad with a plus-19 mark.

Penn State struggled in net last year, routinely rotating between Liam Souliere and Oskar Autio before Souliere took over late in the season.

However, with Autio transferring to Vermont, the backup goalie spot is an area of question.

Gadowsky added Noah Grannan, who played the past two USHL campaigns with the Sioux Falls Stampede. Last season, Grannan played in 28 contests, recording a 10-13-3 record with a 3.25 goals-against average and a .891 save percentage.

During his USHL complete career, the first-year Nittany Lion goaltender compiled an 18-24-5 record.

Before playing in the USHL, the Germantown, Wisconsin, native spent the 2018-2020 seasons as a member of the United States National Team Development Program.

After four years on the ice with the Penn State, roads now lead to Calgary rinks at SAIT.

The 2022 Penn State season is just a little over a month away, and James Franklin is returning on a hefty contract for his ninth season as the…

What intramural sports are offered, and what they have to offer to returning and new students

There are so many different ways to get involved at Penn State, which at times can be overwhelming.

Coming off a season that they came up just short in, coach Jeff Kampersal and Penn State will look to have an even better year going into the …

Alex Rocco is a sports reporter for The Daily Collegian. He is a junior majoring in broadcast journalism with a minor in sports studies.