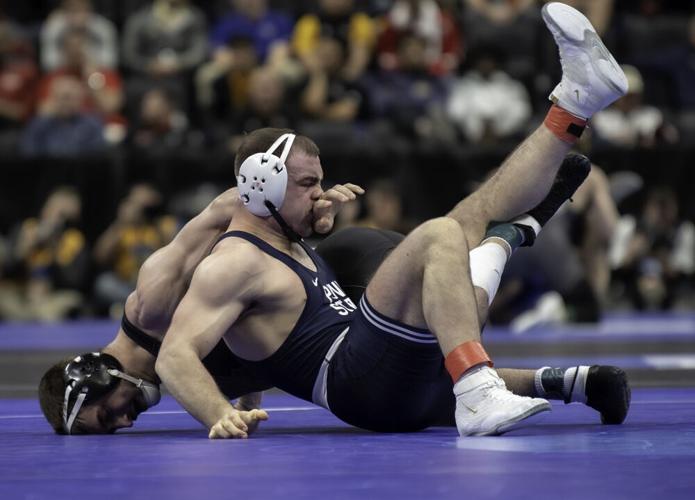 Penn State's Max Dean gets a hand to the face while taking on Binghamton's Lou Deprez during the NCAA Wrestling Tournament. Dean defeated Deprez 4-3, moving him to the semifinals as three-time All-American. 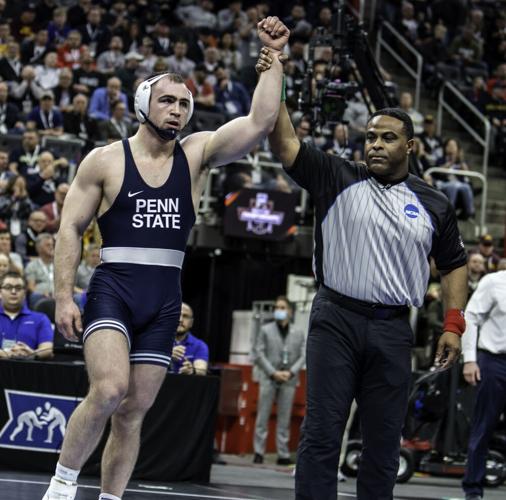 Penn State's Max Dean comes out on top after competing against Ohio State's Gavin Hoffman during the semi-finals of the NCAA Wrestling Tournament. Dean defeated Hoffman 9-3, advancing him to the finals.

After the seemingly unbeatable Aaron Brooks lost his first match of the season, No. 1 Penn State saw its lead shrink to 13-12 against No. 6 Iowa State.

The defending national champion was having a bit of a rough start to his 2022-23 campaign before Tuesday night. Dean had lost two matches in a row the week prior, falling to Rider’s No. 12 Ethan Laird, and to his former Penn State teammate, Lehigh’s No. 9 Michael Beard.

Despite a week that saw Dean eclipse his loss total from a year ago just one month into the season, his redemption arc was a quick one.

After the difficult three-day stretch, Dean dropped from No. 1 to No. 5 in the InterMat rankings. The senior’s opponent against the Cyclones was junior Yonger Bastida, who was 6-0 and ranked No. 2 in the 197-pound weight class.

Iowa State had all of the momentum heading into the bout on the heels of its victory at 184 pounds, but Dean was having none of that. Following a scoreless first period, Dean went to work.

After earning a quick escape to start the second, the Lowell, Michigan, product came out on the winning end of a wild scramble and took a 3-0 lead. He was able to maintain the lead, riding out Bastida for the remainder of the second.

Bastida escaped to begin the third, but not before Dean racked up enough time to earn the riding time advantage point. There were a few close calls, but ultimately Dean earned the hard-fought 4-1 victory over the higher-ranked Bastida.

To take a page out of Penn State basketball coach Micah Shrewsberry’s book, “gritty not pretty” has been the story of Dean’s career.

Dean has had a unique collegiate career in more ways than one, transferring to Penn State last season after wrestling for Cornell in seasons prior.

Max had a unique tie to Cornell, as his brother, Gabe Dean, was a back-to-back national champion for the Big Red at 184 pounds in 2015 and 2016. The Dean family had been tied to Cornell for many years, but Max was ultimately forced with a tough decision when the Ivy league canceled its wrestling season in 2020-21 due to the coronavirus.

With two seasons of eligibility remaining, Dean decided to take his talents to State College and join coach Cael Sanderson’s decorated squad. This turned out to be a good decision, as Dean was ultimately crowned national champion for the first time in his career last season.

Last year was not without its bumps either, as Dean fell to Michigan State’s Cameron Caffey in a dual meet. After that loss, not many anticipated Dean’s rebound that ultimately resulted in a national title for not only himself, but the team as well.

Like last season, the Nittany Lion bounced back from a tough loss in a big way. Dean’s style may not be as flashy as some of Penn State’s other top wrestlers, as many of his bouts come down to the wire.

Dean’s wins resulted in bonus points 46% of the time last year, the lowest of Penn State’s five champions. Despite the tightly-contested nature of many of his contests, Dean seems to have found a way to come out on top when it matters most.

This seems to be a common theme among Penn State wrestlers in recent years. That trend is in no small part due to the leadership of Sanderson, who was a decent wrestler himself in college, going 159-0 during his career at none other than Iowa State.

Dean, who walks out to “Maxwell's Silver Hammer” by The Beatles, is a bit of a hammer himself at 197 pounds. Dean clearly has a soft spot for the classics, and he himself has a classic wrestling style that has seemingly become rare in college wrestling.

Dean is only concerned about winning, and is a man on a mission as he hopes to follow in his brother’s footsteps and secure back-to-back national championships.

Max Dean was one of five Penn State national champions in the 2022 National Championships, b…

On Thursday, InterMat released its new rankings for collegiate wrestling, and one Nittany Lion shifted in the rankings.

As the holiday wrestling season comes to a close, four Penn State wrestlers moved in the latest Intermat rankings.

Jameson Kramer is a wrestling reporter for The Daily Collegian. He is currently a senior majoring in broadcast journalism with a sports studies minor.