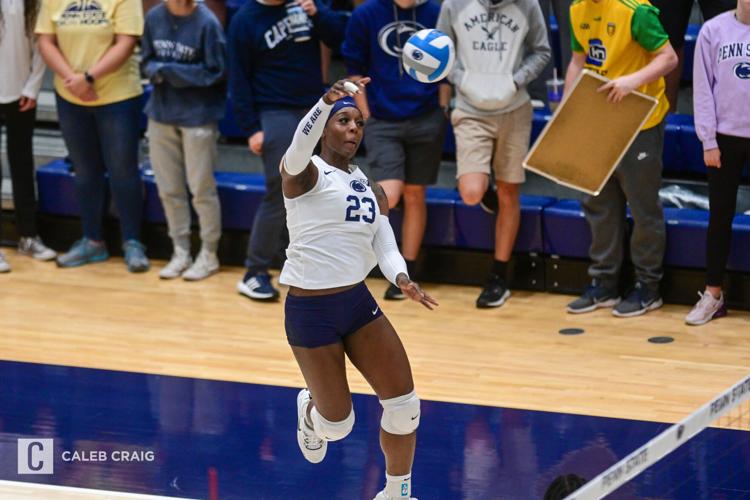 Outside Hitter Kashauna Williams (23) on a kill during Penn State volleyballs game vs Michigan State at Rec Hall on Sunday, Oct. 2, 2022 in University Park, Pa. The Nittany Lions downed the Spartans 3 sets to 1. 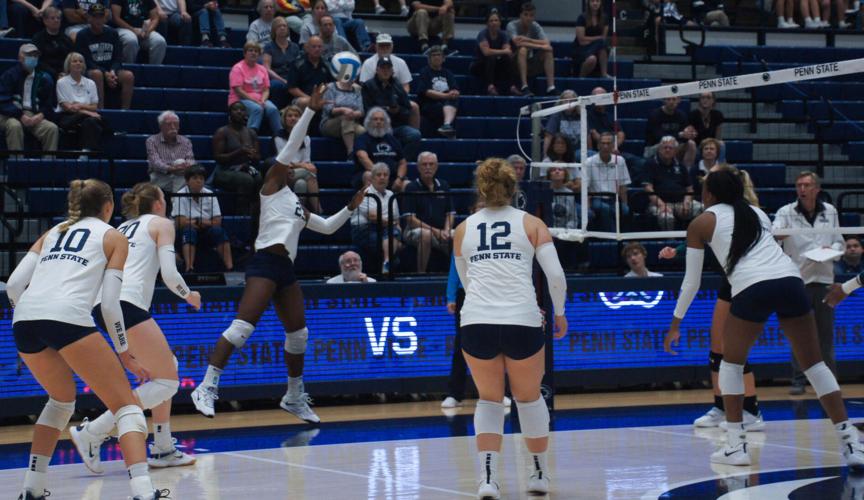 Outside hitter Kashauna Williams (23) hits the ball during the Penn State women's volleyball game against Coastal Carolina on Saturday, Sep. 17, 2022 at Rec Hall in University Park, Pa. The Nittany Lions defeated the Chanticleers 3-0.

No. 16 Penn State traveled to West Lafayette, Indiana, to face Purdue in a Saturday night matchup.

The blue and white came away with its first ranked win over a Big Ten team on the season, taking down the Boilermakers 3-1

The Nittany Lions started off on a positive note, finding themselves with an early 6-5 lead thanks to an attack error on Purdue’s side.

The blue and white offense allowed the Nittany Lions to stay in the game, with the offense finding itself in a back-and-forth match throughout the first half of the first set.

The Nittany Lions found themselves in a deficit throughout much of the second half of the Set 1, with every point being matched by the Boilermakers.

Giving up a 3-0 scoring run to Purdue late in the first set, the Nittany Lions found themselves down 22-17.

Thanks to a service ace from Purdue, the Boilermakers were able to take the 25-21 first set victory against the blue and white and jump out to a 1-0 set lead in the match.

The Nittany Lions found themselves in a similar situation from the first set, as the Boilermakers kept up with the blue and white’s tempo.

Sophomore libero/defensive specialist Cassie Kuerschens’ service ace gave the Nittany Lions some momentum in the second set, giving them a 9-6 lead against the Boilermakers.

Penn State found itself in a tight back-and-forth match throughout much of the second half, finding itself up only 16-14 after a graduate student middle blocker/right specialist Katie Clark kill.

The Nittany Lions pulled away near the end of the set, finding great sparks of offense throughout the game. Graduate student outside hitter Kashauna Williams scored the set-ending kill to help Penn State get the 25-19 set victory and tie the match at one set each.

Purdue found itself out to a strong start, earning itself a 9-8 lead early in the third set.

The momentum continued throughout the set, as the Boilermakers held the lead throughout much of the set. Thanks to an Emma Ellis kill, Purdue found itself with a 15-13 lead heading into a media timeout.

After a span of Purdue points, the Nittany Lions went on a 3-0 scoring run to put themselves back in the set, finding themselves down just 22-21.

The Nittany Lions put all the noise to rest, ending the third set on a 3-0 scoring run. Considering this run, Penn State found itself up 2-1 in the match thanks to a 27-25 set victory.

Penn State looked to end the match, going into the fourth set with a 2-1 lead. However, midway through the set, the Nittany Lions found themselves trailing 10-9 after a Purdue kill.

The Nittany Lions looked to deliver after their early set lead, and they did. After finding itself up 19-15 in the fourth set, Penn State never looked back, ending the set 25-19, earning the 3-1 match victory against Purdue.

With the Purdue faithful draped in black for the annual blackout game at Holloway Gymnasium, they came dressed for a funeral as Penn State ups…

Mike White is a women's volleyball reporter for The Daily Collegian.