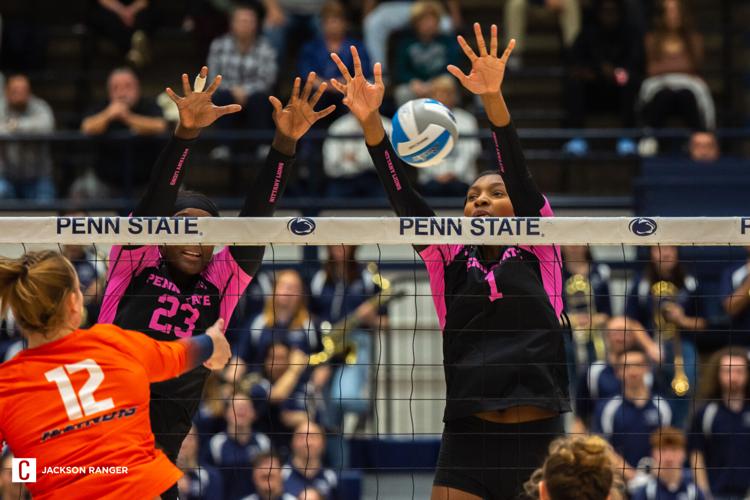 Outside Hitter Kashuana Williams (23), left, and Middle Blocker Taylor Trammell (1), right, leap into the air to block a spike from an Illinois player during the women's volleyball game on Sunday, Oct. 9, 2022 in University Park, Pa. The Nittany Lions won 3-0. 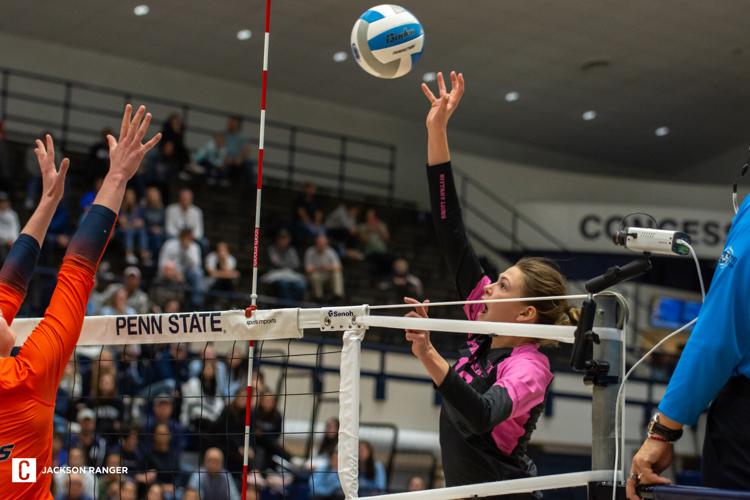 Outside Hitter Alexa Markley (19) leaps into the air to spike the ball during the women's volleyball game against Illinois on Sunday, Oct. 9, 2022 in University Park, Pa. The Nittany Lions won 3-0.

November is sweet for No. 14 Penn State thus far, riding a four-game winning streak after coming off of back-to-back conference wins.

With four conference games remaining, the Nittany Lions are roaring with positive momentum before taking on two top-10 opponents this week, No. 9 Minnesota at 8:30 p.m. on Friday and No. 3 Wisconsin at 8 p.m. on Saturday.

After a dominant 3-0 performance at Bloomington, Indiana, the blue and white silenced the annual blackout game at Purdue in a 3-1 upset, beating its first ranked conference opponent this season.

The Nittany Lions’ offense was firing on all cylinders this past weekend. Graduate student outside hitter Kashauna Williams dominated the net battle with 22 kills against the Boilermakers, powering the engine for the blue and white.

Although it’s Williams’ first year with the program, the fifth-year veteran has shown her leadership and consistency, racking up a team-high 314 kills on the season, which is tied for eighth in the conference.

“Kashauna is a special player, and she hits a heavy ball and is quick off the floor,” coach Katie Schumacher-Cawley said. “I hope her Saturday night's performance carries over to the rest of the season.”

Freshman outside hitter Alexa Markley also has been phenomenal, tallying 13 kills in the victory over Purdue. On Nov. 14, Markley won her first conference weekly honor as a

true freshman. She praised her teammates for being supportive and developing her confidence throughout the season.

“Yeah, obviously more experience makes me more comfortable, but again, my teammates have been such a big part of that,” Markley said. “Just everyone is, like, welcoming of other people.”

Holding a rally with tight cohesion will certainly strengthen the Nittany Lions as they look forward to potential upsets against two top-tier programs.

Looking at No. 9 Minnesota, this is a young squad with talented players.

Just like the Nittany Lions, the Golden Gophers will enter Rec Hall with a four-game winning streak. Minnesota is looking to improve on a 17-7 overall record this season.

The Golden Gophers sit fourth in the Big Ten, a spot ahead of Penn State. Both teams will eagerly fight for the victory to move up the standings.

Minnesota has a couple of prolific threats on offense. This young corps is led by junior setter Melani Shaffmaster, who’s taken the helm of the Golden Gophers’ offense since freshman year. Shaffmaster, a ​​three-time Big Ten Setter of the Week, led the team with 10.45 assists per set, ranking second in the Big Ten.

Shaffmaster has some talented weapons around her as one of the best passers in the conference. Her favorite target will be redshirt-sophomore outside hitter Taylor Landfair, who ranks fourth in the conference with 428 points and first with 4.44 kills per set.

During the four consecutive conference wins, Landfair was consistently productive and tallied a total of 58 kills.

This dangerous combo should be a significant threat for Penn State’s defense, so it’ll need to be strong at the net to match this firepower.

The Golden Gophers’ defense has only allowed a .178 hitting percentage this season, with freshman middle blocker Carter Booth leading the team with 98 blocks.

Penn State fell to Wisconsin on the road back on Sept. 30, as the Badgers dominated the first two sets before barely holding on the final set, 31-29, to give the blue and white its second loss of the season.

Now back to Rec Hall, the Nittany Lions will look to avenge that defeat against No. 3 Wisconsin, the top team in the Big Ten thus far.

Under coach Kelly Sheffield, Wisconsin won the national title in 2021. Coming off of a 21-3 overall record, the defending national champions are rolling on a 14-game winning streak and looking to reach the peak again this season.

The Badgers are stacked with loaded talents on both sides of the ball. They lead the conference with a .267 hitting percentage on offense, dominating their kill battle, 1,138-977. Redshirt-sophomore outside hitter Sarah Franklin leads the team with 314 kills, ranking eighth in the Big Ten.

Wisconsin is one of the conference's best serving teams, with four players contributing over 20 aces. The Badgers have 150 aces in total, which sits fourth in the Big Ten.

On defense, Wisconsin has shown a stoic net presence with two talented middle blockers, Danielle Hart and Caroline Crawford, who have both racked up over 100 blocks on the season.

The Badgers have stifled their opponents all year, allowing only a .154 opponent hitting percentage. In their initial meeting, the team’s defense haunted the Nittany Lions with a .136 hitting percentage. Penn State must improve its efficiency to pull off an upset.

“Obviously we have two tough matches this weekend, but you know, with four matches left, it's pretty wild,” Schumacher-Cawley said. “I think we need to get better and continue to work on the things that need improvement.”

While being recognized as hosting some of the best collegiate talent in America, Penn State …