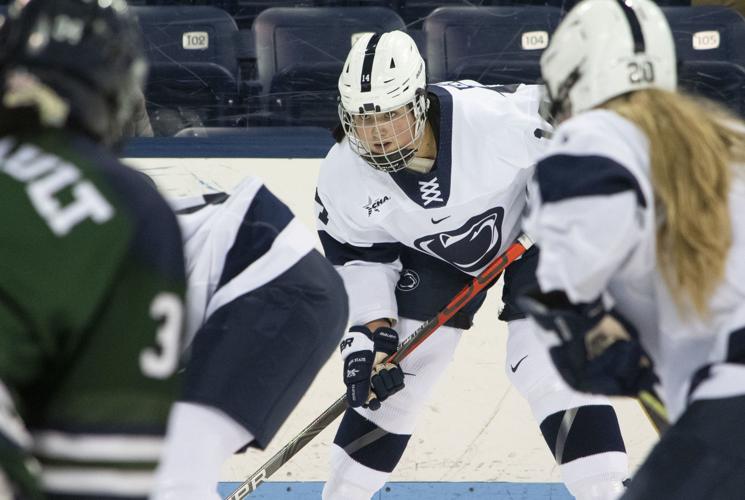 Forward Julie Gough (14) waits for the puck to drop during a face off during the women’s hockey game against Mercyhurst at Pegula Ice Arena on Friday, Feb. 28, 2020. Mercyhurst defeated Penn State 3-0. 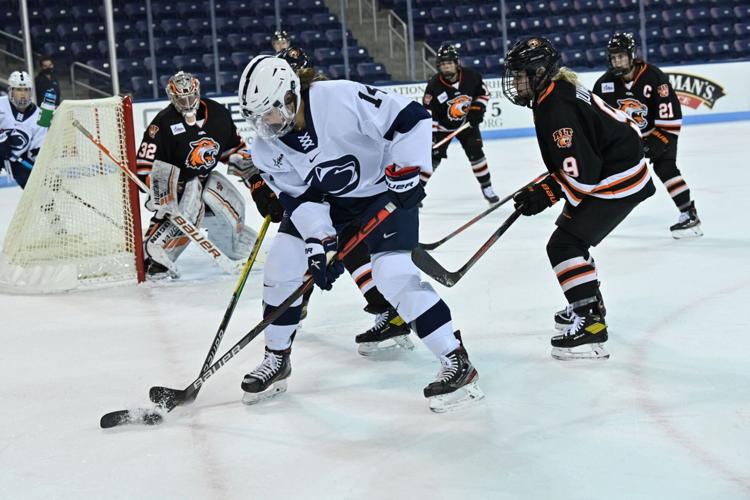 Sophomore forward Julie Gough controls the puck in front of a backdrop of RIT defenders in an eventual 2-0 victory for Penn State women's hockey on Feb. 9, 2021.

Within Penn State’s rollercoaster of a game against Brown, it saw another forward step in a huge game for the team.

Senior forward Julie Gough came away with a two-goal performance, one being the eventual game-winner in the Nittany Lions 4-2 win against the Bears.

After coming out in the game firing shots, Penn State’s offense struggled to find the back of the net — missing over a dozen shots before Gough landed the first score of the game on a power-play possession.

Coach Jeff Kampersal talked all about energy and finding good scoring opportunities leading up to the contest, and Gough’s first score came from both of those factors.

The Newcastle, Ontario, native tallied her fifth and sixth goals of the season on Monday and has accounted for the fourth most on the team thus far this campaign, but she has made other contributions besides scoring.

Kampersal called Gough a “smart” player on those penalty transitions, and said the little passes and plays she routinely makes on power plays and penalty kills has been “awesome” for the team.

Power-play opportunities have been one of the constant factors for this squad in games, as the Nittany Lions have gone 11-for-54 on those plays this season, improving since the 18-for-102 record it saw in those opportunities last season.

Gough gave her teammates credit for power-play success, and said it’s been “cool” to be able to do her thing in the middle while they make plays from the wing positions during those transitions.

Kampersal said Gough did a good job of getting in a good position for shots this game, saying her first was “a big goal” off of accurate shots that she’s always been good at getting.

Gough’s goal to make the lead 1-0 quickly turned into 2-0 off of junior forward Olivia Wallin’s shot later in the first period, although, scoring ramped up in the third period after that.

Gough talked about keeping an aggressive mentality through stretches without scoring, and said the team’s mentality of looking to the net first has been contagious.

“When they’re pushing at us hard it’s obviously harder to get pucks on the net, but that’s our priority.” Gough said about how Brown affected the offense after the first period.

The Bears looked to capitalize with two unanswered goals during the third period, and quickly tied the game at 2-2 with a few minutes remaining. It took Gough’s goal in the final minute of action to push the offense ahead after stalling in the second period.

The senior forward hit a big shot off of the pass from freshman forward Kendall Butze, and described what went into the successful game-winner.

“I honestly thought she was going to take it herself, she didn’t but I was there. I was calling for the puck, and we have a lot of chemistry off the ice,” so when Butze passed to her Gough was ready for it.

After facing adversity early in Period 3, such an exciting finish has a chance to carry on into the Nov. 18 matchup with No. 6 Yale, and Kampersal also said that overcoming adversity was good to see from the squad ahead of its next matchup.

“This is a short week, but [we’ll] take tomorrow to rest, and come back Wednesday, hit the ice hard and then be prepared for Yale. It’s gonna be a tough game as well,” Gough said after the win.

Zavier Gussett is a sports reporter for The Daily Collegian. He is currently a junior majoring in broadcast journalism, with a minor in corporate communications.