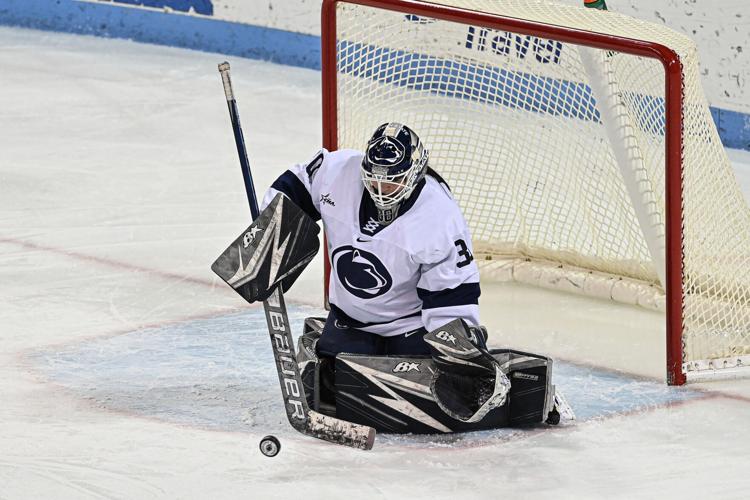 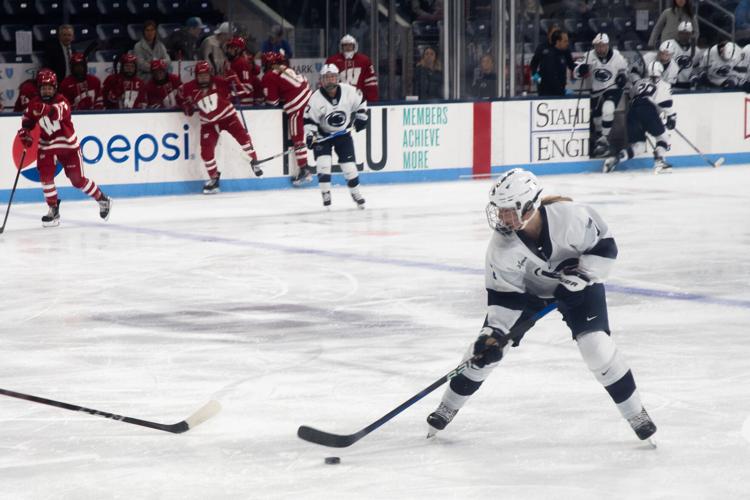 A player from the Penn State Women's Hockey Team guides the puck across the ice on Thursday, Sept. 22, 2022. Penn State defeated Wisconsin 4-1 at Pegula Ice Arena in University Park, Pa.

After Thursday night’s upset victory, Penn State missed an opportunity to show that they belong among the top hockey squads in Friday’s rematch with Wisconsin.

After starting 1-0 on the season Penn State faced off with the Badgers again on Friday night, in a match that would dictate early season expectations for both groups.

The result was a Wisconsin win that ended with a score of 9-1. Instead of sweeping the season-opening series, Penn State allowed Wisconsin to get its first win of the season.

Wisconsin began the match with a clear game plan to spread the puck around early, after being held to one point in the opener.

The Nittany Lions, on the other hand, made sure their physicality carried over into a game that was chippy from the very start. Both team’s aggressive play could be seen early as many players were pushed against the walls and ice throughout a competitive game.

“We don’t mind physicality, I think we’re still in a position of working on conditioning and things like that… when you play a program like Wisconsin you’re always facing [physicality],” said coach Jeff Kampersal.

Junior forward Kiara Zanon added “I think we’re a very physical team as well, and obviously they kind of came out a lot stronger tonight.”

The Badgers shot early and often again, outshooting the blue and white 13-8 during the first period. Penn State was unable to take advantage of its first two power play chances in the first period, as the period ended at a scoreless tie.

After a back and forth start to the first period without any points, Kiara Zanon scored with a quick goal on the next power play to start the second period for the Nittany Lions. She gave a much-needed second effort to get the score, as was the case all night against a stout defense.

“Our coach really talks about [second efforts], it’s one of our core values so I think everyone on the team [gives] a second effort and that’s what we need from everyone.”

With the Nittany Lions on the board first tonight, the defense had its job cut out for them after not allowing a score after the first period on Thursday.

However, Wisconsin then made sure to take advantage of shots in the second period beginning with junior forward Casey O’Brien scoring midway through the period to even up the score.

The Badgers took its first lead of the night with a second goal with 6:45 left in the period, before another just over three minutes later scored by sophomore forward Lacey Eden to increase the lead to 3-1 with just the third period to go.

Wisconsin continued the high-pace offense with a fourth score in the third period.

Senior goalie Josie Bothun was crucial for the Nittany Lions in the first win, but struggled keeping up with Wisconsin’s big run on shots tonight.

“If you run offense three feet by the blue line, you gotta get it in, if you're on defense [within] three feet, you’ve got to get it out,” Kampersal said. “We lost the three-foot battles tonight so that’s something we’ll try to improve.”

Wisconsin put up 33 shots through the second and third periods, compared to Penn State’s 15.

The Badgers used those extra shot attempts to increase the lead out of reach early in the third period, scoring six goals in the process to bring the final score to 9-1.

Penn State’s season opening series certainly gave hope for another successful season, so building on the performances will be the key to winning in the future.

“The scoreboard shows differently but to me it was kind of a 3-1 game so we’ll just focus on the little areas,” said Kampersal.

Penn State will travel to New York on Friday, Sept. 30 to face the Minnesota Duluth in its next nonconference battle.

Kampersal added the team’s goal is to “flush this loss today and take the lessons” it brought. “Our players had a lot of grit and didn’t give up so that’s a positive.”

Penn State was ranked 14th in the preseason USCHO poll, and it had a chance to prove that it…

After No. 14 Penn State made history Thursday night, capturing its first win over a top five opponent, the following contest was a different story.