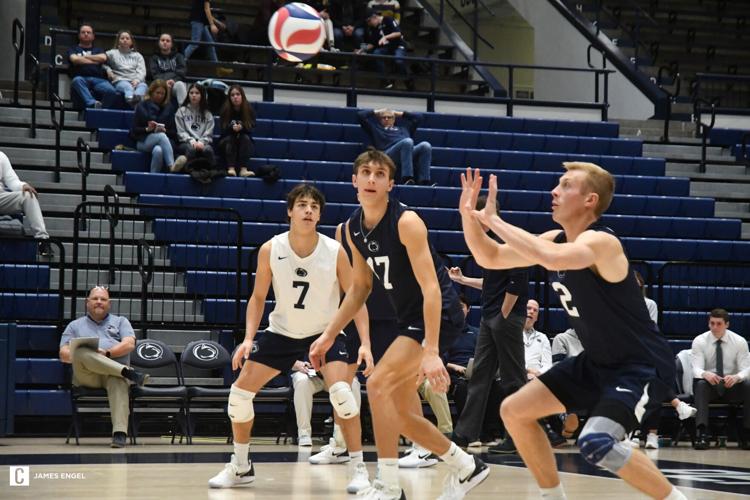 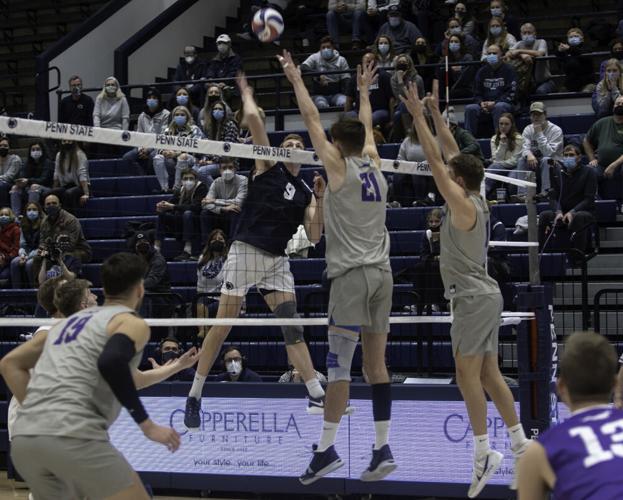 Penn State opposite hitter John Kerr (9) goes to spike the ball during the Penn State men's volleyball game against Grand Canyon University in the Rec Hall on Saturday, Jan. 15, 2021 in University Park, Pa.  The Nittany Lions defeated the Antelope’s 3-0.

The first match of the First Point Collegiate Challenge resulted in a 3-1 victory for Penn State.

With the Nittany Lions being ranked No. 4 in the AVCA and the Waves at No. 5, this match was set to be a close competition.

Coach Mark Pavlik was looking forward to this challenge due to the strength of the opposing teams.

“What better way to celebrate [boy’s and men’s volleyball] than playing against [Pepperdine] and Stanford, y’know?,” Pavlik said. “Two longtime established powers in the world of collegiate men’s volleyball.”

The matchup began with points going hand in hand for the two teams; when one team would start to pick up the pace and gain two points on the opposing team, the opponent would then follow suit and bring those points back.

Senior opposite hitter John Kerr earned five kills by the first timeout of the game, along with Pepperdine graduate student outside hitter Jaylen Jasper, who was a strong competitor against the blue and white.

The service errors continued to mount for both teams as the first set continued.

However, when Penn State was attempting to hit the ball over the net during rallies, the offense brought immense strength through its centers and outside hitters.

The end of the set was a nail-biter, with neither team holding an immense advantage over the other. The energy of the set was electric by the last few points.

The Waves had set point, up 24-22, so the odds were not in the Nittany Lions’ favor.

Thanks to a kill by junior middle blocker Toby Ezeonu, Pepperdine was no longer fighting for the set point and tied up the game. An ace served by junior outside hitter Michal Kowal then brought the score to 24-25.

In the end, the blue and white bounced back and won the first set due to an attack error made by Pepperdine’s junior middle blocker Andersen Fuller.

Going into the second set, Penn State carried on the momentum and was able to maintain a decent lead for the majority of the set before the first timeout.

The overall energy of the Nittany Lions was remarkable during this set, making it clear that they wanted this win for their first matchup of the challenge.

After the first timeout, the blue and white continued to further this gap, with it nearly doubling the Waves’ score at one point.

By the end of the second set, Penn State won 25-18 with a kill from sophomore middle blocker Owen Rose.

Pepperdine began to show more gusto once the third set commenced. The scoring became comparative to the first set, which made the match more exhilarating.

It was clear that the Waves’ tactic evolved into forcing the Nittany Lions to move further away from the net with their stronger hits. This ended up working in their favor as the set continued and they were able to consistently stay at least one point ahead of the blue and white.

In turn with Pepperdine’s energy, it seemed that Penn State’s energy was starting to dwindle.

When Pepperdine was racking up points, however, Penn State was doing the same, just at a slower rate. By the last timeout of the set, the score was 23-19 with the Waves in the lead.

At the end of that set, Pepperdine had won its first. While the Nittany Lions didn’t necessarily have a bad set, because the scores were still comparable, the blue and white did not compare to the power the Waves brought to the table.

Penn State came back with a vengeance at the beginning of the fourth set with an early advantage of a three-point-lead.

While the Nittany Lions maintained their lead, both teams were bringing their fiercest competition. There were several high-intensity rallies as the blue and white fought for the win.

As the set progressed, Pepperdine’s strength began to fall apart. With strong offense and defense on both sides, Penn State’s blocker and hitters were coming together to deflect any attacks the Waves were attempting.

The Nittany Lions finished out the set with this reinstated vigor beating Pepperdine by 10 points. While Pepperdine had brought an attack that wasn’t truly seen until the third set, they had lost it by the final set.

Overall, this was a difficult competition for both Pepperdine and Penn State. The stats amongst both teams were fairly equivalent throughout the match, with the Nittany Lions having slightly more kills compared to the Waves.

Michal Kowal was the hitting and blocking leader of the full game and John Kerr was the player of the match and kill leader for Penn State at 20, trailing behind Pepperdine’s Jaylen Jasper by one.

The blue and white will be facing off against No. 8 Stanford on Saturday as the First Point Collegiate Challenge comes to a close.

After a weekend that saw two wins over first-time opponents for Penn State, the team will he…

On their first night of the First Point Collegiate Tournament, both teams came away with a four-set victory against a ranked opponent.

Shannon Tanczos is a men's volleyball reporter for The Daily Collegian. She is a junior majoring in broadcast journalism with a minor in sports studies.