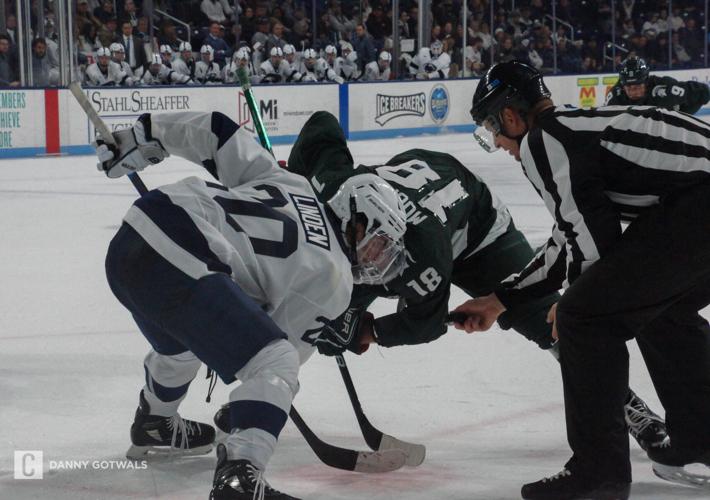 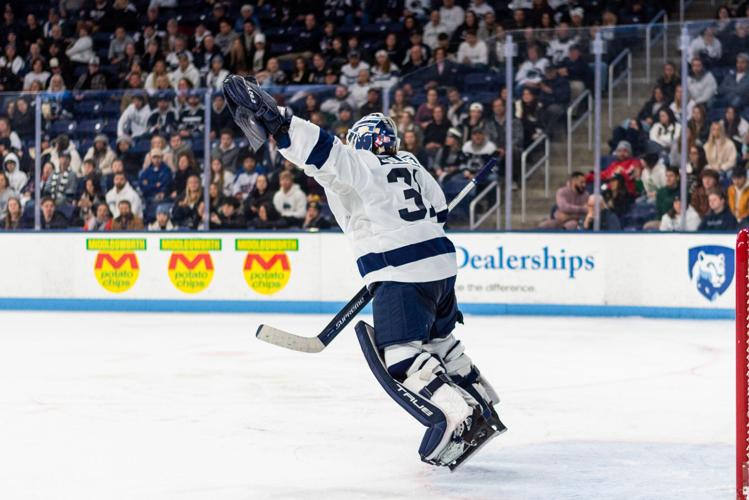 No. 6 Penn State’s return to Pegula Ice Arena in front of a record-setting crowd was a frustrating one.

Following a tough series opposite Michigan State out seven days earlier, the Nittany Lions suffered a narrow 2-1 defeat at the hands of Notre Dame.

Penn State began the game storming the gates of the Fighting Irish’s defensive zone. The blue and white’s offensive attack generated eight shots on goal across the first seven minutes of action, with Notre Dame only firing off a single shot during that time.

However, the Fighting Irish’s senior goaltender Ryan Bischel proved that he wasn’t going to fold at the first sign of pressure. He managed to hold Penn State scoreless for the first 19 minutes of action.

Bischel’s clean record was soon scratched when sophomore forward Danny Dzhaniyev scored his fourth goal of the season, sailing the puck past the Notre Dame goaltender after it rebounded off the goalpost.

“His growth has been more mental than physical, he’s a powerful athlete,” Guy Gadowsky said of him. “When you give him direction, he will really, really work at it. And he has worked hard.”

Dzhaniyev’s score added method to Penn State’s offensive madness in the first. The Nittany Lions took the fight to a Notre Dame team known for its defensive toughness, out-shooting the Fighting Irish by a significant 20-6 margin.

As the middle frame began, the blue and white continued to mostly dictate the pace on the ice, but that didn’t stop Notre Dame from tying the contest.

Graduate student Chayse Primeau snuck behind Penn State goalie Liam Souliere and scored on his blind side, knotting things at one apiece.

From there, as the action stalled, the pair of Big Ten rivals reverted back to styles they were comfortable with.

Penn State kept searching for all the offensive looks it could find, while Notre Dame chose to get comfortable in its defensive zone, trying to benefit on any mistakes the Nittany Lion offense might make.

Ultimately, neither squad’s approaches yielded any more scores as the second period concluded. Senior forward Tyler Gratton said the blue and white’s inability to totally capitalize offensively stemmed from struggles to follow through.

“We’ve got to follow up the rebound to get the second, third opportunities,” Gratton said. “It’s not always the first shot that goes in most of the time.”

Notre Dame nearly took the lead with under 60 seconds before the intermission, but a diving effort into the crease from team captain Paul DeNaples prevented a go-ahead goal.

As the final stretch got underway, Notre Dame was able to swiftly take the lead just under three minutes into the period after a powerplay goal from junior Ryder Rolston.

From there, the pace of the game became more frantic. Penn State attempted to mount a comeback for the entire duration of the third period, eventually finishing with 53 shot attempts across the game.

Yet none of these looks found the back of the net. As desperation kicked in, Guy Gadowsky resorted to emptying the net late to no avail. Ultimately, the Fighting Irish held on for a 2-1 win, their second victory over Penn State this season.

Gratton reflected on the high-volume offensive performance, saying that, even in defeat, the number of chances Penn State created were high-quality.

“They do a really good job blocking shots, but to still be able to get 54 shots on-net was incredible,” Gratton said. “Give their goalie credit, Bischel made some unbelievable saves.”

Following this defeat, the Nittany Lions will now look to bounce back on Saturday during the annual Wear White Game. Heading into that battle, Gadowsky struck a similar tone to Gratton, expressing confidence in his team’s performance.

“I would take that game every night,” Gadowsky said. “I thought the team generated a lot of really good chances, and the puck didn’t go as much as we liked.” 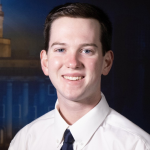