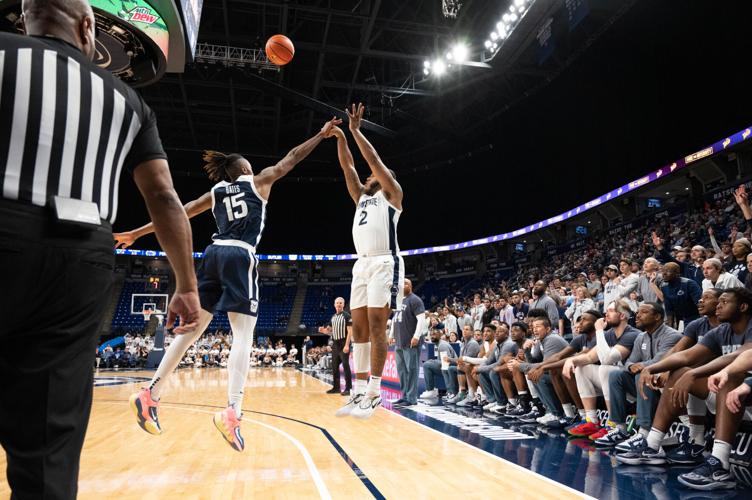 Guard/Forward Myles Dread (2) shoots the ball during the Penn State men’s basketball game against Butler at the Bryce Jordan Center on Monday, Nov. 14, 2022 in University Park, Pa. The Nittany Lions beat the Bulldogs 68-62. 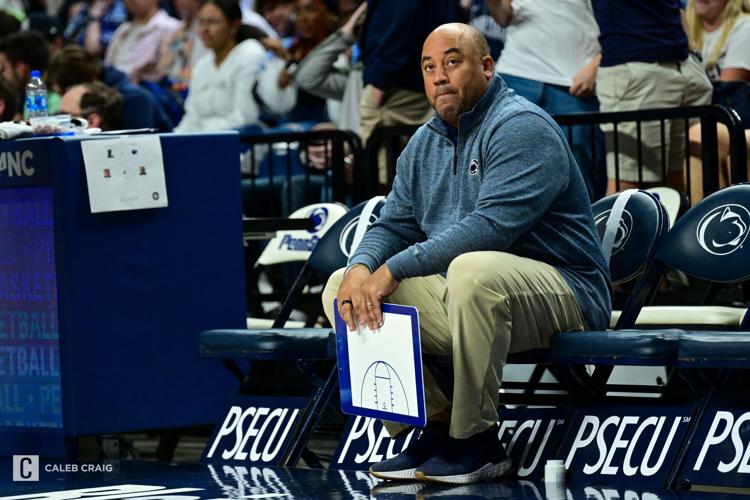 In a battle over 10 years in the making, Pennsylvania bragging rights are on the line as Penn State carries its best start to a season in three years into a fight against Lafayette.

The Nittany Lions and Leopards will face off at 7 p.m. on Friday in Happy Valley.

After a strong 2-1 weekend at the Charleston Classic, the Nittany Lions sit at 5-1 overall record. With a KenPom ranking of 31 the blue and white currently sit ahead of programs like Villanova, Michigan and Wisconsin.

Penn State continues to shoot the ball from beyond the arc with the nation's best, ranking third in 3-pointers per game with 12.5 and 14th in 3-point percentage with a 42.37% mark. Fifth-year senior guard Myles Dread leads the charge for the blue and white, sitting 24th in the country from behind the arc.

With experience and veteran leadership at the forefront, taking care of the basketball has been a strong suit for Micah Shrewsberry’s squad. The blue and white ranks 18th nationally in assist to turnover ratio and is tied for 19th in fewest turnovers surrendered per game.

Freshman guard Evan Mahaffey played in all three games in Charleston and put his stamp on the tournament in Penn State’s two-point loss to Virginia Tech. Mahaffey was active defensively in his 16 minutes, grabbing five rebounds and creating headaches for the Hokies during the Nittany Lions’ comeback.

“He's not gonna be scared, he’s not gonna be scared of the moment,” Shrewsberry said during his most recent media availability. “So you can throw him out there and see what he's going to do because he has the ability to make some plays that — just frankly — other people can't make just because they haven't been blessed with the wingspan or athleticism that he has.”

Following the three games in four days, the attention for Shrewsberry and his team now shifts to Lafayette, a program that’s struggled in the early part of the season, currently holding a Kenpom ranking of 304 out of 363 teams.

Through the first six games of the season, Penn State’s identity on the floor is clear: use strong, physical defense to push the ball in transition and create for the shooters. While Shrewsberry recognized the Leopards will be ready for that, the approach remains the same.

“I think that's gonna continue to be a growth process for us,” Shrewsberry said. “Knowing this is who we are, this is who we want to be and let's continue to play to our style. When people allow us to play that way, we're really hard to guard and we're really hard to deal with. Now, we gotta be the same exact way when they don't allow us to do that.”

When Lafayette comes to the Bryce Jordan Center on Friday night, the Nittany Lions will be looking for revenge after dropping the last matchup between the two in 2011. The all-time series between the squads dates back to 1916, with the blue and white holding a 12-4 advantage over Lafayette, who boasts a 1-5 record to start the 2022-2023 campaign.

Despite being picked to finish last in the Patriot League, Lafayette’s first-year coach Mike Jordan brings NBA and overseas experience to a program that has not been to the NCAA Tournament since 2015. Jordan takes over for longtime headman Fran O’Hanlon, who led the Leopards for 27 consecutive seasons.

Even though Lafayette features four players averaging 10-plus points, the unit’s scoring woes have been the story through its first six games, as it’s failed to reach 70 points thus far.

The Leopards, similar to the blue and white, like to shoot the 3-pointer, tying for 32nd and 17th in the nation in long balls made and attempted per game, respectively. Senior forward Leo O’Boyle drives the offense for Lafayette, leading the team with 13.5 points per game while ranking second on the squad with 13 assists.

Sitting third behind junior guard Jon Brantley, who scored 13 points in his season debut in the Leopards’ last game against Penn, junior forward Kyle Jenkins averages 12.5 points and 5.3 rebounds, a mark that paces the team.

The Nittany Lions will also be tasked with slowing down one of the nation's best passers. Sophomore guard CJ Fulton has 32 total assists, which ties the Belfast, Ireland, native for 18th in the country.

With Fulton dishing and diming, Penn State’s perimeter defense will need to be ready to go against a Lafayette team that likes to generate its offense from beyond the arc.

Knocked out of the winner’s bracket on Friday, Penn State finished the Charleston Classic on…