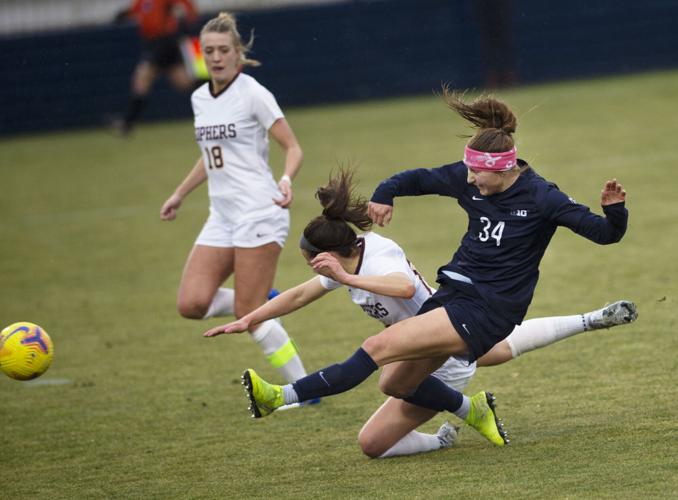 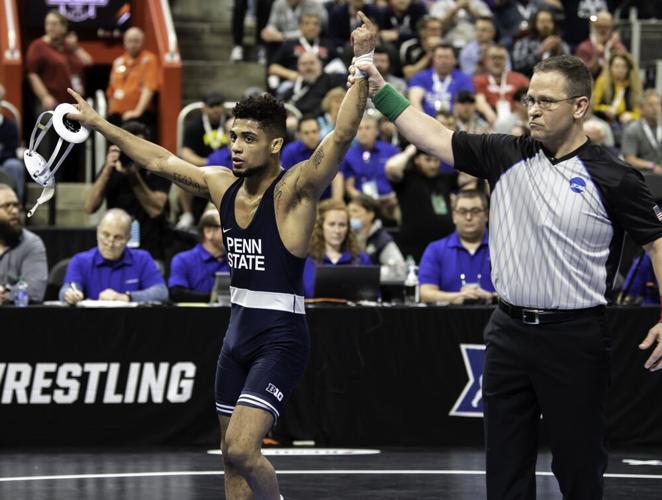 Penn State's Roman Bravo-Young is pronounced victor after facing Iowa's Austin DeSanto during the semi-finals of the NCAA Wrestling Championship.  Bravo-Young defeated DeSanto 3-2, advancing him to the finals. 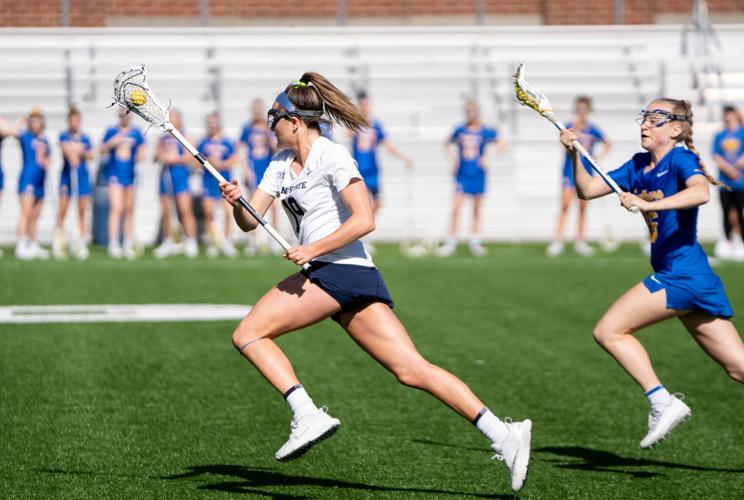 Penn State's Kristin O'Neill (19) carries the ball up the field during Penn State's game against Pitt at Panzer Stadium in University Park, Pa. on Tuesday, Apr. 12, 2022. The Nittany Lions defeated the Panthers 15-7.

Penn State athletes are at the top of their game, representing one of the most competitive in the Big Ten conference. Many of these athletes further their athletic careers in professional leagues after college.

However, these Nittany Lions could have success as professional wrestlers for WWE, if they gave it a try.

Brenton Strange, a 6-foot-3 tight end, is a dominant force on the field and would be an even bigger threat in a confined wrestling ring.

Weighing in at 247 pounds, Strange is a big body for the Nittany Lions’ offense. Despite being a pass catcher, James Franklin often uses him as a blocker, clearing paths for running backs such as Nick Singleton.

Strange is a key component as a team player, so imagine if he competed as an individual. If Strange changed his potential career path from the NFL to WWE, there is no doubt success would be in his future.

Previously named Penn State Athlete of the Year, Ally Schlegel is a beast for women’s soccer. Schlegel leads the team in goals and recently recorded her 100th point as a Nittany Lion.

The Parker, Colorado, native led the Big Ten in goals in her redshirt sophomore season, and she was named Big Ten Forward of the Year.

Schlegel is a highly decorated player on the pitch, and her speed and aggression would translate well in the world of pro wrestling.

Not to mention the iconic pink headband Schlegel wears in every game. Her onfield personality would make her a fan favorite if she turned to the WWE.

Hockey goalie Liam Souliere would also prosper if he were to switch from the ice to the mat. Because Souliere plays such a fast-paced sport, he would be an excellent wrestling candidate.

Souliere, as a collegiate hockey goalie, faces high-speed shots from some of the best upcoming hockey players in the country — meaning he has to stay focused and be agile on the ice.

If he were to switch to pro wrestling, the skills would follow him, thus giving him a head start in preparation to take to the mat.

Kris Shakes is already a fan favorite and has a tremendous number of wins under his belt with the men’s soccer team. His strong build would make him a powerhouse in the ring.

His experience facing oncoming strikers would prepare him for an opposing wrestler charging at him. In addition, Shakes’ keeper techniques parallel the tackling in pro wrestling, which would give him a leg up when he transitions from the field to the mat.

This scrappy midfielder led her team with 51 points in all 15 games she started in, while also being named Big Ten Freshman of the Year.

Even early on in her career, O’Neill was a standout, showing a promising future if she were to switch sports.

Her energy on the field would be no different in a rumble match, as her speed and agility would make her a tough but entertaining opponent.

Lee has helped Penn State earn a team title multiple times in his collegiate career, while losing just 14 of 136 matchups in his career.

His experience would translate perfectly, and his multiple NCAA Championships would make him a hefty threat in the ring. If Lee turned pro, his possibilities of success would be endless.

The 5-foot-11 Lady Lion basketball star would be a force as an all-star wrestler.

Makenna Marisa’s aggression on the court would be no different in the ring — blocking a basketball is no different than pinning a competitor.

Marisa is an all-time leader at Penn State and is a team player. It’d be no surprise if she won a championship with tag-team partner Anna Camden.

The Penn State Male Athlete of the Year and 2021 NCAA Champion would undoubtedly be victorious as a WWE wrestler.

Opponents struggle against him now and would continue to do so at the professional level.

The 6-foot-4, 190-pound attackman would be an excellent pro wrestler, solely based on his size.

Michael Faraone is one of the biggest players on the men’s lacrosse team and the tallest on its offense. Compared to other pro wrestlers, he would tower over those on the smaller side.

Positionally, Faraone is a forward — a position that’s not only key to the team but requires a ton of stick skill and quick foot movement. He uses these techniques to his advantage on offense, so who’s to say he wouldn’t do the same with a chair in a ring?

Faraone is also a sophomore, so his youthfulness would allow him to become a bright, new wrestler.

Sophomore gymnast Elina Vihrova was one of the most decorated athletes before coming to Penn State and has not stopped succeeding here.

The Latvia native earned All-America honors and competed in 10 meets in her first year. She also helped Penn State’s success and competed in the Big Ten Championship, earning high scores throughout the season.

Her awards on national stages as a part of the Lativa National Team would give her a distinct advantage over opponents, with little doubt she’d flip over her challengers for a pin.

After its fourth consecutive weekend split, Penn State will look to find some momentum.