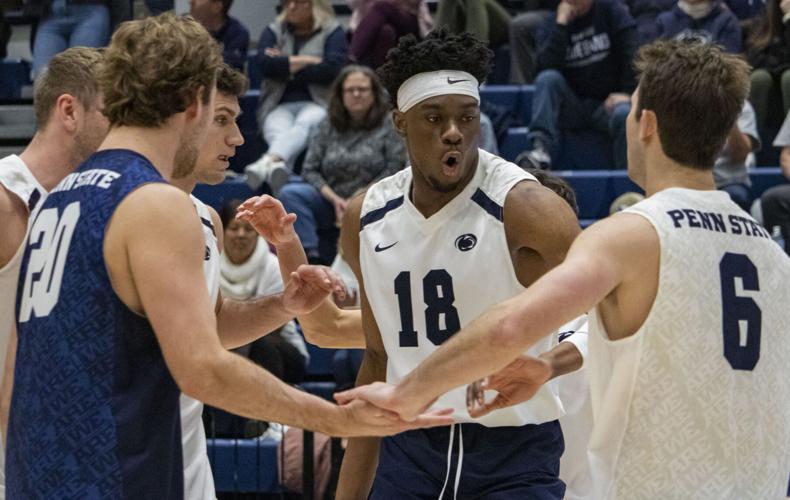 Middle blocker Toby Ezeonu (18) shakes hands with his team after performing a kill into Harvard's court in the first set of the Penn State Men's Volleyball vs Harvard match on Friday, Mar. 25, 2022 at the Rec Hall in University Park, Pa. Penn State won 3-0 against Harvard. 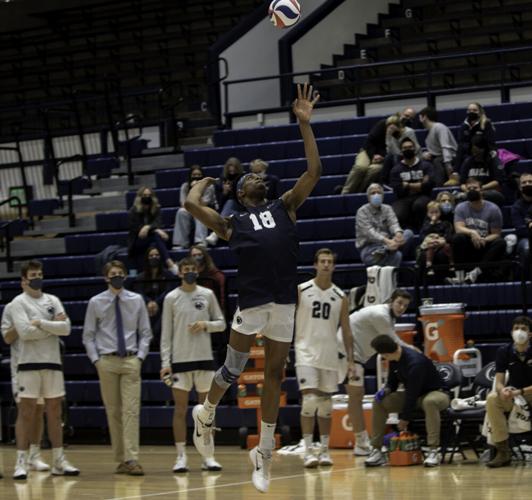 Penn State achieved its 17th and 18th wins in a row last weekend.

The Nittany Lions swept both St. Francis Brooklyn and NJIT, finishing with a perfect 13-0 record at home and continuing a 15-0 record in the EIVA.

Outside of a close 25-21 second set, Friday’s match against the Terriers was a dominant win for the blue and white on Canyon Tuman and Will Bantle’s Senior Night highlighted by Bantle’s 10 digs and Tuman’s three blocks.

Saturday night wouldn’t be the same against the Highlanders, with each set coming down to the final points.

With an improved offense from the first matchup on Feb. 26, spearheaded by a .346 hitting percentage and 40 kills, the Nittany Lions overcame 21-20 and 15-11 deficits in the first and third sets along with a close 19-18 bout in the second to put away NJIT.

With two sets coming down to the final serves against the Highlanders, coach Mark Pavlik said the perseverance the team showed is what it needs come playoff time.

“You start looking ahead, and that’s gonna kill you,” Pavlik said. “I think the more that you put yourself in those situations, the better that you stay grounded.”

Friday’s matchup against Charleston will be the Nittany Lions’ last regular-season match as they look to add win No. 19 to its streak.

The Golden Eagles come into the match with an 8-13 record and are coming off a 3-2 win over Harvard last Saturday.

While on a three-match winning streak, Charleston was in the middle of a nine-match losing streak at one point, one of those losses coming against Penn State on March 4.

The matchup in March was a 3-0 sweep for the Nittany Lions. The first and third set of the match were particularly dominant with the blue and white winning 25-14.

The story of the match was how dominant the defense was, with the unit holding the Golden Eagles to a negative .031 hitting percentage, forcing 20 attack errors and registering 11 blocks — seven of which came from Toby Ezenou.

The best of the defensive masterpiece came in the third set as Penn State held Charleston to just a negative .015 hitting percentage and forced nine attack errors.

One player from the Golden Eagles the blue and white should key in on is Garret Schnitker, who tallied five kills in the last matchup.

With how well the defensive performance was, that’s not to say the attack wasn’t just as dominant.

The attack recorded a .545 and .563 hitting percentage in the second and third frames, respectively.

Just like its defensive performance, the offensive unit shined brightest in the third set, tallying just one attack error and 10 kills to go with its high hitting percentage.

For the overall match, the blue and white recorded 39 kills, 11 coming from outside hitter Brett Wildman.

The Nittany Lions’ concern on Friday is having their attack slowed by the Golden Eagles’ Ismael Sneed and Arthur Sueur, who tallied two blocks in the last matchup.

With how well the blue and white have played during the winning streak, Pavlik said the team keeps striving for more.

“I like the way we’re headed and the things that we shored up the past couple weeks,” Pavlik said. “I like the things said, that we gotta get better at.”

For a majority of the 2022 campaign, No. 2 Penn State has become synonymous with victory — since Jan. 28, to be exact.