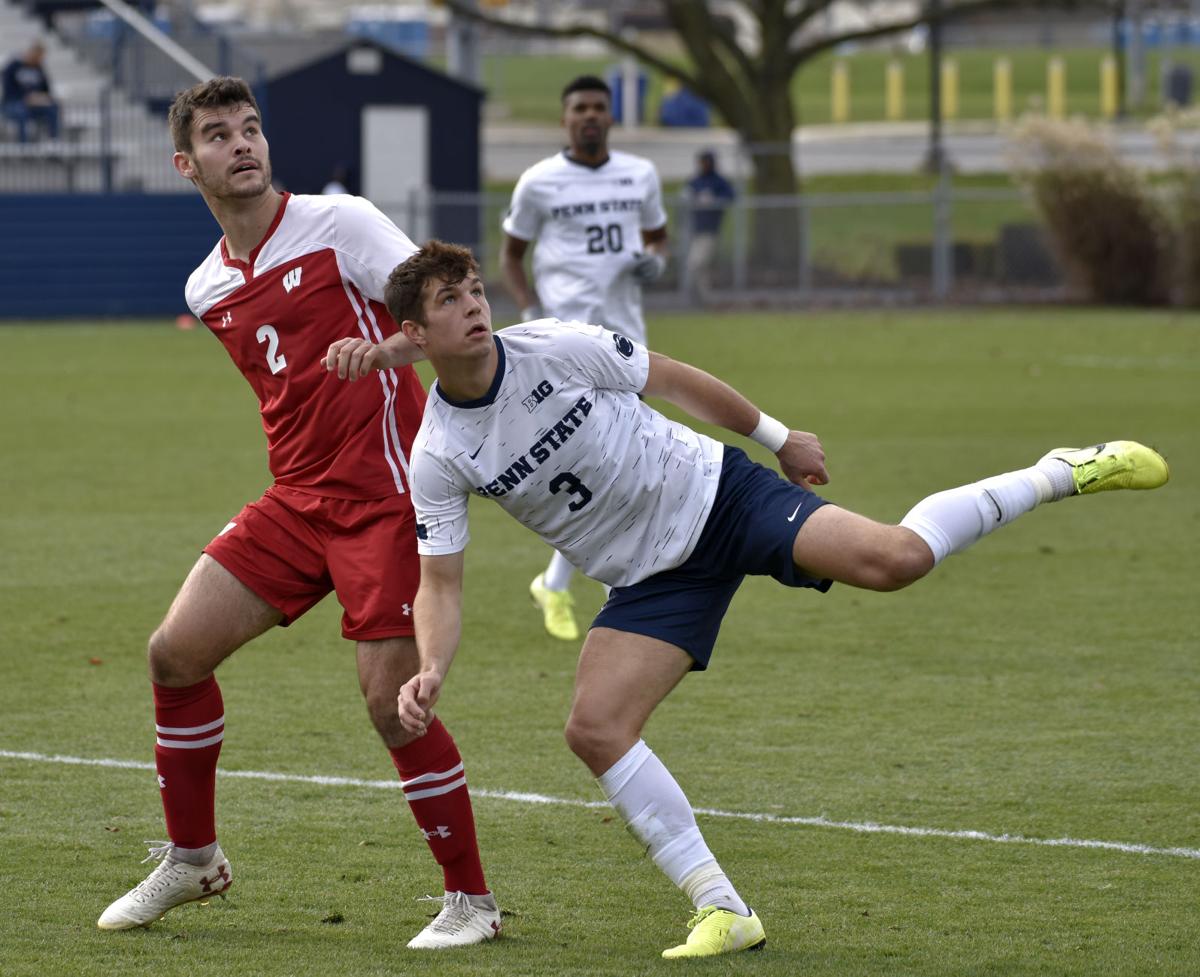 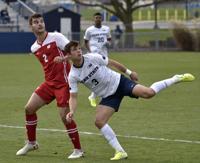 Defender Brandon Hackenberg (3) and Wisconsin defender Elan Koenig (2) looks toward the ball during the men’s soccer Big Ten Quarterfinal game against Wisconsin at Jeffery Field on Nov. 10, 2019. The No. 2 seed Nittany Lions defeated the No. 7 seed Badgers, 3-0. 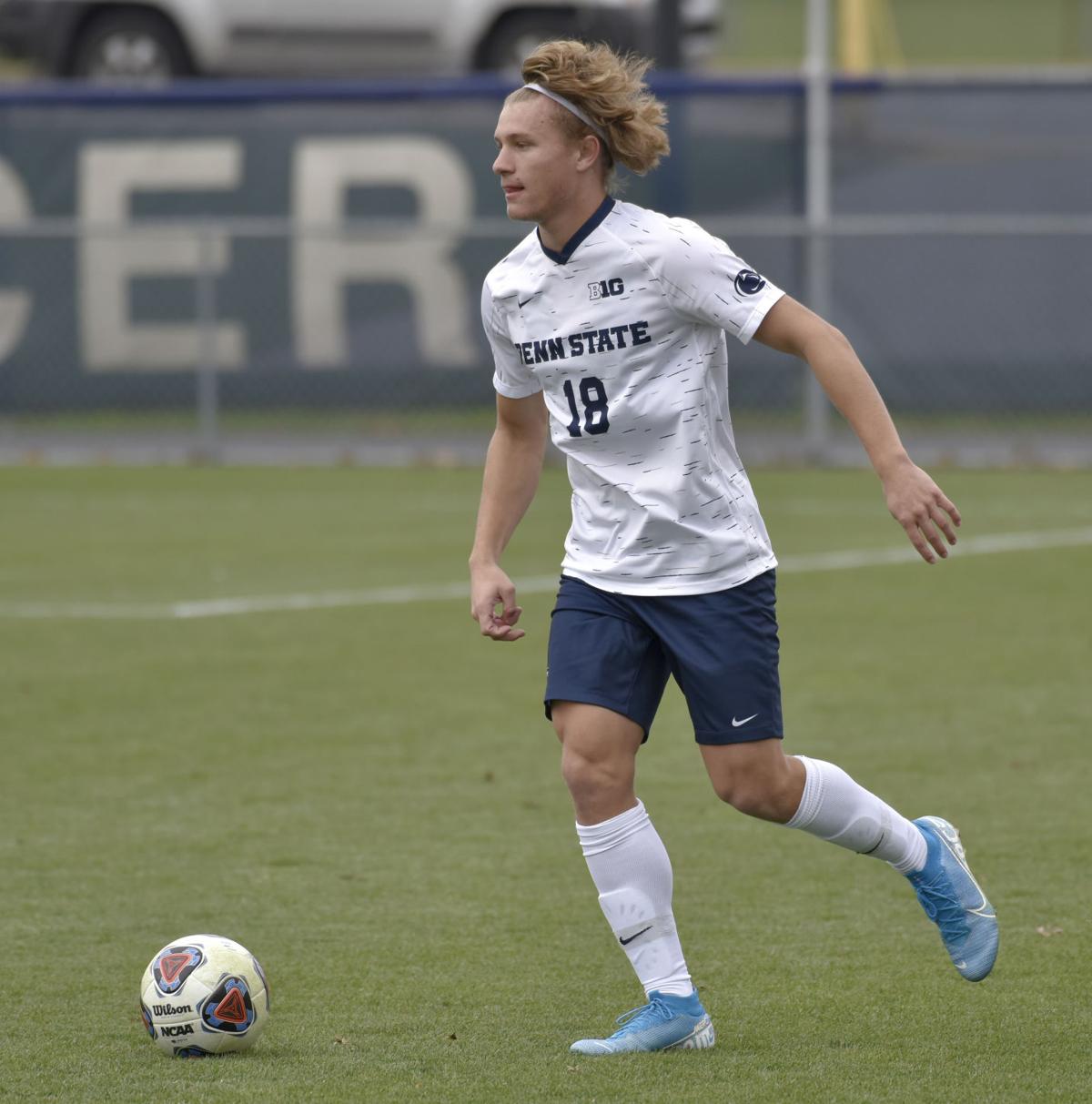 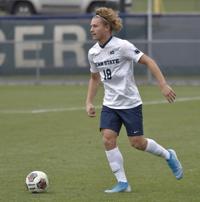 Defender Alex Stevenson (18) passes the ball to a teammate during the men’s soccer Big Ten Quarterfinal game against Wisconsin at Jeffery Field on Nov. 10, 2019. The No. 2 seed Nittany Lions defeated the No. 7 seed Badgers, 3-0. 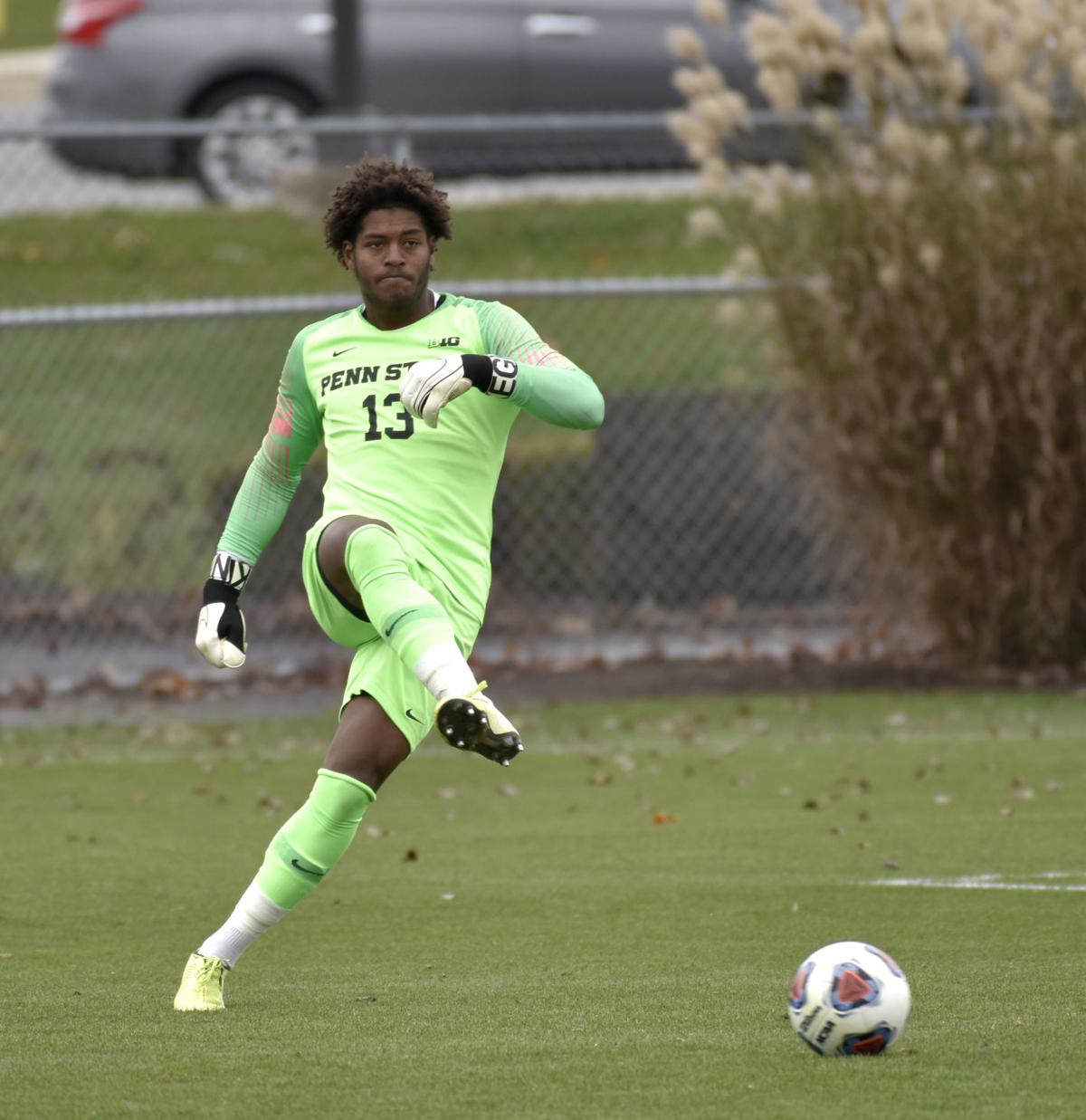 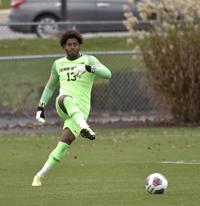 Goalkeeper Kris Shakes (13) passes the ball to a teammate during the men’s soccer Big Ten Quarterfinal game against Wisconsin at Jeffery Field on Nov. 10, 2019. The No. 2 seed Nittany Lions defeated the No. 7 seed Badgers, 3-0. 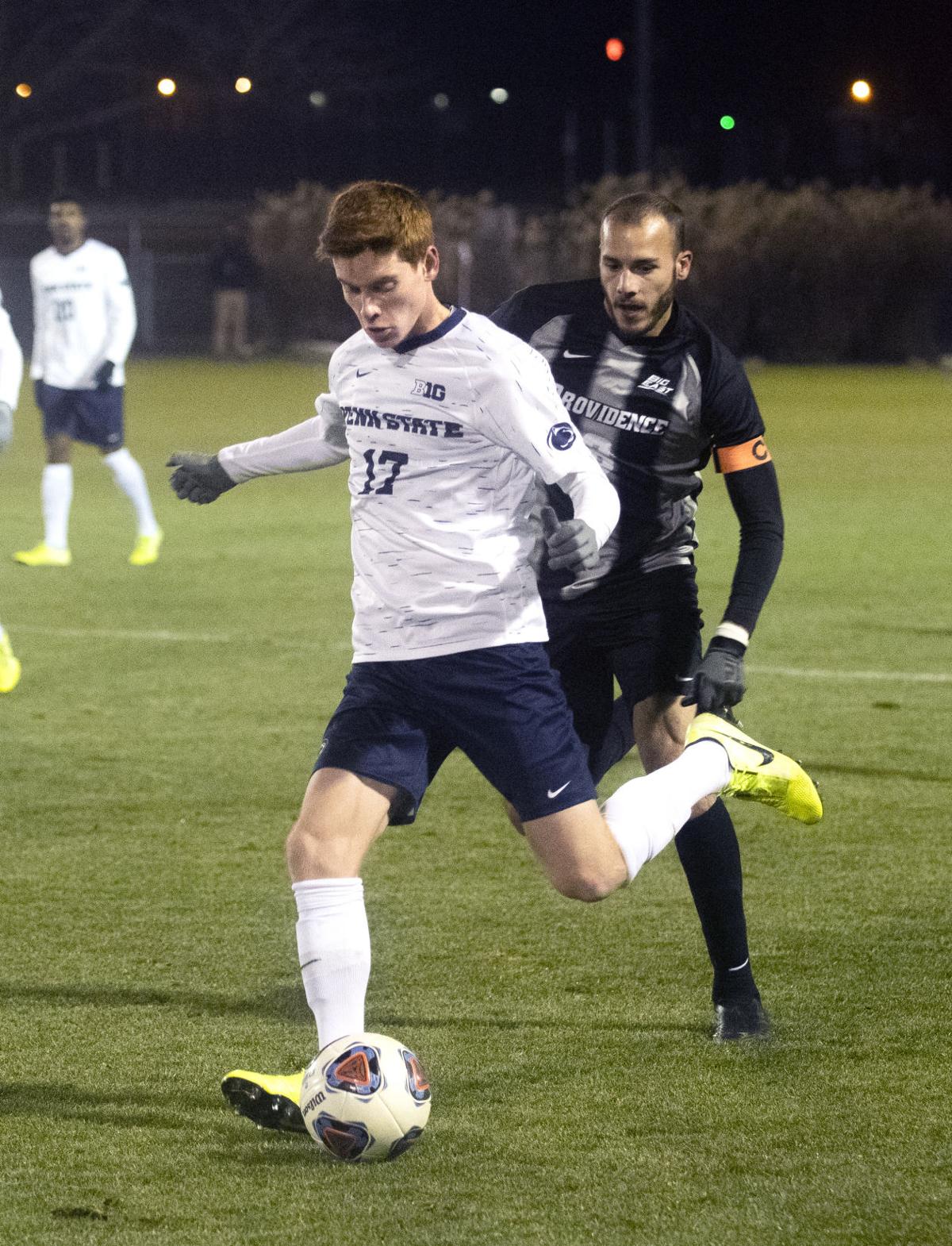 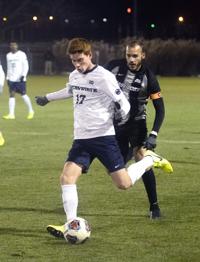 Midfielder, Seth Kuhn (17), kicks the ball during the game against Providence at Jeffrey Field on Sunday, Nov. 24, 2019. Providence defeated Penn State 3-2 during overtime.

The last time Penn State fielded a starting 11, it enjoyed a successful season on the backs of talented players at each position.

The Nittany Lions had a prosperous campaign in 2019 and finished with 12 victories with their stars contributing to the overall success of the program.

But as is the case in collegiate athletics, every season comes with new players and losses of key members of the team. Penn State will be no exception in 2021, as it lost five players from last year’s squad.

But to fill their void, coach Jeff Cook recruited five new student-athletes to the team. Regardless, a core group of returners will be leaned on to guide Penn State to more wins this season.

Here are a few players to keep an eye on in the 2021 campaign after a season-opening 3-2 win over Maryland.

Penn State has fielded many strong defenders over its program’s history, but one that stands out and has been relied on for a number of years is Brandon Hackenberg.

The redshirt senior has elected to come back for one more season in Happy Valley despite being selected by Orlando City SC of the MLS.

He has totaled 45 games and contributed to 12 shutouts along with winning a multitude of awards and honors during his time with the blue and white.

Hackenberg was named first team All-Big Ten in his 2019 season. In the same year, he also earned third-team All-North Region honors from the United Soccer Coaches.

He has been a key player on the defensive side of the field, and Penn State will look to see him continue that production in his fifth year with the team.

Sophomore Alex Stevenson made quite the first impression during his freshman season in 2019, playing in all 19 games.

He was a key member of the blue and white’s backline while starting in 11 games.

Stevenson also contributed to Penn State’s offense and netted his first career goal as a Nittany Lion against Stony Brook in September, which also happened to be the eventual game-winning goal.

After such a strong first year with the program, Nittany Lion fans should expect to see Stevenson on the field even more in 2021.

Stevenson didn’t register a stat on the offensive side of the field but played 76 minutes of action against Maryland in the first game of the season.

Despite the snow, Penn State did not come out frozen in its season opener versus Maryland.

Liam Butts is another sophomore who made a strong impact on the pitch during his first season in 2019.

He started 16 games and appeared on the field for all 19 games. Butts also won multiple awards, garnering Big-Ten All-Freshman honors and once earning Big Ten Offensive Player of the Week in October.

Butts was considered a top-15 freshman player by TopDrawerSoccer and contributed to nine of Penn State’s goals. Five of his goals in 2019 were of the game-winning variety.

Butts contributed to many wins for Penn State in 2019, and he will likely have more opportunities this season as a featured forward in Cook’s squad as the campaign progresses.

The sophomore wasn’t his usual self in the Nittany Lions’ opening win over the Terrapins, registering just one shot on goal, but he'll have plenty of chances to strike back in the upcoming slate.

Kris Shakes was a star in goal last season and protected the net to produce four Penn State shutouts.

The Nittany Lions will likely put Shakes between the pipes even more in 2021 after he held a 0.691 goals-against average in 10 starts, which is the sixth-best mark at Penn State since 1970.

He made a difference early for the Nittany Lions in their season opener against Maryland, tallying four saves in the one-goal victory.

Junior Seth Kuhn spent his freshman season playing at Duke and then made the transition to Happy Valley to become a Nittany Lion in 2019.

Kuhn stood out at Penn State immediately, as he played in all 19 games and started in all but one.

On the offensive side of the ball, Kuhn also stood out, as he had the second-most assists on the team with five and totaled 1,333 minutes on the pitch.

Kuhn once again showcased his dependability in the season opener against the Terrapins, being one of just three Nittany Lions to play the full 90 minutes.

Penn State's first victory of the season has propelled it to a higher ranking.

Penn State’s quick start was enough to carry it to victory over Rutgers.

Penn State’s quick start was enough to carry it to victory over Rutgers.

Morgan Boll is a men's soccer reporter for The Daily Collegian. She is a freshman studying broadcast journalism.