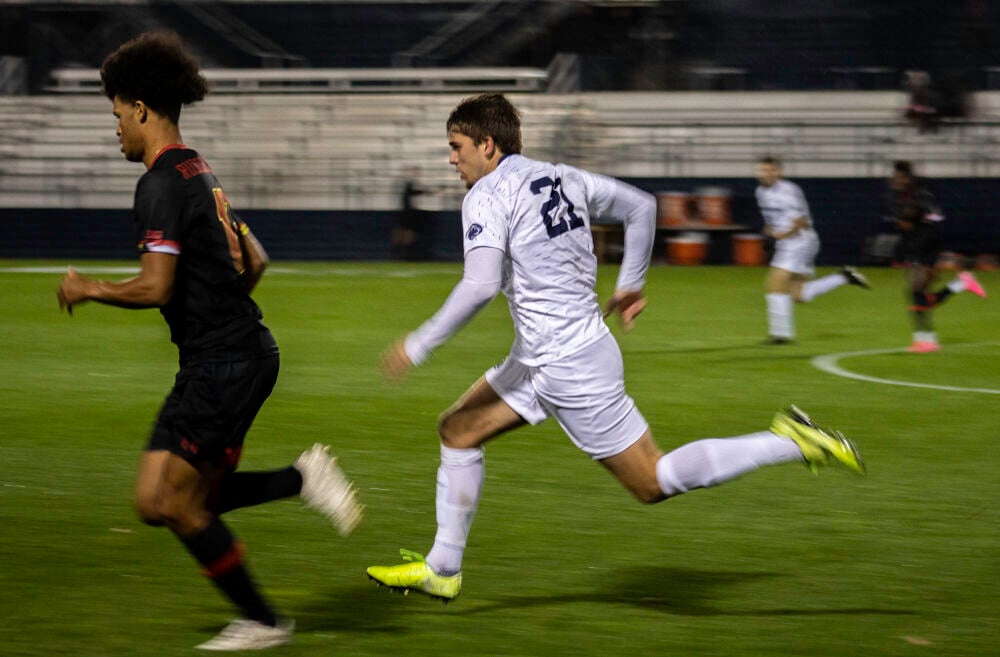 Midfielder Kyle May (21) chases after the ball during the Penn State vs. Maryland game on Tuesday, Oct. 26, 2021 in University Park, Pa.  The Nittany Lions defeated the Terrapins 3-2 in an overtime game. 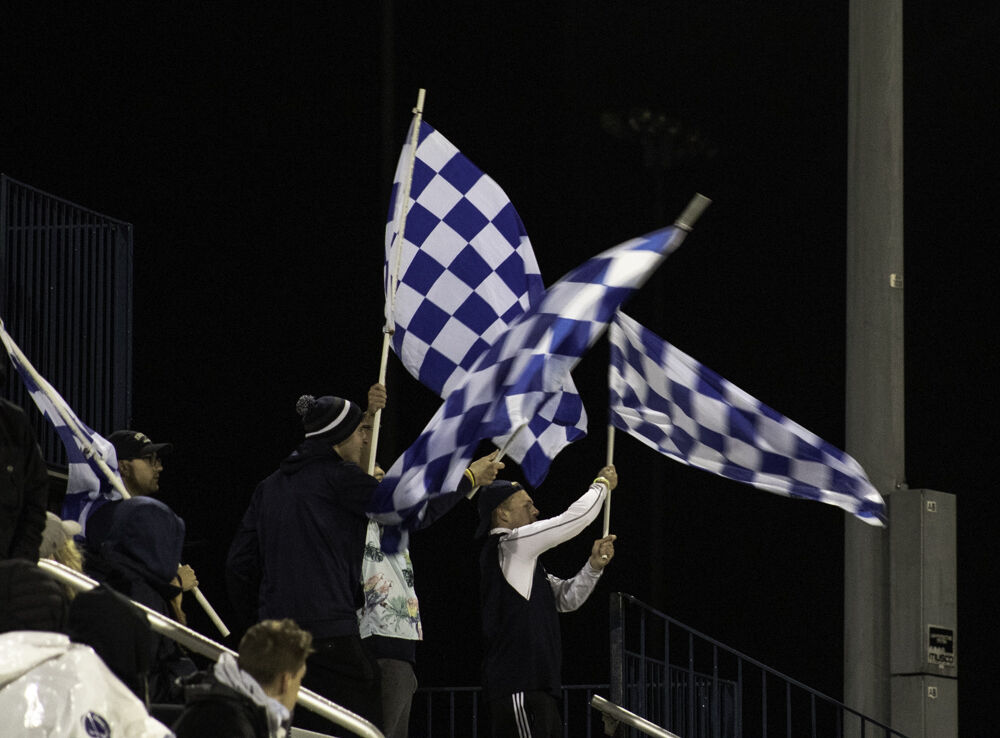 Penn State men's soccer fans celebrate a goal scored by waving blue and white flags in the stands during the teams game against Maryland on Tuesday, Oct. 26, 2021 in University Park, Pa.  The Nittany Lions defeated the Terrapins 3-2 in an overtime game.

Penn State easily handled the No. 4 seed Michigan in the semifinals advancing to the Big Ten Tournament Championship on Wednesday.

A big part as to why Penn State was able to beat down on its Big Ten rival was strong team-play in the first half.

The dominant performance in the first half across the field by both the offense and the defense were key factors as to what allowed the blue and white to finish the match on top.

It didn’t take long for Penn State to bear its claws as the first goal of the match sneaked by the outstretched arms of the Michigan keeper off of a free kick in the 12th minute.

Senior midfielder Seth Kuhn got things started as he took the shot off the free-kick after a quick touch by sophomore forward Peter Mangione.

After a slow start to the season for Kuhn, not having any goals until the second to last match of the season, No. 10 has hit his stride.

The goal in today’s match marks the fourth goal by Kuhn in the same amount of games keeping fire on the offensive side of the ball at the perfect time for Penn State.

“I just think it's huge as Seth has shown he can step up under pressure,” Cook said. “That kind of depth of attacking threats is really what makes us a dangerous opponent.”

Privett’s goal showed just how commanding Penn State’s grip was on the game, especially on the offensive side, as a-would-be cross into the middle of the box by Privett found its way into the back of the net.

Backing the two goals it scored, the Nittany Lions were able to put pressure on the Michigan defense with eight shots in the first half alone.

The simple eye test could have told you that Penn State was going to win this game based on its first-half play as it seemed like the ball never made its way onto Penn State’s defensive third.

Possession was clearly won by the blue and white allowing it to get as many chances as it did in the first half and gain an early lead.

However, in recent matches, the Nittany Lions have seemed to take their foot off the gas in the second half allowing for their opponents to get a second wind.

Today’s match was no different as the Wolverines more than doubled their shot attempts from the first half with 12 total shots along with seven corners in just the second half.

Although Penn State did have a two-goal lead by the time the whistles blew to mark the second half, that was no excuse for the blue and white to take its foot off the gas.

To the fans in the bleachers watching, Penn State visibly had let up a little in the second half, and it had two fewer shots than it did in the first half.

Even with Penn State putting fewer shots on goal in the second half and allowing Michigan to have more chances, the home side, in its coach’s eyes, won by more than the score showed.

“To me, it's about finishing the chances we create. I think today, we created more scoring chances in the second half than we did on Sunday against Michigan State,” Cook said. “You’ve got to punish your opponent, and we had a few moments, even in the first half, maybe to go up a third goal.”

Penn State will meet Indiana in the Big Ten Tournament Championship, a rematch of last year’…

It’s another year and another Big Ten Championship appearance for Penn State.

Andrew DelSignore is a men's soccer reporter at The Daily Collegian. He is a sophomore majoring in journalism.