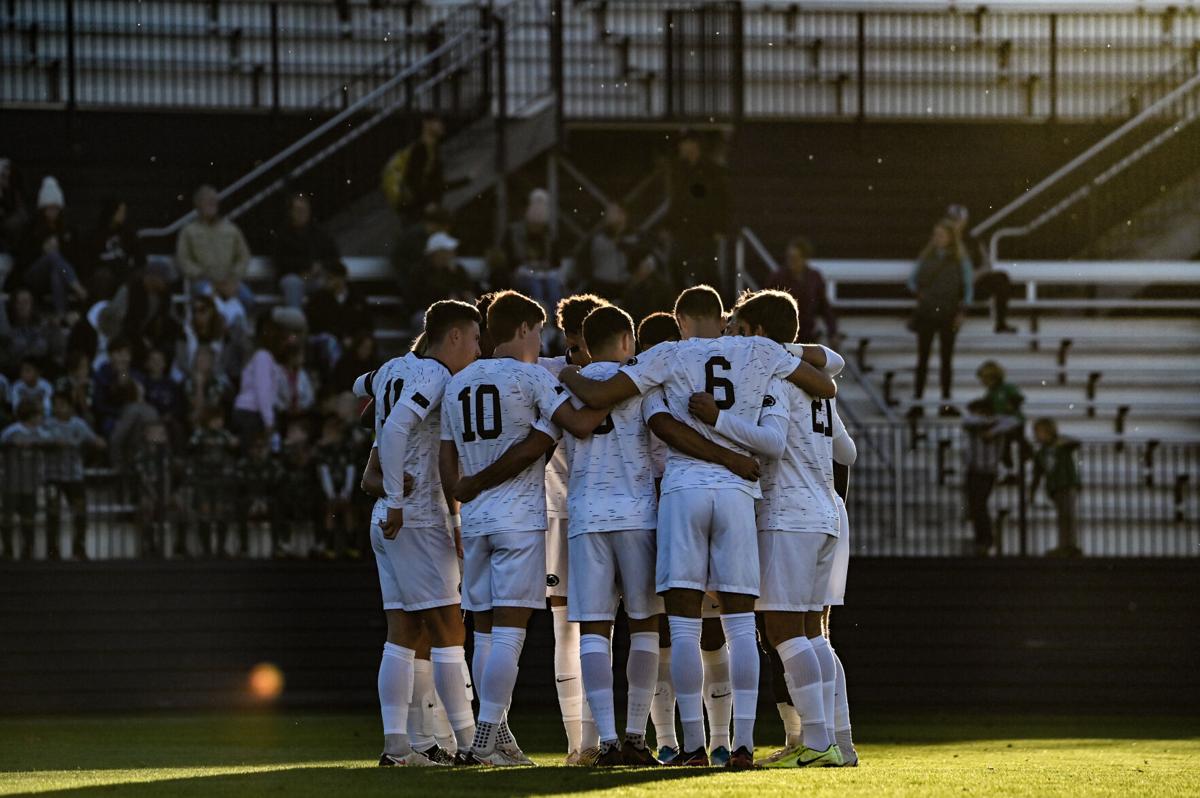 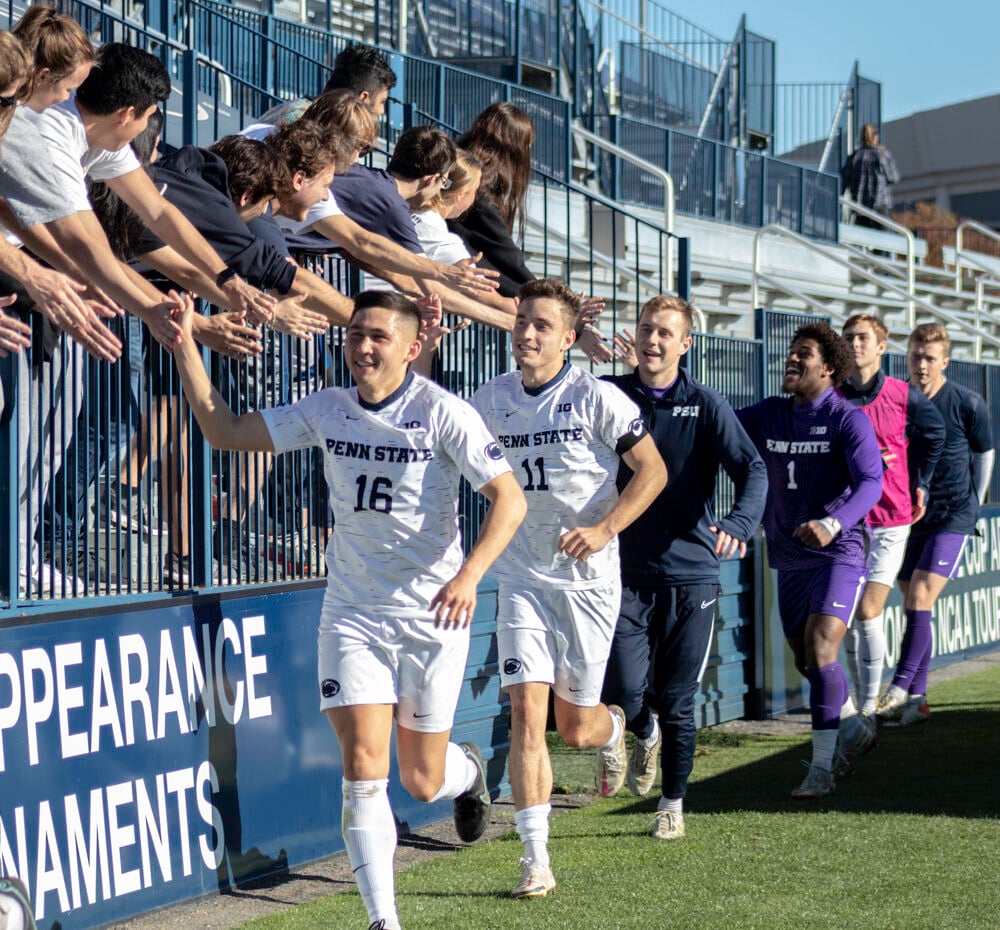 Penn State avenged its Big Ten Championship loss from last season by dominating Indiana in this season’s finals with a statement victory over the Hoosiers to lock in a place in this year’s NCAA Tournament.

The blue and white bested the Hoosiers 3-0 to claim its second piece of silverware this season in front of a home crowd at Jeffrey Field.

The weather matched Penn State’s jerseys as flurries fell from the sky as the temperature dropped below 40 degrees, but this change of weather did not stop the action from starting early.

Junior keeper Kris Shakes kept his clean sheet streak alive, and in the first two minutes of the match, Shakes made a tremendous save off an Indiana shot from within the Penn State box.

The stellar play from Shakes in the net was tested for a majority of the first half as Indiana had firm control with its constant pressure on Penn State’s defense.

Taking five shots in the first 15 minutes without a response from Penn State on the offensive end, Indiana made its presence known right out of the gates.

Within a minute of getting subbed in, he was able to take the ball into Indiana’s 18-yard box leading to a shot from senior midfielder Seth Kuhn that deflected off a Hoosier and ended up in the back of the net.

As the score tipped in Penn State’s favor 1-0, so did the momentum as a great pass from Kuhn to Peter Mangione into one-on-one opportunity with the junior keeper Celentano who made a great diving save.

In the second half, neither team came out of the locker room with little to separate the two teams.

This changed as Evans took a defender one-on-one and crossed the Hoosiers opening up a lane for him to knock a shot into the right corner of the net making the score 2-0.

For the entire rest of the second half, Indiana was looking for some sort of goal to get it back into the match but was unable to find it.

Penn State delivered the dagger with five minutes left in the match as redshirt senior midfielder Pierre Reedy put the game away with a goal off a Mangione assist.

Here are some key takeaways from today’s match.

Kings of the Big Ten

With a Big Ten Championship now under Penn State’s belt, the blue and white can take the crown and the title of the best team in the Big Ten in 2021.

Not only did Penn State take down the No. 3 seeded Indiana for the Championship after losing to it in last year’s finals but it also dominated its opponents in the quarter and semifinals.

Taking down both Michigan State and Michigan to get to the trophy game seemed like a breeze for the Nittany Lions as they put up two goals against both squads as well as shutting them out.

Penn State not only dominated each round of the Big Ten Tournament but also dominated the regular season as out of the eight matches it played another Big ten opponent it won six of them.

One of the blue and whites’ losses came to Indiana in the regular season, but Penn State turned the tides in the championship match, destroying the Hoosiers and taking down Indiana for the first time since 2015.

With this win today, Penn State takes not only the Big Ten Tournament Championship but the throne of the Big Ten conference as well.

Shakes cemented his spot in goal for Penn State this year as he is currently on a four-game clean sheet streak.

Although Shakes didn’t start the first match of the season, he has started every other match besides one claiming the starting role for good reason as he has eight clean sheets over the course of the season.

When No.1 is in net, the blue, and white feel as if it can win any game as the 5-foot-11 keeper has no trouble getting to any and all shots that come his way between the posts.

Sunday’s match was no different for the Penn State shot stopper as he made four saves to deny Indiana in the first half and then held the Hoosiers at bay in the second facing 12 total shots.

Although Kuhn had not had a goal in the regular season until the second to the last match, it came at the perfect time and started a great offensive streak as coach Jeff Cook and company entered the postseason.

Kuhn’s first goal came at just the right time against the then-ranked No. 7 Maryland helping Penn State upset the Terrapins 3-2 in overtime.

This goal led to a total takeover by No. 10 as Kuhn put not one, but two balls in the back of the net against Wisconsin helping Penn State get the No. 1 seed in the Big Ten Tournament.

Kuhn had now had three goals in the last two games, but his streak only improved from there as he scored in the semifinal match against Michigan.

In the final against Indiana, the Penn State talisman extended his streak to five goals in the last five matches to help complete the Nittany Lion’s conference double in Big Ten Titles.

Penn State put the finishing touches on its prolific Big Ten season in 2021 on Sunday.

Andrew DelSignore is a men's soccer reporter at The Daily Collegian. He is a sophomore majoring in journalism.