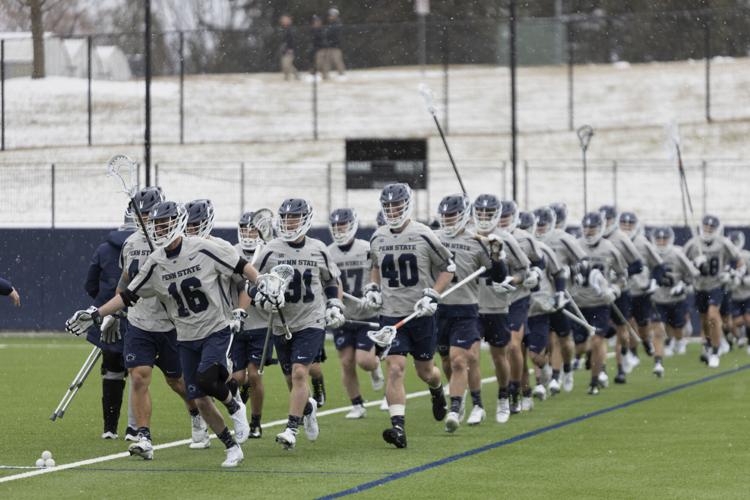 The Penn State Men's Lacrosse team runs onto the field at Panzer Stadium on Saturday, Feb. 26, 2022. The Nittany Lions beat the Yale Bulldogs 10-6. 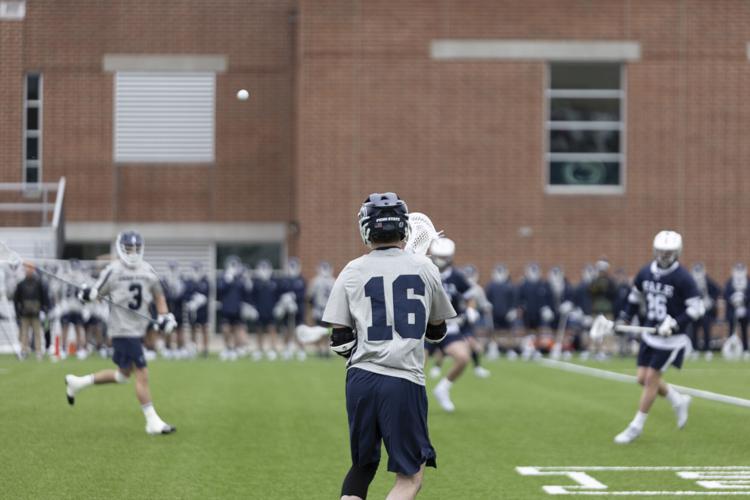 For Penn State, wins this season certainly have been hard to come by.

In a Senior Day effort against Michigan, however, that wasn’t the case Friday.

The blue and white and the Wolverines each came into the matchup riding lengthy losing streaks, and one team came out victorious while the other went home with its streak extended.

The Nittany Lions prevailed by a final score of 9-8 in overtime against Michigan in the final regular-season game at Panzer Stadium in 2022.

The graduating seniors were honored in a pregame ceremony with many parents and other family members in attendance.

Coach Jeff Tambroni was emotional after a massive win for his graduating class, and he said it was important to get his seniors a win at their last “guaranteed” game at Panzer.

“It’s a good feeling, and I’m proud and happy for them,” Tambroni said. “To see these guys come back, the character and resolve to win it like that at the end hopefully will give us a boost as the season goes on.”

One thing this graduating class can say is that they got the chance to play in a Final Four in the NCAA Tournament.

The Nittany Lions lost to Yale in a close semifinal matchup that season, but the experience Tambroni’s players earned was invaluable and carried over to the next three seasons.

With the 2020 campaign cut short and the last two seasons not going quite the way Tambroni would’ve hoped, it’s hard to say what the blue and white could’ve accomplished under different circumstances.

The lessons and experiences, however, taught to the younger players on the roster from this group of seniors was vital for the team’s development, Tambroni said.

“The way this group handled themselves on the field, in the classroom and on campus — it’s a terrific group of men,” Tambroni said. “Their impact is going to be solidified in character and the standard they’re leaving behind in terms of what it means to be a part of Penn State.”

With two games remaining in the regular season, the Nittany Lions now sit at 3-8 overall while the Wolverines fall to 7-5.

Penn State got off to early lead off goals from redshirt senior midfielder Dan Reaume and redshirt freshman Hudson Bohn.

However, the Wolverines fought their way back into the game in the third and fourth periods off a big individual effort from sophomore midfielder Justin Brown, who had five goals despite not starting.

For the players, this win meant more to them than just improving the team’s record, as they now have some momentum heading into the final stretch before the Big Ten Tournament.

The Nittany Lions have Johns Hopkins and Rutgers left on their regular season schedule. Both games will be on the road for the blue and white.

Despite what has been a tough season for Tambroni’s squad, the attitude hasn’t changed in the locker room, and fifth-year senior midfielder Brian Townsend said the team is “ready to go every Monday.”

“Lots of hard time and work on this field over the last few years,” Townsend said. “To go off with a win means the world to everyone — that’s what we preached all week.”

The determination and will for this year’s blue and white squad cannot be overlooked.

With injuries and other absences playing a large role this season, the Nittany Lions have stuck together through the hard times and battled their way to a senior night victory after a slate of poor results.

For junior midfielder Mac Costin, who also scored twice in the victory, this was another big reason to get a win for the seniors on “one of the biggest games of the year.”

“We’ve come a long way this season,” Costin said, “And obviously we don’t have the best record, so we played for our seniors and came together as a team.”

Sitting in the driver’s seat for much of the night offensively, Penn State may not have clos…

After an Senior Day victory over Michigan in overtime, Penn State had two of its players garner spots in the Big Ten's weekly awards.

Penn State football to face Michigan at noon in Michigan Stadium on Oct. 15

Penn State will take on Michigan after a bye week this week, and that game now has a kickoff time.