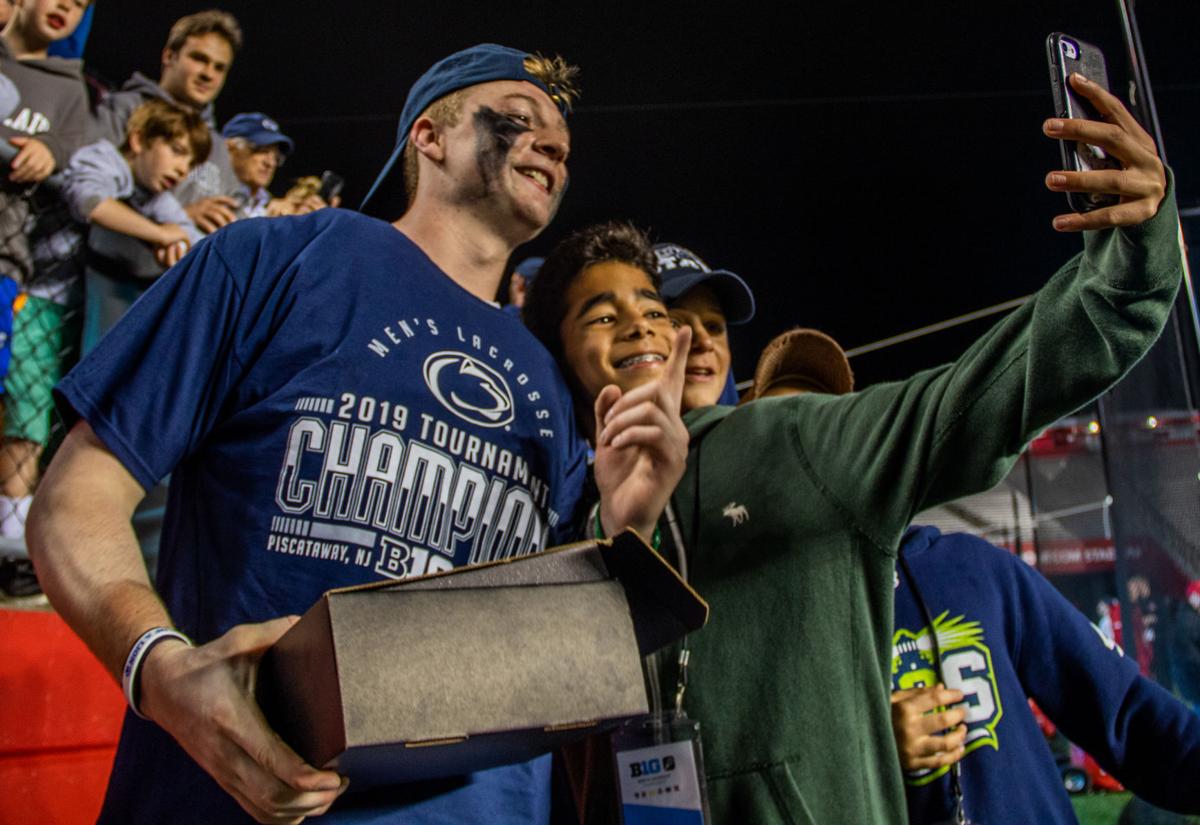 Mac O’Keefe (3) takes a selfie with a fan after winning the Big Ten Tournament at HighPoint.com Stadium in Piscataway. The No. 1 seed Nittany Lions defeated the No. 2 seed Blue Jays 18-17 in overtime. 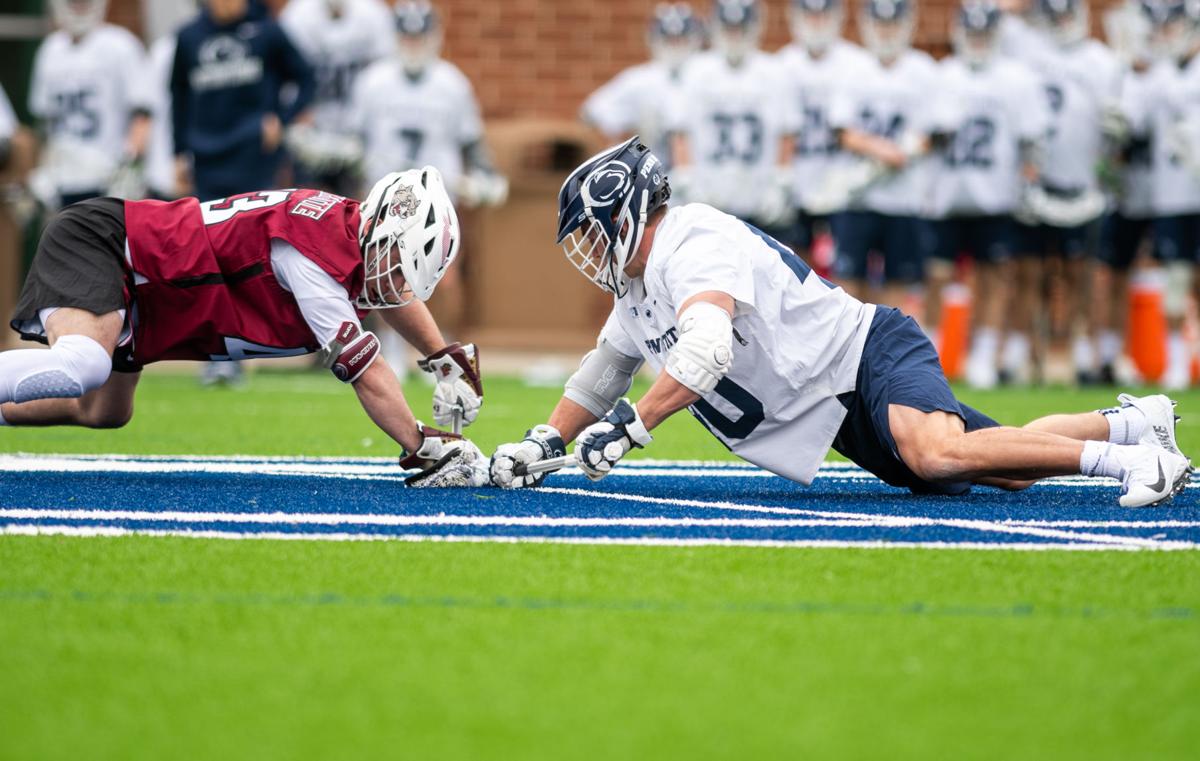 Penn State face-off specialist Gerard Arceri (40) takes the opening faceoff of the men’s lacrosse game against Lafayette at Panzer Stadium on Saturday, Feb. 1, 2020. The no. 1 Nittany Lions defeated the Leopards 16-9.

With their last regular season behind them, Mac O’Keefe and Gerard Arceri weren’t in the news for their efforts on the field for Penn State Monday night.

Both Nittany Lions were selected in the latest Premier Lacrosse League College Draft, with O’Keefe going in the first round and Arceri going in the fourth and final round.

The selections introduced two more members of the blue and white to the PLL ranks, as the attackman and faceoff specialist combo joined Penn Staters Grant Ament, Chris Hogan, Chris Sabia and Drew Adams as Nittany Lions currently on a PLL team’s roster.

Set to join two squads that underperformed in group play of the 2020 PLL Championship Series — Chaos LC for O’Keefe and Atlas LC for Arceri — here’s how the two players fit into their respective franchises.

At the end of group play in the two-week Championship Series last summer, it seemed as though all hope was lost for Chaos.

Coach Andy Towers’ team had gone winless in its five-game slate up to that point with two one-goal losses to its credit.

But that’s why the postseason gets played.

Chaos put up a PLL season-best 19 goals against Chrome LC in its first elimination game, stamping its ticket to the four-team semifinal round.

Then, it defeated Ament’s Archers LC to officially move on to the 2020 PLL Championship with one team standing in its way: the powerhouse Whipsnakes LC.

Whips had run the table in group play and in the playoffs, becoming the title favorite again a season removed from winning the first-ever PLL Championship in 2019.

Led by 2017 Tewaaraton Award winner Matt Rambo and newly minted PLL attackman Zed Williams, Whips scored 12 goals of its own while holding Chaos to a measly six points in the final game of the season for both clubs.

The six points, in fact, were the lowest point total for Chaos in the team’s history — but now it’ll have the most potent goal scorer in Division I men’s lacrosse history.

The team selected O’Keefe with the No. 7 overall pick in Monday’s draft, making him the third attackman selected behind Cornell’s Jeff Teat and Duke’s Michael Sowers.

It’s unclear just how much run O’Keefe will get with Chaos right off the bat, as it boasts a studded line of Austin Staats, Josh Byrne and Curtis Dickson on the offseason attack group.

There is some clarity, though: O’Keefe will certainly make a run as one of the premier 2-point shooters in the league.

Watching the Syosset, New York, native’s highlight reel, it seems that almost every one of O’Keefe’s shots come from at least 15 yards out.

Guys like Redwoods LC’s Sergio Perkovic have made the 2-point shot their main claim to fame, and there’s no doubt O’Keefe can replicate that progression.

If there was one positive takeaway from Atlas’ 1-4 campaign in the 2020 bubble, it was faceoff specialist Trevor Baptiste's consistency at the X.

Baptiste excelled at that specialist spot — and the stats don’t even tell the full story.

The former Denver standout’s 54% faceoff win percentage was skewed by one bad game against none other than Whips’ FOGO Joe Nardella.

Baptiste went 5-for-20 in the affair in an outlier performance that hurt his season totals.

But that poor game aside, Baptiste cemented himself as Atlas’ feature faceoff guy — and that won’t be changing anytime soon.

Even so, Atlas used the last of its six picks on a faceoff specialist out of Happy Valley in Arceri.

Arceri has gone 119-for-208 on the faceoff in his fifth season under coach Jeff Tambroni, good for a 57% faceoff win percentage.

With the most faceoff wins in Penn State program history, Arceri has been the workhorse for each of the past five seasons for the blue and white.

With Atlas this summer, however, he’ll be able to maximize his efficiency in short spurts behind Baptiste.

In recent weeks, Penn State has been able to flip the script by winning instead of losing.