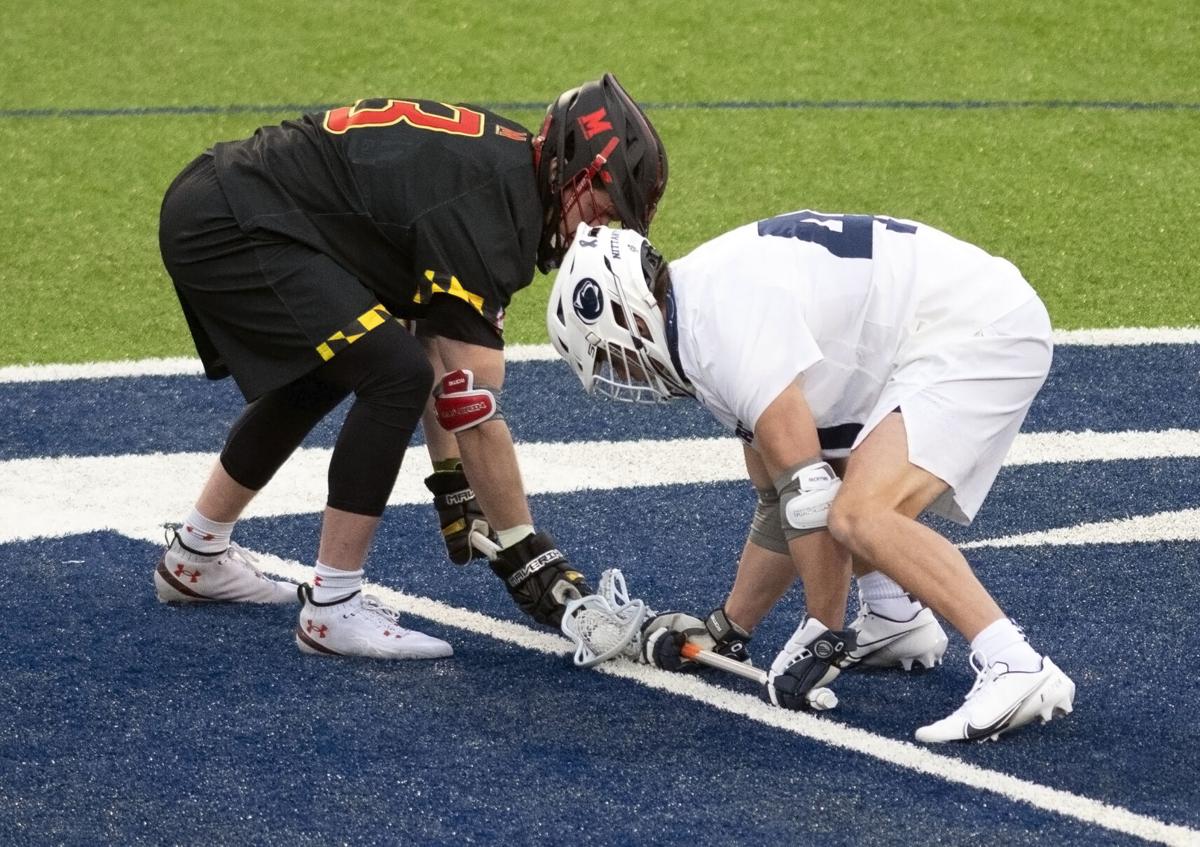 Penn State’s Gerard Arceri (40) faces off against Maryland’s Justin Shockey during the Penn State men’s lacrosse game against Maryland on Friday, Feb. 26, 2021 at Panzer Stadium in University Park, Pa. The Nittany Lions lost to the Terrapins 13-7. 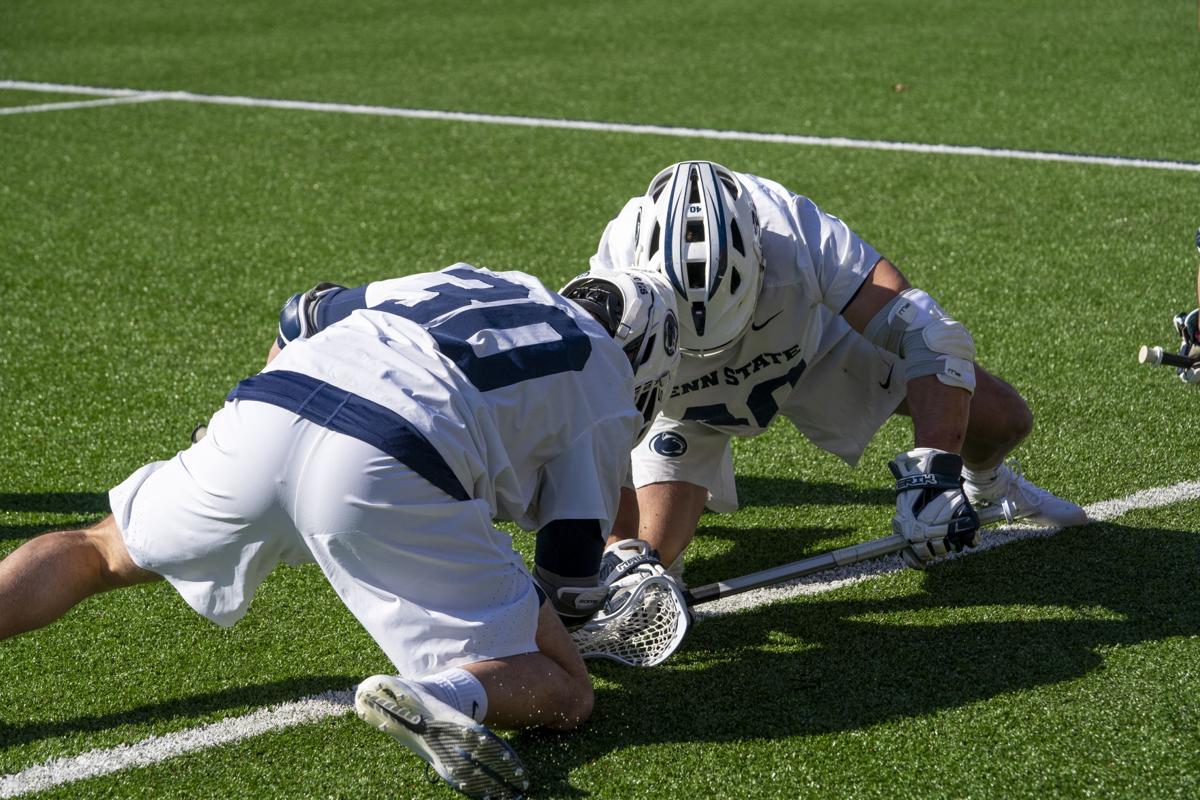 After each goal — whether it was in a scrimmage, the regular season or the Final Four — Penn State faceoff specialist Gerard Arceri had a defined routine in the first four years of his career.

He would make his way to the faceoff-X, get down on one knee, set his grip and look to claim possession of the ball to give the Nittany Lions an offensive opportunity.

The NCAA Playing Rules Oversight Panel approved in July an amendment to the faceoff rules in an effort to prevent stalemates and clamping, disallowing the knee on the ground and the motorcycle grip — when the player holds the stick with both palms down.

Instead, specialists must now keep everything except their feet, gloves and stick off the ground, effectively ending the one-knee stance.

Arceri and his peers must also hold their sticks with one palm facing up, as well.

And with his first true competition coming nearly seven months after the rule was officially changed, Arceri saw a learning curve in the first few contests of his fifth season.

“At first, it was definitely a weird thing, especially in talking with the other faceoff guys on the team,” Arceri said directly after Penn State’s 13-7 loss to Maryland. “None of us really used standing up as a primary move.”

In his first two games against Rutgers and Maryland, respectively, Arceri went a combined 22-for-34 at the faceoff-X.

But to coach Jeff Tambroni, it isn’t necessarily the numbers that tell the whole story for the specialists still mastering a new grip.

“The statistics I’m probably less worried about,” Tambroni said in his weekly media availability. “There’s a lot of times when you just can’t coordinate, because the [opposing] faceoff guys are just so good at getting the ball to themselves and picking the ball up — you’ve just got to take your medicine, go back and play great defense.”

In the matchup with the Buckeyes, Arceri lined up against 2018 Big Ten Freshman of the Year Justin Inacio, who has posted a career faceoff win percentage of 63%.

And even with the new rules in place to ensure specialists are continuously moving, Tambroni still sees the position as top heavy.

“The best faceoff guys still dominate possession, and they still win them on their own. That hasn’t changed much at all,” Tambroni said. “When the ball starts to squirt out in a direction where it’s more 50/50, wings are more involved and there’s more collaboration between the six guys that are all going after the same thing. That’s where the greatest impact is.”

It wasn’t just Tambroni who has seen more 50/50 balls in the first three games of the Big Ten season.

Analysis | Despite win No. 1, Penn State men’s lacrosse still has areas to clean up

It took long enough, but Penn State has thrust itself into the win column.

“As I’m going along, I’m starting to realize it’s really not that much different,” Arceri said. “But there are definitely a lot more 50/50 scrums, and the wings get a lot more involved.”

While the new protocols have been a change of pace for Arceri and the other blue-and-white faceoff specialists, one Penn State alumnus and eventual Major League Lacrosse MVP appreciates the rule even apart from scheme aspects.

“I like the standup rule as a guy who is dealing with all of the pain and injuries from my career on the knee,” former Nittany Lion faceoff specialist Greg Gurenlian told The Daily Collegian. “These kids are going to get to play forever now.

“If it gets officiated correctly, then these rules are outstanding for the longevity of these athletes and they do have the desired effect.”

Gurenlian — also known as “The Beast” — ranks third in Penn State history in total faceoff wins with 508, behind just Arceri and Danny Henneghan.

Before the MLL was absorbed by the Premier Lacrosse League in December 2020, Gurenlian was the only faceoff specialist to win the league’s MVP award — earning the prestigious trophy in 2015.

In Gurenlian’s college days more than a decade ago, he noticed one quality of all top-notch faceoff specialists.

But in the contemporary age, especially with the new rules, the six-time MLL All-Pro sees a larger pool of talent getting shine at the faceoff-X.

“You have to be a much more well-rounded guy to be an elite-level faceoff guy now.”

As Arceri and his teammates continue to earn reps, Gurenlian has two words of advice for his Nittany Lion successors at the faceoff specialist position.

For the first time this season, a Penn State player picked up a weekly national honor Tuesday.

Penn State's graduate attackman Mac O'Keefe has made the Tewaaraton Award Watch List for the remainder of the 2021 season.

Twenty years ago, NBA guard Allen Iverson delivered one of the most memorable press conferences in sports history.

Andrew Porterfield is the digital managing editor for The Daily Collegian. He is a junior studying digital and print journalism with a minor in sports studies.

How did former Penn State football players do with their new teams this week?