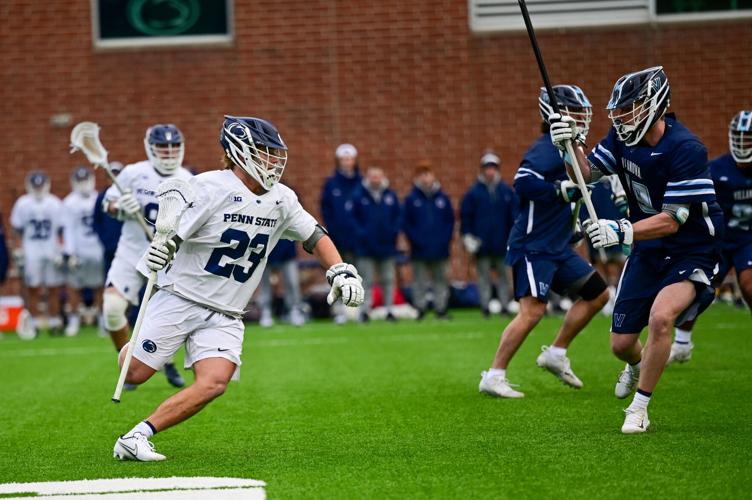 Midfielder Mac Costin (23) works against a Villanova Long-Stick Defender. Penn State would go on to lose 13-12 against Villanova at Panzer Stadium on Feb. 12, 2022. 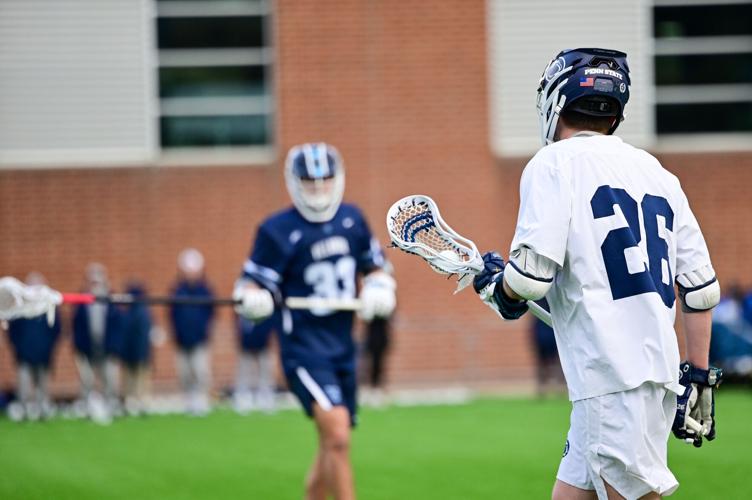 Midfielder Dan Reaume (26) works against a Villanova Long-Stick Defender. Penn State would go on to lose 13-12 against Villanova at Panzer Stadium on Feb. 12, 2022.

Sitting in the driver’s seat for much of the night offensively, Penn State may not have closed out its matchup with Michigan as it would have liked to, but it got the job done on one of its most important nights of its season.

The blue and white ended a five-game skid in a 9-8 overtime victory against the Wolverines on Friday evening at Panzer Stadium.

It was Senior Day in Happy Valley, and redshirt senior midfielder Dan Reaume made the most of his last home match opening with a goal just under a minute into the contest.

Penn State’s offense looked to continue the fast-paced start, utilizing ball control and winning faceoffs to keep the Wolverine defense on its heels.

After a goal from Justin Brown, Michigan pulled within one with five minutes and 21 seconds remaining in the first quarter.

Junior defenseman Jack Posey would then sneak one through the net to give Penn State a 3-1 advantage after the first frame.

The offensive pace would slow down, but fifth-year senior midfielder Jack Kelly found the back of the net halfway through the second frame.

Six different Nittany Lions scored in the first half, as goals from Michael Faraone and Mac Costin lifted Penn State to a 6-2 lead heading into the locker room.

To start the second half, Penn State mirrored what it did in the first quarter, as sophomore Mark Sickler scored with 33 seconds into the third frame.

The blue and white got a little too comfortable with a 7-2 advantage, as Michigan received goals from Ryan Schriber and Brown again to put the Wolverines within three.

In the waning seconds of the third quarter, Reaume snuck one through the goal to put the Nittany Lions ahead by four.

It was all Michigan in the final frame, as it would get a goal from star attackman Josh Zawada with just over three minutes left to play to knot the game up at eight apiece.

In the overtime period, the Penn State offense returned back to their aggressive attack, as Costin fired off a shot just as the shot clock was about to expire to give Penn State their first victory since Feb. 26 against Yale.

Penn State coach Jeff Tambroni paid praises to Michigan goalie Shane Carr after the game, crediting him for his 11-save performance amid the aggressive play from the Penn State offense.

“Their goalie is terrific,” Tambroni said. “I think he makes you think twice about shooting certain shots, and after a couple shots went in, he made probably six or seven saves.”

But for his players, Tambroni also said the win will boost confidence and morale for his squad, especially to the players who have had to play more minutes than expected because of injury.

Ultimately, an emotional win over a talented Michigan squad could be the key to reaching Tamrboni’s expectations and standards for his team.

“I hope this will just provide them a little confidence. Not necessarily because of what the scoreboard said, but when you win a game, maybe they could take a deep breath and get back to doing what I think they’re capable of,” Tambroni said.

For the game winning goalscorer, Costin, Penn State was due a big win, and this victory may have come at the best time to honor the veterans in the squad.

“For how hard we worked and practiced day in and day out, our hard work finally paid off with an overtime win,” Costin said. “We got it done for the seniors because we all know how hard they’ve worked for the past four or five years, so they deserve it and we got that for them.”

After dropping its last five games, Penn State was looking to fight its way back into the wi…

For Penn State, wins this season certainly have been hard to come by.

Penn State continues to slide as it enters a Tuesday afternoon game against in-state rival Pittsburgh on a four-game losing streak.

Penn State football to face Michigan at noon in Michigan Stadium on Oct. 15

Penn State will take on Michigan after a bye week this week, and that game now has a kickoff time.